Biden: US will have enough vaccine supply for all adults by end of May; states directed to prioritize teachers

Congressman-elect Van Drew to be sworn in Jan. 3
0 comments
Share this
{{featured_button_text}}
1 of 5 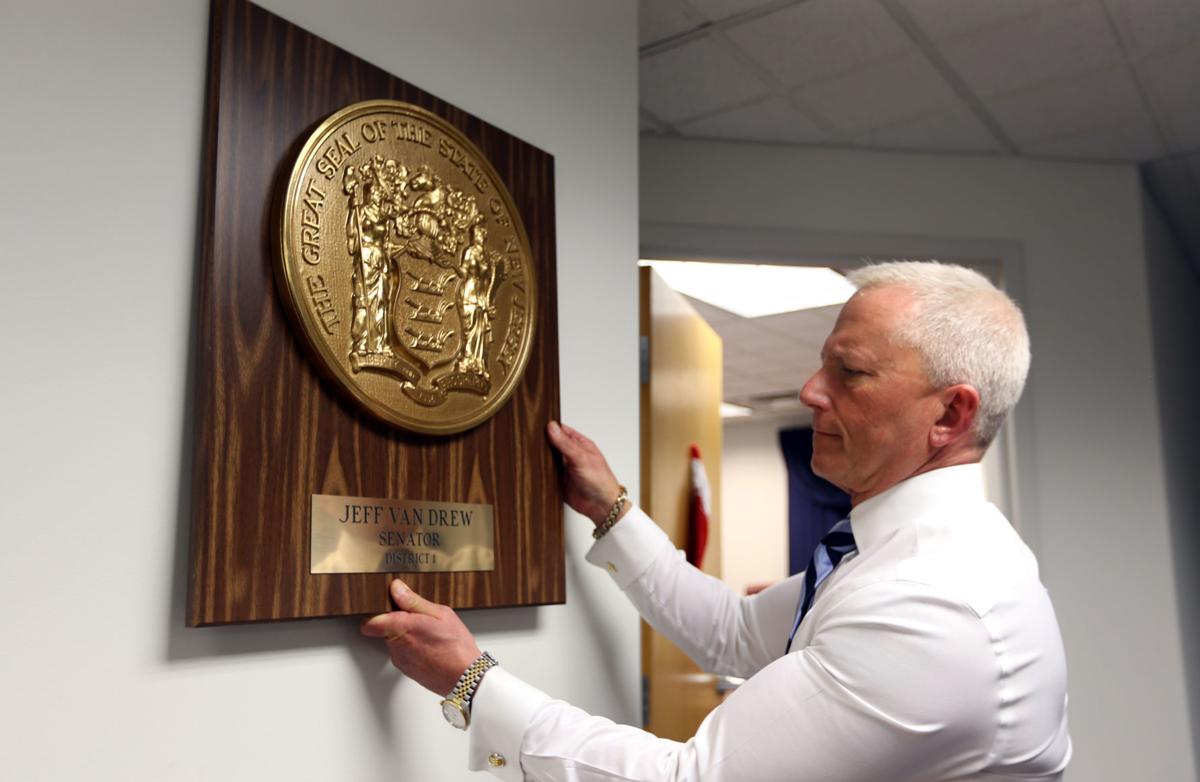 Congressman-Elect Jeff Van Drew, D-2, takes down a commemorative plaque with his former title on it, State Senator, given to him by Senate President Steve Sweeney. (Dec. 28, 2018) 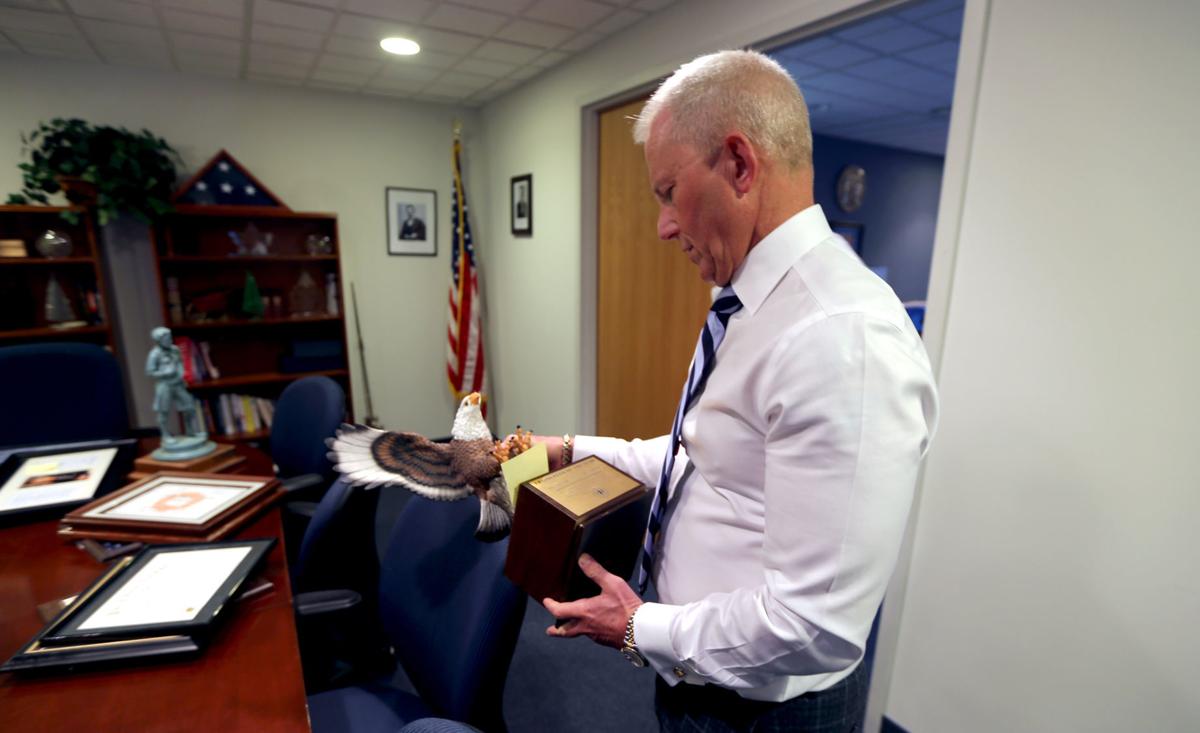 Congressman-elect Jeff Van Drew packs up mementos and awards from his 16 years in politics. Van Drew will be moving from his Senate offices in Cape May Court House and Vineland to his Congressional offices in Mays Landing and Washington D.C. (Dec. 28, 2018) 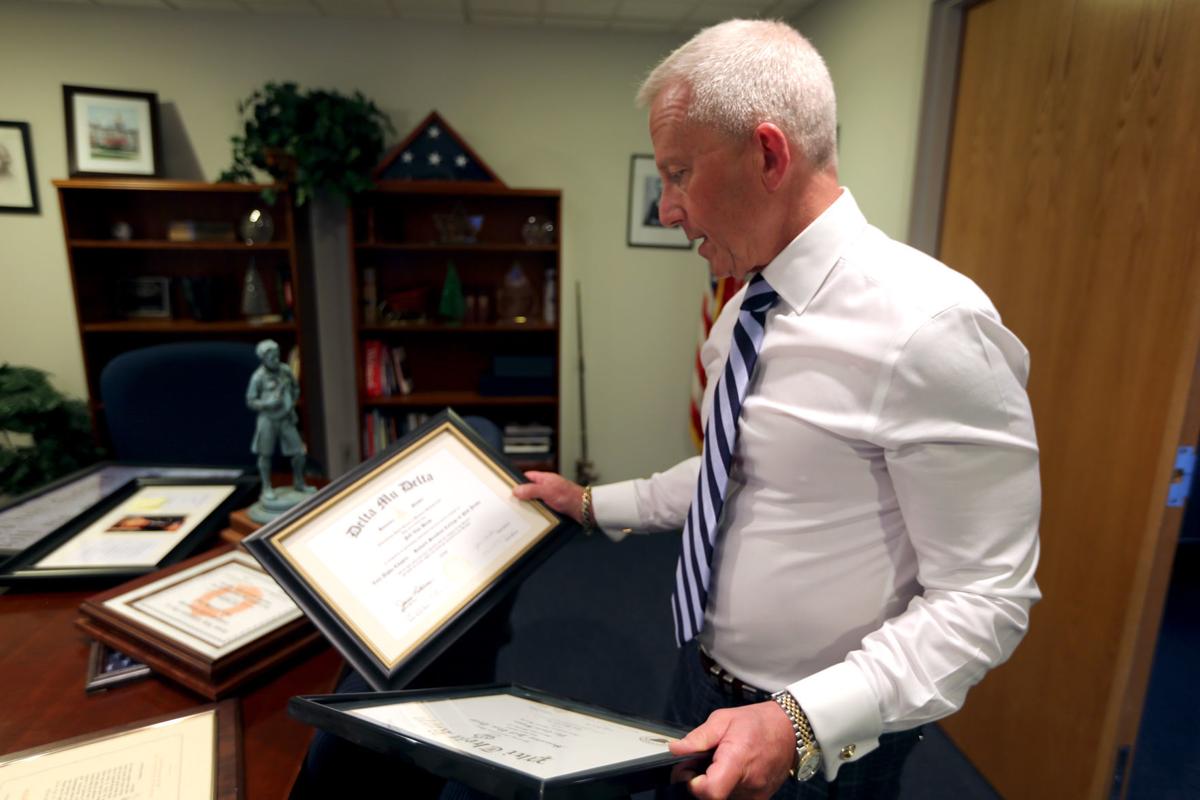 Congressman-elect Jeff Van Drew packs up mementos and awards from his 16 years in politics. (Dec. 28, 2018) 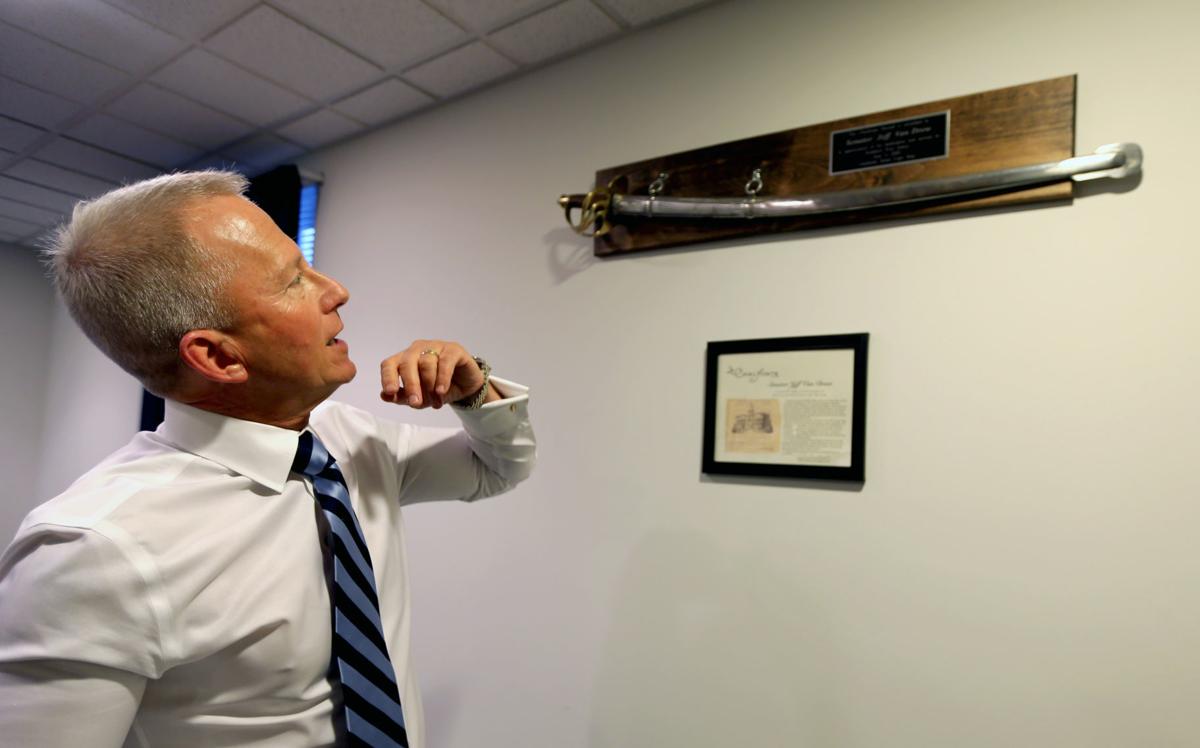 Congressman-elect Jeff Van Drew received the sword in his Cape May Court House office from the The Chalfonte Hotel in Cape May. It will move with him to his new congressional offices, either in Mays Landing or Washington. Dec. 28, 2018 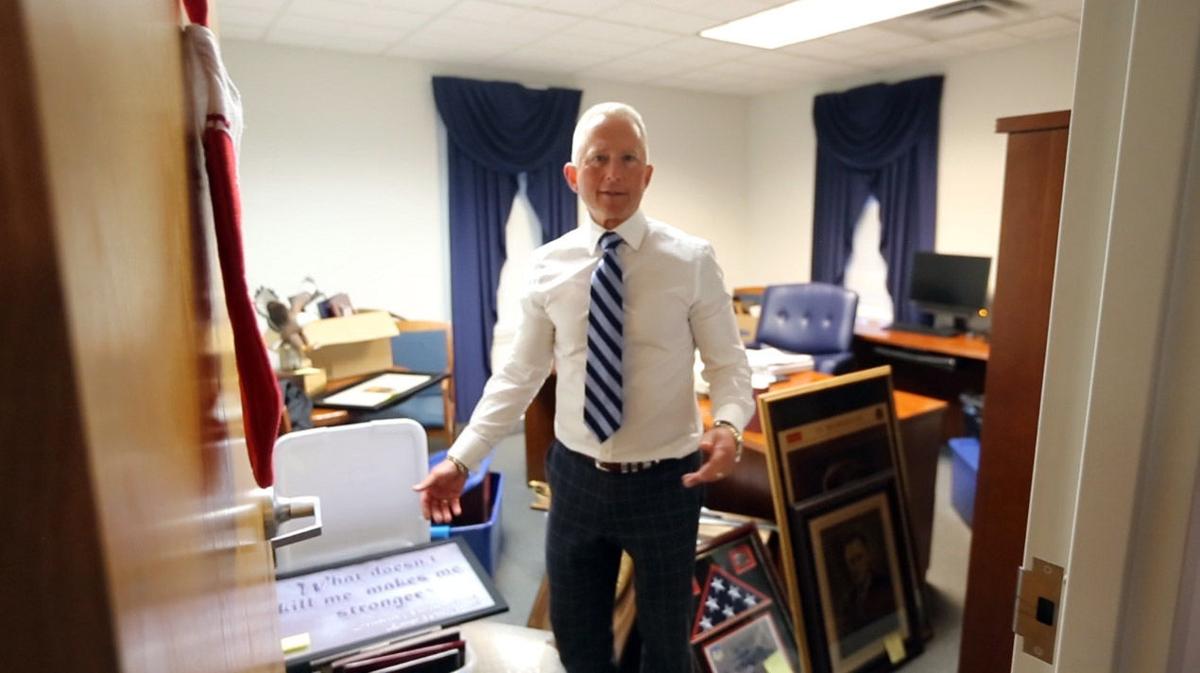 Congressman-elect Jeff Van Drew and his staff spent Friday packing up mementos, framed documents and awards he plans to move to his Mays Landing and Washington offices in the new year. Dec. 28, 2018

He and 84 other freshmen chose numbers on cubes from an old wooden box.

“Our number was not so great — it was 69,” said Van Drew, soon to be the Democratic representative for the 2nd Congressional District, which covers most of South Jersey.

The high lottery number meant that only 16 of 435 U.S. House members chose their offices after him, since freshmen are last in line to pick.

Van Drew — who describes himself as a moderate, with some similarities to his Republican predecessor, Frank LoBiondo — will be sworn in Thursday.

LoBiondo agreed the two have much in common, despite being from different parties. He attributed that to the nature of the district.

“The district is dominated by independents” who don’t tend to extreme political opinions, said LoBiondo. “At one time, independents outnumbered both parties put together.”

His advice to Van Drew?

“I always think if you do a good job, that’s the best politics,” said LoBiondo, who said some of his staff are staying on with Van Drew for a smoother transition for constituents. “When people call me for help, I have no idea what party affiliation they are.”

MAYS LANDING — U.S. Rep. Frank LoBiondo worked his way up in seniority during 24 years in th…

Van Drew has been getting ready for weeks, choosing and furnishing an office, finding a place to live in Washington, hiring staff and applying for committee assignments.

The lottery has been in place since members first got offices in 1908, according to the House historian’s website.

Before that, there was just a desk lottery for seats on the floor of the House.

Despite his lottery pick, Van Drew said he’s happy with the outcome.

His chief of staff, Allison Murphy, who has been with him for 16 years in politics in New Jersey and will remain his chief of staff in D.C., had spotted a large office of more than 1,000 square feet on the third floor of the Cannon Building.

What a government shutdown may mean for South Jersey

It’s a few doors away from the first office of Congressman William Hughes, the last Democrat to hold the seat from 1975 to 1995. Hughes was followed by LoBiondo.

Van Drew will find out his committee assignments in January but requested joining the natural resources and transportation and infrastructure committees.

“The one I’d definitely like to get is natural resources. There is nobody on the East Coast on that committee,” said Van Drew. “Yet it affects fishing, bag limits and everything else that goes with fishing.”

It’s also important for issues dealing with the oceans in general, he said.

With the Port of Cape May in his district — the fifth largest port on the East Coast — that committee will be vital, he said.

He may have to wait to get onto the transportation and infrastructure committee, which LoBiondo was on for years.

While committees are important, he intends to do plenty of work on issues like veterans affairs without being on the Armed Services committee.

“You can’t get every committee,” he said.

Back at home, Assemblyman Bob Andrzejczak, D-Cape May, Cumberland, Atlantic, is preparing to be nominated to succeed Van Drew for his unexpired term as state senator. The two have worked closely together representing the same New Jersey legislative district for years, sharing offices and staff.

“When I was getting into politics, I never foresaw myself taking that step,” said Andrzejczak. “But with Sen. Van Drew moving on, I’m happy for him and happy to keep doing work we have been doing.”

Meanwhile, Van Drew is pretty much ready to hit the ground running in D.C.

Murphy and other key staff members from New Jersey will transition with him. He has hired a communications director and staff to handle legislation and foreign affairs, he said.

But he will probably add to the D.C. staff once the job starts.

He picked his Cannon Building office furniture from a congressional warehouse that had some very old pieces in it, he said.

“They refurbish it. There’s furniture there, that underneath the leather, has horsehide,” said Van Drew. “It goes back a very long time.”

The D.C. office is about twice as big as his Washington studio apartment.

“It’s tiny, less than 500 square feet,” he said of the apartment. “It’s a place to lay your head, read a book, watch TV and get some sleep.”

Most weekends he’ll take the train back home to South Jersey for constituent meetings, events and to see his family, he said.

But don’t expect a lot of town meetings from him. They’re not his style, he said.

“Very often they are set up to make you look good or bad,” he said. “I want to be able to talk to smaller groups of people around a conference table, as I have done for many years. Or one on one.”

“I plan to have a very open policy with the press and everyone,” Van Drew added.

The Cannon House Office Building, where U.S. Rep.-elect Jeff Van Drew will have his office, is the oldest congressional office building. It was completed in 1908, for the first time giving members offices separate from their desks on the floor of the House of Representatives.

It is located at 27 Independence Ave. SE in Washington, just off the Capitol grounds near the U.S. Botanic Garden, and is a significant example of the Beaux-Arts style of architecture.

Phase 1 of the renewal of the Cannon building was recently completed, according to a press release from the Office of the Architect of the Capitol. Its historic rotunda has been returned to its original appearance, said Architect of the Capitol Historic Preservation Office Mary Oehrlein. The rotunda includes 18 Corinthian columns, an entablature, a coffered dome and double height windows that frame a picturesque view of the Capitol and grounds.

It was repainted to make the Rotunda look as if it was made of stone — similar to ancient Greek and Roman structures. The skylight, which was replaced during the project, now allows natural light to filter through the space, highlighting architectural details.

The Cannon renewal work will continue through the other wings of the building.

Source: Office of the Architect of the Capitol

Donohue back as Middle Township mayor

WASHINGTON — U.S. Rep. Jeff Van Drew, D-2nd, kept his promise to vote “no” on Nancy Pelosi for speaker on his first day in Congress, but she w…

Jeff Van Drew will not be on the ballot this year, but the Van Drew team will be, seeking to defend their seats representing New Jersey’s 1st …

Congressman-Elect Jeff Van Drew, D-2, takes down a commemorative plaque with his former title on it, State Senator, given to him by Senate President Steve Sweeney. (Dec. 28, 2018)

Congressman-elect Jeff Van Drew packs up mementos and awards from his 16 years in politics. Van Drew will be moving from his Senate offices in Cape May Court House and Vineland to his Congressional offices in Mays Landing and Washington D.C. (Dec. 28, 2018)

Congressman-elect Jeff Van Drew packs up mementos and awards from his 16 years in politics. (Dec. 28, 2018)

Congressman-elect Jeff Van Drew received the sword in his Cape May Court House office from the The Chalfonte Hotel in Cape May. It will move with him to his new congressional offices, either in Mays Landing or Washington. Dec. 28, 2018

Congressman-elect Jeff Van Drew and his staff spent Friday packing up mementos, framed documents and awards he plans to move to his Mays Landing and Washington offices in the new year. Dec. 28, 2018