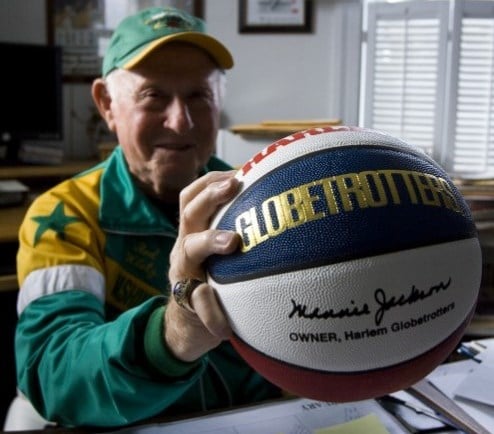 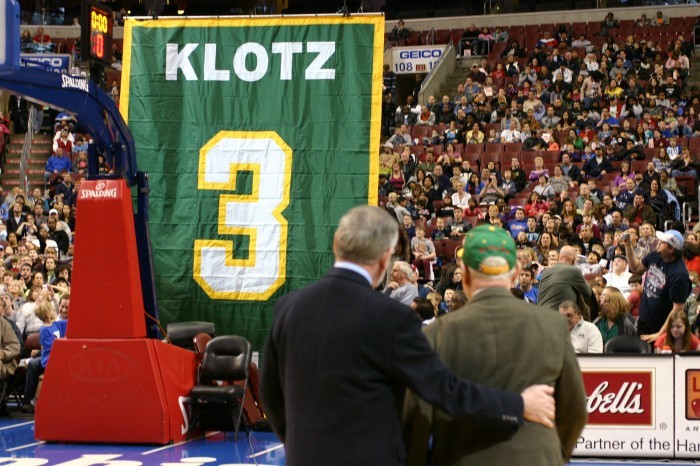 Red Klotz, right, watches as his Washington Generals jersey No. 3 is set to be raised to the rafters at the Wells Fargo Center in Philadelphia in 2011. Klotz, of Margate, spent decades traveling the world as an opposing coach and player for the Harlem Globetrotters. 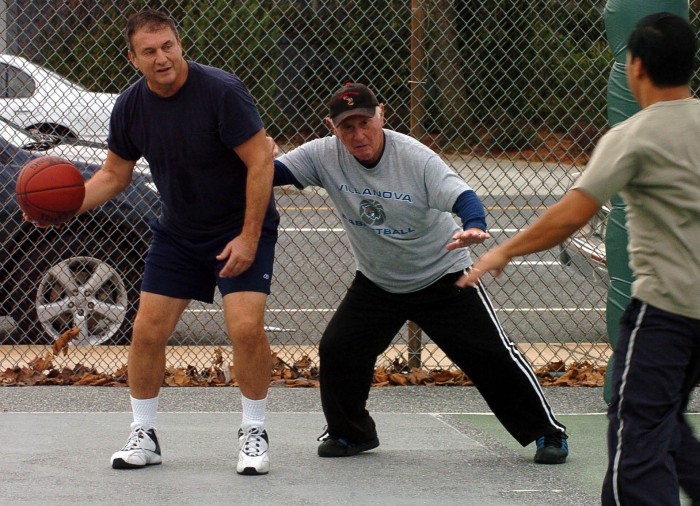 Larry Pacentrilli, of Ventnor, left, tries to dribble past Red Klotz, of Margate, at the Jerome Avenue basketball courts in Margate in November 2006. Klotz, then 86 years old, still played half-court basketball at the Jewish Community Center and Jerome Avenue courts.

Basketball pioneer Louis “Red” Klotz, of Margate, died Saturday at the age of 93.

Klotz was best known for being the longtime owner and coach of the Harlem Globetrotters' traditional opponent, the Washington Generals — who were known as the Atlantic City Seagulls for a few games in the 1970s — for more than 60 years, losing more than 14,000 games to the Globetrotters.

Klotz played on championship teams in high school and an undefeated college team, winning two professional championships, including with the 1948 Baltimore Bullets. He also played for for the professional Atlantic City Senators basketball team from 1945 to 1947.

“The Harlem Globetrotters organization is extremely saddened by the passing of Red Klotz, and our deepest sympathies go out to his entire family,” Globetrotters CEO Kurt Schneider said in a statement. “Red was truly an ambassador of the sport and as much a part of the Globetrotters’ legacy as anyone ever associated with the organization. He was a vital part of helping the Globetrotters bring smiles and introduce the game of basketball to fans worldwide.  He was a legend and a global treasure. His love of the game – and his love of people – will certainly be missed.”

The Klotzes owned a newsstand/fruit and snack shop on the Atlantic City Boardwalk, which was followed by Red's liquor store and bar in the uptown section of Atlantic City. When Klotz sold the Atlantic City operation, he opened the now defunct “Reds” club and bar in Margate that featured Globetrotters memorabilia on the walls.

Tim Kelly, of Ocean City, author of the book “The Legend of Red Klotz”, talked about Klotz to the Press in January.

“In between the scripted parts is real basketball,” Kelly said. “His challenge is to make his team look like it belongs on the same floor with them and actually pushes them to play well, so they have to play almost a flawless game. These guys, the Generals, are considered these buffoons, who always lose, but when you watch them play, they're doing fundamentally everything technically precise. They can all shoot. They all know how to hit the open man. They don't turn the ball over. They can't afford mistakes because they have limited times that they even have the ball, and they have to keep it close.”

In later years, Klotz would attend Globetrotters-Generals games when they were held in Philadelphia, New York City and Chicago.

A tribute to Red Klotz was held in January at Steve and Cookie's By The Bay in Margate, which featured an appearance by former Philadelphia 76ers and Boston Celtics coach Chris Ford.

Funeral plans will be announced this week, according to his obituary.

Margate's Red Klotz a legend despite 14,000 losses to Globetrotters

In 1952, Abe Saperstein, the owner of the Harlem Globetrotters, called up Louis “Red” Klotz with an offer — to form his own squad as opponents…

The Washington Generals haven't beaten the Harlem Globetrotters in 44 years, since the late Louis "Red" Klotz helped them earn a 100-99 overti…

With Globetrotters in town, Red Klotz's family pushes for Hall of Fame induction

Red Klotz, right, watches as his Washington Generals jersey No. 3 is set to be raised to the rafters at the Wells Fargo Center in Philadelphia in 2011. Klotz, of Margate, spent decades traveling the world as an opposing coach and player for the Harlem Globetrotters.

Larry Pacentrilli, of Ventnor, left, tries to dribble past Red Klotz, of Margate, at the Jerome Avenue basketball courts in Margate in November 2006. Klotz, then 86 years old, still played half-court basketball at the Jewish Community Center and Jerome Avenue courts.