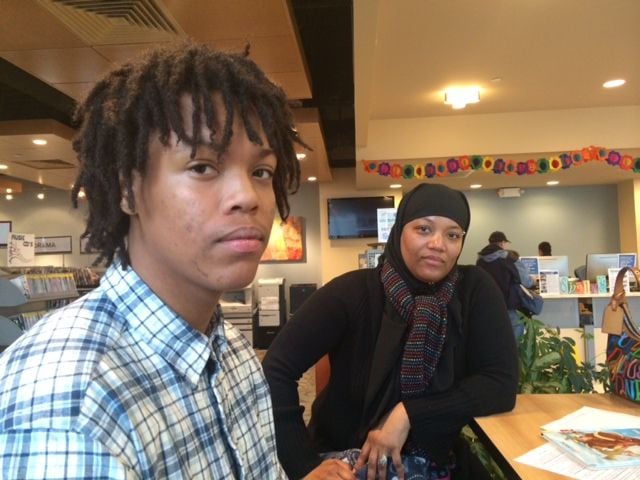 Raquil Hayes, pictured with his mother, Patricia Taylor, says he was trying to break up fights at Atlantic City High School when he was arrested for aggravated assault. Pink pic: The suspension slip Raquil Hayes was given says he "grabbed on" the principal. Other pic: The criminal complaint against Hayes says he punched Principal John DeStefano. 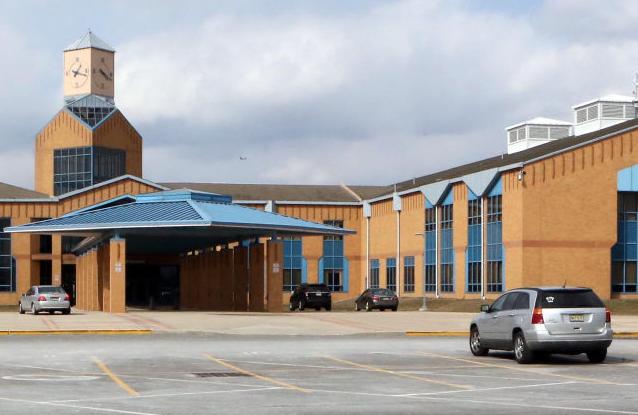 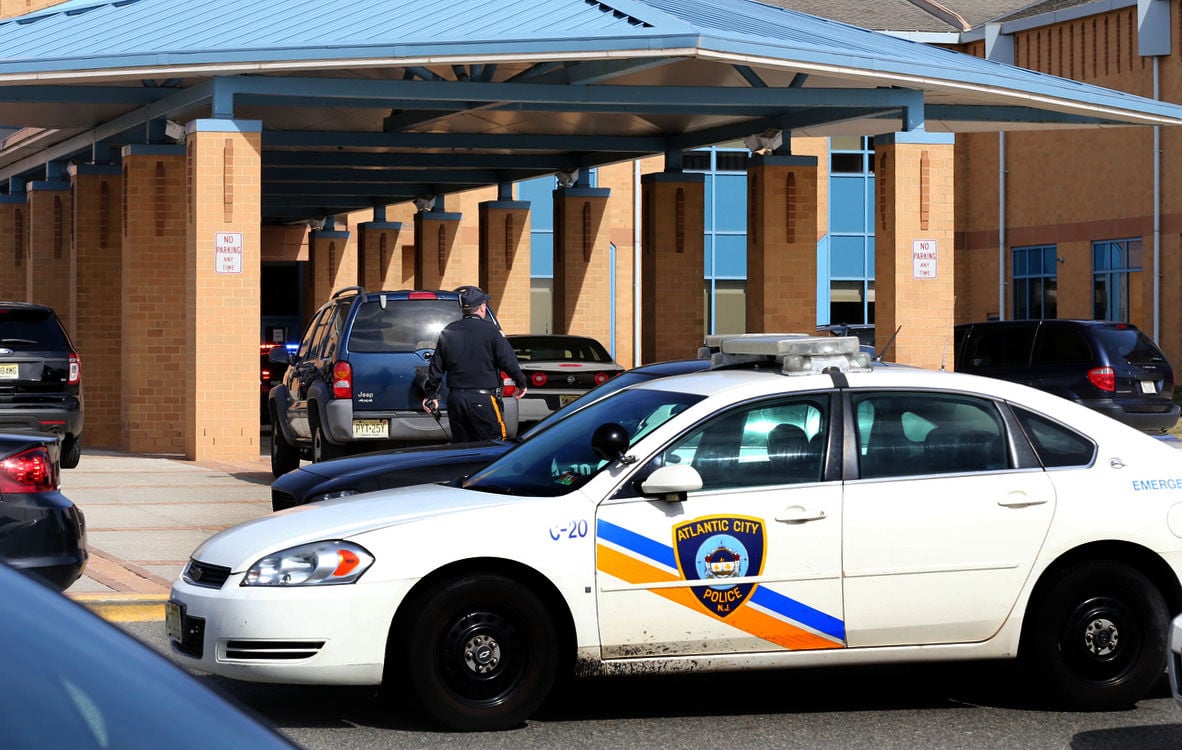 Atlantic City Police and emergency personnel were on the scene for a fight at Atlantic City High School, Thursday, March 16, 2015.

Six students have been charged with aggravated assault in two days of fights at Atlantic City High School.

But what’s going on inside the school isn’t exactly what is being portrayed publicly, students say.

Two security guards were injured, the principal and an assistant principal hit, and the chief of security spit upon Thursday, according to police. On Friday, another security guard was punched.

“I was trying to stop the problem that was going on,” said Edgar Batista, 18, who was arrested Thursday.

The school’s resource officer called in a large fight Thursday afternoon. Batista and four others, including three minors, were charged with aggravated assault.

When it was time for the students to head to their next period at about 10:45 a.m., pushing and shoving grew into another fight.

Laquan Davis, 19, was charged with aggravated assault after he allegedly punched a 37-year-old security guard in the chest, Sgt. Monica McMenamin said.

“It seems that, no matter where you go, you can’t quite escape the violence here,” junior Chris Sooy Jr. wrote in a letter to The Press of Atlantic City.

But many weren’t trying to escape Thursday’s riot, which Sooy said was started by four students less than 5 feet from him as he walked to his fourth-period class.

As he ran from the melee, “I was suddenly trampled by three students running to see the fight.”

Raquil Hayes said he ran toward the fighting — to help a student he said was bleeding from being struck in the head.

A student in the school’s alternative high school, which is now housed in the school’s J wing, Hayes was heading to get his lunch when he walked into the fighting, he said.

He was breaking up a fight between two other students when, he said, he was grabbed by Principal John DeStefano.

“I looked at him like, ‘I’m doing your job for you,’” Hayes said Friday, a day after he received a nine-day suspension and a summons to appear in court next Friday on an aggravated-assault charge.

Hayes said Batista came over and pulled him away, telling him to just get back to class.

The next time the two saw each other, they were in holding at the Police Department’s jail.

While security guards are a common figure in the school, “they may be more in the way than effective when they can’t even penetrate the crowd of students gathered around the fight,” wrote Sooy, 17, of Ventnor. “When they tried to seem important in (Thursday’s) debacle, they forcefully knocked over three of my innocent friends walking down the stairs.”

Batista said he’s a straight-A student who never has been in trouble and has been taking honors classes since his freshman year.

He’s planning to attend Wesley College in Delaware next year, and now worries a criminal charge could ruin that.

“I’m going to fight it,” Batista said. “I have video and over eight witnesses.”

He said he saw kids getting kicked in the face and couldn’t just sit by and watch.

“I’m pulling people off in the fight,” he said.

That’s when the assistant principal grabbed him around the collar. He said he made a move just to get her off of him, and then a teacher he never saw before grabbed him.

Batista insisted he would never strike a woman.

“I was raised by a single mother,” he said. “I would never disrespect a woman by putting my hands on her.”

But, he said, the school doesn’t care about getting the right person, just someone.

Hayes said Thursday was the third time he has been accused of being in a fight, including once when it was proven he wasn’t even at school.

The other time, he eventually was cleared by a security guard, said his mother, Pam Taylor.

She said she kept asking to see video surveillance but was always refused. With a criminal charge, any video captured by the school would be part of the evidence.

Hayes said he thought everything was done when he got his lunch and headed back to J wing Thursday. Then he was called into the office after the next period.

“I thought they were going to ask me what happened,” he said.

But instead, a security guard told him he was going to be arrested.

Both teens said they were not read their rights or questioned in the incident.

Hindelang, a teacher for 15 years, said the school isn't as bad as many think, but Friday was bad.

Police would not comment on the allegations. Neither DeStefano nor Superintendent Donna Haye could be reached for comment.

Ten other students were charged with disorderly conduct.

“To me, it doesn’t matter what is causing the violence. What’s important is stopping it,” Sooy wrote. “The precautions we’ve used so far obviously aren’t working, so it is time for a change.”

Suspect on the run in fatal shooting of 3 in Texas

Suspect on the run in fatal shooting of 3 in Texas 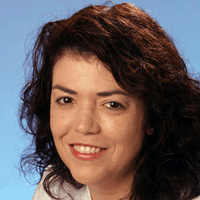 ATLANTIC CITY — The number of students charged with offenses resulting from a large fight at Atlantic City High School on March 19 has risen to 25.

Road rage led to an altercation with a hammer in the parking lot of Atlantic City High School — and the arrest of three people.

Paul Spaventa was appointed interim superintendent of the Atlantic City School District at the school board meeting Monday night.

ATLANTIC CITY — An attempt to protect a student being assaulted in a fight has cost a teacher his job.

Raquil Hayes, pictured with his mother, Patricia Taylor, says he was trying to break up fights at Atlantic City High School when he was arrested for aggravated assault. Pink pic: The suspension slip Raquil Hayes was given says he "grabbed on" the principal. Other pic: The criminal complaint against Hayes says he punched Principal John DeStefano.

Atlantic City Police and emergency personnel were on the scene for a fight at Atlantic City High School, Thursday, March 16, 2015.