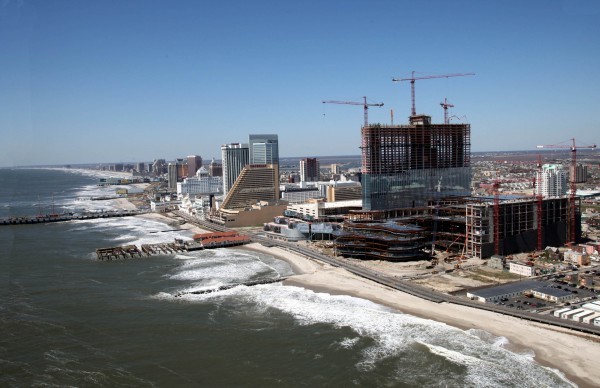 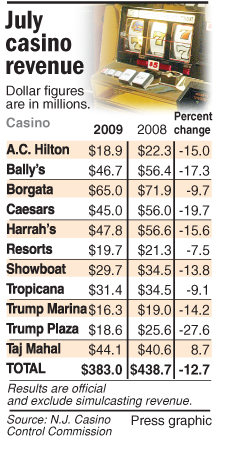 View an itemized graphic of how much each casino earned in July. 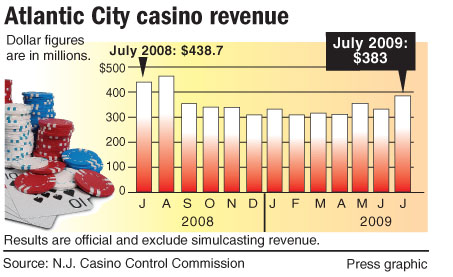 ATLANTIC CITY - Casino revenue sank to its lowest level in 12 years in July, another ominous sign that there will be no summer turnaround for the troubled gaming industry.

In what is ordinarily the biggest money-making month on the casino calendar, revenue generated by slot machines and table games fell 12.7 percent compared with July 2008, according to figures released Monday by the New Jersey Casino Control Commission.

Altogether, the 11 casinos took in $383 million in winnings, the worst July since 1997. An even more dramatic comparison is this July versus July 2005, when casinos posted an all-time record of $504.8 million in revenue. The 2005 figure is 24 percent higher than this July.

Only Trump Taj Mahal Casino Resort saved the industry from the ignominy of having every gaming hall in town suffer a decline. Boosted by a 45 percent jump in table game revenue, the Taj Mahal was up 8.7 percent overall for July.

Atlantic City has stumbled through 11 straight months of declining revenue and is heading for its third straight down year - a stunning slide considering that the first 28 years of casino gambling were consecutively higher.

Cory H. Morowitz, a casino analyst and chairman of Morowitz Gaming Advisors LLC, said the recession and fierce competition from Pennsylvania slot parlors continue to batter the Atlantic City market. However, he predicted a slow recovery may begin late this year if the recession continues to ease and consumers revert to their old spending habits with the help of the government stimulus package.

"We may get some positive surprises in the fourth quarter as the stimulus impacts take effect and people start to feel better about their wealth," he said. "The worst is over."

Despite the recession, the Pennsylvania slot parlors, Atlantic City's most formidable competitor, posted 18.5 percent growth in July to end the month with $179.2 million in revenue. The May 22 grand opening of the $743 million Sands Casino Resort in Bethlehem gave Atlantic City even more competition for gamblers in eastern Pennsylvania.

The Sands took in $19.6 million in slot revenue in July to boost the Pennsylvania gaming market overall. However, casinos in eastern Pennsylvania are suffering from extra competition from the Sands. Revenue was down 13.3 percent at the Mount Airy Resort and Casino in the Pocono Mountains. Harrah's Chester Casino and Racetrack was down 1.7 percent, and revenue at Philadelphia Park Casino and Racetrack fell 1.4 percent in July, figures show.

Most other states that have commercial casinos similar to New Jersey's continue to struggle. In Connecticut, slot revenue tumbled 9.1 percent at the Foxwoods Casino Resort and 8.8 percent at Mohegan Sun in June. Revenue at the Nevada casinos fell 8.3 percent in May. Nevada, a month behind Atlantic City in reporting revenue figures, is scheduled to release June's results today.

In Atlantic City, revenue is down 14.9 percent, to $2.3 billion, for the first seven months of the year.

"It's a lot more of the same. We continue to see the same double-digit declines year over year," he said. "The good news is, all of the hotels around town are filling up. The bad news is that the daytrip business continues to be on hiatus."

Summer is usually the most profitable time for the gaming industry, but July's big drop was preceded by a 13.6 percent revenue decline in June. Even the traditionally strong Fourth of July - one of the blockbuster holidays for casinos - could not push the industry higher.

Nita said more high rollers came to Atlantic City for the holiday, but he complained that many of the regular gamblers heading to town by car seemed to have gotten stuck in traffic jams.

"For every good piece of news we have, there is some other news that is challenging," he said.

Labor strife also continued to grip the city in July. Nita said picketing by the United Auto Workers union at the Harrah's Entertainment-owned Bally's and Caesars casinos "cast somewhat of a pall on the city and our properties."

The UAW, which represents dealers at Bally's and Caesars, has been staging union pickets to protest the lack of a new labor contract despite negotiations that have dragged on for months.

"The pickets themselves are pretty short in nature, lasting only an hour or two hours at most. It's not a significant portion of any business decline," Nita said.

Revenue fell 19.7 percent at Caesars and 17.3 percent at Bally's in July. Trump Plaza Hotel and Casino's 27.6 percent decline was the worst for the industry.

View an itemized graphic of how much each casino earned in July.

View casino revenue over the past year.
© Copyright 2021 The Press of Atlantic City, 1000 West Washington Ave. Pleasantville, NJ | Terms of Use | Privacy Policy
Powered by BLOX Content Management System from TownNews.com.
You don't have any notifications.