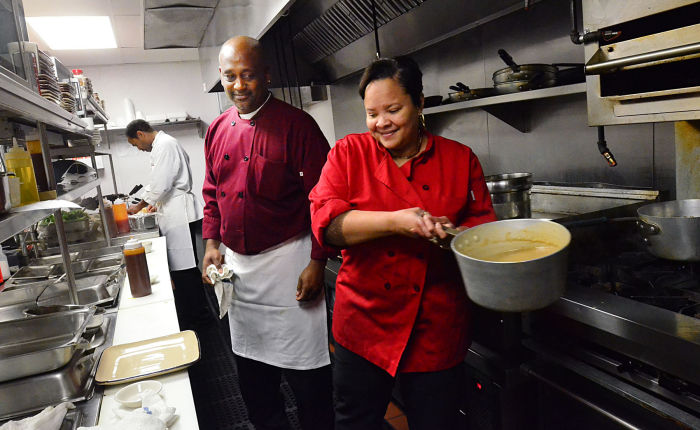 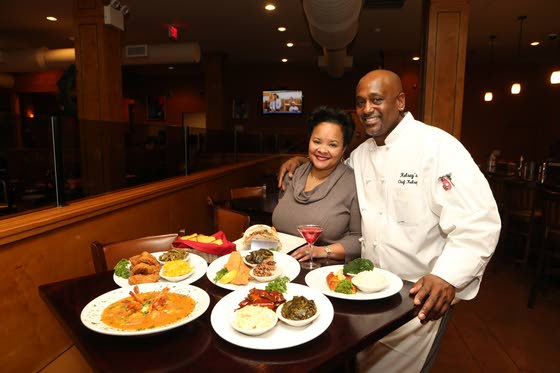 Kelsey and Kim Jackson of Kelsey’s in Atlantic City. 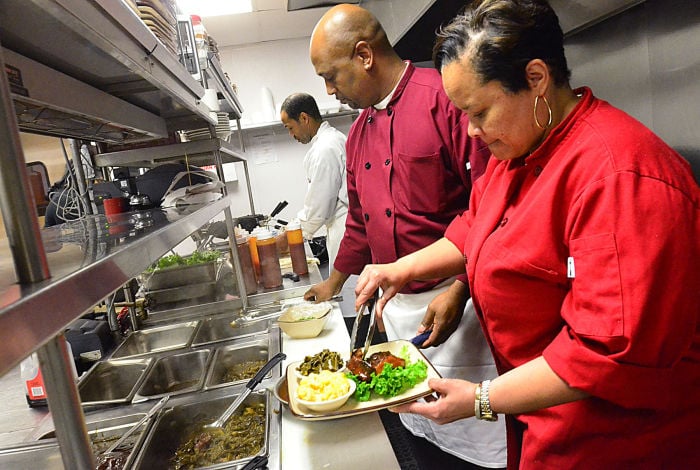 Owners Kelsey and Kim Jackson work in the kitchen at Kelsey's in Atlantic City on Saturday. 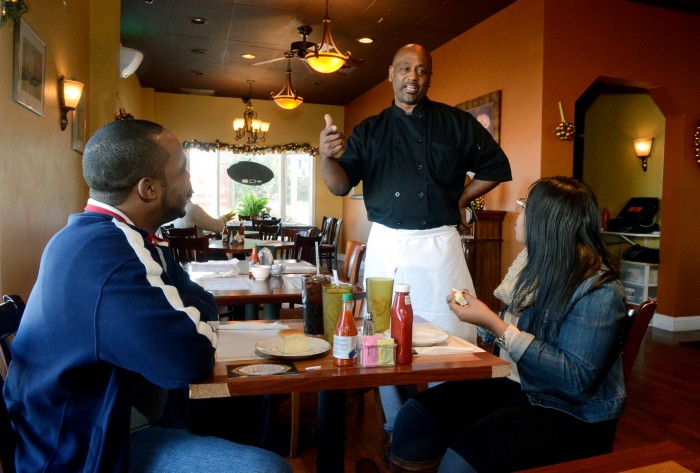 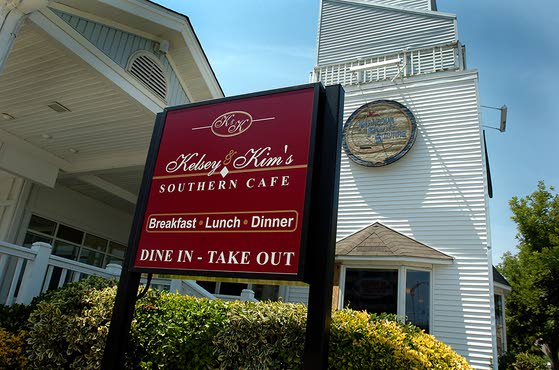 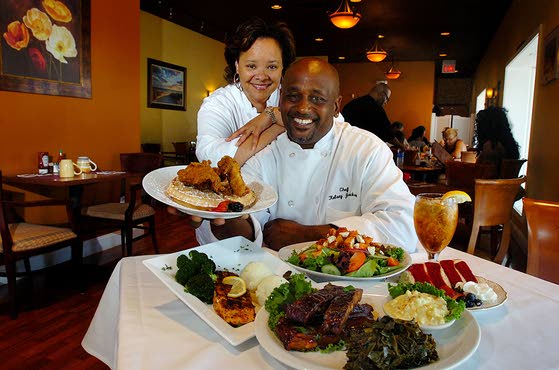 When Guy Fieri picked out the menu he wanted Kelsey Jackson to prepare for him for an upcoming “Diners, Drive-Ins and Dives” event, Jackson said he expected fried chicken and waffles, fried chicken and black-eyed peas or smothered pork chops to be on the list.

Those, after all, have been some of the more popular items ordered from his eateries in his 18 years of restaurateur experience. For sure, Jackson thought, Fieri would pick those meals that always come off the line at his two Atlantic City restaurants, Kelsey and Kim’s Southern Cafe at 201 Melrose Ave., or the newer Kelsey’s supper club on Pacific Avenue.

Instead, Fieri wanted to showcase pigs feet with chitlins and meatloaf, and smothered turkey chops with fried whiting in the episode airing at 10 p.m. today on Food Network.

Those are the menu items Jackson said are more popular with the older crowd. They get mad when Jackson runs out of pigs feet.

“I didn’t think he would ever pick those,” Jackson said Thursday.

That food harkens back to the true, down-South, home cooking that inspired Jackson to quit his $40,000-a-year job as a relief cook for the Trump Marina Hotel Casino in Atlantic City. Pigs feet and turkey chops were the kinds of meals served at Marie’s Soul Food Kitchen in Atlantic City, owned by a woman Jackson considered an aunt, and the restaurant that inspired him to bring soul food to the area.

Kelsey and Kim’s, run by Jackson and his wife, Kim, is one of a handful of South Jersey restaurants featured on the Food Network show in the past few months. Brigantine's Ernest & Son Meat Market and the Oyster Creek Inn Restaurant and Boat Bar in Leeds Point got their spotlight in December.

It’s expected that future episodes will show off the Anchorage Tavern Restaurant and the Grilled Cheese & Crab Cake Co., both in Somers Point, and Carluccio's Coal Fired Pizza in Northfield.

Back in September, Jackson said he got a call from the network about being featured on “Triple-D.” He was in San Francisco to watch the Philadelphia Eagles play the 49ers, and wasn’t planning on answering his phone while he was on vacation. He did anyway.

“I asked them, ‘How did you hear about the restaurant?’ And they told me, ‘A lot of people from out of town wrote about you, and we wanted to see what the buzz was about,’” he said.

Word-of-mouth is exactly what Jackson expects to set his restaurant apart from any other in the city. When he started his own restaurants, first in Pleasantville with Kelsey and Kim’s Soul Food and BBQ, the Atlantic City restaurant everyone buzzed about was the White House Sub Shop.

Lining the walls of the famed sub place are owners and employees with celebrity customers, from Miss Americas-to-be to Flip Wilson. It reminds Jackson of the times when performers such as Diana Ross and Lionel Richie visited Marie’s Soul Food, pulling up in sleek limousines for classic soul food.

Jackson said his restaurant will host a viewing party tonight. He’ll ring in the air date with loyal customers and live music. Eventually, Jackson said, he wants to bring back the times when jazz music poured from black-owned restaurants and clubs.

“When I started this business, that’s what I wanted (it) to be. I wanted it to be a must-stop place,” he said. “I think it’s in the right direction.”

More proof is surfacing that famed chef, author and television personality Anthony Bourdain and a film crew are in the Atlantic City area.

Carluccio's and Grilled Cheese Crab Cake Co. may get their Food Network moment

The Food Network’s “Diners, Drive-Ins and Dives” is planning on showing off two more South Jersey restaurants in March.

The final batch of Food Network episodes of “Diners, Drive-Ins and Dives” featuring three local restaurants will debut over the next few weeks…

Black-owned businesses face challenges as they grow in N.J.

Kelsey Jackson had a vision to open a soul food spot with true down-South cuisine. It took him 15 years, time he spent tucking away money he e…

The History Channel’s “American Pickers” TV show will be in the area to film episodes in early August, according to a statement from the show’…

Piccini in O.C. on 'Diners, Drive-Ins and Dives' Friday

If you ask Dave Cates why he thinks his restaurant will be featured in a Dec. 18 episode of “Diners, Drive-Ins and Dives,” he’ll tell you he d…

Vagabond Kitchen & Tap House is getting ready to capitalize on its upcoming close-up on the Food Network.

They may be oldies, but Food Network's Guy Fieri thought two South Jersey restaurant staples were good enough to make it on Friday night's new…

The wait is over. Episodes of The Food Network's "Diners, Drive-Ins and Dives" showcasing South Jersey restaurants are getting some air time.

When Kelsey and Kimberly Jackson opened Kelsey’s Atlantic City in December 2012, they were filling a void in A.C.

Kelsey and Kim Jackson of Kelsey’s in Atlantic City.

Owners Kelsey and Kim Jackson work in the kitchen at Kelsey's in Atlantic City on Saturday.

Owners Kim and Kelsey Jackson display some of the fare available at Kelsey & Kim’s Southern Cafe.
© Copyright 2021 The Press of Atlantic City, 1000 West Washington Ave. Pleasantville, NJ | Terms of Use | Privacy Policy
Powered by BLOX Content Management System from TownNews.com.
You don't have any notifications.