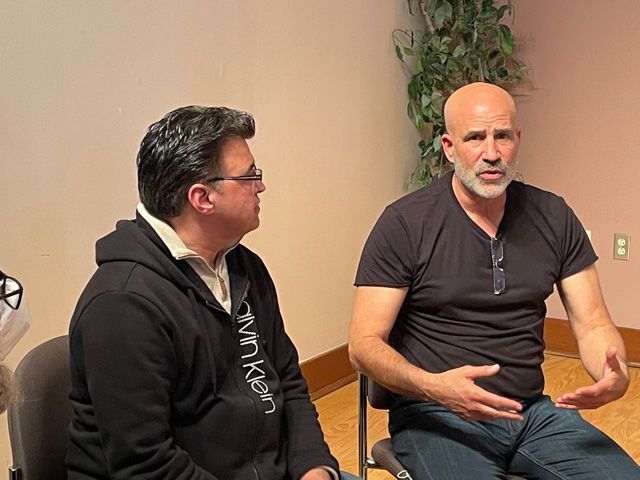 Amer Kashmeri, left, the president of the Atlantic City Boardwalk Merchants Association and Hard Rock Hotel & Casino co-owner Joe Jingoli discuss Monday placing local youth into jobs with the merchants as a way to bring the two communities together. The discussion was part of a forum at the All Wars Memorial Building put together by ONE (One Neighborhood Evolution), the city’s antiviolence program. 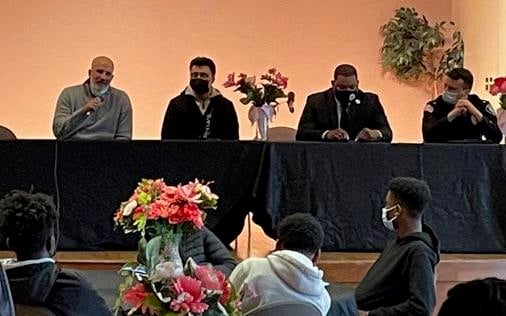 ATLANTIC CITY — The city’s antiviolence program called together local youth, Boardwalk merchants and local leaders on Monday, to find a way for kids and store owners to share concerns and get to know each other.

“Our program pays kids and manages (their placement),” Jingoli said of the Leaders in Training (LIT) program, funded by the Casino Reinvestment Development Authority and Jingoli that pays teens $15 per hour.

Amer Kashmeri, president of the Boardwalk Merchants Association, said his group is interested in participating and will meet again with the LIT program.

The meeting, attended by about 80 people at the All Wars Memorial Building, followed two traumatic events this month involving Boardwalk merchants in the city.

Merchant Mehmood Ansari, 65, collapsed and died after an altercation with a 12-year-old boy and a 14-year-old girl that led to charges against the local youths.

Days later Malik Awais, 26, of Egg Harbor Township, was charged with falsely reporting to police that his store had been vandalized and robbed.

Last week, the Police Department said it plans to deploy more officers around the city and will consider building a Boardwalk substation after the incidents prompted local, state and federal officials to meet to address safety concerns.

“Everybody else has had something to say during this time except for the youth,” said emcee Floyd Tally, director of anti-violence for the city. “Today we wanted to give the youth a chance to voice their opinion to you all.”

On the dais were representatives of local government, nonprofits, casinos and Boardwalk merchants brought together by ONE (One Neighborhood Evolution), which Mayor Marty Small Sr. called the city’s first anti-violence effort.

“Why would you all lie about Black kids ransacking your store?” asked one Black teenager of the merchants’ representative.

“That’s a good question,” said Kashmeri, whose store was not involved in either incident. “That’s the first and last time it will happen, we promise you.”

“We have to be careful about grouping everyone together,” said James Sarkos, interim officer-in-charge of the Atlantic City Police Department. “That was one store — not all stores.”

There is a waiting list of about 180 for the jobs, Days said. With more funding, he could place far more kids, he said.

“The only time we lose a kid is if someone moves away. The program is so successful, Days said. “These kids are not out buying sneakers. They are buying groceries and paying bills (for their families).”

Often they make more than their parents per hour, Days said, and families rely on their earnings.

Small said he’s seen social media posts complaining that kids are riding their bikes on the Boardwalk, but he pointed out it is legal to do so before the summer season. Even May 15 through Sept. 15 it is legal from 6 a.m. to noon in most places, and remains legal at all hours from Connecticut Avenue to Gardners Basin, according to the city.

“Just kids sitting on the Boardwalk ... is not a crime shouldn’t be frowned upon,” Small said.

“We need you to build a bike park for A.S.A.P.,” said one young boy. The group (Against Shooting Another Person) works to provide a positive outlet for kids, mainly by helping them learn how to bike safely and repair and maintain their bikes, said volunteer Darious Brown.

“We are working with the county for more open space,” Small said. “We just put in for a grant.”

He said he’d consider “where a possible bike park could fit. If we can make it happen, we will.”

EGG HARBOR TOWNSHIP — Police are looking for a missing boy who walked away from home.

ATLANTIC CITY — The rate of violent crime in the resort has declined in the past year, but some merchants and a city official believe petty cr…

ATLANTIC CITY — Four additional juveniles were arrested Saturday in connection with an April 1 Boardwalk robbery that left a shopkeeper dead.

Local legislators are again moving to help shore towns fund improvements to their boardwalks, through the same mechanism that they use to fund…

ATLANTIC CITY — A store clerk on the boardwalk was charged Monday after falsely reporting a robbery, police said.

Amer Kashmeri, left, the president of the Atlantic City Boardwalk Merchants Association and Hard Rock Hotel & Casino co-owner Joe Jingoli discuss Monday placing local youth into jobs with the merchants as a way to bring the two communities together. The discussion was part of a forum at the All Wars Memorial Building put together by ONE (One Neighborhood Evolution), the city’s antiviolence program.