President Donald Trump’s tweet thanking Congressman Jeff Van Drew, D-2nd, for opposing impeachment may have put Van Drew in the crosshairs of leftists nationwide, but it isn’t likely to hurt him in his conservative-leaning district, said one political expert on Monday.

“He’s in a district that Donald Trump won,” said John Froonjian, interim executive director of the William J. Hughes Center for Public Policy at Stockton University. “If anybody knows the area it’s Jeff Van Drew. He goes to every barbecue and every fire hall. I’d have to guess his positions are very well informed from having talked to people throughout the district.”

The latest Tweet storm started after Van Drew appeared on the Fox News Channel show Fox & Friends on Sunday and said he hasn’t seen evidence of any truly impeachable offense, and Democrats need to focus on getting things done like work on veterans issues, Social Security and Medicare, debt and infrastructure.

“Let the people impeach,” Van Drew said on the show. “We are going to have an election very shortly.”

“Thank you. Just another Witch Hunt by Nancy Pelosi and the Do Nothing Democrats,” Trump tweeted, after quoting Van Drew.

Van Drew said his position on impeachment has always been consistent and isn’t for the benefit of Trump.

“I believe it will split the country and hurt both Republican and Democrat constituents at the end of the day, and reduce and negate any work accomplished by this Congress,” Van Drew said Monday, adding he also opposed the President Bill Clinton impeachment.

He said his constituents have made it clear they want him to get things done for them.

“Do we want to have less expensive prescription drugs when we run for election again? Do we want a better election system, a safer one?” Van Drew said. “Those are the things I want to work on.”

While some Democrats on Twitter on Monday called for a primary challenger to Van Drew in 2020, Froonjian said the party organization is likely to stand by him and support his reelection.

Atlantic County Democratic Chairman Michael Suleiman said he hasn’t heard any talk of primary challengers, and he is focused on the 2019 election.

“I’m 1000% focused on the races we have this November. Then after Nov. 5, I can talk about next year,” Suleiman said. “This Ukrainian situation is very serious. I personally very much support the (impeachment) inquiry. We have to get to the bottom of this.”

Van Drew, a member of the moderate to conservative Blue Dog Democrats and of the bipartisan Problem Solvers Caucus, won in 2018 by campaigning on issues, Froonjian said.

“It was a recipe for success. Now that recipe is being filed away and impeachment and Ukraine are dominating the headlines,” Froojian said. “He knows how he won the district, and it wasn’t by beating up on Donald Trump.”

House Speaker Nancy Pelosi launched a formal impeachment inquiry against Trump last week. The probe centers on whether Trump abused his presidential powers and sought help from a foreign government for his reelection whwen he asked the Ukrainian leader to look into the actions of Joe Biden’s son Hunter Biden in the Ukraine.

At Pelosi’s appearance Friday in Atlantic City to address a conference of New Jersey Democrats, she called Van Drew “an independent voice” for Democrats in the House.

Sandman was on the House Judiciary Committee when it considered articles of impeachment.

Sandman lost his seat in the 1974 election to Democrat William J. Hughes, after Nixon resigned. Sandman had said he would vote for impeachment after the release of incontrovertible evidence, but his reputation was harmed by his support for Nixon in the televised hearings.

Van Drew told The Press of Atlantic City both before and after the announcement of the impeachment inquiry that he remains opposed, citing a lack of clear evidence that the president did anything that rises to the level of an impeachable offense.

Van Drew has consistently said he would change his mind and support impeachment if any information came to light about treasonous actions by the president, or proof that he demanded any actions concerning Biden in exchange for foreign aid.

Van Drew set himself apart from the majority of Democra ts on the day he was sworn in to his position in the House of Representatives, when he did not vote for Nancy Pelosi for Speaker.

However, since then Van Drew has often voted with her and the majority. He has also regularly appeared on Fox News Channel shows like Maria Bartiromo’s calling for bipartisan action on issues like immigration, border security and election security.

According to govtrack.us, based on bills Van Drew has sponsored or co-sponsored, he is in the right wing of Democrats but is well to the left of most Republicans and slightly to the left of the most liberal Republicans.

In March, freshman New York Democratic Congresswoman Alexandria Ocasio Cortez included Van Drew on a list of Democrats to be targeted with a primary opponent when he is up for re-election in 2020.

Ocasio-Cortez said at the time she would help liberal activists oust Van Drew and 25 other moderate Democrats in the 2020 Democratic congressional primaries, after a vote in which they joined with Republicans to support requiring U.S. Immigration and Customs Enforcement (ICE) be notified if an illegal immigrant seeks to buy a gun.

Search for missing crew to be suspended

Search for missing crew to be suspended

STAFFORD TOWNSHIP — Congressman Jeff Van Drew, D-2nd, will hold mobile office hours at the Stafford branch of the Ocean County Library most of…

South Jersey residents do not support the impeachment inquiry against President Donald Trump, or his immediate impeachment, as much as North J…

ATLANTIC CITY — After one of the most historic weeks of her long political career, having started an impeachment inquiry against President Don…

ATLANTIC CITY — The city will receive a $4.3 million federal grant for hiring, recruitment, and retention of firefighters, providing a way to …

CAPE MAY — The U.S. Coast Guard may have the shortest training of any military branch before recruits take up their jobs in the field, but tha…

Get ready for some hard-fought 2019 races in the 1st and 2nd Legislative Districts, two of the most highly competitive areas in the state with…

AVALON — Engineer, lawyer and businessman David Richter, the former CEO of Hill International in Philadelphia, announced Monday he is seeking …

Van Drew to push for newer jets at 177th

A look back at U.S. Rep. Jeff Van Drew's career

U.S. Rep. Jeff Van Drew's political career has taken him from Dennis Township dentist to state legislator known to vote against his party to t… 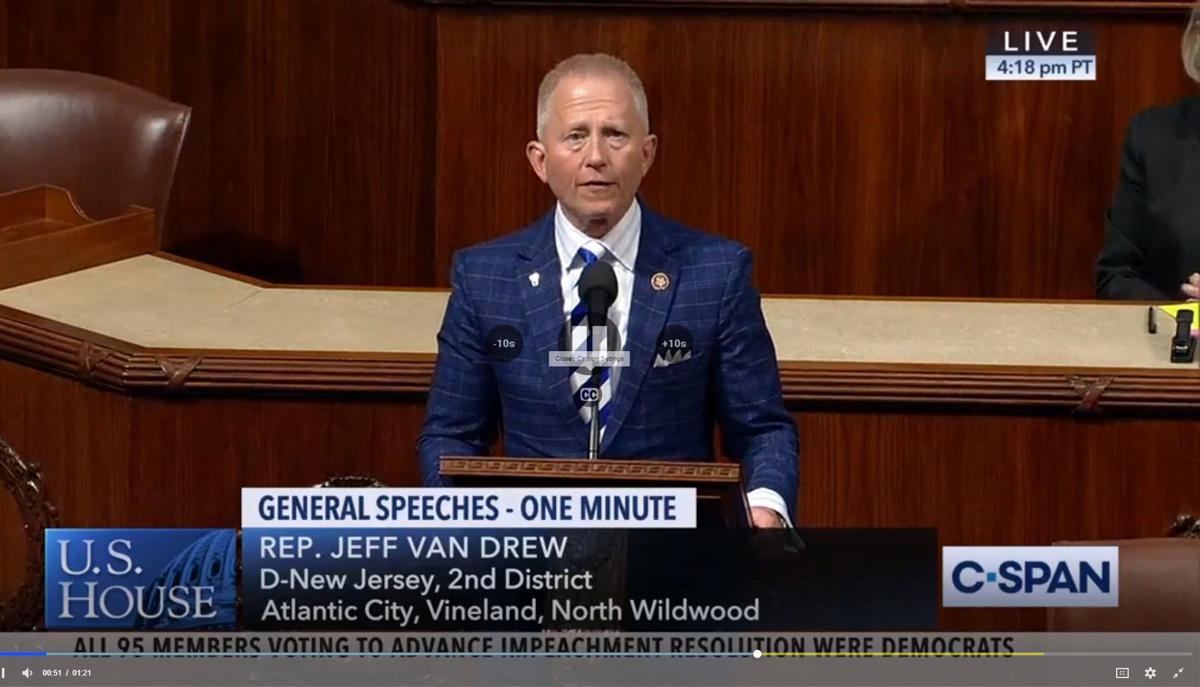 Congressman Jeff Van Drew says he wants to focus on issues like cheaper prescription drugs instead of impeachment. 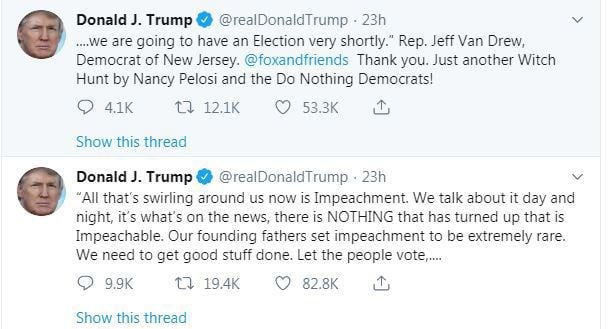