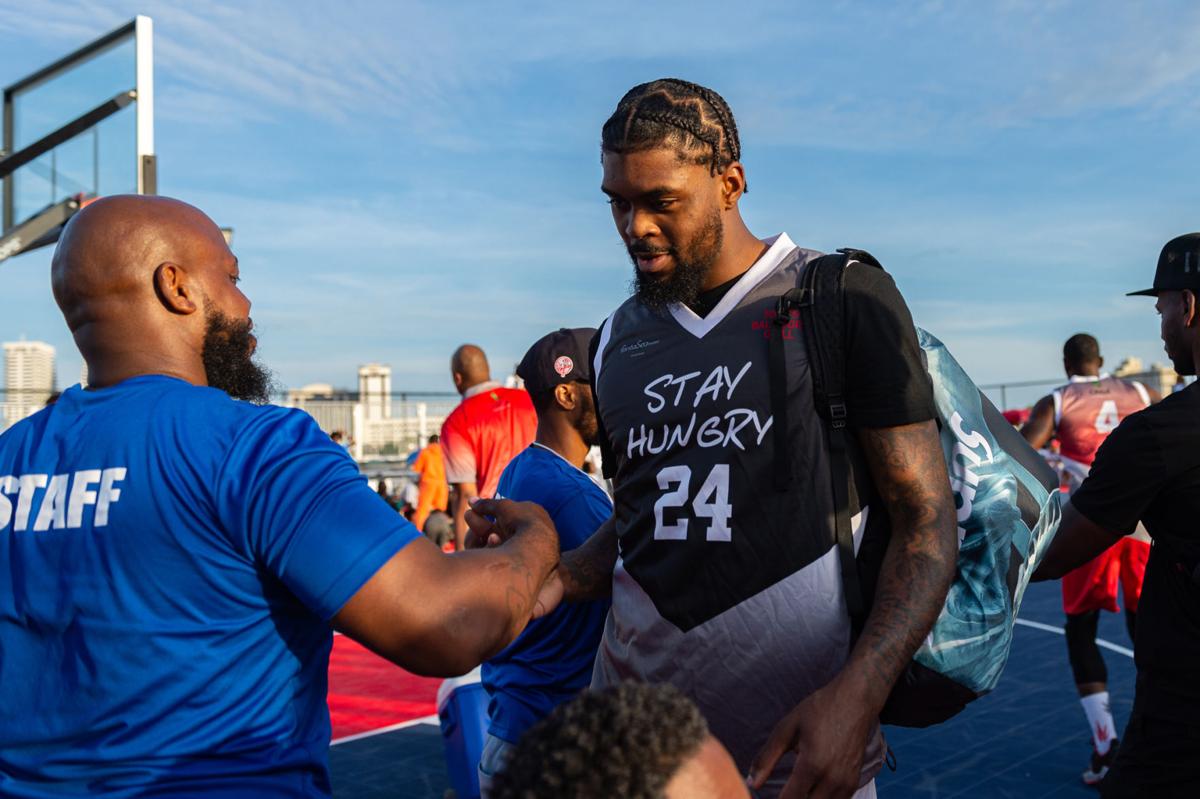 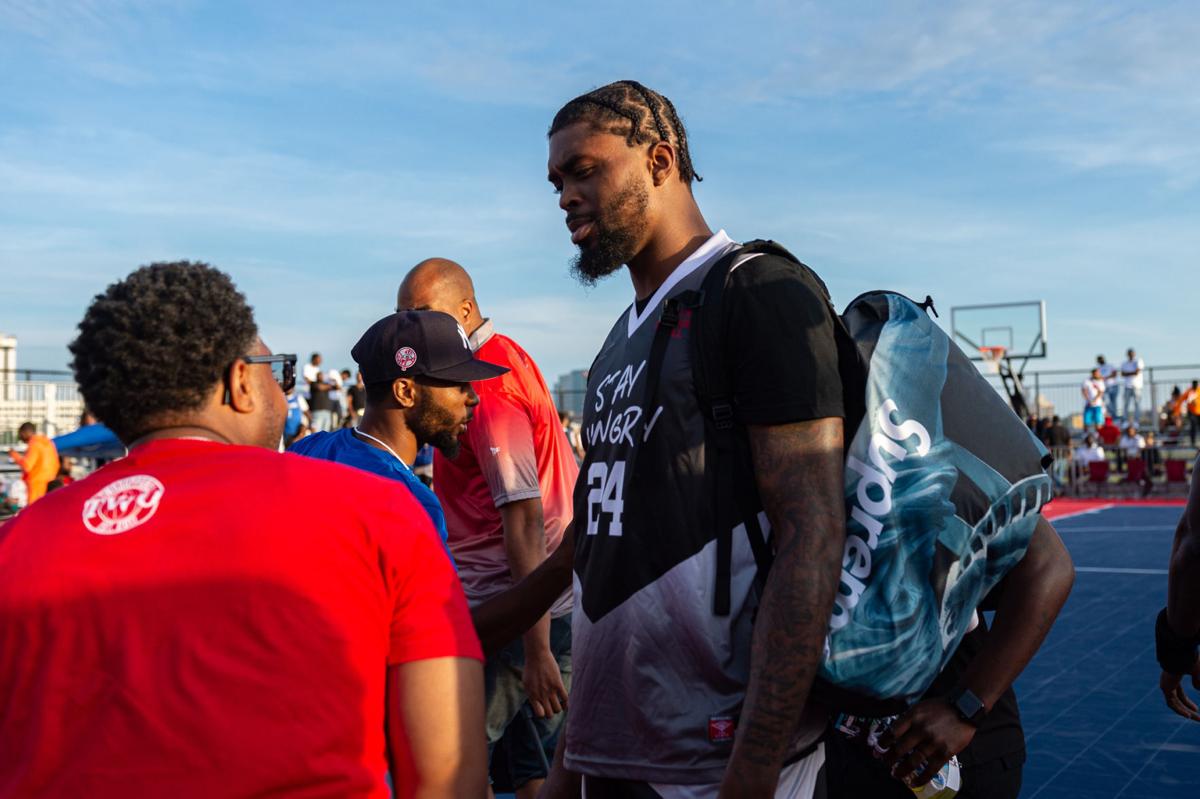 The Stay Hungry Basketball Tournament was played on Bader Field over looking Atlantic City on June 26, 2021. 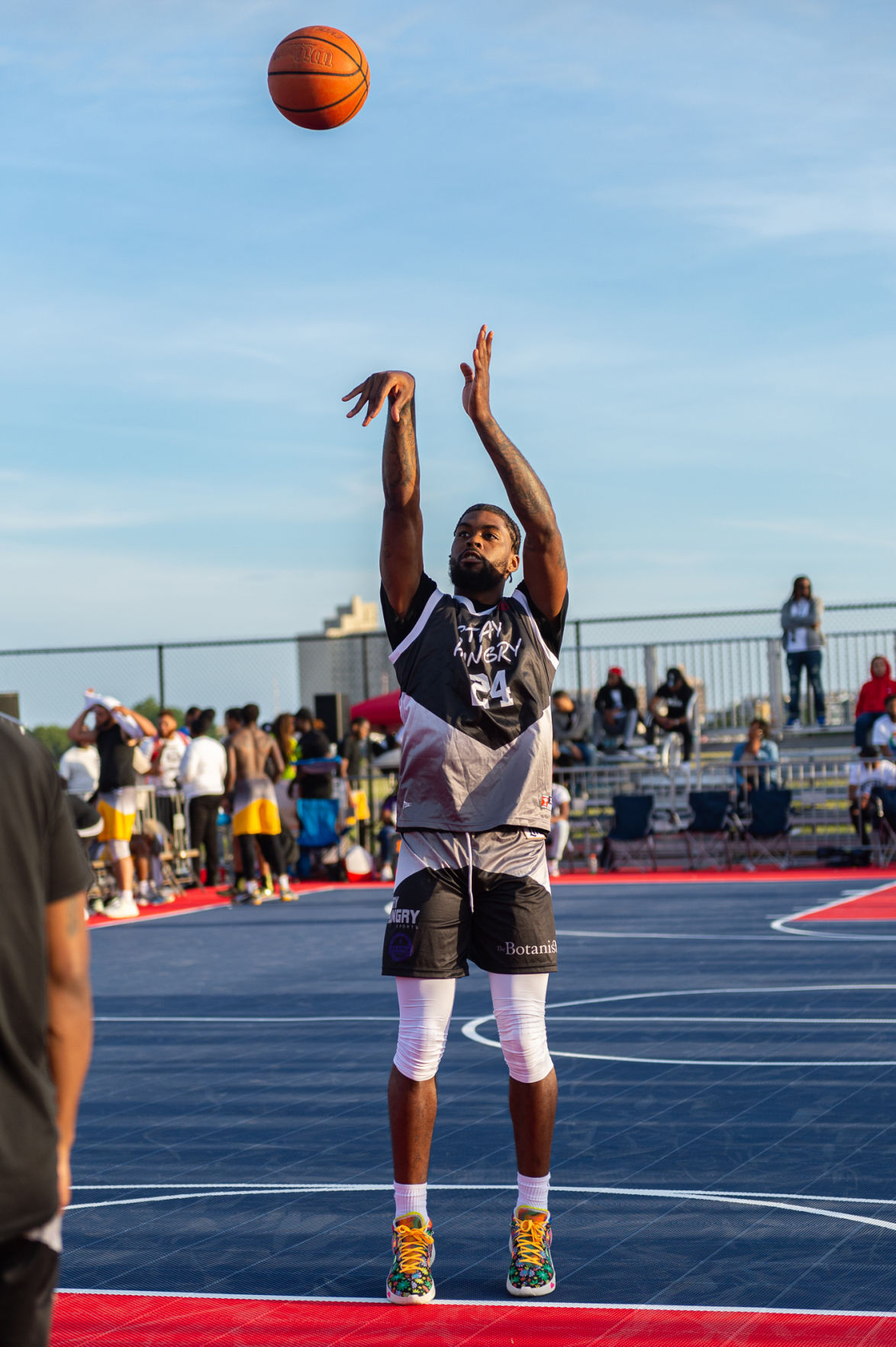 New Orleans Pelicans player Naji Marshall, an Atlantic City native, warms up before he plays for La Familia in the Stay Hungry Stop the Violence summer league at Bader Field. 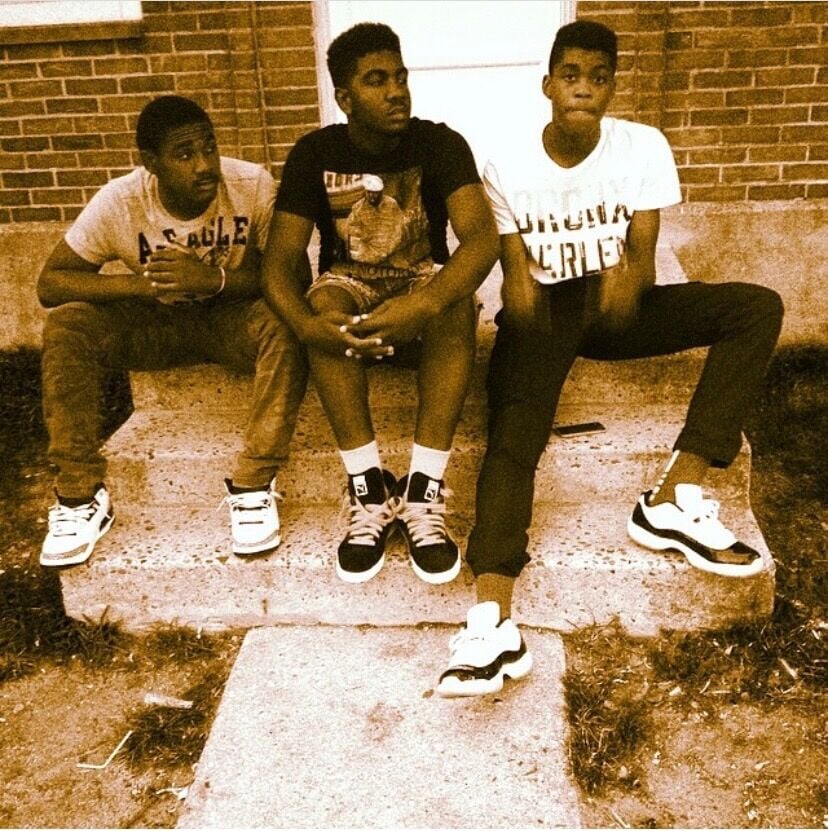 Naji Marshall (right) sits on the steps at Stanley Holmes Village in the summer of 2013 with his brothers Austin (middle) and Myles (left). 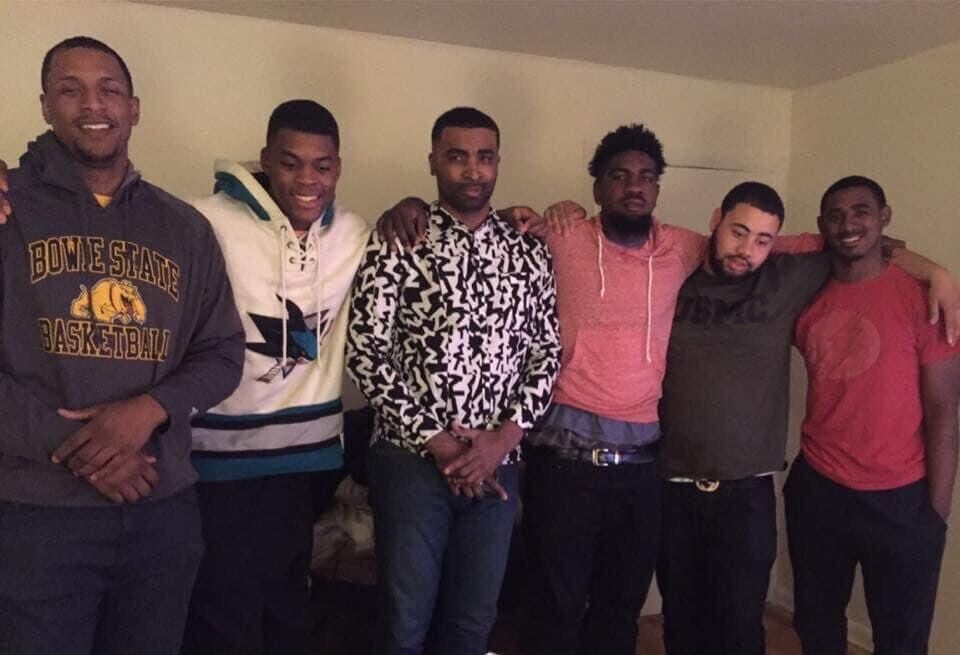 Naji Marshall with his brothers. From the left, Tai, Naji, Maurice, Austin, Craig and Myles. 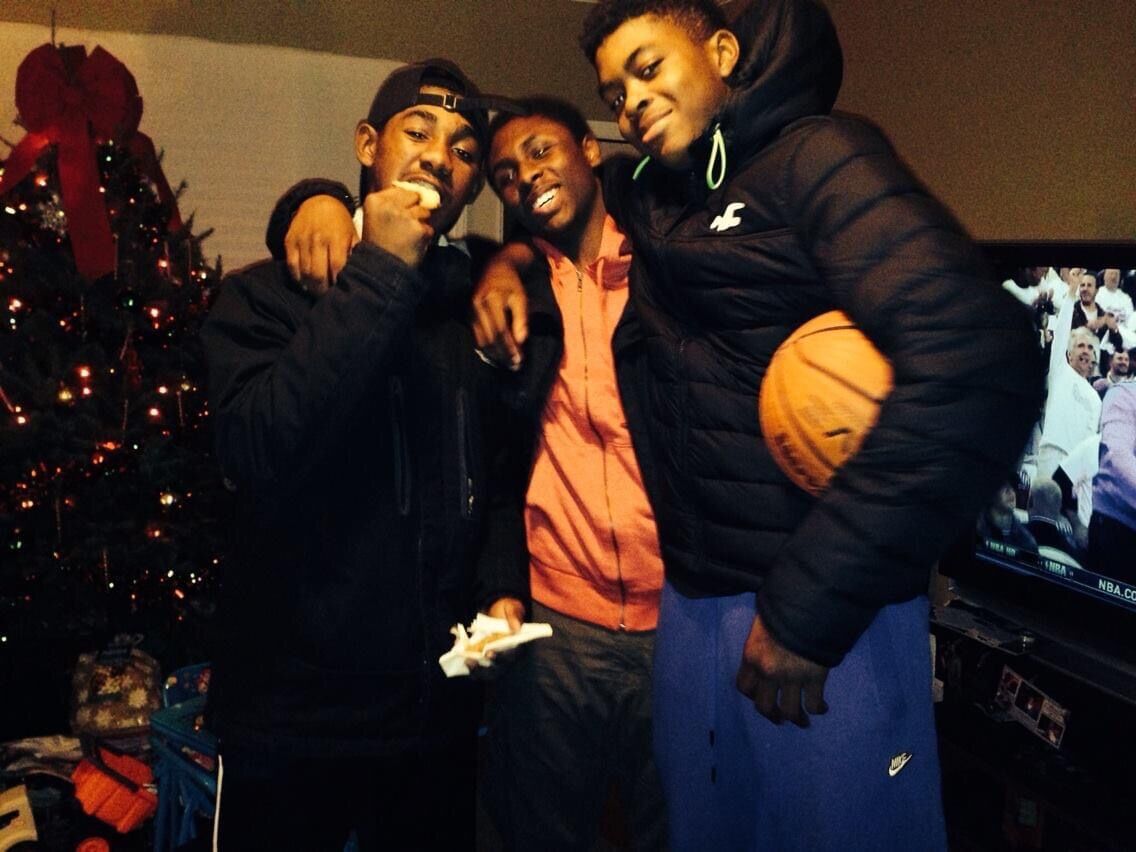 Naji Marshall, right with the basketball under his arm, poses with his brother Myles Marshall (left) and cousin Tian Marshall (middle) in the Marshall's home in Bungalow Park. 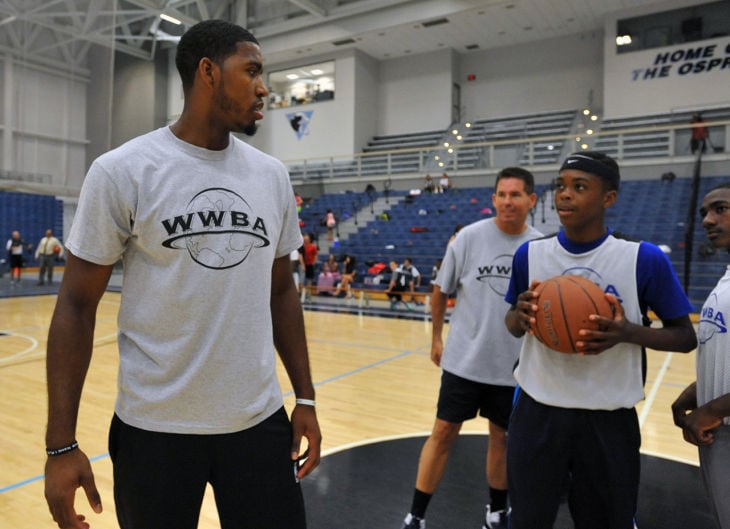 Outside of the city, however, he’s the resort’s secret success story because few South Jersey fans connect him to Atlantic City.

Naji, 23, made the NBA as an undrafted free agent last winter and this spring wrapped up an improbable and successful rookie season with the New Orleans Pelicans.

Naji was born in Atlantic City, spent his summers and vacations here, but went to high school and lived most of the year in Maryland. He is the first NBA player with Atlantic City roots since Lou Roe played with the Golden State Warriors in 1996-97.

As he has done his entire life, Naji returned to the resort this summer. He played for the La Familia team in a few Stay Hungry Stop the Violence summer league games at Bader Field.

Before a June 26th contest, the 6-foot-7 Naji didn’t need any introductions. He moved easily through the crowd. Fans came up to say hello, slap hands and give him a hug.

“It’s endless from almost everyone,” Naji said of the support he gets from Atlantic City. “That’s why I love coming back here. I’m trying to support who supports me.”

He hoped his presence at the Stay Hungry games would be an example to others.

“To be able to come back and give hope to the children from Atlantic City,” he said. “It means more to me than making it to the NBA.”

Naji moved with his mom, Rayna Whitted, to Maryland when he was 9 years old. But he returned often to Atlantic City to spend time with his brothers Tai, Maurice, Austin, Craig and Myles, and sister Martia.

Myles, 22, and Naji are especially close.

The two would ride around the city on their bikes, walk the Boardwalk, play pranks on each other or shoot hoops in the playground.

“We just toured around Atlantic City,” Myles said. “Every day was an adventure. Just walking around the city, finding something funny to do.”

Naji made a basketball name for himself playing in Atlantic City’s famed Triple-B summer youth league.

“Naji was in the fifth grade playing with high schoolers,” Myles said.

Atlantic City residents would see Naji pass by and ask if he was in the NBA because of his lanky look and long arms. He jokingly would say yes and sometimes posed for pictures with people.

“It was kind of funny,” Myles said.

Naji’s dad Maurice, 50, grew up in Stanley Holmes Village and has had a home in the the Bungalow Park section of the resort since 1999. Maurice played football at Pleasantville High School in the mid-1980s and then had seven fights as a professional boxer. He works as a custodian for the Atlantic City Board of Education at New York Avenue School.

“The whole city knows Naji,” Maurice said. “It’s always good when one of your kids does something. He’s just living his dream, so I’m happy for him.”

Maurice watched Naji play for the Pelicans against the Philadelphia 76ers at Wells Fargo Center on May 7.

“You get all kind of emotions,” he said. “Sometimes you just don’t believe it. You just feel happy.”

Naji attended school in Prince George’s County, Maryland, an area that has produced such NBA players as Kevin Durant and Markelle Fultz. As a high school senior, Naji led Eleanor Roosevelt High School to the 2016 Maryland state 4A championship.

“What stood out was one year I thought my guys were equivalent to him and then the next year (Naji) was so much better than everybody,” Allen said. “The summer of 2016 he made a huge jump in his skill set.”

Most South Jersey basketball fans do not associate Naji with Atlantic City because he didn’t play high school basketball locally. There was some talk that Naji would play for Atlantic City as a junior in 2014-15, but he and his family decided he had much better basketball opportunities in Maryland.

After a post-graduate year at Hargrave Military Academy in Chatham, Virginia, Naji received a scholarship to Xavier University in Ohio. He scored 1,277 career points for the Musketeers and declared for the 2020 draft after his junior season.

His mother hosted a party for Naji the night of the Nov. 18 NBA Draft at a Maryland restaurant. All of his siblings — except Myles, who had COVID-19 at the time — travelled south for the event.

But Naji did not get drafted. That night, however, served as motivation for his unlikely NBA journey.

“Wherever (Naji) played, he’s been the underdog,” Maurice said. “He’s always had a little chip on his shoulder. For him, this is another time he had to prove himself.”

The Pelicans signed Naji to a two-way contract in December, which meant he was eligible to play in both the NBA developmental league, called the G-League, and the NBA itself.

Naji didn’t get a chance to play consistently for the Pelicans until April when New Orleans lost multiple players to injuries. He made the most of the opportunity.

Naji showed the ability to penetrate opposing defenses to create shots for himself and teammates. With a near 7-foot wingspan, he was a pesky perimeter defender.

In the first quarter of a game on May 16 against the Los Angeles Lakers, Naji drove left down the lane. He dribbled past Lebron James on the baseline and flipped up a reverse layup that bounced off the backboard, around the rim and through the net. The clip made the national highlight shows.

Naji scored in double figures in seven of New Orleans’ last eight games. In May, he signed a three-year, $5.3 million deal that is guaranteed through the 2022-23 season.

Naji is currently back in New Orleans, preparing for the NBA Summer League in Las Vegas. His family is also preparing for the upcoming NBA season. Attendance restrictions caused by the pandemic limited the number of games they could see in person last season. Myles hopes to attend at least 10 of his brother’s games in 2021-22.

When asked before a Stay Hungry game at Bader Field whether he considers himself from Atlantic City or Maryland, Naji smiled and said, “I’m global.”

The Stay Hungry Stop the Violence League gives residents a safe, peaceful place to go on a summer Saturday to enjoy some high-level hoops, and on a recent night this June, it also gave them a chance to catch a glimpse of an NBA player.

Naji drew roars from the Atlantic City crowd with several acrobatic drives to the basket. He scored 30 points to lead La Familia to the win.

The Bader Field court, located about 100 yards beyond the Sandcastle Stadium’s outfield fence, is surrounded by bleachers. The casinos loomed across the bay, and when night falls and the casino lights shine, there’s arguably no better view of the resort’s skyline.

Naji has played in Madison Square Garden in New York and arenas all over the country. He looked right at home in the Bader Field setting, calling it Atlantic City’s “own little stadium.”

“Being from here, no matter where I’m at, I always want to stop by and get a few games in,” he said. “I love it out here.”

“To be able to come back and give hope to the children from Atlantic City. It means more to me than making it to the NBA.”

A 27-year-old Vineland man was killed in an accident on Route 55 in Clayton Township on Sunday morning, according to state police.

Sheriff's officials said Halyna Hutchins, director of photography for the movie "Rust," and director Joel Souza were shot. The Santa Fe New Mexican reported Baldwin was seen Thursday outside the sheriff's office in tears, but attempts to get comment from him were unsuccessful.

Man, 21, arrested after shooting at car with infants in Atlantic City

ATLANTIC CITY — A man was shot Saturday, with a suspect arrested by city police shortly thereafter.

Weather: NJ's cool season begins Sunday, here's how crisp and cool it will be

I'm calling it, the warm season of 2021 ended Saturday. Welcome to the cool season in South Jersey where yes, we'll still have days in the 70s in the coming weeks, but it won't come with that humid air as 60s become the norm.

How does Social Security work when a spouse or ex-spouse dies?: Savvy Senior

Dear Savvy Senior: Who qualifies for Social Security survivor benefits? My ex-husband died last year, so I would like to find out if me or my …

Cape May Council colleagues call on Bezaire to resign

CAPE MAY — The calls for a criminally convicted councilman to resign are now ringing out from within City Hall.

The Stay Hungry Basketball Tournament was played on Bader Field over looking Atlantic City on June 26, 2021.

New Orleans Pelicans player Naji Marshall, an Atlantic City native, warms up before he plays for La Familia in the Stay Hungry Stop the Violence summer league at Bader Field.

Naji Marshall (right) sits on the steps at Stanley Holmes Village in the summer of 2013 with his brothers Austin (middle) and Myles (left).

Naji Marshall with his brothers. From the left, Tai, Naji, Maurice, Austin, Craig and Myles.

Naji Marshall, right with the basketball under his arm, poses with his brother Myles Marshall (left) and cousin Tian Marshall (middle) in the Marshall's home in Bungalow Park.