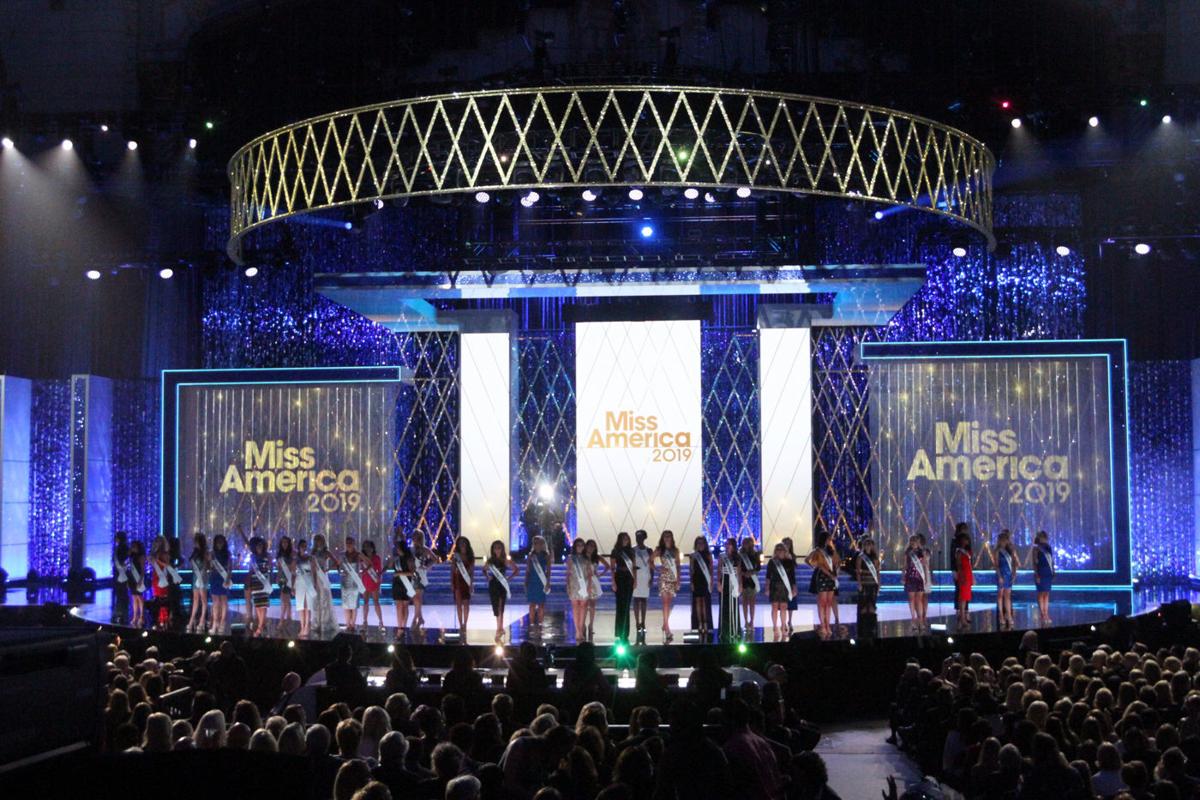 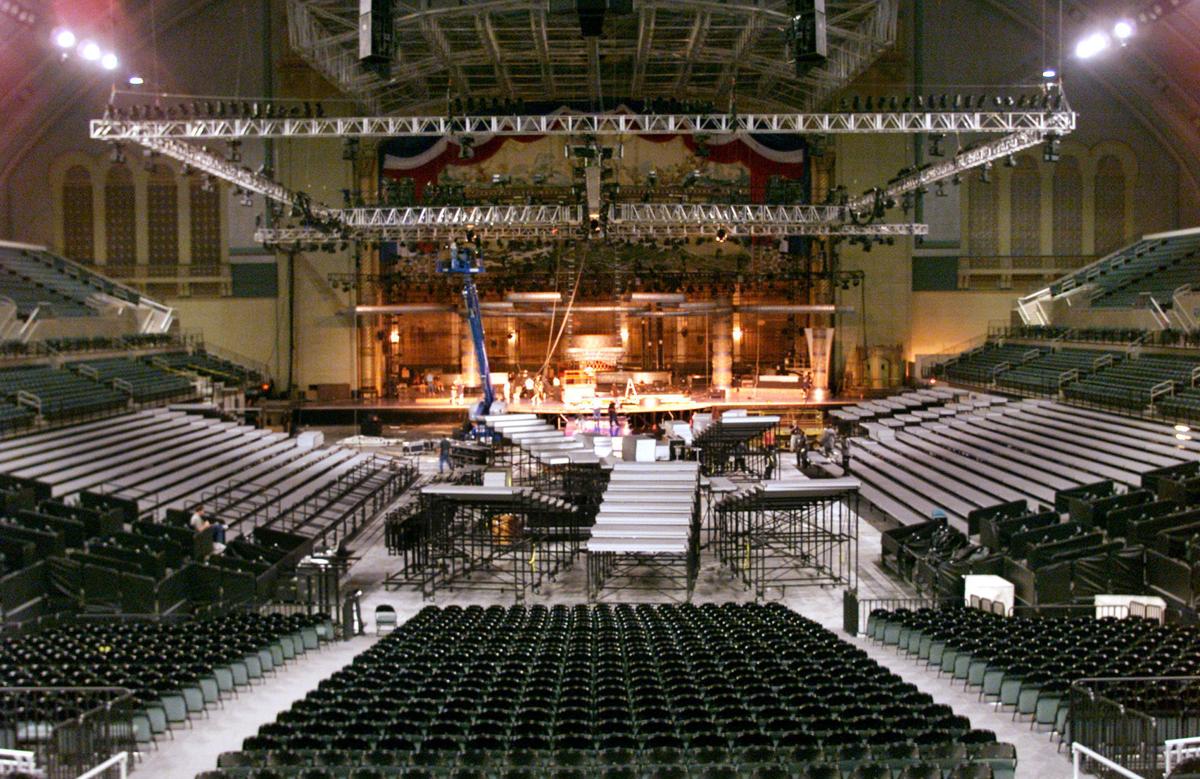 The Boardwalk Hall, in Atlantic City, is prepared for the Miss America Pageant telecast as risers and seating is moved into pl;ace, along with the stage decorations Thursday 9/12/02. 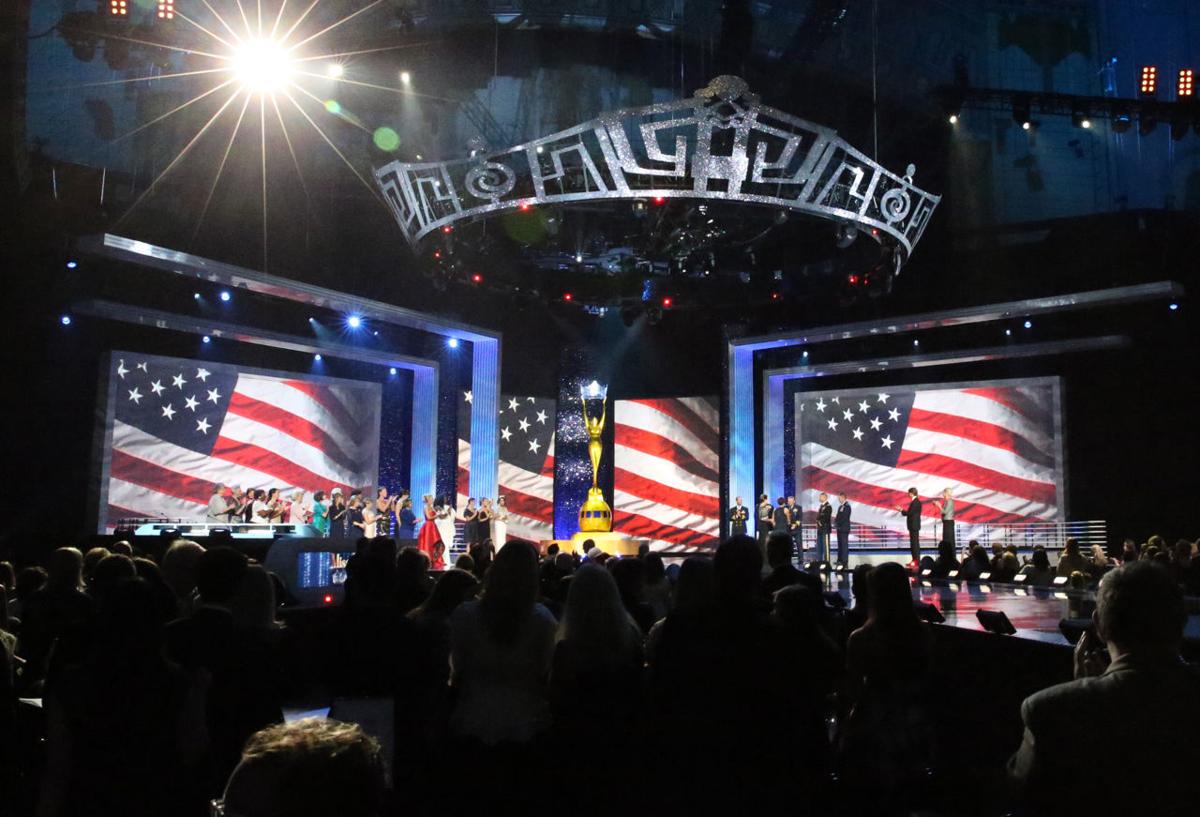 The audience stands for the singing of the National Anthem at the opening of the pageant. Miss America finals, Atlantic City Boardwalk Hall, Sunday Sept. 11, 2016. (Ben Fogletto/Press of City)

After nearly 80 years of gowns and crowns the weekend after Labor Day, historic Jim Whelan Boardwalk Hall will no longer be home to the Miss America Competition.

“It’s not going to be in Boardwalk Hall going forward,” Casino Reinvestment Development Authority Executive Director Matt Doherty said Wednesday during an editorial board meeting. “It doesn’t make sense for it to be there. It’s far too expensive to produce there.”

In a statement, the Miss America Organization said it agreed with the CRDA that production costs to hold the annual competition at the hall were too expensive.

“CRDA has told city leaders and MAO it wants to keep the competition in Atlantic City and has been actively helping MAO explore alternative venues,” the MAO said.

However, the statement added the MAO is still exploring other cities to host future pageants.

“When the MAO Board of Directors has reviewed all of the proposals, MAO will make a public announcement,” the statement said.

The competition has been held at Boardwalk Hall since 1940, with the exception of eight years when the pageant was held in Las Vegas from 2006 to 2013.

“We are disappointed not to be hosting the pageant this year,” said Boardwalk Hall General Manager Jim Wynkoop. “Miss America is an iconic brand. It has been a privilege to be associated with it for so many years. ... I am sure that I can speak on behalf of the hundreds of people who worked on the Miss America pageant 2.0 last year that we will miss the challenge to do it again next August and September.”

The Miss America pageant would book two weeks at Boardwalk Hall to build the stage pieces and iconic runway, and hold daytime rehearsals, preliminary competitions and the televised final night.

According to the venue’s website, Boardwalk Hall features a 141,000-square-foot main arena with a capacity of 14,770 seats. Last year, the final night of the Miss America Competition drew 5,880 ticketed spectators, including complimentary tickets. The three days of preliminary competitions drew an average of fewer than 2,000 people.

Doherty cited other shows coming to Boardwalk Hall in the next two years that have a broader appeal and bigger draw.

Miss America’s future in Atlantic City came into question after the three-year, $12 million contract between the pageant and the CRDA expired following the 2019 Miss America Competition in September.

“We gave (the MAO) $4.325 million last year to put on a show in a city that’s considered a food desert,” Doherty said. “We cannot afford it at that level of a subsidy. There has to be a private-sector solution to this.”

Doherty said he has been working with MAO Executive Chairwoman Gretchen Carlson and CEO Regina Hopper “to facilitate Miss America staying in Atlantic City. Probably at one of the casinos.”

In December, representatives for eight of the Atlantic City casinos declined to comment as to whether they were partnering with the MAO to host the next two pageants. However, the late Bruce Deifik, former owner of Ocean Resort Casino, said he had discussed with Carlson bringing Miss America to the casino’s Ovation Hall.

As of September, the MAO said it would require a host city or venue to provide $2.5 million to $4.9 million for production costs and more than 4,289 individual room stays for staff, contestants, family and pageant judges during the pageant’s two weeks.

“They have been very open to making changes we have suggested,” said Doherty. “It was mutually agreed upon that (Miss America) wasn’t going to be at Boardwalk Hall.”

ATLANTIC CITY — Thousands of visitors walk the Boardwalk every day, looking for the perfect landmark to take a photo.

Could Miss America return to Atlantic City for its 100th anniversary?

ATLANTIC CITY — As the 100th anniversary of the Miss America Competition draws near, the organization is reportedly looking to return to its roots.

Take a look at the 2019 Miss New Jersey contestants

The Miss New Jersey Pageant is leaving Ocean City this year and moving to a new home at Resort Casino Hotel in Atlantic City. The winner will …

No one was surprised the Miss New Jersey pageant was moving to Atlantic City more so than Ocean City officials.

GALLERY: A look back at Miss America at Boardwalk Hall

State officials have confirmed the Miss America Competition will not be held in Jim Whelan Boardwalk Hall, if the pageant returns to Atlantic …

The Boardwalk Hall, in Atlantic City, is prepared for the Miss America Pageant telecast as risers and seating is moved into pl;ace, along with the stage decorations Thursday 9/12/02.

The audience stands for the singing of the National Anthem at the opening of the pageant. Miss America finals, Atlantic City Boardwalk Hall, Sunday Sept. 11, 2016. (Ben Fogletto/Press of City)