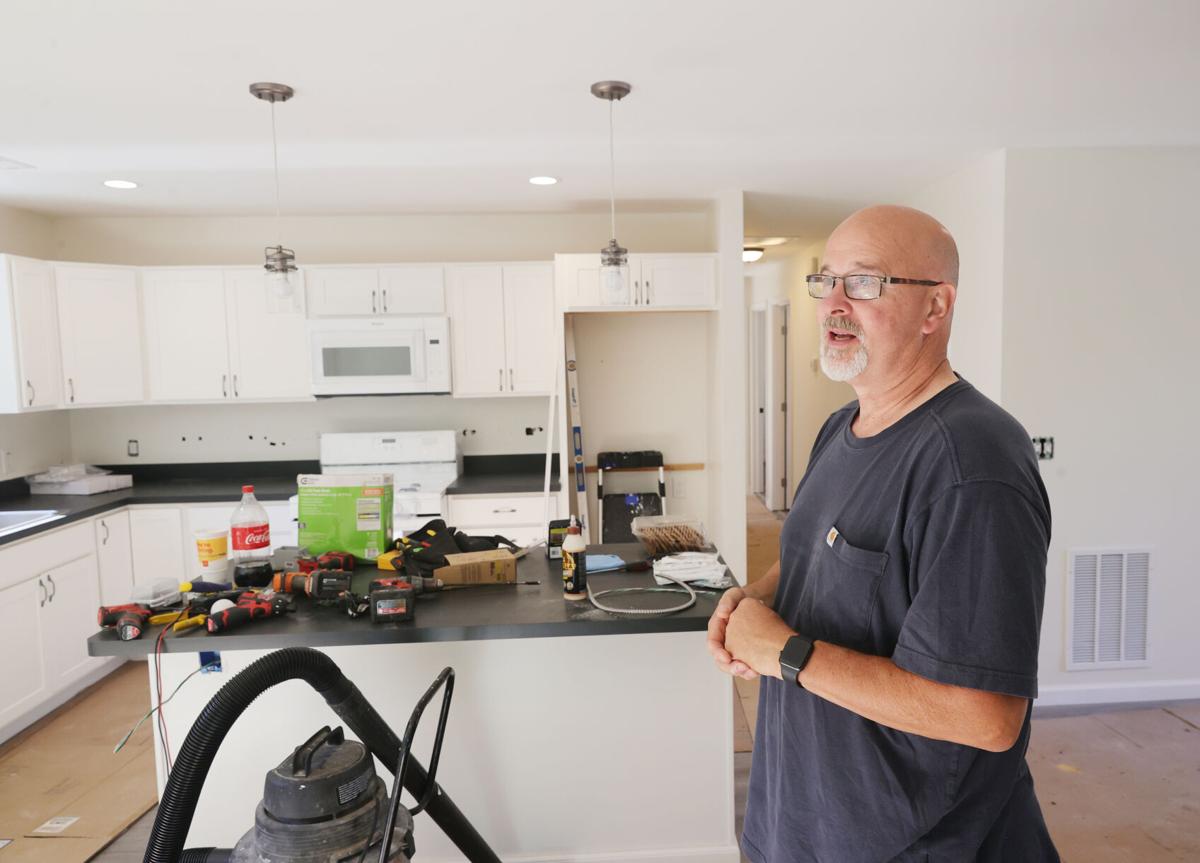 Miss America 1948 BeBe Shopp plants some pansies in the front yard of the Polancos’ new home in Hamilton Township. 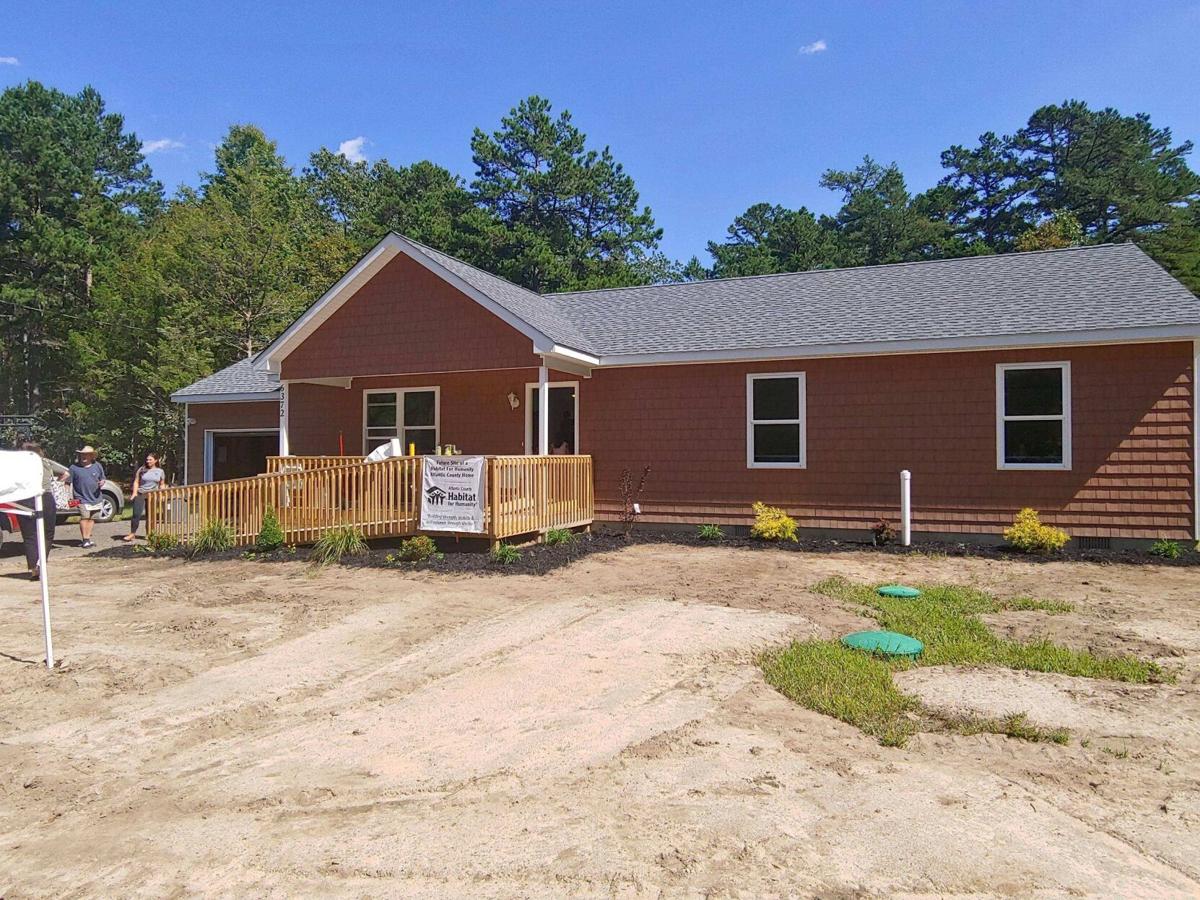 The Polancos’ new home in Hamilton Township was built in conjunction with Habitat for Humanity.

CHARLIE PRITCHARD For The Press

HAMILTON TOWNSHIP — Volunteerism has been the focus of a celebration this week in Atlantic City for people with ties to the Miss America Competition.

So for Miss Colorado 1991 Colleen Walker, what better way to spend some time Tuesday than volunteering to help others?

Walker, who is a trustee with the Miss America Foundation, and several other former Miss America winners and volunteers joined with Habitat for Humanity to contribute some sweat equity to the home of the Polanco family in Mays Landing.

“It’s an honor to get together on the 100th anniversary of the Miss America Pageant,” said Walker, who traveled from her home in Evergreen, Colorado, for the anniversary celebration. “This is a tribute week to volunteers, for without volunteers, projects like this would not happen. Volunteerism for the contestants in the pageant becomes a trait that stays with them their entire lives.”

Val Clemens, of Uniondale, Pennsylvania, is a former Miss Maine who serves as an active member of the Miss America Former Titleholders Association and is a coordinator for Habitat for Humanity.

Miss America will return to Atlantic City this week to celebrate its 100th anniversary — sort of.

“During the 100th anniversary of the Miss America Pageant we wanted to do something to help the community,” Clemens said. “We dedicate this day to the 2020-21 contestants in honor of the volunteer services they provide every day.”

The Polancos were definitely appreciative. Raul Polanco works as a night auditor, while Maribel Polanco is a housekeeper. They have three children — Emmanuel, 9, Lismary, 8, and Alexia, 5 — who are active in school and recreational activities.

Currently, the family lives in a two-bedroom apartment with narrow hallways and stairs that make it difficult for Raul to get around with his physical disabilities. With the help of Habitat for Humanity, the family will soon own the home in Mays Landing, equidistant from Raul and Maribel’s jobs and on a quiet residential street. The home is being built with Raul’s accessibility needs in mind, with features like being one level with minimal steps and a walk-in shower.

Raul expressed his gratitude to the volunteers and everyone who has made his family’s path to homeownership a reality.

Booster shots hitch: Some may miss the Sept. 20 start

“It’s amazing and truly a blessing,” the 2009 Atlantic City High School graduate said. “I never thought this would have ever been possible.”

“It’s so big and so beautiful,” Lismary said.

“I love it so much, it’s so gorgeous,” Emmanuel said.

Raul likes the fact that it is on a dead-end street.

“This makes it so much safer for the children to bike and play outside as there is very little traffic,” he said. “Maribel loves to garden and is already planning what vegetables to plant next spring. She also loves the large kitchen because she enjoys cooking.”

They discovered the property last October, Raul said. They then started coming to the property in April to help work on the three-bedroom home.

“This home is part of our affordable homeownership program where buyers purchase their own homes for an income-based, affordable mortgage,” said Annie Fox, chief development officer for Habitat for Humanity of Burlington and Mercer counties. “This family going through our program is expected to close on their home in November.”

“Our applicants have to put in 250 (single head of household) to 400 (dual ownership) sweat equity hours, meaning they volunteer on their own homes, other Habitat homes, in our ReStore and go through nine weeks of financial education courses,” Fox said, adding that none of what Habitat for Humanity does would be possible without volunteers.

“Volunteers are the foundation of our projects. They dedicate their time and energy alongside the future homeowners to make this dream a reality,” she said.

GALLERY: Look back at local pageants through the years

The Eachus family's dairy cows no longer have a barn for shelter.

For more than 40 years, nonprofit Habitat for Humanity has been plugging away at its affordable housing model. People who need a home help bui…

A tour of Miss America in Atlantic City

Starting at the Sheraton Convention Center Hotel and making your walk to Boardwalk Hall, there is still plenty of Miss America to see in Atlan…

Miss America 1948 BeBe Shopp plants some pansies in the front yard of the Polancos’ new home in Hamilton Township.

The Polancos’ new home in Hamilton Township was built in conjunction with Habitat for Humanity.