Jupiter and Saturn will appear closer and closer to each other every night leading up to the winter solstice, when the peak of 'The Great Conjunction' will occur. 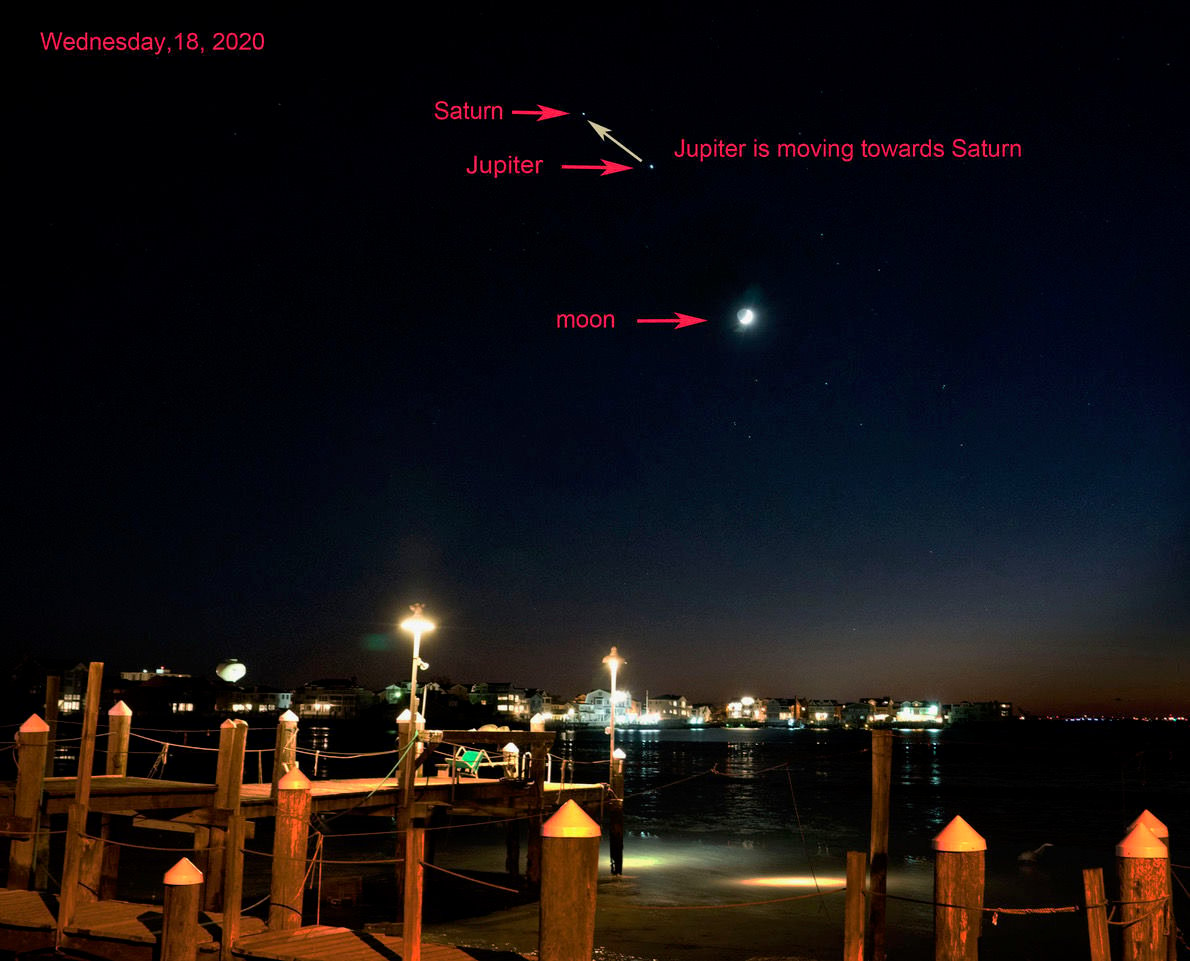 This week, we plunge into the starry heart of winter. We now have the brightest group of stars ever visible at their highest and best in the evening sky. And we also have a minimum of interfering moonlight for most of the week.

We’ll be discussing here such stellar wonders as Orion the Hunter, Taurus the Bull, the Seven Sisters star cluster, and the brightest of all stars, Sirius. But the second half of today’s column is my answer to whether the Great Conjunction of Jupiter and Saturn we recently saw could really have been a repeat of the Star of Bethlehem.

Intense wonders of the winter stars: The brightest constellation — that is, official pattern of stars — is Orion the Hunter. Orion, with its eye-catching Belt of three bright stars in a short row, reaches its highest in the south between about 9 and 10 p.m. in the second half of January.

To the lower right from the Belt is the blue-white star Rigel (RY-jel), almost always the brightest star in Orion. To the upper left from Orion’s Belt is the orange-gold star Betelgeuse (pronounced BET-el-juss or “beetle juice”), typically the second-brightest star in Orion. But Betelgeuse can vary markedly in brilliance. Just last winter this “red giant” star, so huge it could fill our solar system out well beyond the orbit of Mars, dimmed to about four times fainter than normal. This winter Betelgeuse is back up to its usual luster.

The most amazing sight beyond our solar system as seen in a fair-sized telescope is surely the glowing patch of gas called the Orion Nebula. It surrounds the middle star in the dim vertical line of stars that runs down from the much brighter diagonal line of the Belt of Orion.

If you draw a line from the Belt of Orion well to the upper right you find the V-shaped pattern of Taurus the Bull’s face, formed by the Hyades (HI-uh-deez) star cluster and the much brighter star Aldebaran (al-DEB-uh-ran), the orange eye of the Bull. Beyond Aldebaran and the Hyades sparkles the unmistakable tiny dipper-shape of the Pleiades (PLEE-uh-deez) or Seven Sisters star cluster.

If you draw a line from the Belt of Orion well to the lower left it takes you to easily the brightest of all stars. That star is Sirius (pronounced like the word “serious”), also known as the Dog Star because it marks the head or heart of Canis Major, the Big Dog. During mid-January this blue-white gem rises during evening twilight and reaches its highest in the south (though not very high) around 11 p.m. But on many nights when our atmosphere is unsteady, Sirius twinkles with pulses and bursts of every color.

Was the Star of Bethlehem a close pairing of Jupiter and Saturn? Last month, the conjunction of Jupiter and Saturn in our sky was at its tightest just four days before Christmas. The two planets weren’t quite close enough together to blend into one point of light. But some scholars have suggested that another Jupiter-Saturn conjunction, back in 7 B.C., could have been the Star of Bethlehem.

Actually, there was a series of three Jupiter-Saturn conjunctions in 7 B.C., but none of them was anywhere near as close as the one of Dec. 21, 2020. Instead, researchers in recent decades — including myself — believe that the Star of Bethlehem was a series of three conjunctions of the two brightest planets, Venus and Jupiter, that occurred in 3 B.C. and 2 B.C. One of these Venus-Jupiter conjunctions was so close that the Magi would have seen the two planets merge into a single point of light. In fact, this event was the closest of all forms of conjunction: a “mutual occultation,” in which a telescopic observer can see the globe of one planet pass right in front of the other.

A friend of mine who is a world-famous astronomical calculator, Steve Albers, recently discovered Jupiter passing in front of Saturn last happened in 6858 B.C. and will next happen in 7541 A.D. — twice in that year!

Fred Schaaf is a local author and astronomer. He can be reached at fschaaf@aol.com.

Boy Who Lost Leg Gets Puppy Born Without A Paw

Boy Who Lost Leg Gets Puppy Born Without A Paw

Jupiter and Saturn will appear closer and closer to each other every night leading up to the winter solstice, when the peak of 'The Great Conjunction' will occur.