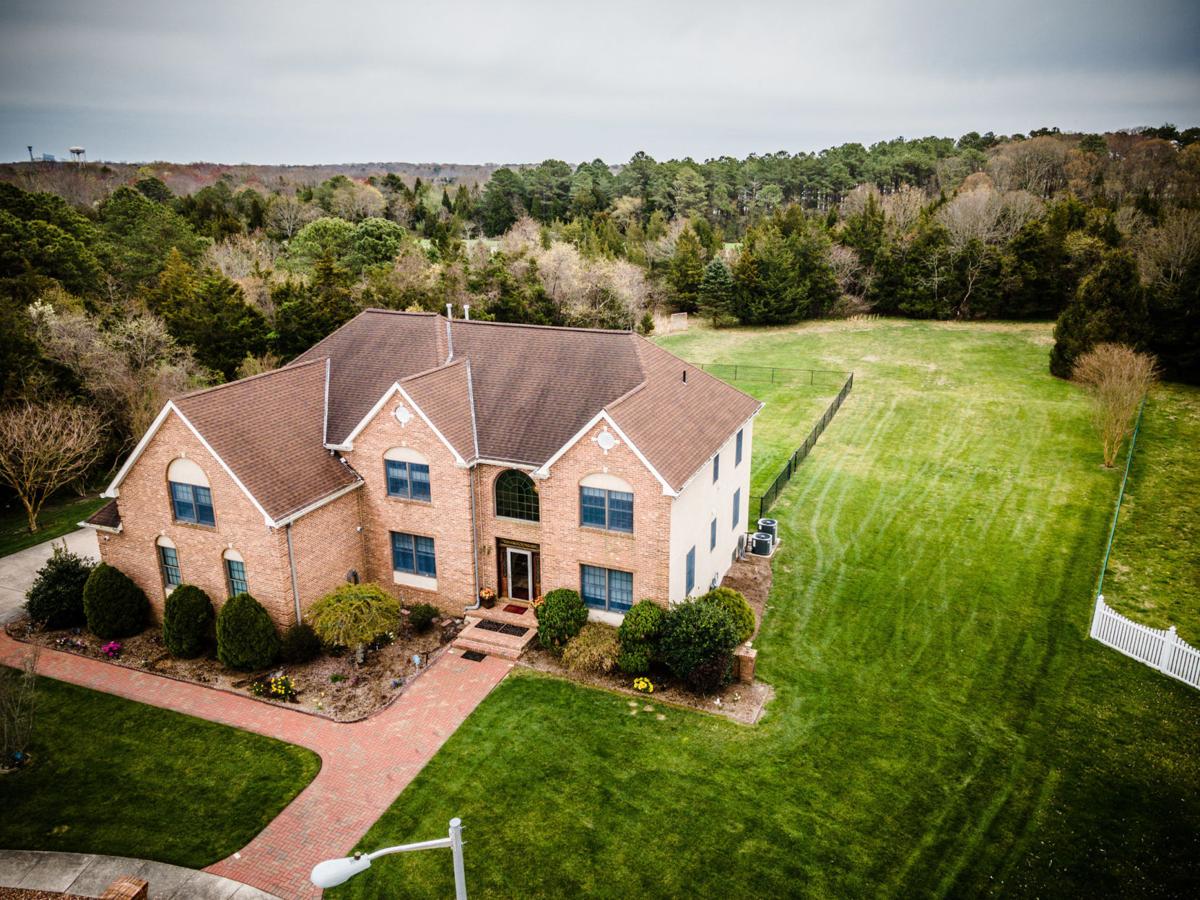 Having lived there for 22 years, its original occupants have added numerous upgrades to this magnificent, yet warm and inviting four bedroom, four-and-half bath residence that is now just a bit too roomy for them. 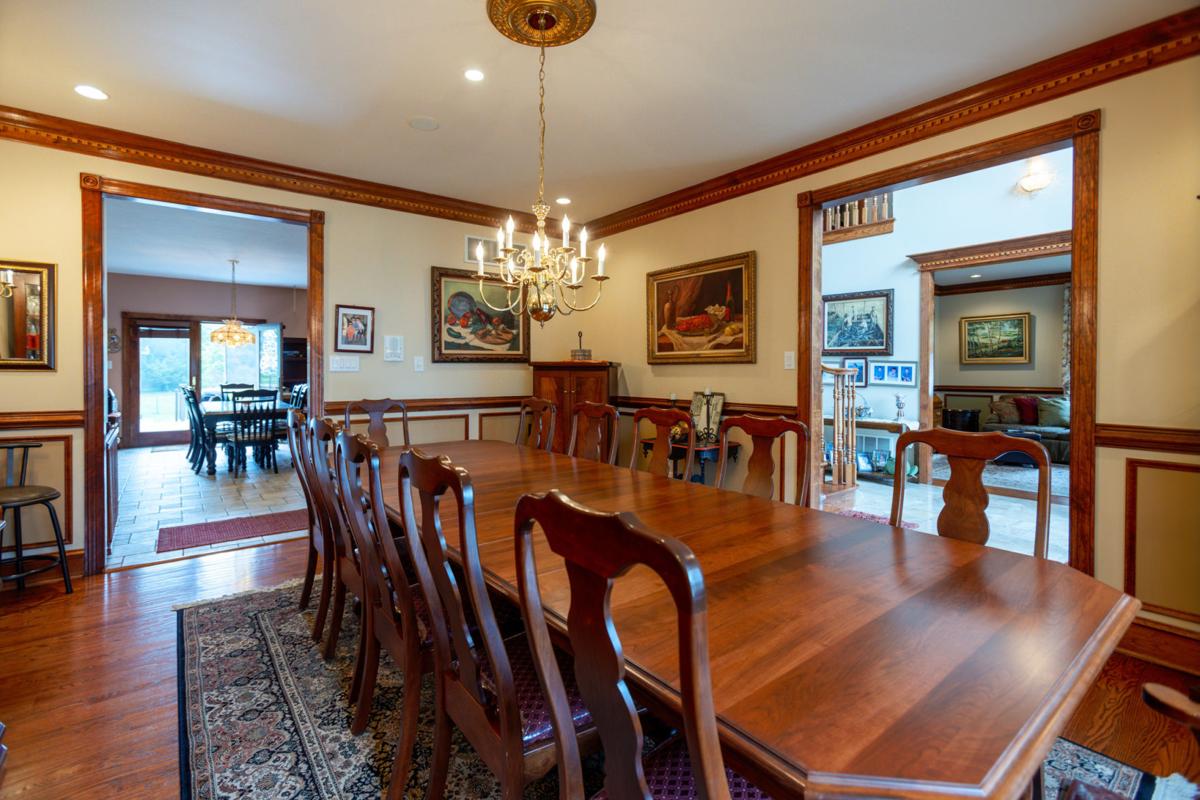 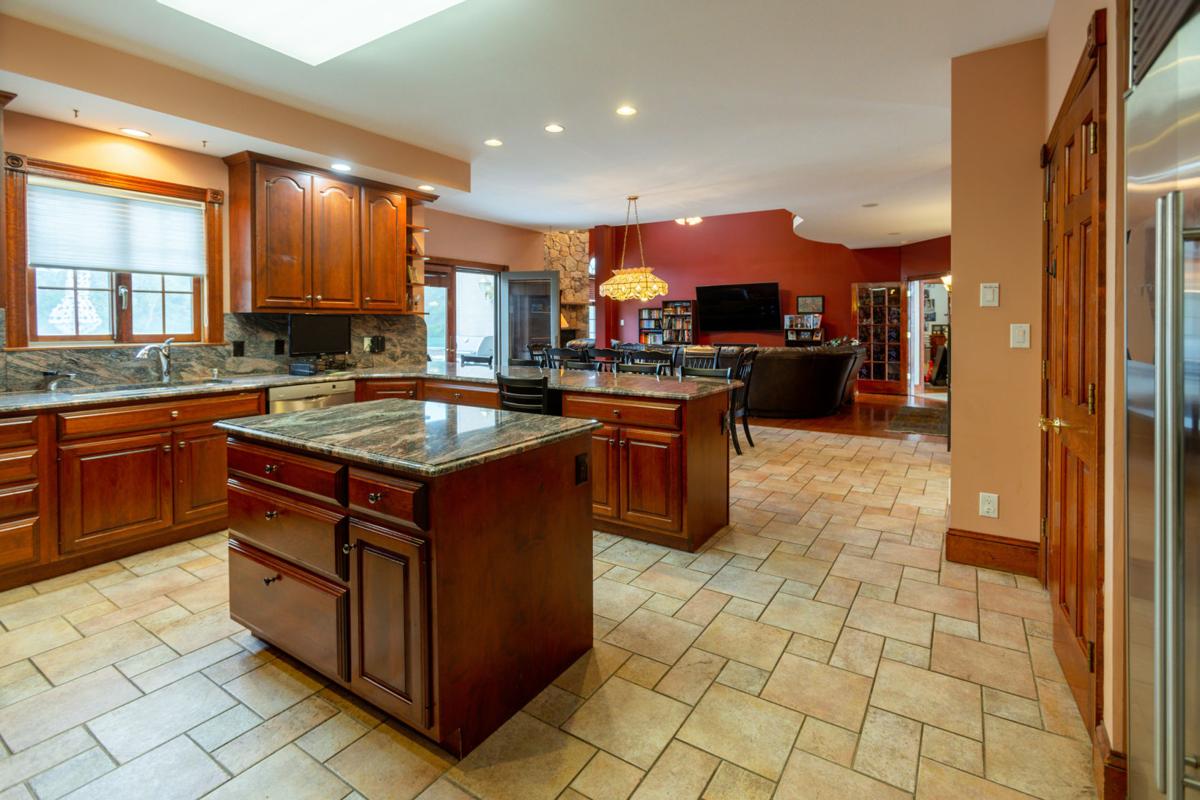 An oversized traditional kitchen is ideally suited to the cultivation of culinary creativity. 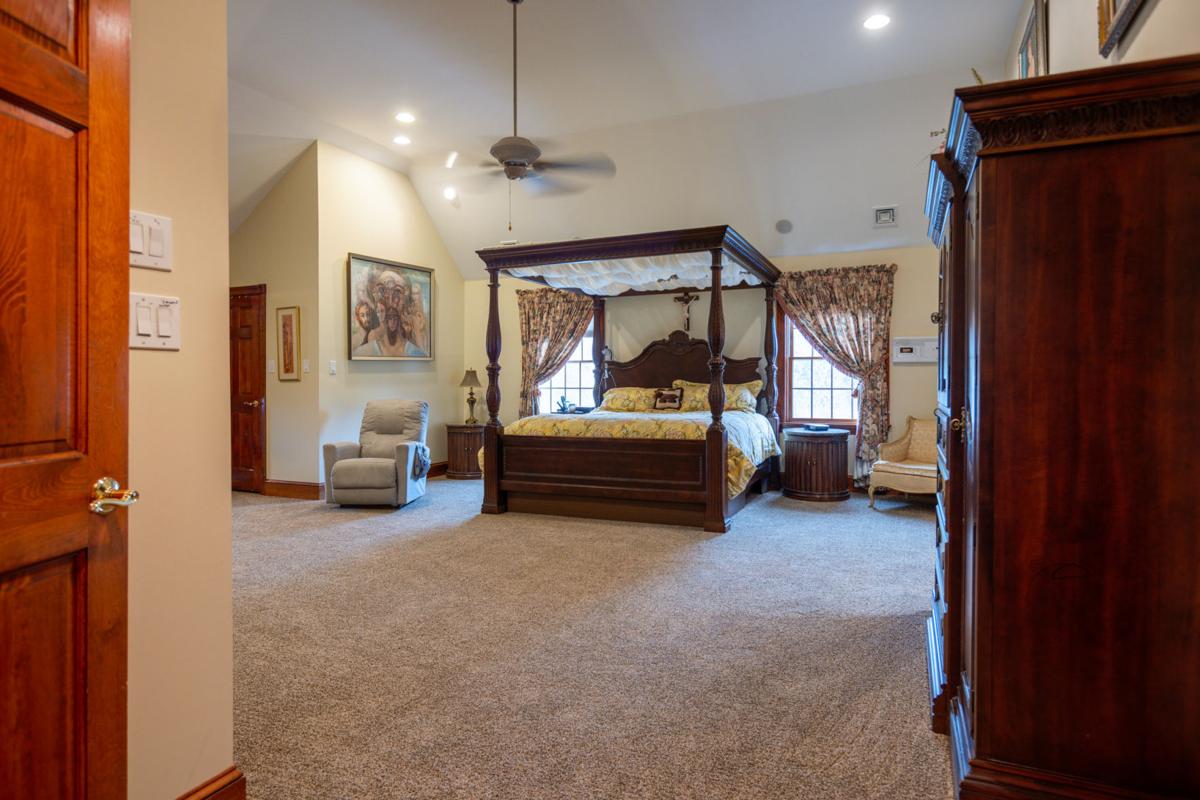 The huge master bedroom suite has enough room for a luxurious canopy bed (which is one of the furnishings that’s negotiable). 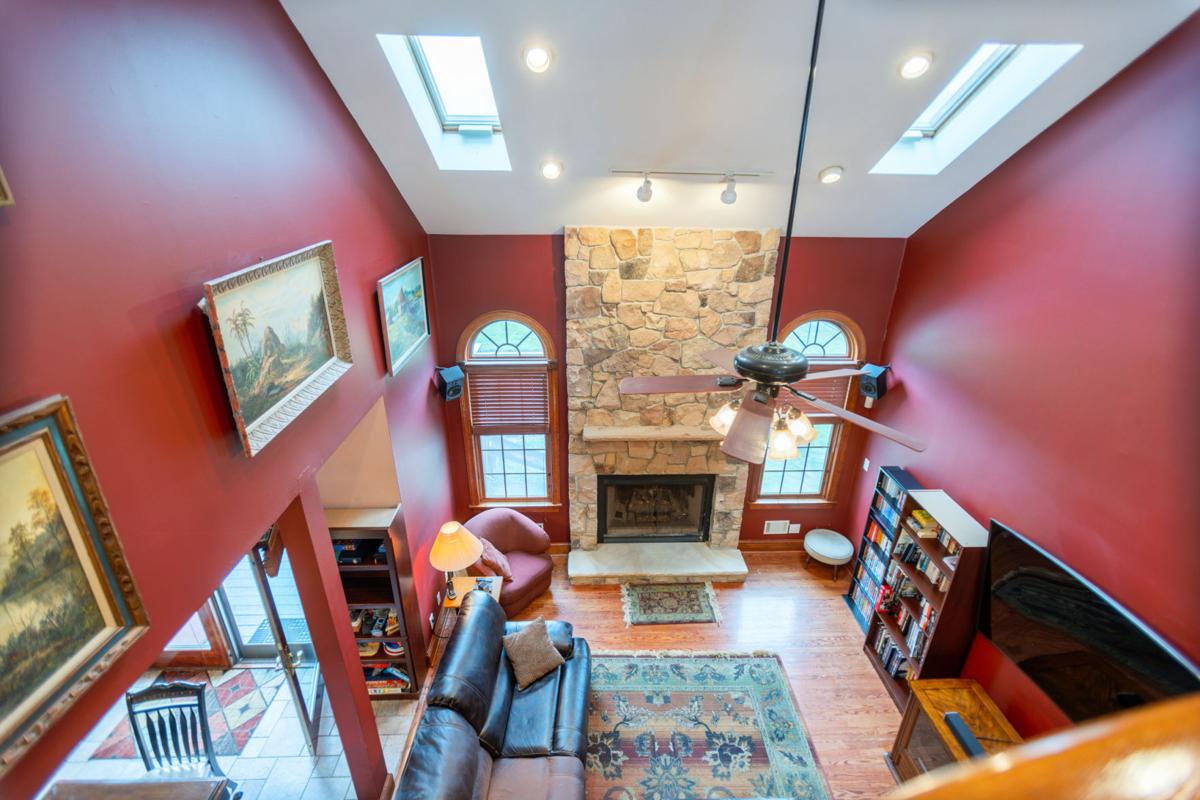 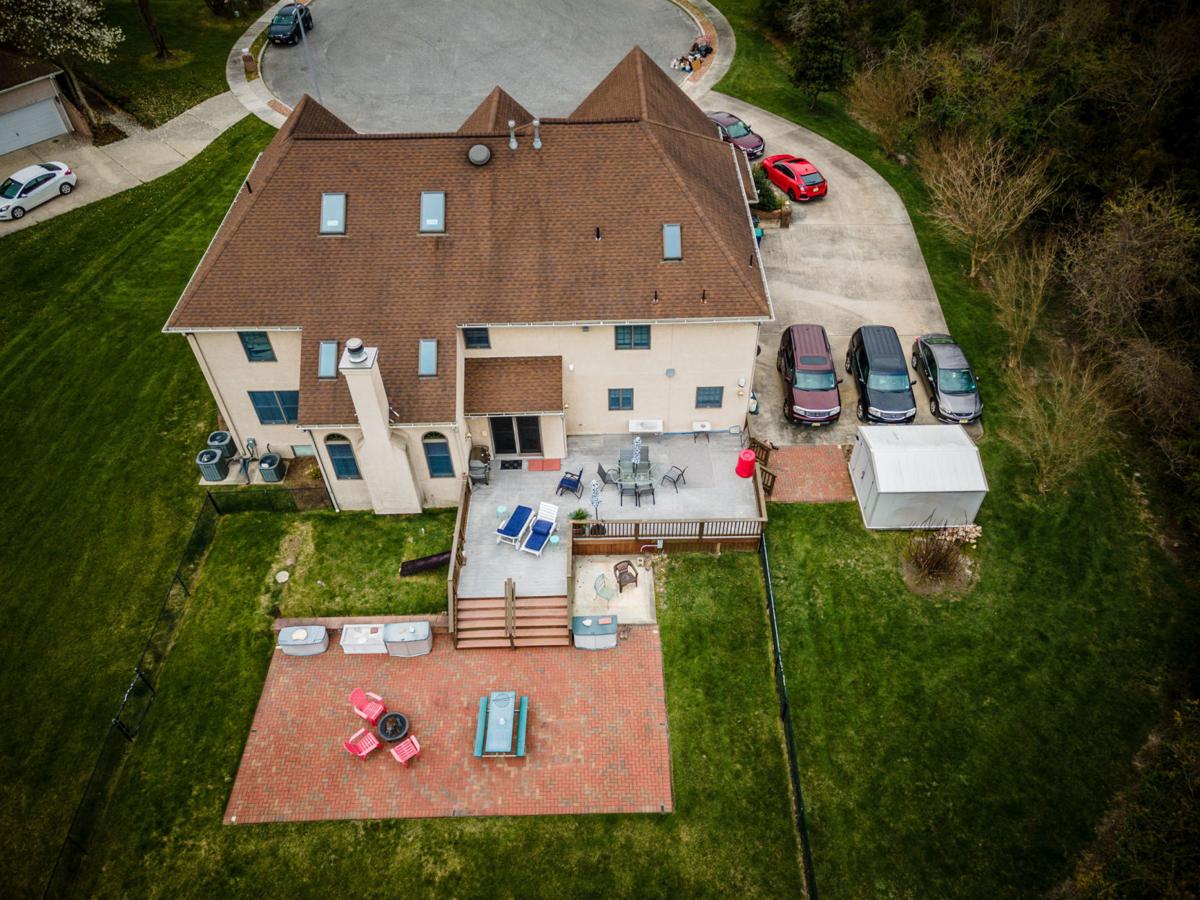 The spaciousness of the rear deck, patio and yard can be seen in this aerial shot, along with the ample parking the driveway offers for additional vehicles.

BILL BONVIE For the Press

In these turbulent times, when the ultimate objective of many house hunters is finding an idyllic, comforting and aesthetic environment in which to raise a family, the two-story, multi-gabled brick home now on the market at 15 Osprey Court in Egg Harbor Township is precisely the sort of property that might well cause a young couple to look no further.

Having lived there with their own three children for the past 22 years, the current (and original) owners, Mark and Josette Barbera, say they can’t imagine a better place to have brought them up— and have only reluctantly decided to sell the four-bedroom, four-and-a-half-bath home now that they’ve reached the point of nearing empty nester status and no longer needing anywhere near all the space it provides.

But prior to doing so, they put quite a bit of money and effort into upgrading this quite resplendent residence situated at the end of a picturesque cul-de-sac surrounded by wooded acreage. The resulting improvements have made it in many ways the equivalent of a newly built home, yet one that has the advantage of having proven to be an ideal setting for forging fond memories over a period of years and could easily serve the same purpose for a new family.

“I would describe this house as being extremely well built and detailed,” says Mark, citing its particularly robust 2 x 6 construction that gives the walls greater depth, steel-beam support, solid oak flooring (as well as marble and tile in a cement bed), custom trim work and poured basement walls. “While it is quite large and spacious, and may even appear grandiose to a visitor, it’s also a very warm and inviting place to live—the kind of tranquil atmosphere where you can just kick off your shoes, put your feet up, relax and decompress.”

Among the features that help contribute to that sense of serenity are a congenial family room overlooked by a second-floor balcony, complete with a lovely traditional floor-to-ceiling stone hearth and built-in gas-log fireplace that’s also a source of radiant heat (and could be converted back to a wood-burning unit should a new owner desire), as well as a vaulted ceiling containing two electrically controlled skylights. Complementing the charm and functionality of that room is the tiled traditional kitchen into which it flows, which includes a breakfast bar with seating for six (as well as a kitchen table that seats 6-8 in front of a double glass door to the patio), an abundance of cherrywood cabinets and granite countertops, and an assortment of high-end stainless-steel appliances that include a six-burner Viking stove, a Dacor double oven, and Sub-Zero refrigerator/freezer.

Equally soothing to the spirit and conducive to family activities is the home’s enticing exterior, with its wide deck that looks out over a pavered patio and luxuriant, colossal-size fenced-in yard and the ambience of the forested surroundings, which is inhabited by a family of deer and a colorful variety of birds and includes a nearby lake. In addition, its secluded setting, which gets no outside traffic, is an especially safe one for a family with young children.

There’s also a super-size master suite with a separate sitting room and bath equipped with double sinks and a Kohler Whirlpool tub; a large, semi-finished basement with its own full bathroom, custom storage shelving and a hardwired ethernet connection that can serve as either a playroom, recreation area or gym for which it is currently used; laundry rooms on both the first and second floors; a walk-up attic with two skylights for ventilation, and an attached three-car side entry garage, complete with an independent heating system, custom-built shelving and doors with new sealing (both of which are electric), as well as plenty of exterior parking space for multiple vehicles.

As for those aforementioned upgrades, they include a brand new three-zone heating and air conditioning system, a recently installed energy-efficient hot water heater, and a new roof ridge and ventilation system. Other amenities include Andersen Windows and double patio doors; a central vac system throughout the house (including the basement); a speaker system hook-up in the family room, dining room and outdoor deck; interior and exterior security systems; cast iron bathtubs; a roofline lighting system, and an electrically controlled drop-down chandelier.

Given all its improvements and extras, Mark believes the property is a real buy for a couple who are looking for “a little more house for their money compared to similar property on the barrier islands” yet one that’s within just a few minutes’ drive of area beaches. “I don’t think you could start from scratch and come anywhere near our asking price ($975,000), given the current economic environment with soaring commodity prices” he says. “Our homeowners insurance current replacement value even comes in around 15 percent higher than our asking price”.

And that’s not to mention a location that’s only a five-minute drive from the Somers Point ShopRite, as well as in close proximity to other major retail facilities, and just across the street from the Harbor Pines Golf Course, which is open to the public, along with being easily accessible to both northbound and southbound Garden State Parkway interchanges.

In addition, many of the home’s high-end furnishings are negotiable, as is some of the art now adorning the walls (which includes paintings by George Miller, a well-known artist who was also Josette Barbera’s grandfather).

To be sure you don’t miss out on the chance to acquire this spectacular property, which has an asking price of $975,000—considerably lower than that of much smaller ones on nearby Absecon Island— you should waste no time in contacting listing agent Donna M. Palazzo Burnside of Balsley/Losco Realty in Ventnor at (609) 412-6917 (cell phone number) or at (609) 437-2295 (office number), or by emailing palazzo75@comcast.net.

The shocking amount of money people spend on their pets annually

The shocking amount of money people spend on their pets annually

Avoid being a victim of car theft with these simple tips

Avoid being a victim of car theft with these simple tips

For a buyer seeking an income-generating resort home, this Lower Chelsea Tuscan-style triplex is a real trifecta

It’s not very often these days that a beach-block triplex comes on the market at the Jersey Shore, let alone one as beautifully restored and e…

The two-story, four-bedroom, three-and-half-bath home at 115 S 18th Ave. in Longport is a striking example of the kind of property that’s beco…

The cities with the highest rates of mortgage delinquency

When the COVID-19 pandemic reached the U.S. in 2020, the public health crisis was accompanied by an economic disaster as well. For many, one of the biggest worries was housing, with homeowners concerned about falling behind on mortgage payments.

The price of a home (or apartment) in major US cities

Access to affordable, quality housing is associated with a variety of positive economic and social outcomes. But historically, affordable housing has been out of reach for many.

Maybe it’s a loud crash overhead. Maybe it’s shattering glass. Maybe it’s a steady drip of water coming down from your kitchen ceiling. For a homeowner, any of these sounds…

Despite high demand in both home purchases and mortgage refinancing, many lenders have tightened up their borrowing standards due to the economic uncertainty of the pandemic, and hopeful loan applicants may find it hard to get approved.

Having lived there for 22 years, its original occupants have added numerous upgrades to this magnificent, yet warm and inviting four bedroom, four-and-half bath residence that is now just a bit too roomy for them.

An oversized traditional kitchen is ideally suited to the cultivation of culinary creativity.

The huge master bedroom suite has enough room for a luxurious canopy bed (which is one of the furnishings that’s negotiable).

The spaciousness of the rear deck, patio and yard can be seen in this aerial shot, along with the ample parking the driveway offers for additional vehicles.