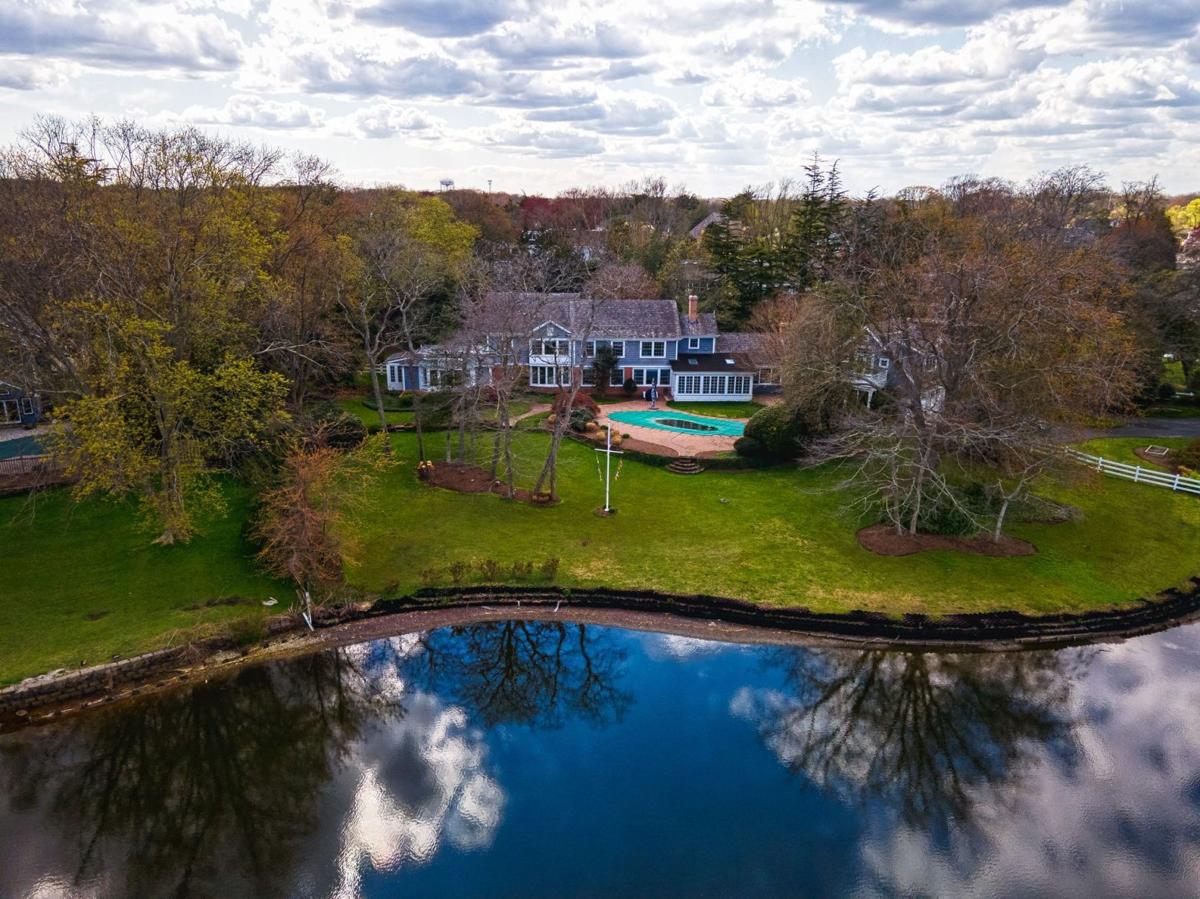 Endowed with magnificent surroundings and a spectacular view, the property is one that’s been gradually transformed into a unique resort retreat rivalling many far pricier homes in terms of both space and elegance. 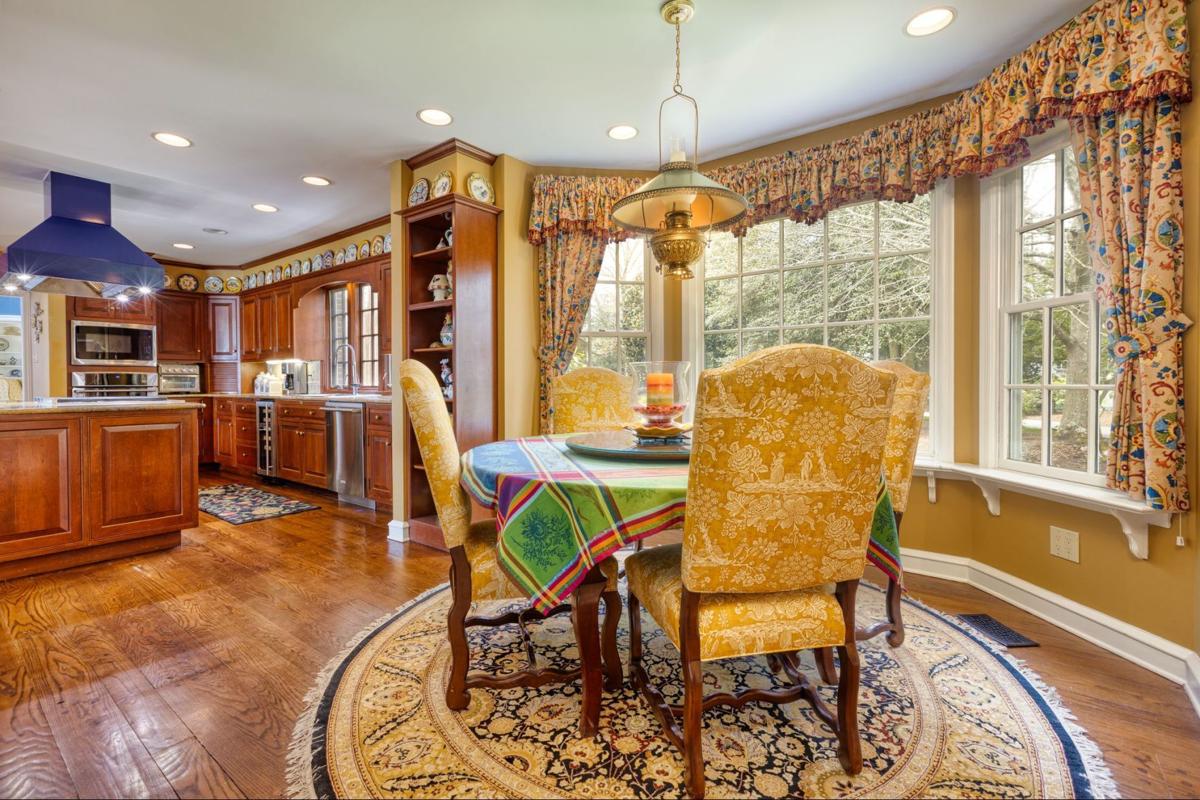 A breakfast nook adjacent to the kitchen is bathed in natural light from its own bay window. 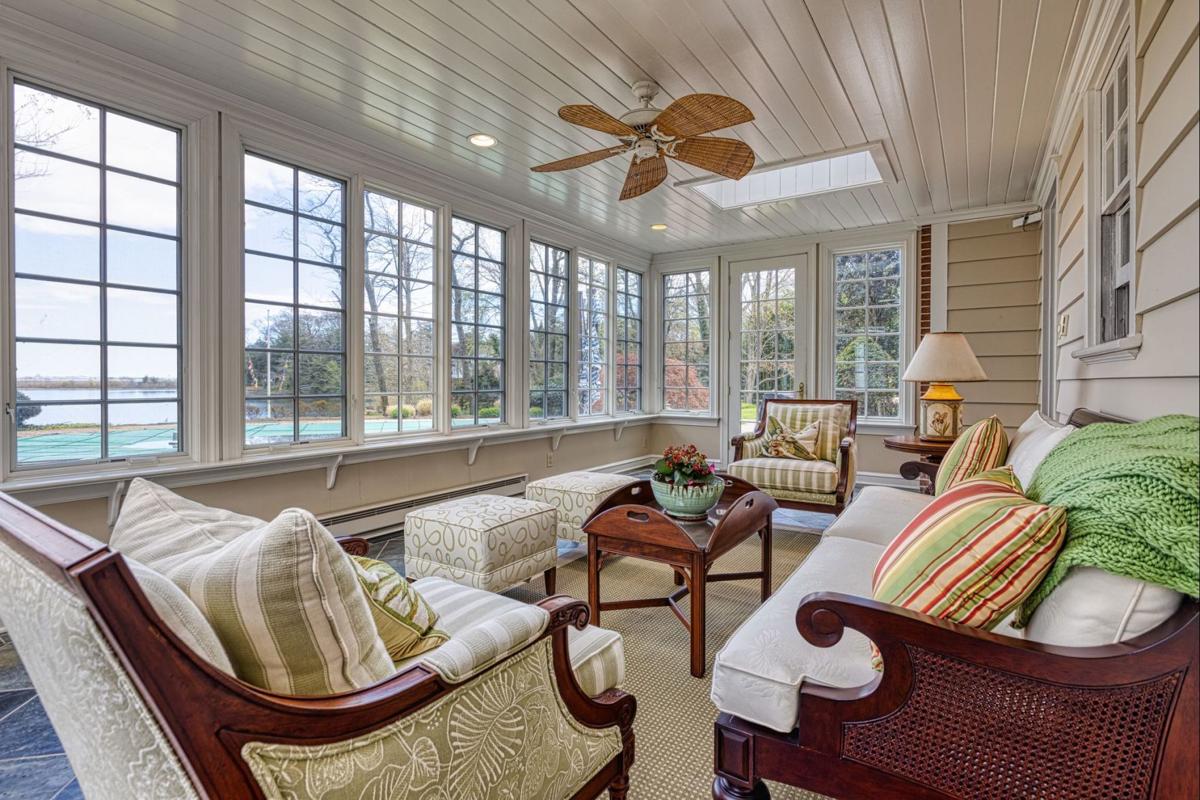 The Florida room offers a spacious place to relax or entertain guests while enjoying the home’s spectacular view. 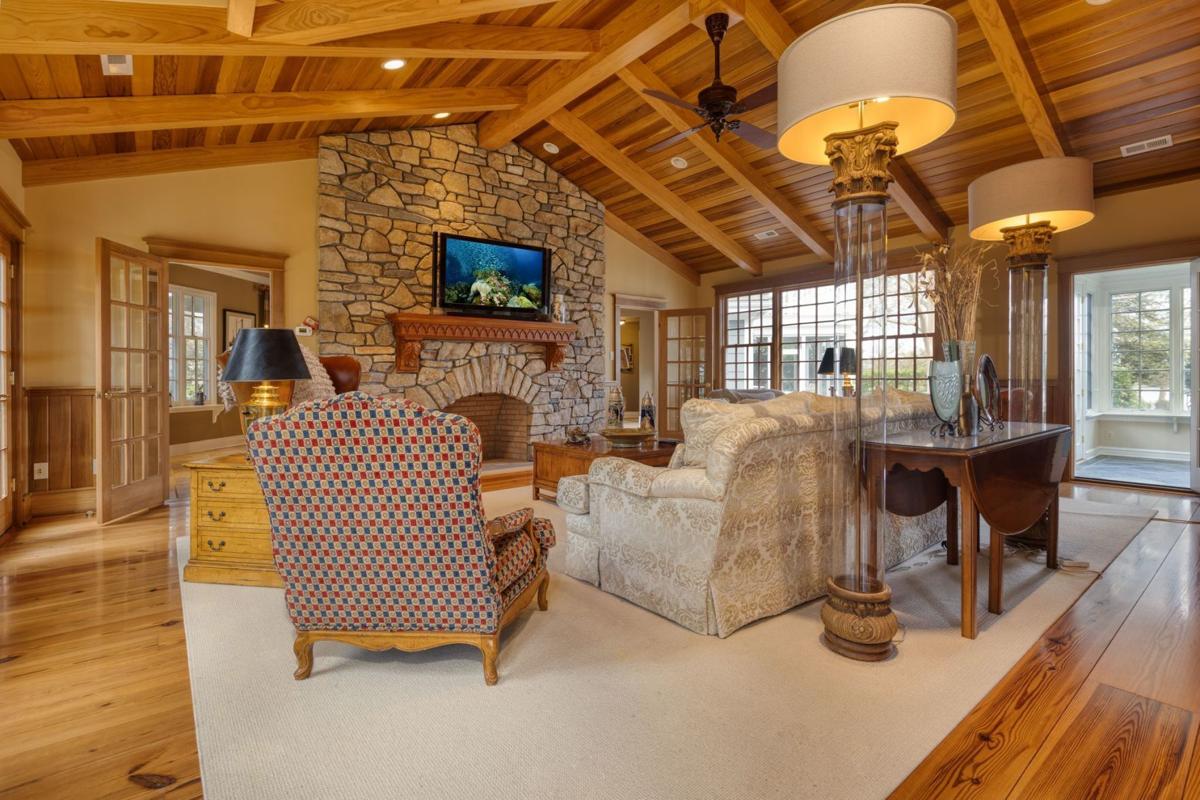 The aptly nicknamed “Aspen Room” has all the trappings of a ski lodge, complete with a beamed, vaulted ceiling and cozy wood-burning fireplace with a floor-to-ceiling stone mantelpiece.

A dedicated bar, which opens onto the back yard via French doors, provides an ideal, all-weather venue for hosting gatherings and parties. 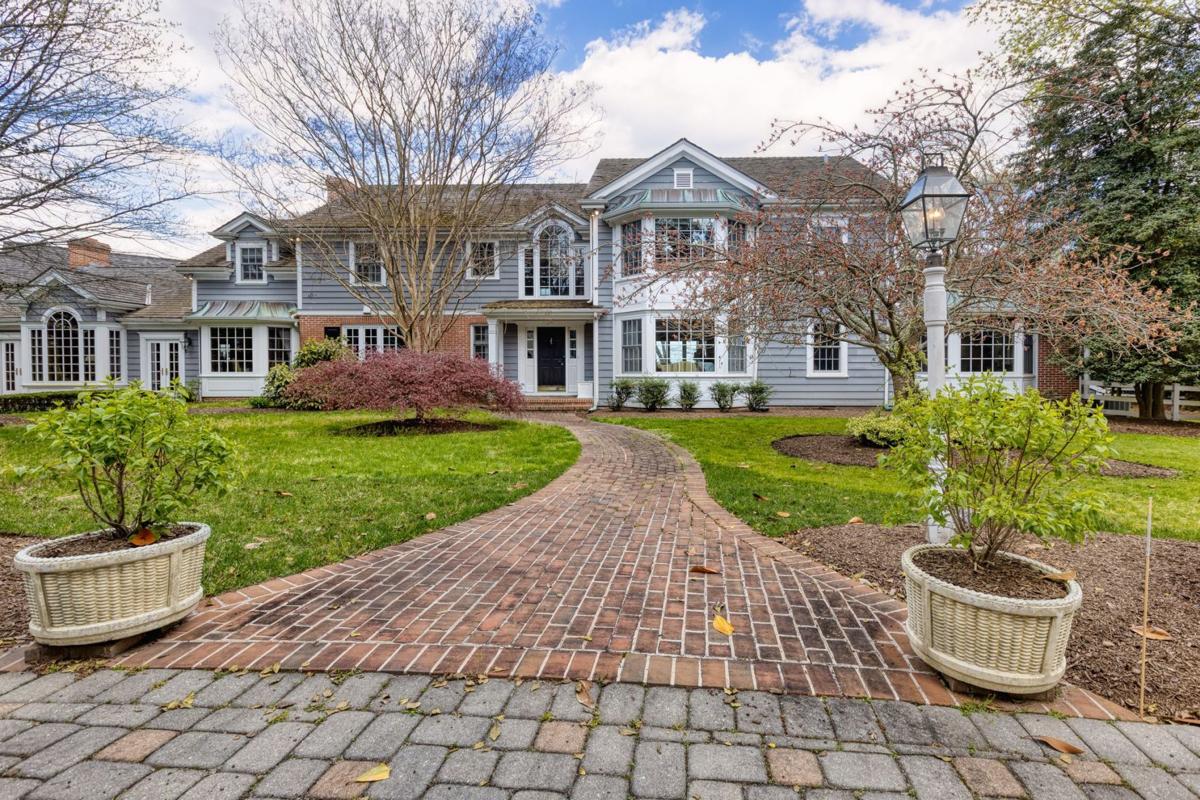 One of the beauties of the Jersey Shore for anyone looking to purchase a vacation home (or a year-round resort residence) is its diversity — the fact that the possibilities it offers extend to scenic and secluded settings situated within close proximity to the area’s beaches, boardwalks and attractions. The Linwood neighborhood known simply as Duck Pond perhaps best exemplifies such a lovely locale — and, for the buyer who appreciates its aesthetic attributes, now offers a rare opportunity to acquire a most unique property that has just come on the market there.

Endowed with nearly 9,000 square feet of living space, this 15-room, six-bedroom, seven-and-half-bath residence at 121 E. Edgewood Ave. combines the delights of serene natural surroundings that include a variety of mature trees (including several magnolias), an English garden and a verdant lawn that gradually slopes down to the pond with a magnificent, sweeping view of the Atlantic City skyline across the bay that can be enjoyed from every window in the back of the home.

The house itself is one that might seem a bit overwhelming at first sight, until you realize that it’s actually a compound (not unlike that legendary one in Hyannis Port), having been gradually enlarged and expanded over the years by owners Christine Menghetti and her husband Richard to provide their children and grandchildren with “an ideal resort-type destination where everybody could spread out,” as she puts it, yet is just within just a few minutes’ drive of both Ocean City and the seaside communities of Absecon Island, as well as Atlantic City.

Among the features that have been added during that time, and that make this home an ideal venue for entertaining (or perhaps even a wedding), are a heated in-ground swimming pool and adjacent patio area; a large dedicated bar with a tile floor and television, that opens onto the back yard and pool via French doors (and also has its own porch); a wide and opulent Florida room with slate floors, two skylights, and a wall of windows that look out on that spectacular view, and a custom-designed interior gathering place that may just prove irresistible to those who find an alpine atmosphere as alluring as the spell of the seashore.

The latter, Menghetti notes, has been nicknamed “the Aspen room,” by virtue of its resemblance to a ski lodge, with trappings that include a vaulted, beamed cathedral ceiling and a striking stone mantelpiece and fireplace which can either serve as a traditional wood-burning unit, given that it has its own full-fledged chimney, or be alternately equipped with a gas log, an unopened gas line having been extended to it for that purpose. The overall effect could be described as that of a chalet within a chateau (the latter term being one that might also describe this majestic home).

That room, incidentally, now occupies the area once used for a two-car garage that has since been replaced by a much larger one with ample space to accommodate three vehicles and all manner of recreational gear. There’s also a private studio apartment above it that Menghetti notes would make a great-in-law suite, since it includes a kitchen equipped with what she refers to as “the whole nine yards” of appliances.

The home’s main kitchen is a humongous one containing a bevy of newer, high-end, stainless steel appliances that include a Wolf range, an Electrolux oven, microwave and dishwasher and Viking hood, as well as having both a counter for casual meals and an adjacent breakfast nook that’s bathed in light from its own bay window, and a second wood-burning fireplace. Among the other notable attributes of the residence are a library; a screened-in porch; two laundry areas, including one in the bar; a full bathroom and shower accessible to both the bar and pool; a third fireplace (this one equipped with a gas log) in the living room; a circular driveway enhanced by a fountain, and the fact that its location is well above sea level and requires only a nominal amount of flood insurance.

“One of the remarkable things about having a house this large is that it still has a certain coziness to it,” Menghetti says. It’s also what she calls a “bird-watcher’s paradise,” attracting a wide variety of species, including swans which can frequently be seen on the adjacent pond.

The asking price for all of that, $1,589,000, is far less than the collective cost of the upgrades, additions and improvements that have been put into this edifice, according to Menghetti, who believes that “you couldn’t build a house like this today for anywhere near that amount of money.” Things like drapes and window treatments are included in the price, while other items are negotiable should a new owner wish to retain them, she says.

To arrange for a tour of this truly majestic resort property, qualified buyers should contact listing agent Paula Hartman of BHHS Fox and Roach in Margate either at (609) 271-7337 or at her office number (609) 487-7234, or email her at redheadedrealtor@aol.com.

Pandemic stress is here to stay

Given today’s red-hot residential real-estate market, many families may be left with the impression that the so-called American dream—that of …

If an ‘upsized’ resort residence is what you’re after, you shouldn’t miss this Ventnor beach-block beauty

An iBuyer can help you to sell your house quickly by skipping some of the hassles of having a home on the market and letting you set your own timeline. But…

Endowed with magnificent surroundings and a spectacular view, the property is one that’s been gradually transformed into a unique resort retreat rivalling many far pricier homes in terms of both space and elegance.

A breakfast nook adjacent to the kitchen is bathed in natural light from its own bay window.

The Florida room offers a spacious place to relax or entertain guests while enjoying the home’s spectacular view.

The aptly nicknamed “Aspen Room” has all the trappings of a ski lodge, complete with a beamed, vaulted ceiling and cozy wood-burning fireplace with a floor-to-ceiling stone mantelpiece.

A dedicated bar, which opens onto the back yard via French doors, provides an ideal, all-weather venue for hosting gatherings and parties.