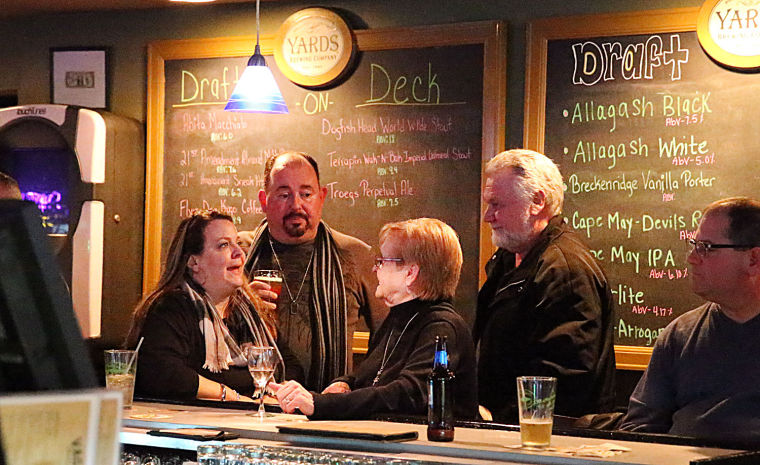 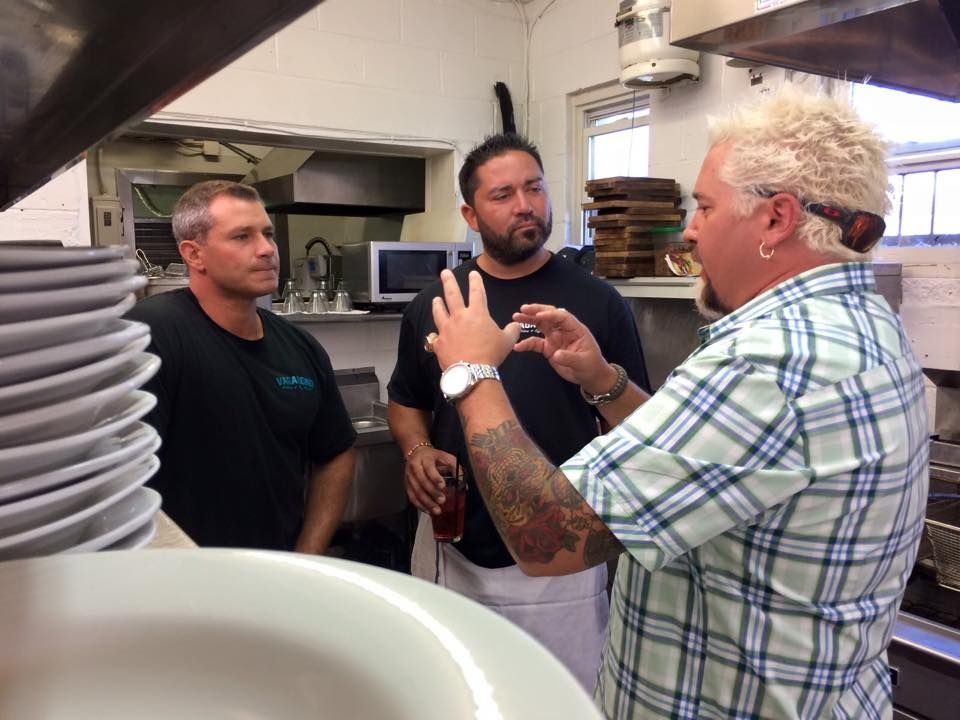 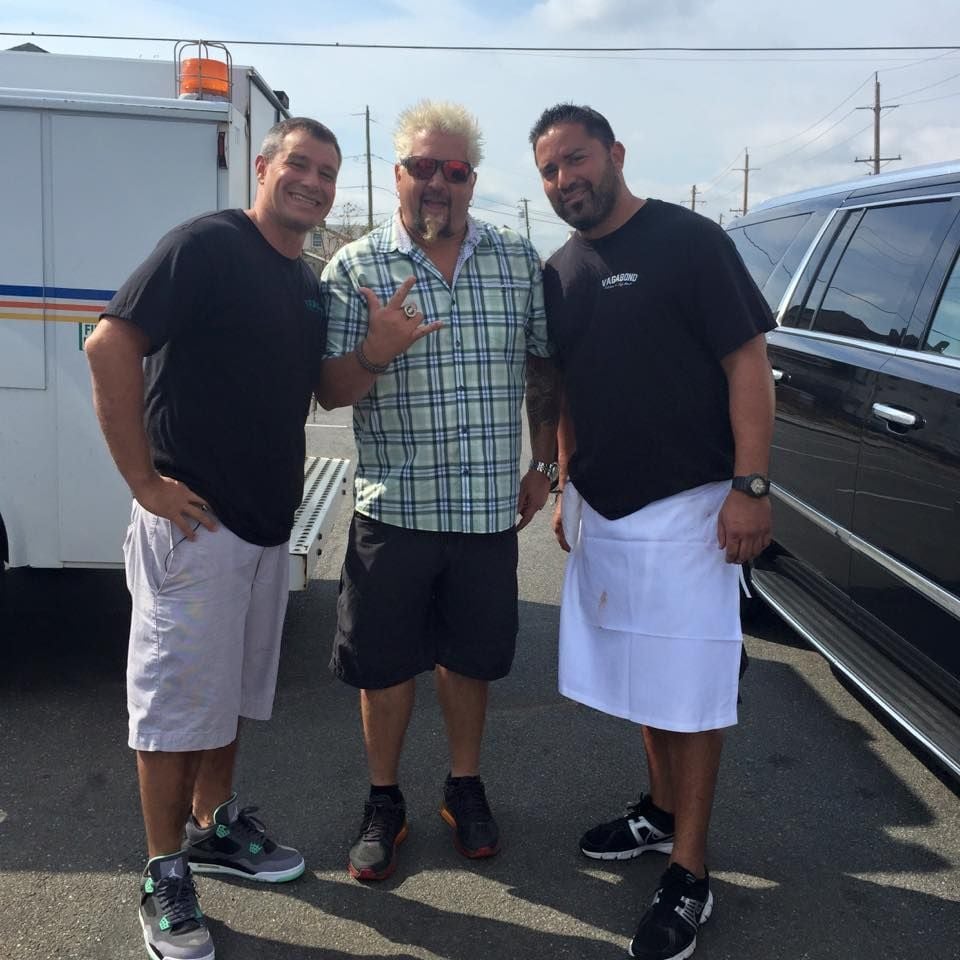 Vagabond Kitchen & Tap House is getting ready to capitalize on its upcoming close-up on the Food Network.

The Atlantic City tavern’s staff taped with host Guy Fieri and the “Diners, Drive-Ins and Dives” production crew at the beginning of October.

With their episode coming up Jan. 22, manager Kevin Wiener said they’re taking Fieri’s advice to promote the restaurant’s involvement with the show any way they can.

“We’re going to have a billboard. The fact that we’re on the show is already on our menus,” he said. “We’re trying to get everything we can on it.”

Vagabond and Pleasantville’s Sam’s Rialto Bar & Grill are the next in a line of South Jersey eateries to be featured on the Food Network show. Piccini Wood Fired Brick Oven Pizza in Ocean City got its turn Dec. 18.

There are rumors that Guy Fieri is back in South Jersey, touring his signature red Camaro to…

Taping with Fieri and his production crew went easily for the “Between the Bread” episode, Wiener said. Most of the cooking with Fieri was done with Vagabond co-owner Elvis Cadavid.

“People come in, they ask what (Fieri) ordered,” he said.

For the answer, look no further than Vagabond’s Three Way and Turkey Apple Brie sandwiches. Fieri also was on hand to make the tavern’s Tequila Shrimp Bangers, crispy shrimp tossed in a tangy sauce.

All of the items on Vagabond’s online menu featured in the “Diners, Drive-Ins and Dives” episode are already labeled with three stars, denoting they are “Triple D Approved.”

Wiener said he’s been in touch with other Atlantic County places that have been in Fieri’s spotlight, including the Anchorage Tavern Restaurant in Somers Point and Oyster Creek Inn Restaurant and Boat Bar in Leeds Point in Galloway Township. The sentiment is the same: Get ready for a lot of business.

“It’s about time,” Wiener said of South Jersey spots getting national attention. “I grew up here. We’ve always had some of the best restaurants. The food is the best part of this place.”

Jake Hunter co-owns Sam’s Rialto Bar & Grill with his mother, Brenda Hunter. New customers, some driving more than a couple of hours, have already eaten at his restaurant after hearing it will be on “Diners, Drive-Ins and Dives,” Jake said.

It’s fitting that their Pleasantville soul food spot is one of three restaurants getting air time at 10 p.m. on Jan. 15; the specific episode is called “Family Legacies.”

The dishes in the Triple-D episode — Hunter said Fieri and his mother cooked fried chicken and waffles, as well as barbecue spare ribs and collard greens — are classics to Sam’s original menu, with a twist.

Jake Hunter said the family only started serving waffles with its well-known fried chicken about 15 years ago; and the spare ribs are no longer cooked in a pressure cooker, as his dad had done.

A large part of the vetting process before taping started at Sam’s was to make sure ingredients were fresh, Hunter said.

“I want to say we had three or four interviews that went on for multiple hours,” he said. “They wanted information on how much freezer-to-refrigerator space we had, they went through the whole menu.”

Jackson coached Hunter through what he could expect with the taping — “The staff and producers were so cool, and Guy was laid back” — and told him to expect to see more and more customers after the episode premieres and re-airs.

“I’m very anxious and excited for the episode to come,” Hunter said. “We want to keep growing the business and keep the food to my dad’s standards.”

Sam’s Rialto has gone through a roller coaster in its 30 years of operation, Hunter said, including his father’s death in 2007, a couple years after he came on board to run the restaurant. Hunter only hopes his dad is proud of his and his mother’s work.

“We love this experience, everything was amazing,” he said. “This is definitely a new up.”

Although it’s been five years since the Triple-D episode featuring “Maui’s Dog House” aired, its owners still see the effects of the national spotlight.

The seasonal restaurant in North Wildwood just finished its 16th summer with its menu of traditional German hot dogs with non-traditional toppings, hand-cut fries and burgers.

Michael “Maui” D’Antuono and his wife, Liz, said their lives changed forever after their appearance on “Diners, Drive-Ins and Dives.”

“At that time, Triple-D was the No. 1 show on the Food Network,” said Liz D’Antuono. “Out of thousands of restaurants, they picked us. We’re 400 square feet. It was a needle in a haystack.”

Customers asked the couple to sign their T-shirts and take photographs. Liz D’Antuono said she was humbled. “I pour sodas,” she said, laughing.

Taping for Triple-D wasn’t their first foray with the Food Network. A year before, Maui’s Dog House was featured on a Food Network special called, “Sunny’s Summer Eats” with personality Sunny Anderson.

Once the “Diners, Drive-Ins and Dives” episode premiered, Maui’s was slammed, the owners said. They started implementing a reservation system to accommodate the crowds. The couple expanded Maui’s Dog House in 2012, and rebuilt it when it got flooded by Hurricane Sandy.

Amid the growing customer base, the couple said they’ve kept the quality of their food the same. It took a little while to adjust to the thousands of hungry mouths, instead of the usual hundreds.

“We’ve seen customers get married, have children. It becomes a family tradition,” Michael D’Antuono said. “That’s what makes everything else irrelevant.”

In more than 75 years of business, the Oyster Creek Inn Restaurant and Boat Bar hasn’t seen a busier season than the one that came in Triple-D’s wake.

“As soon as the episode aired, the phone was nonstop for the next several days,” he said. “We saw about a 400 percent spike in web hits.”

Oyster Creek Inn was one of three area restaurants featured in “Diners, Drive-Ins and Dives” from the South Jersey area that winter season. Prior to the December premiere, Kuppel said, the restaurant advertised the show on social media. A screening was held on Dec. 12 on a big projection screen for family and friends.

Since the episode, Oyster Creek Inn extended business hours and started serving lunch seasonally, he said. The dishes host Guy Fieri made on the show are now marked with a “Diners, Drive-Ins and Dives” logo. They’re the restaurant’s biggest-selling dishes, next to the crab cakes.

Some of the customers who’ve come to Oyster Creek Inn after the show drove hundreds of miles to taste Kuppel’s food, he said.

“I’ve met many customers who try to go to all the restaurants featured on the show,” he said.

Oyster Creek Inn has been offered to do another food show, Kuppel said. They politely declined.

It would be a different story if Triple-D came back though.

“I would absolutely do that show again,” he said. “The show depicted Oyster Creek in an extremely positive manner and showed off our unique location and great dishes.

“My advice to other businesses featured on the show is to be ready for a huge spike in business and to be asked, ‘How was Guy?’”

Four food spots share one roof in Galloway: But is it a food court, or what?

GALLOWAY TOWNSHIP —The restaurants at The Exchange like being part of the place, which opened last week with four of them sharing one roof and…

If you always wanted to meet Guy Fieri, Friday, July 29, is your chance.

Guy Fieri is back in town, and it looks like he’s hungry again.

The final batch of Food Network episodes of "Diners, Drive-Ins and Dives" featuring three local restaurants will debut over the next few weeks…

This Leeds Point, NJ, legend has been serving fantastic seafood since 1938. Read more at: http://www.foodnetwork.com/shows/diners-drive-ins-a…