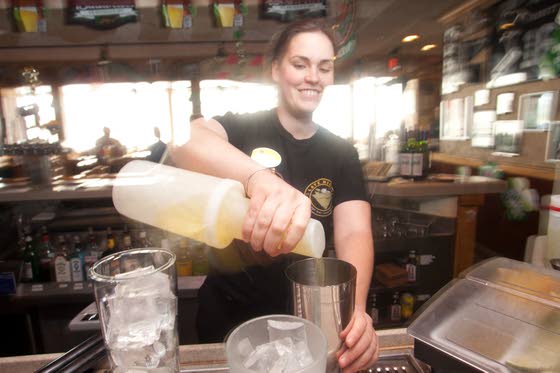 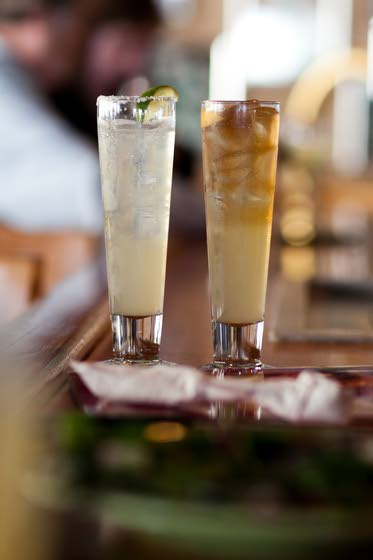 For years, dieters have had to swear off minty mojitos and tequila-kissed margaritas. Sure, they could swill light beers or mix their rum and cokes with diet colas, but the holy grail of cocktails - fabulous mixed drinks with little umbrellas - were taboo.

Now major restaurant chains including Applebee's, Chili's, TGI Friday's and Cheesecake Factory have begun offering reduced-calorie cocktails for those who like a drink or two but don't want to pour 250 or more calories down their gullets at once.

With the U.S. diet industry topping $68 billion in 2010, it's a smart marketing move. But the real question is, how do these cocktails compare to the real thing?

The first major restaurant chain to offer low-calorie cocktails was Applebee's, which offers a 90-calorie mojito, a 100-calorie margarita and a 110-calorie Long Island iced tea. Applebee's spokeswoman Stacy Griffis says the SkinnyBee drinks were introduced in January 2010, along with a series of entrees that were 550 calories or less.

Earlier this month, the Cheesecake Factory began offering its own lower-calorie Skinny-Style drinks and cocktails, including margaritas, mojitos, Long Island iced tea, cosmopolitans and red sangria. Each has 150 calories or less. The restaurant's traditional drinks run about 300 calories.

"People want to enjoy a favorite cocktail and just imbibe fewer calories," company spokesman Mark Mears says. "This is not really a new trend. Light beer has been around for decades. I think the innovation for us is how we take our hand-muddled, handcrafted cocktails and deliver a great Cheesecake Factory experience for less than half the calories."

Applebee's uses tall, skinny glasses for its low-calorie drinks, while the Cheesecake Factory swaps garnishes to distinguish between full- and low-calorie versions. What's in those glasses varies markedly.

The Cheesecake Factory's low-cal cosmopolitan, for example, is nearly indistinguishable from its full-calorie sister. Mojitos did not fare as well at Applebee's.

The bottom line is that typically, low-calorie mixes impart an undeniable, artificial sweetness. Like many low-calorie sodas, the sweetness of these cocktails lingers on the palate much longer than their sugary counterparts. This is not necessarily a terrible thing. Many of us know die-hard Diet Coke fans who swear their low-calorie cola tastes and finishes better than regular Coke.

It comes down to personal taste and, in the end, how much having a half-the-calorie cocktail matters to you when you're out for dinner and drinks with friends.

After a side-by-side comparison of full-calorie and "skinny" cocktails, one thing is clear: The skinny versions have fewer calories, but in general, they're significantly sweeter. Here's the lowdown from our tasting panel.

Margarita: Applebee's signature and tart Perfect Margarita (243 calories, $5.75) nips at the back of the mouth and finishes cleanly. There's a dramatic flavor difference between the original and its SkinnyBee cousin (100 calories, $6.25). The sweet Skinny version is missing the acidity, so it tastes more like sugar-water, and the sweetness lingers on the palate long after the last sip.

Margarita: This classic (about 300 calories, $9) delivers a acidic bite, with sweetness provided by a dash of orange. Its lower-calorie counterpart, the Skinny-Style margarita (about 150 calories, $9), offers the tang of the original, even though the drink is sweetened with a low-calorie mix.

Long Island Iced Tea: The full-calorie version (about 300 calories, $9.75), made with Coke, lemonade and a blend of spirits, is refreshing. The Skinny-Style Long Island iced tea (about 150 calories, $9.75) is made with sugar-free, alcohol-free triple sec, house-made, sugar-free lemonade and Coke Zero. The drink's sweetness lingers, and visually, it's a bit darker than the original - it's also fizzier.

Cosmopolitan: This classic, martini-style drink (about 300 calories, $11.50) is made with Skyy Citrus and Cointreau with a splash of cranberry juice. The Skinny-Style cosmopolitan (about 150 calories, $11.50) is made with sugar-free, alcohol free triple sec and has a slight lingering sweetness, but there is almost no difference in flavor and tang between this and the original.