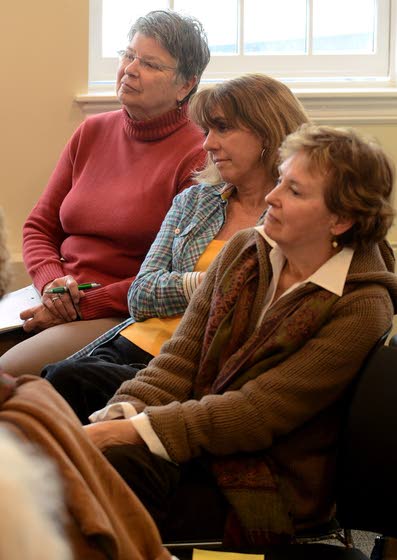 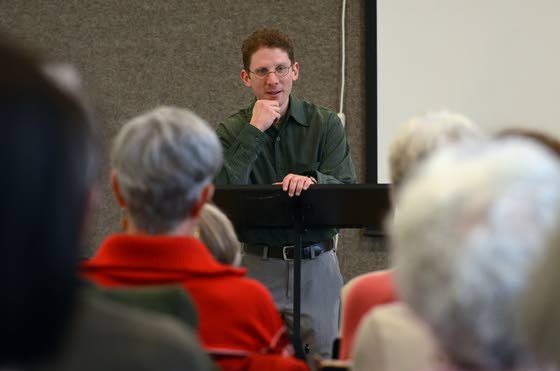 Stockton professor, Neil Aaronson, of Absecon, and his students in "Music in Our Lives" class, run by Friends of Encore Learning of Stockton. The group raises money for scholarships at the college and runs classes from October through April to help do that. Classes meet in Margate, Ventnor and Linwood, mostly at libraries.Thursday, January, 5, 2012 ( Press of Atlantic City/Danny Drake)

Stockton professor, Neil Aaronson, of Absecon, and his students in "Music in Our Lives" class, run by Friends of Encore Learning of Stockton. The group raises money for scholarships at the college and runs classes from October through April to help do that. Classes meet in Margate, Ventnor and Linwood, mostly at libraries.Thursday, January, 5, 2012 ( Press of Atlantic City/Danny Drake)

It's not a long hike to get there - the beach and boards are basically right outside their classroom, which is on the second floor of Ventnor's library. So along with their music-history lecture from Neil Aaronson, a professor at Richard Stockton College of New Jersey, the three friends also work some exercise and fresh air into their curriculum.

That's almost always an option with the classes offered by Friends of Encore Learning of Stockton, or FELS, a group designed to raise money for scholarships at the Galloway Township college by providing learning opportunities to adults - mainly in meeting rooms in the beachfront Ventnor and Margate libraries.

But people come from well beyond those Downbeach towns to get to the FELS classes, which cost $25 apiece for members, and meet once per month from October through April - except for a December holiday break. (There's also a yearly membership fee of $35 per person.)

Many of the classes are taught by Stockton professors, who are paid for their work by FELS, not the college. But none of the FELS courses involve final exams or term papers or any of the other inconvenient details that take the fun out of education for some people - at any age or stage of life.

So Levi Fox, an adjunct professor at Stockton and Rutgers University who teaches a FELS course called Lies My History Teacher Told Me, enjoys the fact none of his Downbeach students ever raise a hand to ask if what he's talking about right then will be on the exam.

Plus because the FELS crowd tends to be a bit older than normal college age - a class included plenty of gray heads among the 35 students - Fox says it's also a pleasure to notice in these classes, "Nobody is ever messing with cell phones."

These students are most definitely there by choice - even if they didn't know they were interested in the subject until they spotted it in the FELS course guide.

Take Sarner, who lives in Galloway Township and is retired from the school system there.

"You could fill a thimble with what I know about music," she said, after a lecture of almost two hours on Music in Our Lives by Aaronson, who clearly knows and cares very much about music - even if his day job at Stockton involves mainly teaching physics.

But as a singer and musician himself, the Absecon resident enjoys passing on his passion for classical music to his students, and they're happy to hear what he knows. When one student asked if he wasn't running a bit late in his class the other day, others piped up to urge him to keep going until he was finished with his chosen composers for the lesson.

Laird lives in Port Republic now, but she used to live in Beach Haven, and she's a lifelong beach fan. The retired English teacher also is no music expert, but says she's happy to have something stimulating to do through the cold-weather months in South Jersey - "whether you live on the shore or on the mainland."

Bev Rubin, of Margate, has been president of FELS for the past four years. (The group has been around for six years, since a Downbeach-based organization with a similar mission and an affiliation with Brandeis University disbanded.)

Rubin teaches two classes on documentary films - her passion - and she goes to others as a student. Her daytime documentary class got so big it had to be moved to the auditorium in the Katz Jewish Community Center in Margate, because neither of the libraries could handle the number of people it drew. She also leads a night class, at a private home in Margate - with room to host about 18 students every month.

FELS is "for people who still want to keep their minds active - and not just by doing crossword puzzles," says Rubin, a veteran of continuing education classes from her days living in New York. She liked going to the Learning Annex, the New School and New York University, and she was looking for something similar when she moved to Margate.

The group's history suggests others share that interest. A few years ago, FELS offered six classes per year, but that number is up to 18 on the current course guide online at felstockton.com. But one course, "Wine Education For Dummies," had to be canceled after potential students were disappointed to discover it wouldn't involve actually tasting any wine.

Beverly Popowich lives in Margate, but she started taking FELS classes before she moved to the shore full-time from Philadelphia two years ago.

"I'm enrolled in about seven classes right now," she says, adding back in Philadelphia, she also kept up her education by auditing classes at the University of Pennsylvania. She enjoyed it - but says at $500 or so a pop, it got expensive.

Her only complaint about FELS is it doesn't go on long enough. So Popowich, 78, would like to see it continue through the spring at least, if not the summer. She's not even worried it could cut down on her beach days, or time out sailing on the family's Hobie Cat, and says she'd be happy to spread the word about FELS to summer friends.

As a Stockton theater teacher, Mark Mallett of Absecon, has gotten some of his colleagues interested in the older students. He teaches play-reading classes - this year's topic is "Playing President," to keep up with current events. He enjoys the FELS crowd partly because "most of them have a fair amount of experience attending live theater" - which isn't a common experience among most college-age (and college-budget) students.

Stockton administrators also like FELS, which is raising a scholarship endowment with a goal of $25,000. That's certainly welcome, says Phil Ellmore, the college's chief development officer, but he also notes when an institution is "connecting with people, and providing services they find beneficial," it can start a relationship that leads to even more financial support later on.

Ellmore can't cite any specific individual gifts that started through FELS, "But I know that in other institutions, they certainly have had that happen," he says, adding adult-ed programs such as FELS are "not an unusual thing" in the higher-education world.

Fox, the Stockton teacher who leads the sort of history-mythbusters class for FELS, also notes it's not unheard of for shore towns to host college classes - Stockton, for instance, owns and runs the Carnegie Library in Atlantic City.

Still, he likes the setting for his FELS class, in Ventnor's library, which also comes complete with its own little local "history museum. It's a great atmosphere," the Somers Point resident says.

Besides, he adds, "You can walk from there right onto the beach." And as fringe benefits go, for students and teachers, that's not a bad one.