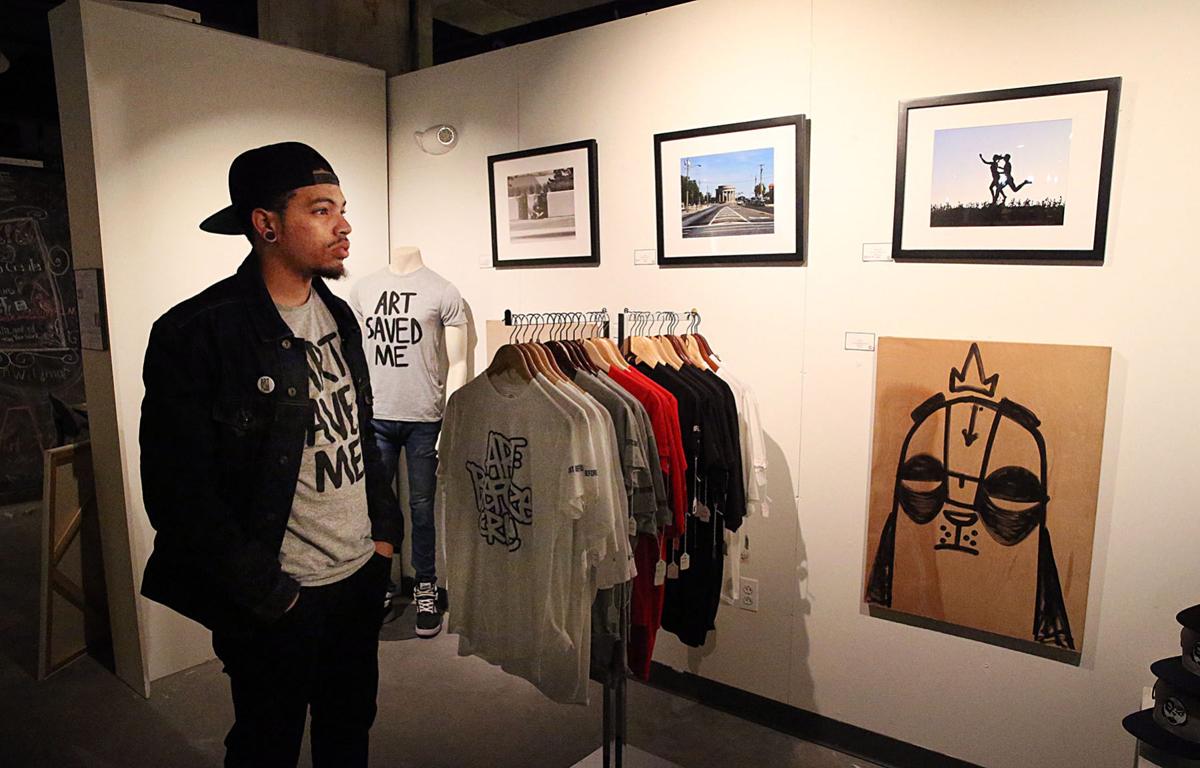 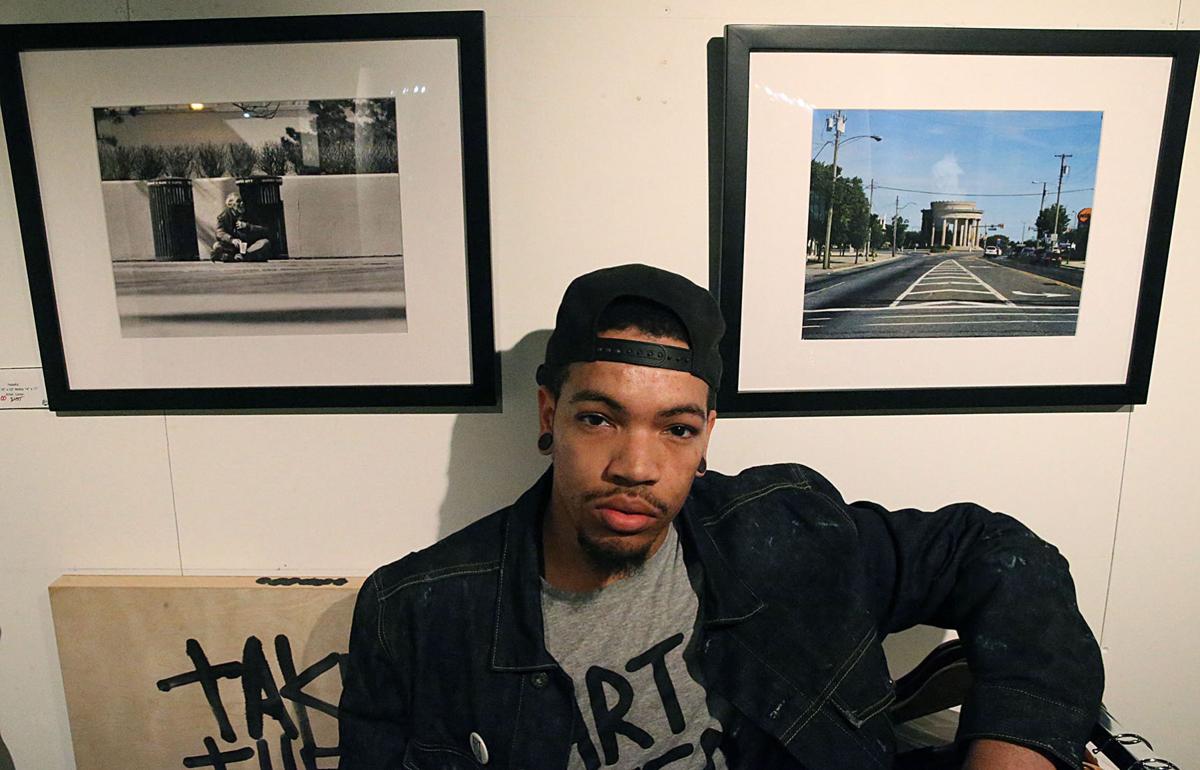 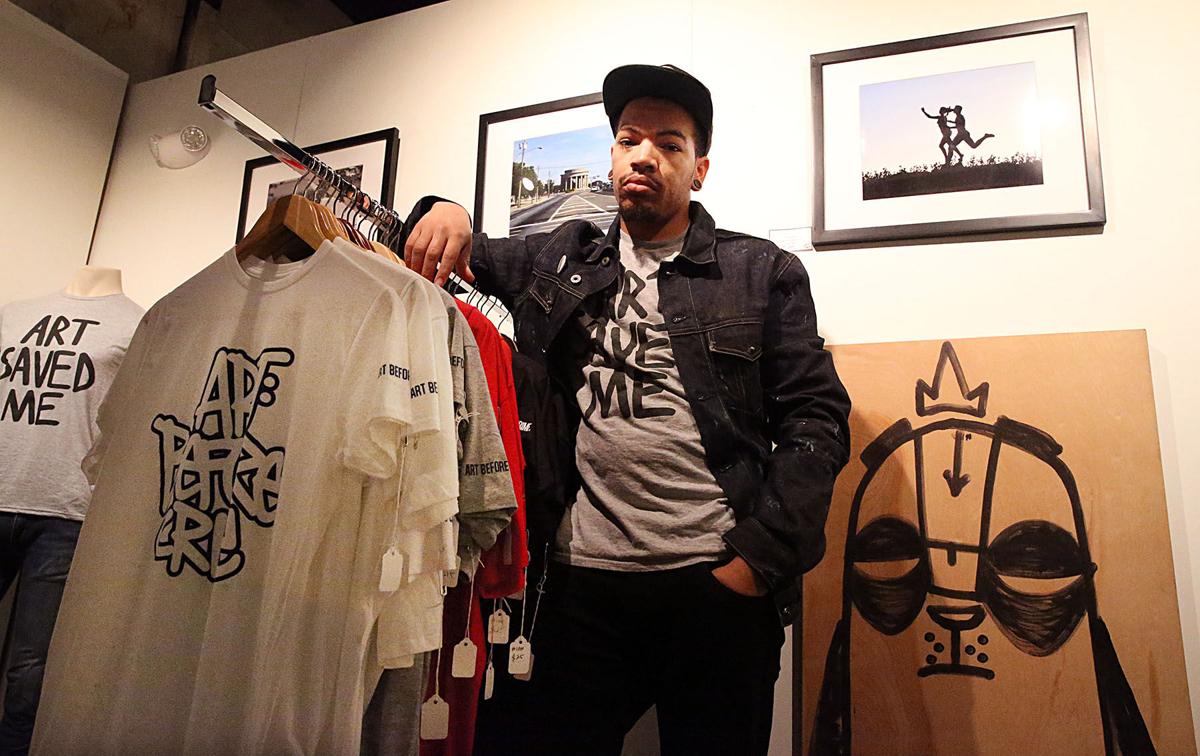 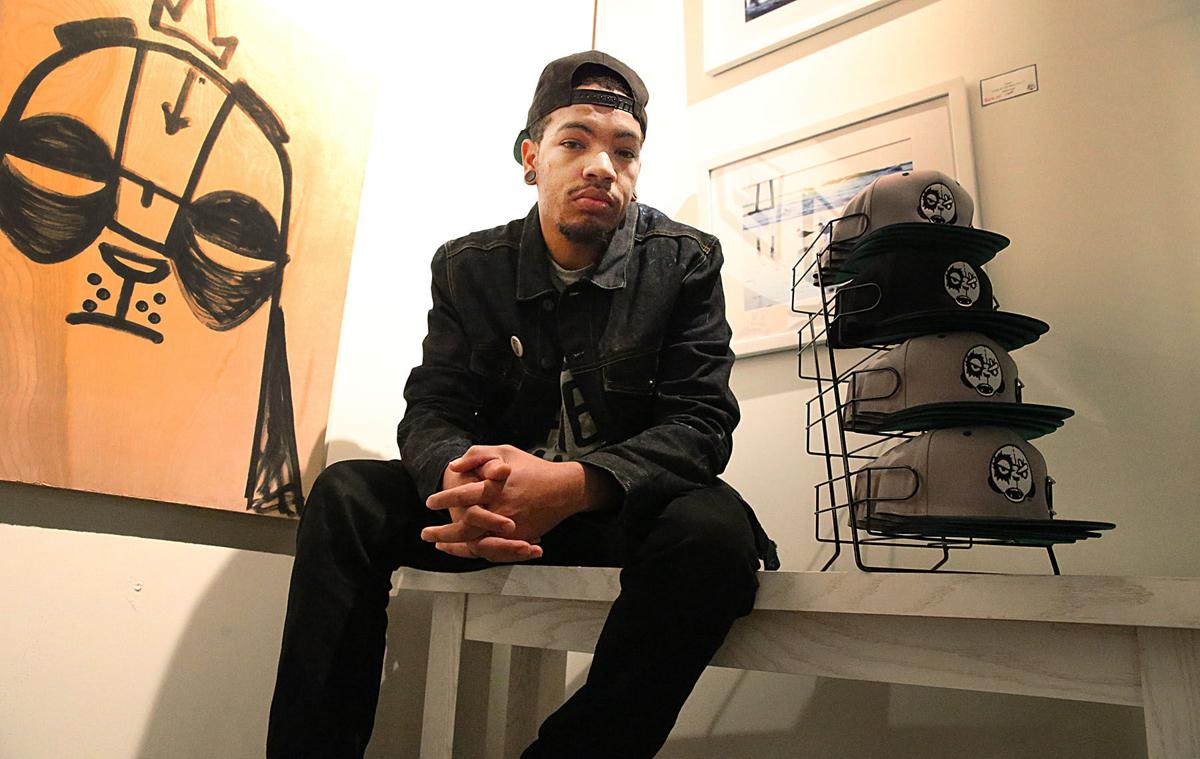 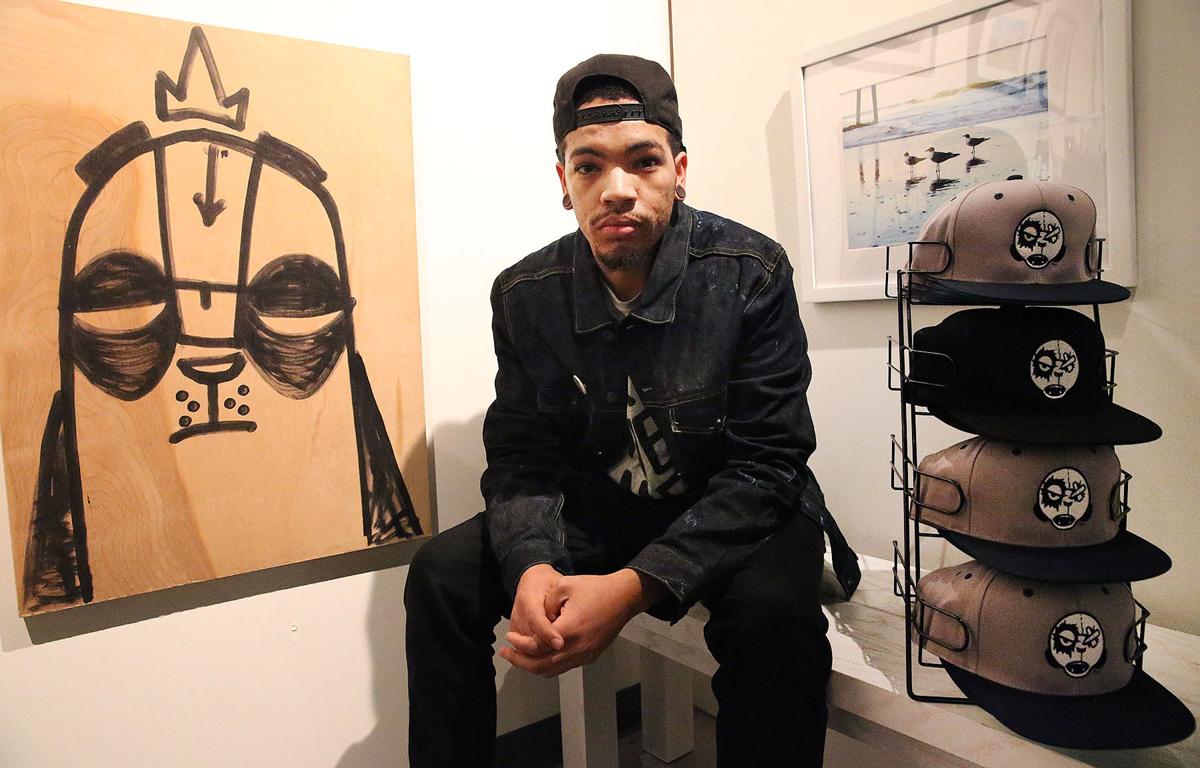 Multimedia artist Drew Dennis, of Pleasantville, believes people should pursue careers in whatever inspires them. For him, that means following a calling for the visual arts while living in a county dominated by casinos.

Dennis, a 2008 Pleasantville High School graduate, is the co-owner of the Art Before Crime clothing line. He also does photography for Willie Esco, the creative director for Coogi, a fashion label headquartered in New York and known for its colorful knitwear. This is in addition to his full-time job working at Tri-County Building Supplies in Pleasantville.

“I work myself to the bone. I stretch myself very thin,” said Dennis. “It’s going to pay off. It is paying off. It’s something I loved since childhood.”

Southern New Jersey artists have an extra hurdle to overcome in an area more known for summer tourism than for supporting the visual arts.

They say it is possible to make it here, but it might require working a full- or part-time job to pay bills and cultivating relationships with wealthy people or corporations. It certainly means being as much a business person as an artist.

Dennis sells his photographic prints and T-shirts in Stockton University’s Noyes Arts Garage in Atlantic City. Before the Arts Garage opened, Dennis would go to people’s homes to sell his artwork or sell it through his website, www.sec-ond.com.

The principle that guides Dennis’ photography is the desire to show people how beautiful Atlantic City is, because most people see it in a negative light, he said.

One of the T-shirts Dennis is selling has the expression “Art Saved Me” on it.

“I literally wrote that because that’s how I felt at that moment,” said Dennis. “I lost a lot of friends in the past few years to them doing something extremely negative like selling drugs, getting caught, being shot, things of that nature, and I just feel like my art saved me.”

Art Before Crime, the clothing line and art collective based out of Pleasantville, puts graf…

Steve Kuzma, a full-time artist, illustrator and educator with more than 30 years of professional experience, has been in southern New Jersey for the past 20 years, but he lived in New York City for a decade before that. His clients have included the Olympics, World Cup Soccer, the New York Times, Time Magazine, ABC, CBS and NBC.

Kuzma, who has studio space at the Arts Garage, in Somers Point and in Millville, said one person can make a great difference in bettering the life of an artist. Kuzma, 55, credits former AtlantiCare president and CEO Donald Parker for six years worth of work on various projects.

“He’s a great guy,” Kuzma said. “I’m working with a CEO who takes care of details. He’s a wise catalyst in bringing out the best in people. He’s an example of how to have vision and follow through with it.”

Kuzma, of Ventnor Heights, knows first-hand the challenges of being a visual artist in southern New Jersey. He said the Arts Garage is a beautiful idea and an inspiring space. He has had space in the garage for two years. At one point, a humidifier pump sprayed water on his work and damaged thousands of dollars worth of art.

Kuzma also lost five years worth of work in 2012 when it was damaged during Hurricane Sandy in Ocean City.

But he said that bad fortune has been offset by his being awarded a Pollock-Krasner Foundation grant in 2013. He designed and created all the artwork at Enlightened Solutions, a holistic substance abuse treatment center in Galloway Township for Jennifer Hansen, one of the three founders, and is doing work for the Carrier Clinic in Belle Mead, Somerset County.

“For visual artists to make a difference, they need support directly,” said Kuzma.

Our view: Let's find a new, and better, location for the Noyes Museum

For anyone who has spent time at the Noyes Museum over the years, news that the museum build…

Jan Bendyna, of Cape May, lived in New York City before moving to Egg Harbor Township about 20 years ago and Cape May six months ago. Bendyna is currently preparing for a month-long exhibit of her work in April at the Mad Batter Restaurant at the Carroll Villa Hotel in Cape May.

While Bendyna lived in New York, she worked in graphic design and marketing, and she still makes use of those skills. She said living in Cape May is inspirational because of the beauty of the surroundings, and it is pretty peaceful, which aids in creativity.

“I think it might be a hindrance in some ways because it’s hard to get terribly edgy with your work in this area because people have their certain ideas of what’s acceptable as far as art is concerned and what they will buy,” Bendyna said. “Some of the things that I would paint just certainly would not sell here, except in a very limited market.”

The full-time painter said she has been helped because her twin sister, Judy Leone, and her husband, Jose Chora, who are both artists, own the Chora Leone Gallery in Somers Point.

“We’re almost like a grapevine of what’s going on where and who wants what,” Bendyna said. “Since all three of us have traveled a lot, and I lived in New York City, we have an open mind as far as new ideas and things to do that might not have already been explored here.”

All three artists have different ideas of what could be done to make the southern New Jersey area more hospitable for visually creative types.

Visitors and residents could make more of effort to come to art shows and to purchase artists’ work, Dennis said.

“Arts garage is a great place, somewhere where you can display your work,” said Dennis, who will fly this month down to Colombia for a photography job. “It’s the beginning of something great. It needs a little more support.”

Atlantic City needs a place where artists can live, work and sell all under one roof, Kuzma said. That would be to make it more feasible for artists to stay in the city.

“This is what could help bring the city to some kind of community,” said Kuzma, who also proposed building an arts center with multiple artistic disciplines under one roof, similar to how the Lake Placid Center for the Arts in New York.

Bendyna would like to see Atlantic City start working toward hosting a large-scale juried art show or competition, similar to Art Basel in Florida.

“It not only helps artists. It brings so much money to a community,” Bendyna said. “I’m talking about putting together some serious prize money where artists come in from across the country. That’s when you fill up every hotel. It becomes a yearly event. Every year, it gets bigger and bigger.”

Last week, Mike Tribulas drove through the inlet section of Atlantic City, where he grew up, a place full of memories.

For anyone who has spent time at the Noyes Museum over the years, news that the museum building on Lily Lake Road in Galloway Township is clos…