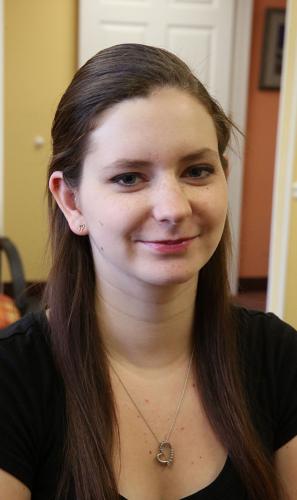 After surgery picture -- Sierra Tumolo of Northfield has her post-operation examination by Plastic Surgeon Dr. Steven Davis at his Northfield office, Monday July 13 2015. (The Press of Atlantic City / Ben Fogletto) 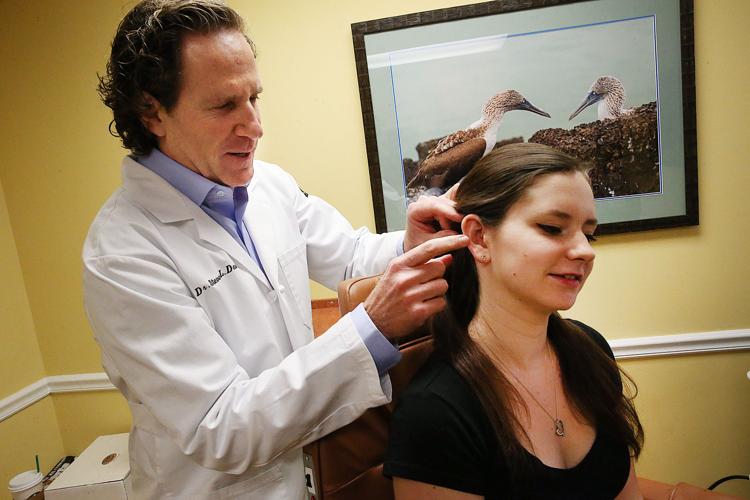 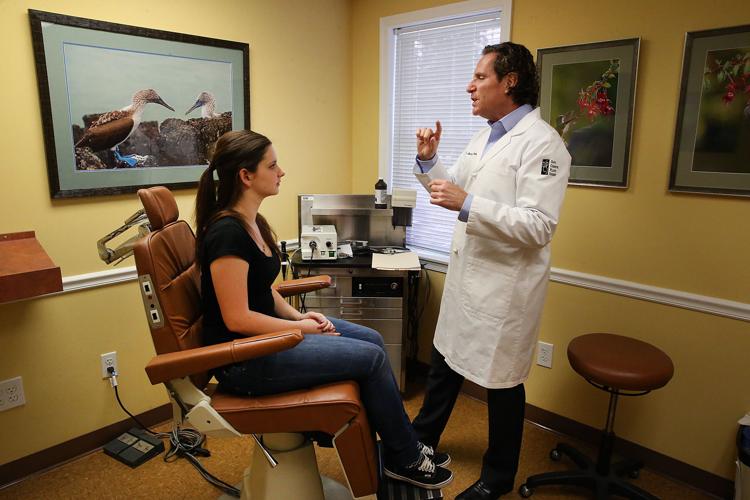 Sierra Tumolo put her hair up for her senior prom at Mainland Regional High School. That’s easy enough for just about everyone with long hair like hers, but for 18-year-old Tumolo, of Northfield, having her ears exposed was a new feeling.

The teenager has been self-conscious about her ears, which “stuck out like crazy,” a trait she noticed even as a young girl in ballet classes where high buns are en vogue. Putting her hair up, even in hot summer months, wasn’t an option, she said. She needed the curtains of her brown hair to hide her ears.

“It’s been bothering me for the last couple years pretty badly. I’d look in the mirror and say, ‘Wow, I look bad’,” said Tumolo, who graduated from Mainland Regional High School

After talking at length with her mother, Tumolo went to see Steven Davis, a plastic surgeon with practices in Northfield, Cherry Hill and Philadelphia. She went under the knife in a procedure called an otoplasty, one of the more common cosmetic surgeries done for people in her age group.

Tumolo used the surgery as self-empowerment: She said she was never really bullied by her peers about her ears because she was always hiding them.

“I felt great about it, I don’t think I did it at the wrong age or anything,” said Tumolo, about two months after her late-spring surgery.

Teenagers and young adults are in an interesting group as plastic surgery candidates. At a time when their bodies and minds are still maturing, they face pressures from peers and the media that may urge them to look a certain way. Just thumbing through a magazine can lead to coveting celebrities’ and models’ physical assets. I want Taylor Swift’s legs; I want Brad Pitt’s pecs; Look at Angelina Jolie’s cheekbones; Kylie Jenner’s lips are amazing.

In the popular imagination, plastic surgery is still thought of as a way for Beverly Hills moms to look more like their daughters. It can, of course, be a saving grace for someone disfigured at birth or by accident. But under the right circumstances, experts say cosmetic surgery also can be a safe way for teenagers or young adults to gain increased confidence and a more positive self-image.

There were just more than 224,000 cosmetic procedures done in 2014 nationwide for teens between the ages of 13 and 19. That’s a 2 percent increase from the year before, according to the America Society of Plastic Surgeons.

In his 30 years as a practicing cosmetic surgeon, Davis said he’s seen an increase in the number of younger people asking him for help.

With all surgeries, Davis said he has at least two initial consultations before setting a date for the procedure. For anyone under 18, parents are involved in those meetings.

Determining whether a teenager should look into plastic surgery is a balancing act, Davis said. When looking at a younger patient — he puts young patients in the age group of young teenagers to people in their early 20s, whose bodies may also still be growing — Davis said he’s all about measuring the risk-benefit ratio.

A good risk-benefit ratio would be fixing something with minimal scarring, recovery time or risk of anesthesia, and also knowing it would make a client feel better about themselves. Aspects that would play into a bad risk-benefit ratio could be a bad reason for a procedure (i.e. wanting to look like a celebrity) or if the parent is pushing for the procedure more than the teenager.

“There may be something about you that no one really focuses on, but when you look in the mirror, if you could get that fixed, that would change the way you approach this,” he said. “With Sierra, she was a perfect candidate. We talked about what the procedure would be. In this case, the risk benefit ratio was minimal.”

He added that he encourages some clients who are considering procedures with outcomes that can be derived in a different way — weight loss issues, for example — to wait a bit before surgery.

Debra Gill, a clinical psychologist with a practice in Livingston and part of the New Jersey Psychological Association, specializes in weight, eating disorders and body image. When it comes to plastic surgery, having a particular body part that a person wants to improve may not lead to an overall negative body image.

It’s not a new thing to put the body under some kind of stress to make it look a certain way, she said. Take Chinese foot binding, tall high heels, or over-exercising. Even Kylie Jenner’s full lips led to an untraditional method of lip plumping: Viral videos popped up this summer of young people sucking on a glass to temporarily engorge their lips. Media reports said some people developed bruising and scarring around the lips because of the “Kylie Jenner Lip Challenge.”

“If I were to do an evaluation for plastic surgery, I would want to rule out that this is not just one of many potential things about themselves that they were disliking,” she said. “If they were depressed, it may not be that having the surgery right then would change the way they felt.”

She said four of her clients — a pool of people she says is 50 percent teens and young adults, and 50 percent older adults — have had some type of plastic surgery. They all had positive experiences and liked the way the procedure turned out.

Many people have body-image issues, Gill said, and surgery might be able to help some of that. But emotional health plays a large part in feeling good about oneself.

“There’s a specific treatment with everyone, but in general making yourself talk more kindly and compassionately about yourself helps,” she said. “When people are feeling good about themselves and how they’re taking care of themselves, they generally have a better body image.”

Carolyn Hax: Uncle crossed the line in comment about niece

Question: My 13-year-old niece is tiny and has a big nose. We live in a community where a lot of teenage girls have cosmetic surgery at 16.

Tact softens blow of no invititation

Dear Abby: I am planning a wedding this summer. My fiance and I are paying for it ourselves, so we are trying to keep it within a budget. I'm …

WHO IS SHE: Comedian Kathy Griffin became known for her role as Vickie Groener alongside Brooke Shields on NBC’s “Suddenly Susan” in the late …

NEW YORK - Donna Douglas, who played the buxom tomboy Elly May Clampett on the hit 1960s sitcom "The Beverly Hillbillies," has died.

Business: The Plastic Surgery Center of Cape May Court House

The Cumberland County College baseball team left campus together in a bus at 2 a.m. Thursday for the biggest road trip in school history.

Dear Abby: As a child, I was sexually, physically and mentally abused. As an adult, I suffered several miscarriages and two of my children die…

A total mastectomy is the surgical removal of the entire breast. It is an option for those who have been diagnosed with breast cancer and an o…

Would you let your teenage child get plastic surgery?

After surgery picture -- Sierra Tumolo of Northfield has her post-operation examination by Plastic Surgeon Dr. Steven Davis at his Northfield office, Monday July 13 2015. (The Press of Atlantic City / Ben Fogletto)