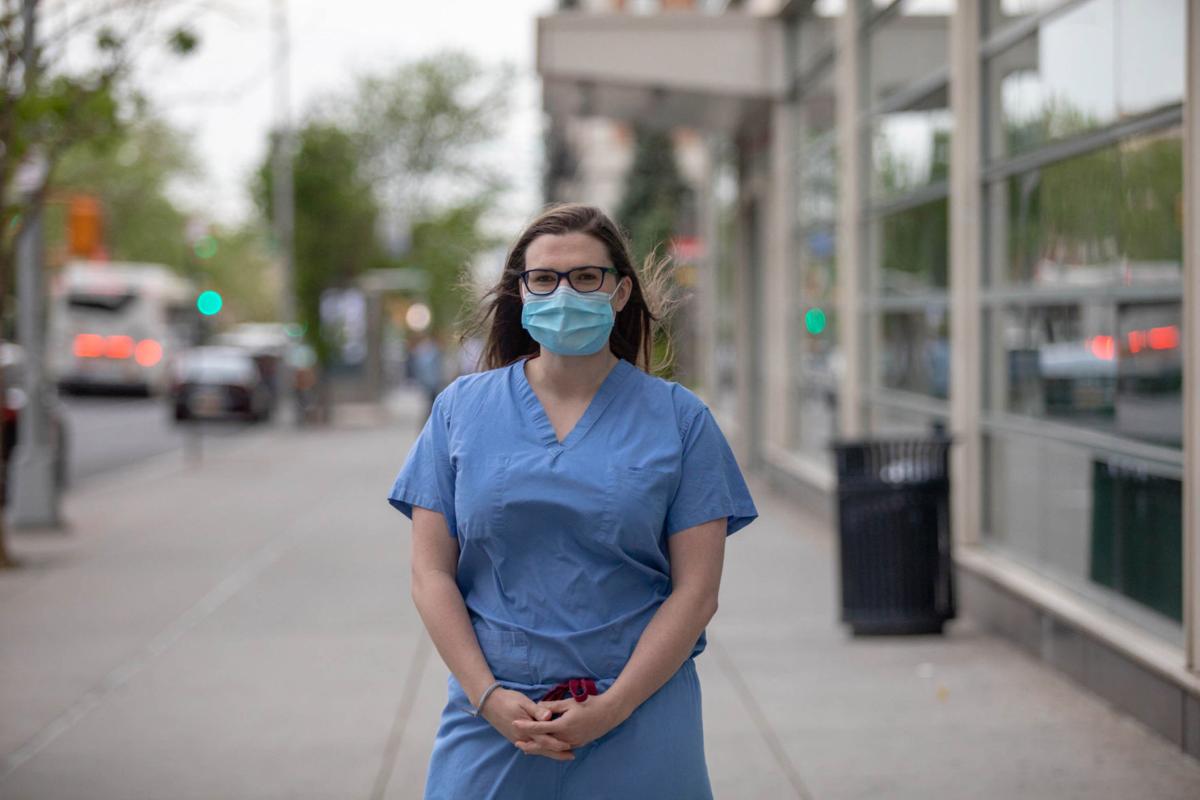 Dr. Lauren Schleimer, a first-year resident at NewYork-Presbyterian Hospital, exhibited symptoms of the coronavirus after working in a COVID-only intensive care unit. She was instructed to stay home for seven days. She was never tested. Schleimer returned to the ICU symptom-free to treat patients fighting the same virus she suspects she had. 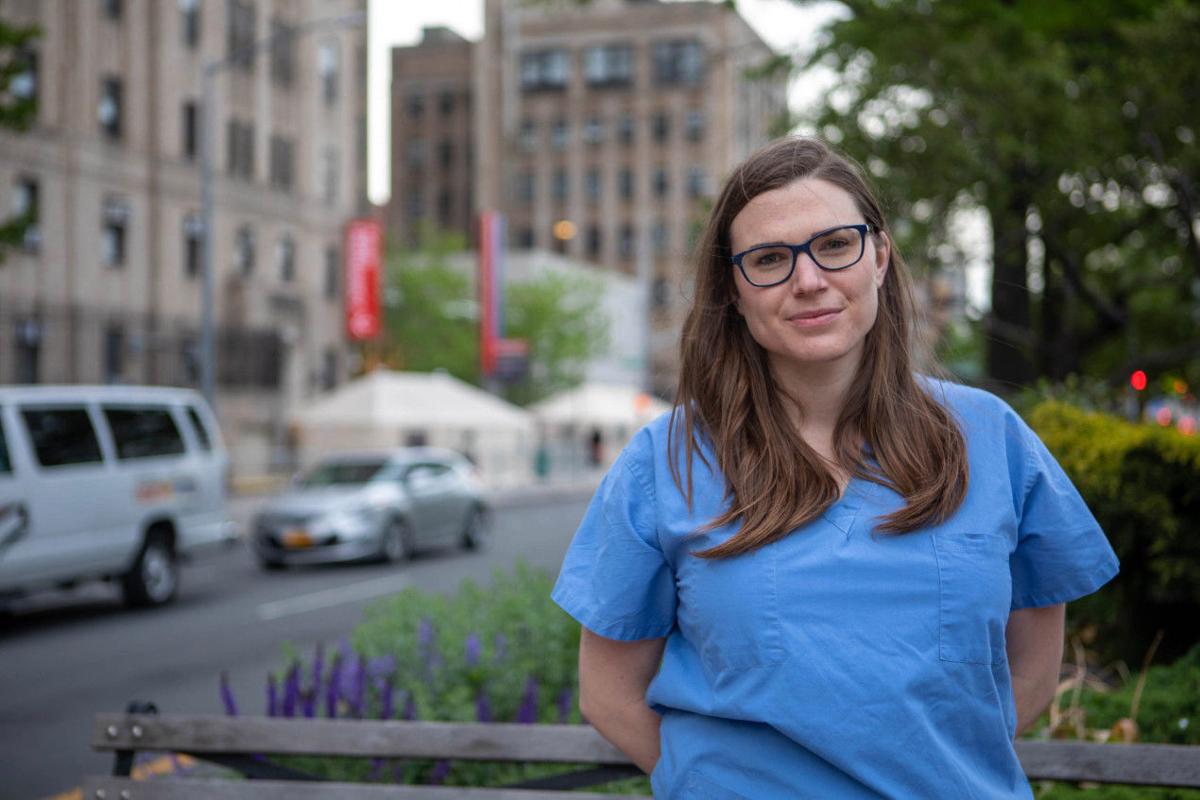 Dr. Lauren Schleimer, a first-year resident at NewYork-Presbyterian Hospital, was never tested for COVID-19. ‘But I definitely had some symptoms, and I was just trying to do the right thing,’ she said of her seven-day quarantine.

The first call in early April was from the testing center, informing the nurse she was positive for COVID-19 and should quarantine for two weeks.

The second call, less than 20 minutes later, was from her employer, as the hospital informed her she could return to her job within two days.

“I slept 20 hours a day,” said the nurse, who works at a hospital in New Jersey’s Hackensack Meridian Health system and spoke on the condition of anonymity because she is fearful of retaliation by her employer.

Though she didn’t have a fever, “I was throwing up. I was coughing. I had all the G.I. symptoms you can get,” referring to gastrointestinal COVID-19 symptoms such as diarrhea and nausea.

“You’re telling me, because I don’t have a fever, that you think it’s safe for me to go take care of patients?” the nurse said. “And they told me yes.”

Guidance from public health experts has evolved as they have learned more about the coronavirus, but one message has remained consistent: If you feel sick, stay home.

Yet hospitals, clinics and other health care facilities have flouted that simple guidance, pressuring workers who contract COVID-19 to return to work sooner than public health standards suggest it’s safe for them, their colleagues or their patients.

Some employers have failed to provide adequate paid leave, if any at all, so employees felt they had to return to work — even with coughs and possibly infectious — rather than forfeit the paycheck they need to feed their families.

Unprepared for the pandemic, many hospitals found themselves short-staffed, struggling to find enough caregivers to treat the onslaught of sick patients. That desperate need dovetailed with a deeply entrenched culture in medicine of “presenteeism.”

Front-line health care workers, in particular, follow a brutal ethos of being tough enough to work even when ill under the notion that other “people are sicker,” said Andra Blomkalns, who chairs the emergency medicine department at Stanford University.

In a survey of nearly 1,200 health workers who are members of Health Professionals and Allied Employees Union, roughly a third of those who said they had gotten sick responded that they had to return to work while symptomatic.

That pressure not only stresses hospital employees as they are forced to choose between their paychecks and their health or that of their families. The consequences are starker still: An investigation by KHN and The Guardian has identified at least 875 front-line health workers who have died of COVID-19, likely exposed to the virus at work during the pandemic.

But the dilemma also strains health workers’ sense of professional responsibility, knowing they may become vectors spreading infectious diseases to the patients they’re meant to heal.

“What we learned in this pandemic was employees felt disposable,” said Debbie White, a registered nurse and president of the Health Professionals and Allied Employees Union. “Employers didn’t protect them, and they felt like a commodity.”

Indeed, the pressure likely has been even worse than usual during the pandemic because hospitals have lacked backup staffing to deal with high rates of absenteeism caused by a highly infectious and serious virus. Hospitals do not staff for pandemics because in normal times “the cost of maintaining the personnel, the equipment, for something that may never happen” was hard to justify against more certain needs, said Dr. Marsha Rappley, who recently retired as chief executive of the Virginia Commonwealth University Health System in Richmond.

That has left many hospitals scrambling to find skilled staff to tend to waves of patients with COVID-19.

The nurse from Hackensack Meridian, the largest hospital chain in New Jersey, told the hospital’s occupational health and safety office that she could not return to work, citing a doctor’s instructions to isolate herself. No threat to fire her was made, she said.

But in daily calls from work, she was reminded her colleagues were short-staffed and “suffering.”

She also discovered her employer had revoked most of the paid time off she believed she had accumulated.

White said Hackensack Meridian had conducted what it described as a “payroll adjustment” in March and taken leave from many of its employees without explaining its calculations.

A statement provided by a Hackensack Meridian spokesperson, Mary Jo Layton, said the system’s occupational health office “has followed the CDC recommendations as it relates to the evaluation, testing and clearance of team members following infection with COVID-19.”

Hackensack Meridian adjusted some employees’ leave to correct a technical issue that prevented leave from being counted as it was taken, it said, adding workers were provided “an individual PTO reconciliation statement.”

“No team members were shorted any PTO that they rightfully earned,” Hackensack Meridian’s statement said.

Federal officials acknowledge that staffing shortages may require sick health care workers to return to work before they recover from COVID-19. The Centers for Disease Control and Prevention even has strategies for it.

The CDC website lists mitigation options for short-staffed facilities, some of which have been implemented widely, such as canceling elective procedures and offering housing to workers who live with high-risk individuals.

“As a last resort,” the website says, health care workers confirmed to have COVID-19 may provide care to patients who do not have the virus.

Like soldiers on the battlefield, Rappley said, front-line workers have been absorbing the consequences of that lack of preparedness on an institutional and societal level.

“This will leave scars for many generations to come,” she said.

Shenetta White-Ballard carried an oxygen canister in a backpack at work. A nurse at Legacy Nursing and Rehabilitation of Port Allen in Louisiana, she needed the help to breathe after battling a serious respiratory infection two years earlier.

When COVID-19 began to spread, she showed up for work. Her husband, Eddie Ballard, said his paycheck from Walmart was not enough to support their family.

“She kept bringing up, she gotta pay the bills,” he said.

Legacy Nursing and Rehabilitation did not respond to requests for comment.

Ballard said his wife’s employer offered no support for him and their 14-year-old son after her sudden death. “Only thing they said was, ‘Come pick up her last check,’” he said.

Liz Stokes, director of the American Nurses Association’s Center for Ethics and Human Rights, said immunocompromised workers, in particular, have faced difficult decisions during the pandemic _ sometimes made more difficult by pressure from employers.

Stokes recounted the experience of a surgical nurse in Washington with Crohn’s disease who took a temporary leave at her doctor’s recommendation but was pressured by her bosses and co-workers to return.

Residents, or doctors in training, are among the most vulnerable, as they work on inflexible, tightly packed schedules often assisting in the front-line care of dozens of patients each day.

Not long after one of New York City’s first confirmed COVID-19 patients was admitted to NewYork-Presbyterian Hospital, Lauren Schleimer, a first-year surgical resident, reported she had developed a sore throat and a cough. Because she had not been exposed to that patient, she was told she could keep working and to wear a mask if she was coughing.

Her symptoms subsided. But a couple of weeks later, as cases surged and ventilators grew scarce, she was working in a COVID-19-only intensive care unit when her symptoms returned, worse than before.

The hospital instructed her to stay home for seven days, as health officials were recommending at the time. She was never tested.

A NewYork-Presbyterian Hospital spokesperson said of its front-line workers: “We have been constantly working to give them the support and resources they need to fight for every life while protecting their own health and safety, in accordance with New York State Department of Health and CDC guidelines.”

Schleimer returned to the ICU symptom-free at the end of her quarantine, caring for patients fighting the same virus she suspects she had. While she never felt that sick, she worried she could infect someone else _ an immunocompromised nurse, a doctor whose age put him at risk, a colleague with a new baby at home.

“This was not the kind of thing I would stay home for,” Schleimer said. “But I definitely had some symptoms, and I was just trying to do the right thing.”

Looking for food distributions in South Jersey? Here's a list.

The Coalition for a Safe Community and the Pleasantville School District are holding a food distribution and a book bag giveaway starting 10 a.m. Wednesday at the Pleasantville Bus Station, West Jersey Avenue.

Dealing with a different beast: the Delta variant

After declining steeply for six months (thanks to vaccines), coronavirus cases are again on the rise across the nation, as a result of the Del…

Searching for a K-cup coffee maker in the right color: Franny The Shopaholic

Dear Franny The Shopaholic: Please find me the best deal on a Keurig K-Cup coffee maker. I don’t need the biggest or the smallest, just someth…

Measuring blood pressure is an important part of any physical exam.

Dr. Lauren Schleimer, a first-year resident at NewYork-Presbyterian Hospital, exhibited symptoms of the coronavirus after working in a COVID-only intensive care unit. She was instructed to stay home for seven days. She was never tested. Schleimer returned to the ICU symptom-free to treat patients fighting the same virus she suspects she had.

Dr. Lauren Schleimer, a first-year resident at NewYork-Presbyterian Hospital, was never tested for COVID-19. ‘But I definitely had some symptoms, and I was just trying to do the right thing,’ she said of her seven-day quarantine.