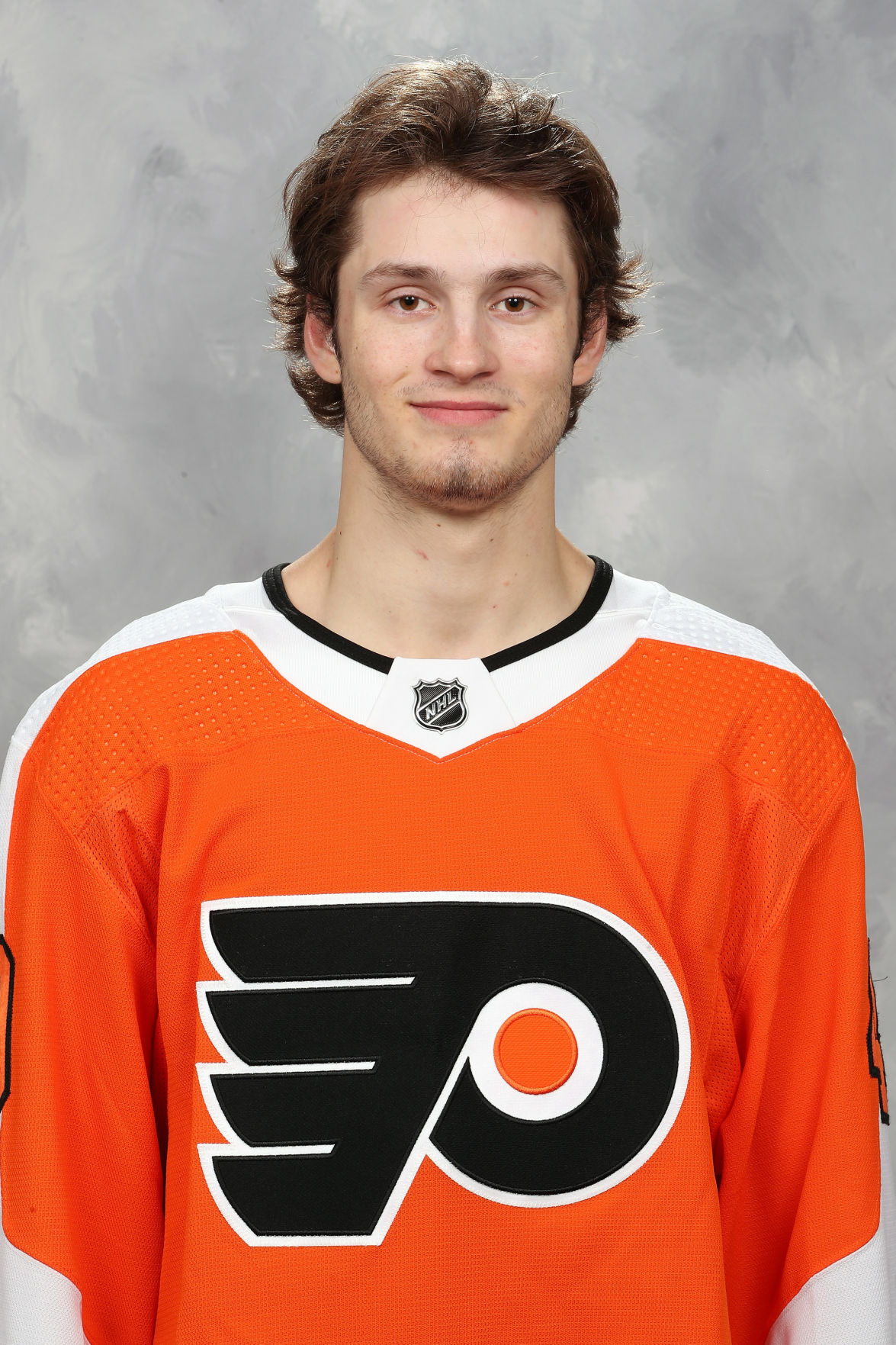 VOORHEES, NJ - SEPTEMBER 12: Joel Farabee of the Philadelphia Flyers poses for his official headshot for the 2019-2020 season on September 12, 2019 at the Virtua Flyers Skate Zone in Voorhees, New Jersey. (Photo by Len Redkoles/NHLI via Getty Images) *** Local Caption *** Joel Farabee

While Joel Farabee was scoring one goal, setting up three others and making life miserable for the Pittsburgh Penguins on the opening night of the NHL season, his college coach didn’t have a chance to catch a minute of this marvelous performance from the best player of Boston University’s recent past.

Albie O’Connell had his present and future to worry about instead.

Sure, the Philadelphia Flyers’ 6-3 victory Wednesday at the Wells Fargo Center was televised nationally on the NBC Sports Network, but O’Connell never saw a second of the game. He had a succession of meetings with his current players at BU, then a Zoom call with a recruit.

“But I’m not totally surprised, to be honest,” he said in a phone interview. “Joel has terrific hockey sense and unbelievable anticipation. He can score. He can make a play, and he’s got some toughness to him. He’s going to keep getting better and better.”

O’Connell couldn’t track the progress and the career night for his former player, but someone else in his household could. O’Connell’s wife, Kristen, is a Cardinal O’Hara alumna — “Delco’s finest,” Albie said — and while her husband took care of his team and program, she had her eye on Farabee and the Flyers-Pens game. “He’s lighting it up,” she said, and she was right. Farabee was responsible for the secondary assist but the primary play on the Flyers’ first goal: a backward, backhand, bank pass off the boards to tee up an Erik Gustafsson slap shot that James van Riemsdyk tipped past Penguins goaltender Tristan Jarry. Then, late in the second period, he broke a 2-2 tie with another nifty move, stationing himself at the side of the Penguins’ crease, taking a pass from Kevin Hayes, and sliding the puck along the ice, past Jarry, to the net’s far side.

For a player who doesn’t turn 21 until next month, they were a pair of savvy, skillful plays, and they were signs of the luxury that the Flyers have afforded themselves, to cultivate depth on their forward lines by keeping younger players on their roster. Their former general manager, Ron Hextall, as a general rule didn’t want to risk pushing a player to the NHL too fast, and there was merit to his thinking. But now the Flyers have Farabee, Travis Konecny (23), Nolan Patrick (22), and Morgan Frost (21) available to contribute and capable of doing so.

“I feel like we have four really good lines,” Farabee said. “Overall, our team play was really good, and we have a lot to build off from that.”

In his only season at BU, Farabee had 17 goals and 36 points, both team highs, in 37 games, all from a rail-thin, 6-foot-tall freshman who was just 17 years old at the start of that season. His performance and production were enough to persuade the Flyers to make him their first pick, and the 14th overall, in the 2018 draft, but O’Connell could see how much better Farabee would and could be once he added body mass and muscle through time and training.

“For us at the start of the year, he was very good in pockets,” O’Connell said. “He had a lot of room for growth, and in our last 15 games, he was our best player and one of the better players in our league. He had a great mind and great tools, and the only thing holding him back was physical strength. He needed some time to develop, but he’s awesome. He’s a gamer, and we loved having him.”

He’s now 185 pounds, not particularly imposing, but a fine fit Wednesday night on a line with a similarly sized wing in Claude Giroux and a bigger, more rugged center in Hayes. They had seven points among the three of them.

“I feel a lot more comfortable this year,” said Farabee, who had nine goals in 52 regular-season games and three in 12 postseason games as a rookie. “I definitely put in a lot of time in the offseason, just trying to build as much strength as I can. Obviously, the camp was short, but I feel really good. It was a weird offseason, and my mindset was just to stay ready, working out back home, skating, and kind of ramped it up before I came back.”

Of all the factors that contribute to a team’s contending for a championship, maybe the most underrated is one of the most intangible and difficult to predict: the maturation and improvement of players already on the roster. That’s the opportunity the Flyers have this season, with the potential blossoming of those draft picks from years past. That’s the opportunity for Farabee, and he seized it Wednesday night. If he keeps it up, there will be plenty of more nights like it to come. It just so happened that his friend and former coach missed this one, understandably, for a very important Zoom call.

“Hopefully,” O’Connell said, “with the next Joel Farabee.”

MAYS LANDING — Joshua Smith is getting plenty of mileage out of his inflatable Baby Trump costume.

President Donald Trump conceded to Joe Biden and condemned violent protests in a video. Here's a sampling of how thousands of Twitter users are reacting.

Plans for beachfront restaurant to be heard in Avalon

AVALON — A plan for a new, expanded restaurant at the site of one of the two existing businesses on Cape May County’s smallest boardwalk is ge…

For Leonard Guthrie Jr., Wednesday afternoon in Washington, D.C., was meant to be about restoration and revival.

Deauville Inn renovates and reinvents while retaining its old-school charm

To say the Deauville Inn is part of South Jersey’s history is an understatement. Debuting in 1881 by James P. Carothers, who came to America f…

VOORHEES, NJ - SEPTEMBER 12: Joel Farabee of the Philadelphia Flyers poses for his official headshot for the 2019-2020 season on September 12, 2019 at the Virtua Flyers Skate Zone in Voorhees, New Jersey. (Photo by Len Redkoles/NHLI via Getty Images) *** Local Caption *** Joel Farabee