The South Jersey Derecho: 5 years ago this week
0 Comments
Share this
{{featured_button_text}}
1 of 5 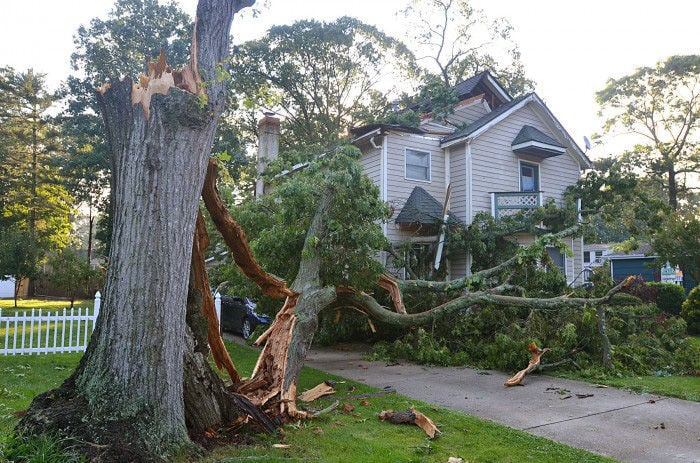 A tree crashed through the roof of the bedroom of Linda Porch on Mt. Vernon Avenue in Northfield. Saturday June 30 2012 (The Press of Atlantic City / Ben Fogletto) 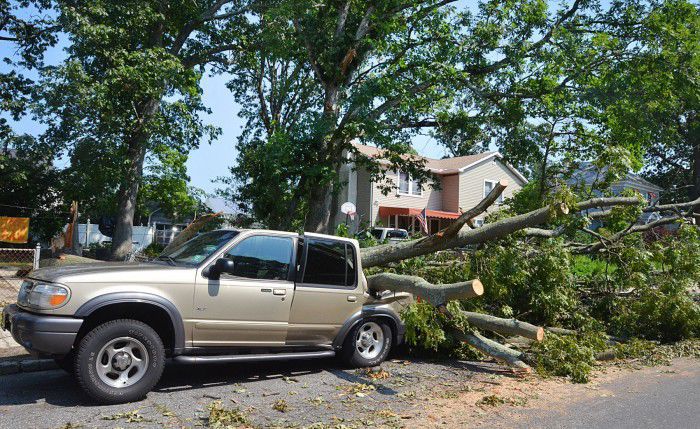 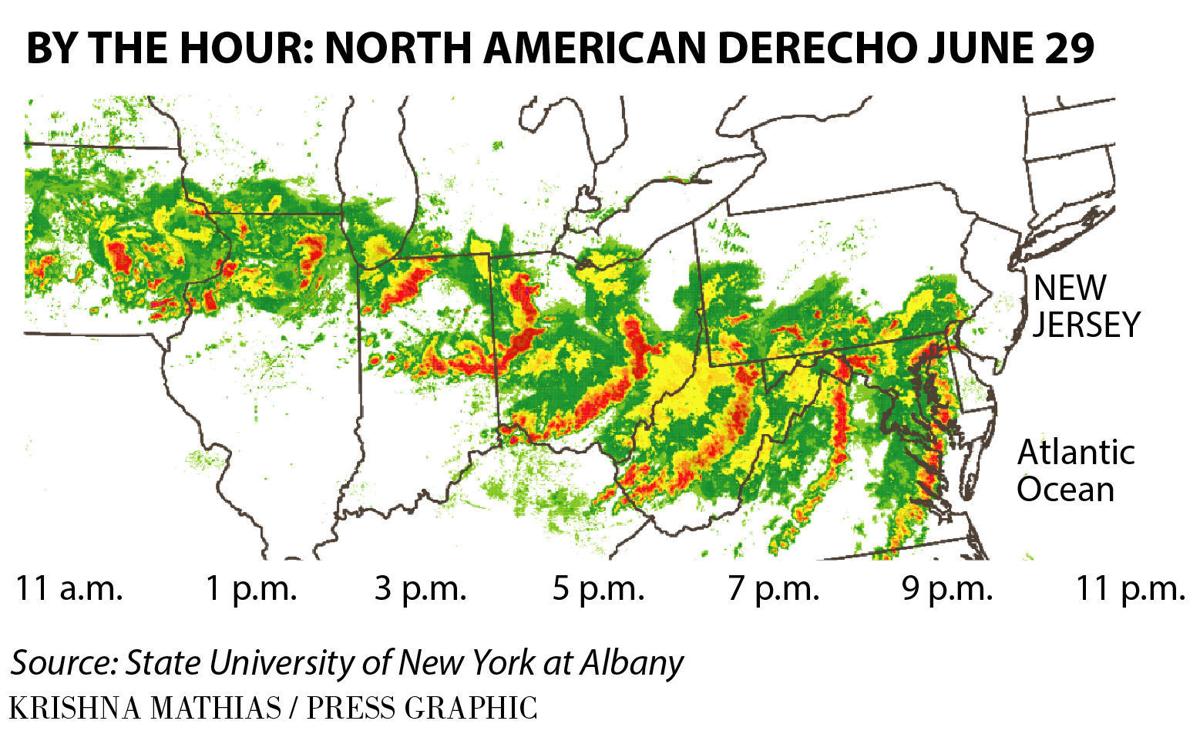 Time lapse of the June 29-30 derecho as it tracked across the country towards South Jersey, sweeping through our area around midnight and leaving an unforgettable mark on the South Jersey landscape. 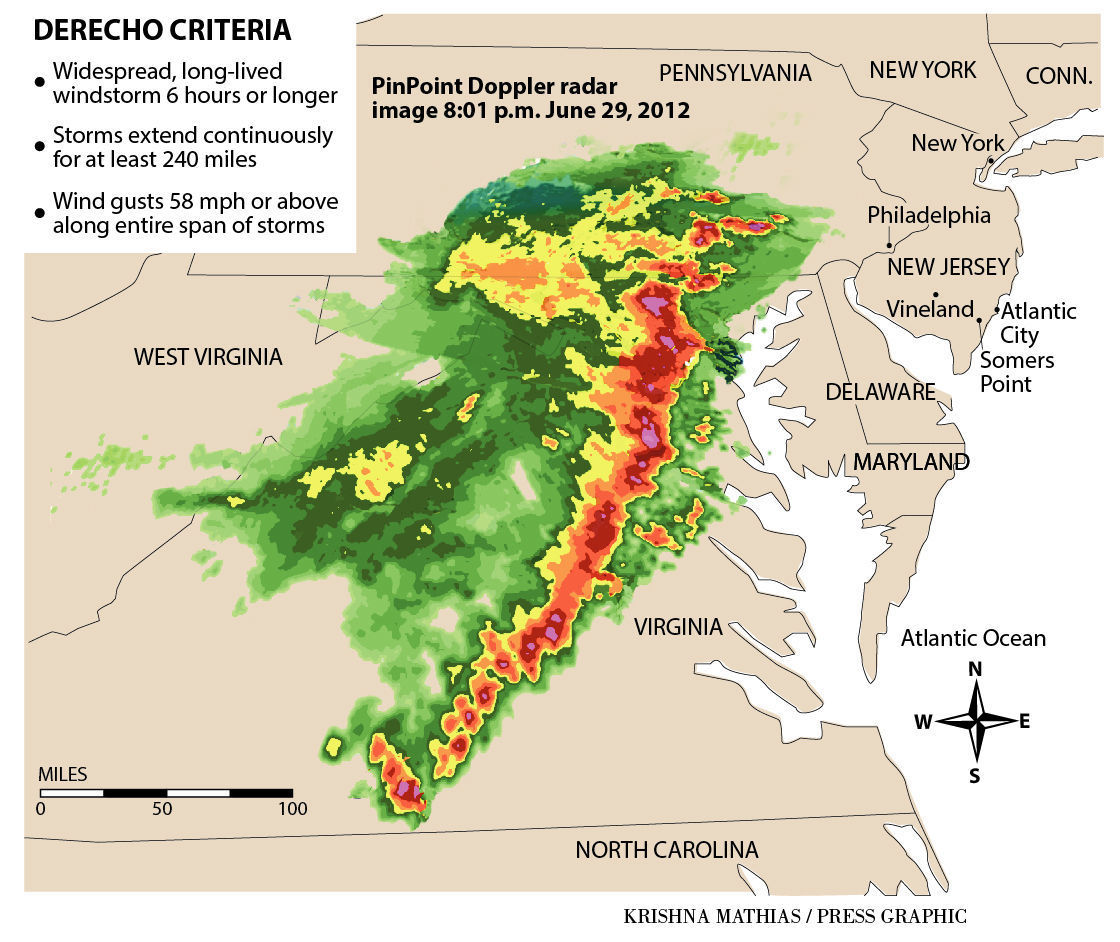 5 years ago, this derecho swept through South Jersey. It’s a word that’s been around for over a hundred years, but South Jersey only learned it that fateful night in late June 2012. 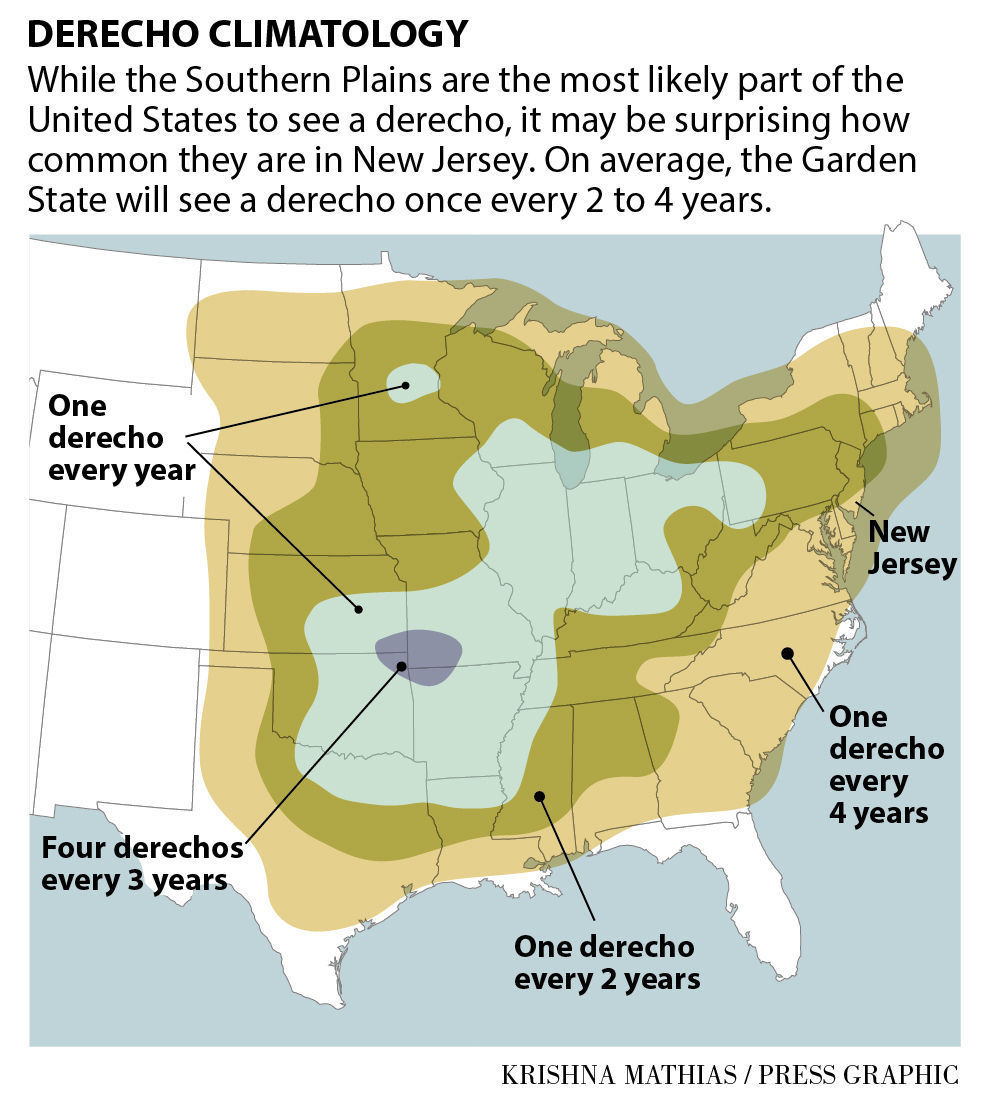 Derechos are more common than you may think, but one of that severity back on June 29-30, 2012 is very rare.  This map shows how often a derecho occurs on average across the country.

A meteorologist with the National Weather Service in Mount Holly, Cope began his radar shift at 1 p.m. June 29, 2012, when a small cluster of thunderstorms first developed around Chicago. Ten hours later, that cluster had exploded and was sweeping toward the East Coast. What happened next was something Cope and many in South Jersey will never forget.

By the following morning, South Jersey had learned a new word, a word that still sparks flashbacks to 30 minutes of destructive fury. This week marks the five-year anniversary of the great derecho of June 29-30, 2012, a storm that left an indelible mark on the landscape of South Jersey and the minds of its residents.

The numbers tell the tale: 206,000 customers were left without power, according to Atlantic City Electric, some for more than a week, a fact made worse by a blistering nine-day stretch of 90- to 100-degree heat and humidity that immediately followed the storm.

Thousands of trees were uprooted, although there’s no official count. Vince Jones, Atlantic County’s emergency management coordinator, was amazed by the amount of destruction and its spread. One of the hardest-hit areas, Atlantic County was under a state of emergency for weeks, Jones said. Thousands of lightning strikes lit up the sky that summer night, something Jones remembers well.

“The lightning flashed so intensely, and a strange blue-purplish color I’ve never seen before,” he recalled.

“I think 100 mph winds or greater were most likely experienced in the strongest downbursts of the derecho,” he said.

That’s a conclusion he reached from a walking tour of the damage at first light the following morning, from the streets of Absecon to the Mays Landing Golf and Country Club in Hamilton Township. A notebook and measuring tape in hand, Eberwine had conducted many storm surveys when he was with the National Weather Service, and knew just what to look for.

“What impressed me was not only the number and the diameter of the trees that were entirely uprooted or snapped, but the fact that they were so many live and healthy trees fallen — not just dead ones,” Eberwine explained.

He also knew what else to bring with him: a copy of the Enhanced Fujita scale, which is used to measure the intensity of tornadoes.

Eberwine immediately says there was no evidence of a tornado, but the scale helps meteorologists analyze storm damage, and place an estimated intensity on the peak winds.

And while many residents, even Jones, initially thought it was a tornado based on the ferocity of the storm and intensity of the damage, Cope says we would have fared much better if it had been a twister.

“A tornado only affects a narrow path, let’s say 50 to 100 yards wide and a mile long, while a derecho will affect hundreds of square miles,” Cope explained.

In Spanish, the word derecho means “straight.” That’s fitting, since the defining characteristic of a derecho is the intense straight-line winds it produces.

The word first was used for a destructive thunderstorm complex way back in 1887, Eberwine said. But the word has only recently entered mainstream meteorology, with the June 2012 derecho certainly magnifying the word’s use.

New Jersey does see a derecho every two to four years, Cope said, but few will ever rival the intensity of the June 2012 storm.

Along the shore, the defining storm of this generation is Hurricane Sandy, and the five-year anniversary of her landfall now just four months away.

But on the mainland across Atlantic, Cumberland and Salem counties, the derecho was the big one, the measuring stick for all future storms.

Warmth and humidity build into the weekend, but what about July 4th?

It’s the five-year anniversary of one of the greatest thunderstorm complexes to ever strike South Jersey. The great derecho left a path of wid…

It’s probably the most important forecast I devise all year. While I treat every forecast the same and always strive for accuracy, there is no…

All things considered, our four-day Fourth of July holiday weekend was a winner, at least weather wise.

A few Friday thunderstorms, then a nice weekend follows

How would you characterize the summer of 2017 so far? Warm? Hot?

A nice weekend on the way: Still warm but turning less humid

If you love swimming in the soup, then you certainly enjoyed the last few days of tropical humidity levels that set up shop over South Jersey.

Regular relief keeps us from going crazy from the heat

As someone who is not a fan of intense heat or oppressive humidity, this summer has been very cooperative so far.

The heat is on this week, but relief by the weekend

If I had to describe the summer of 2017 in a nutshell, at least so far, I would characterize it as warm but not hot, humid but not oppressive …

Even hotter on Thursday, then strong thunderstorms may follow on Friday

As you walk outside Thursday morning to pick up your newspaper, there’s a good chance the heat index will already be above 80 degrees. The act…

Strong thunderstorms possible Friday, then some relief for the weekend

It doesn’t get much more oppressive than Thursday, at least it hasn’t this summer: A steamy overnight low near 80 degrees, afternoon highs wel…

The weekend looks sunny, but will it bring relief from the high humidity?

Relief from summertime heat and humidity can come in many different varieties.

As heat and humidity build this week, just how hot will it get?

According to the calendar, we’re only 27 days into the summer of 2017, which officially runs from June 21 through Sept. 22.

Heat and humidity continue to build, but will any thunderstorms develop?

It’s almost automatic. When the heat and humidity rise, so, too, does the chance of thunderstorms.

Heat will peak Friday, then thunderstorm chances peak over the weekend

As is often the case in mid to late July, it’s hot, it’s humid, and there are scattered thunderstorms peppered throughout your forecast.

A cool and dry Wednesday, but rain and storms will return

Never bet against the northeast wind, apparently even in the middle of summer.

A tree crashed through the roof of the bedroom of Linda Porch on Mt. Vernon Avenue in Northfield. Saturday June 30 2012 (The Press of Atlantic City / Ben Fogletto)

Time lapse of the June 29-30 derecho as it tracked across the country towards South Jersey, sweeping through our area around midnight and leaving an unforgettable mark on the South Jersey landscape.

5 years ago, this derecho swept through South Jersey. It’s a word that’s been around for over a hundred years, but South Jersey only learned it that fateful night in late June 2012.

Derechos are more common than you may think, but one of that severity back on June 29-30, 2012 is very rare.  This map shows how often a derecho occurs on average across the country.