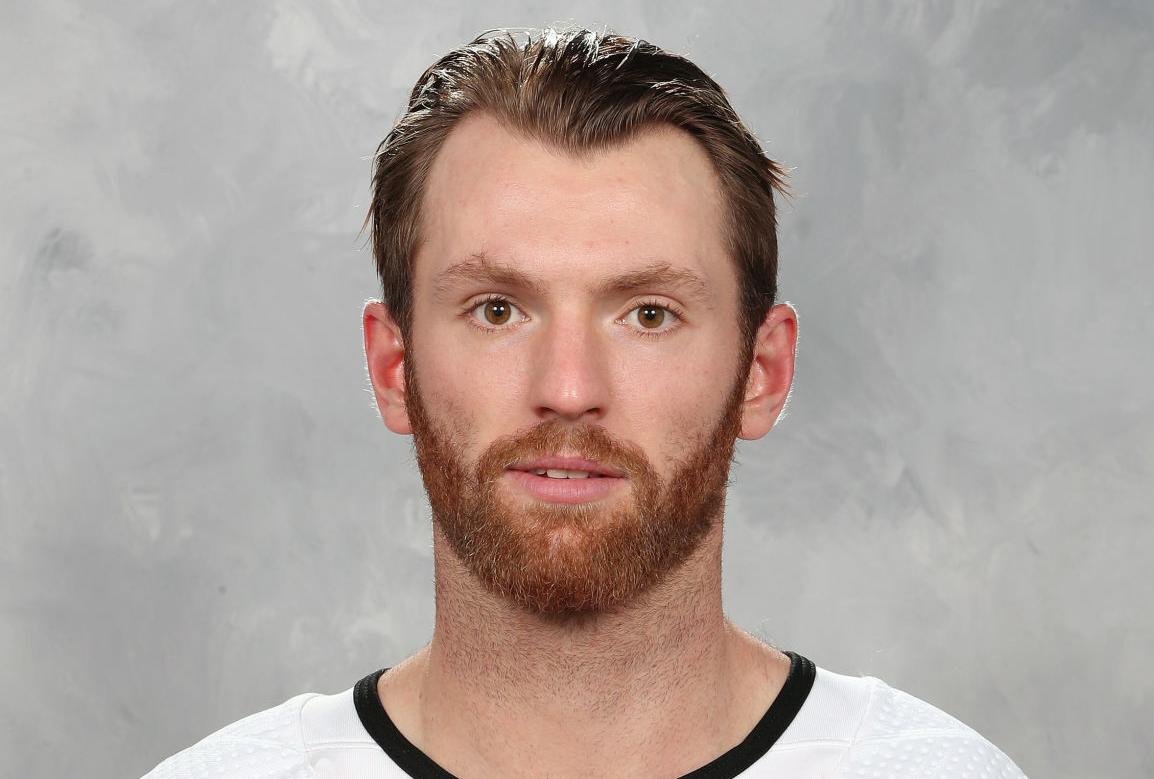 VOORHEES, NJ - SEPTEMBER 12: Sean Couturier of the Philadelphia Flyers poses for his official headshot for the 2019-2020 season on September 12, 2019 at the Virtua Flyers Skate Zone in Voorhees, New Jersey. (Photo by Len Redkoles/NHLI via Getty Images) *** Local Caption *** Sean Couturier 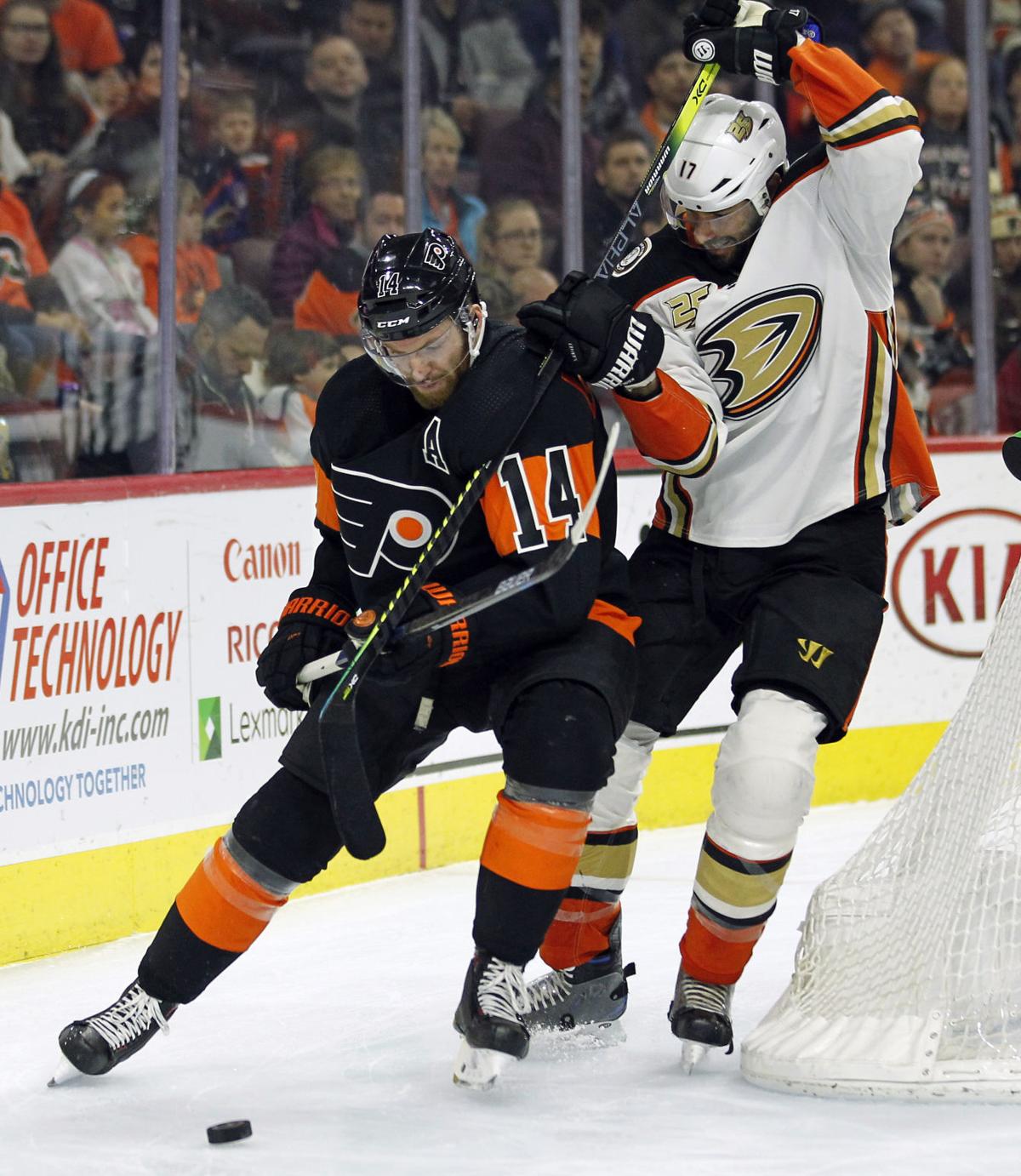 Sean Couturier, left, grabs the stick of the Ducks’ Ryan Kesler. Couturier scored his 23rd goal of the season and got his 24th and 25th assists. 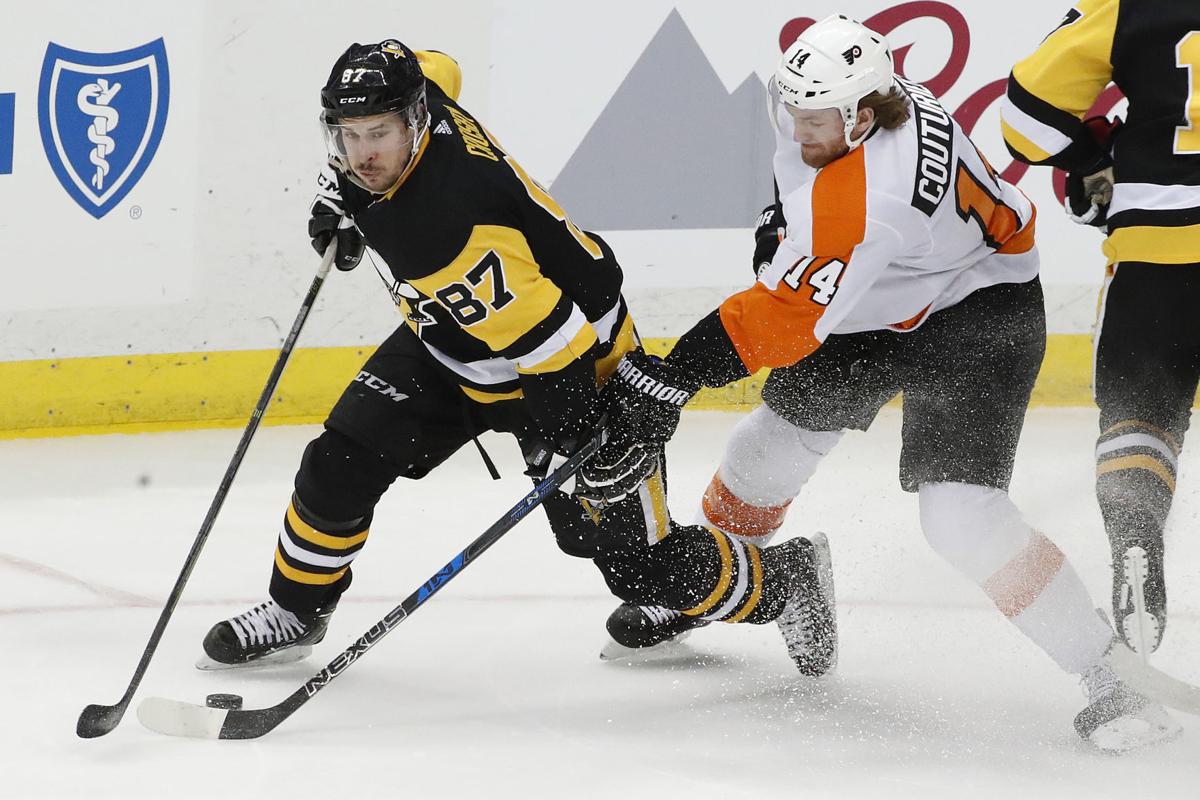 Whether Sean Couturier, right, and the Flyers can contain the Penguins’ Sidney Crosby will be a key to their playoffs series.

To climb to the next level, the Philadelphia Flyers must get off to a quick start and build off that momentum — and avoid what happened to them in a shortened season eight years ago.

That’s the assessment of veteran center Sean Couturier, and since he is the team’s reigning two-time MVP (Bobby Clarke Trophy winner) and one of its most insightful players, his opinion should carry a lot of clout.

“First of all, we need to get off to a good start, especially with a shortened season,” Couturier, who won his first Selke Trophy as the league’s best defensive forward last season, said in a Webex call with reporters Monday. “I had gone through it in the lockout year. We had a good team, but we just got off to a poor start and couldn’t make up ground in time to make the playoffs. Once you’re in the playoffs, anything can happen. That’s another part of our game where we’ll have to take another step as the year goes on.”

Couturier was referring to the 2012-13 lockout-delayed season, when the Flyers went 23-22-3 in a 48-game campaign and missed the playoffs after a 2-6 start. That was the season coach Peter Laviolette used goalie Ilya Bryzgalov in 22 straight games because he didn’t have a reliable backup.

In the pandemic-shortened 2021 season, teams will play 56-game schedules starting Jan. 13, when the Flyers host the Pittsburgh Penguins.

“If you come out of the gates with a poor start after 10, 15 games, there’s not many games to catch up,” said Couturier, who is preparing for his 10th NHL season.

Because the team made few offseason changes and has the same returning coaching staff, it should enable the condensed training camp — on-ice sessions will run Jan. 4-12 — to run smoother, Couturier said.

Winning a playoff round last season will also help, especially for the young players who saw what it takes to move on, Couturier said.

Couturier, 28, said playing home games at the Wells Fargo Center, instead of a “bubble” like they did in the postseason, will enable players to get on a “somewhat more normal schedule.”

It will also enable him to spend time with his infant daughter, Ella, who was born July 23, three days before the Flyers headed to their Eastern Conference hub city, Toronto.

“It’ll be a lot better for me and the guys with families,” he said.

Couturier said center Nolan Patrick, who missed last season with a migraine disorder, has been skating well and “looks good” in informal sessions in Voorhees. “We’re excited to have him back and he could be a big asset for us this year.”

Couturier called defenseman Erik Gustafsson a “great addition” but said the Flyers would miss Matt Niskanen’s leadership and veteran play. ... There was a positive side to the COVID-19 restrictions: Couturier said he was able to spend a lot of time at home with his family. “I took advantage of that,” he said, “and now I’m excited to get back here and get back to work.” ... Couturier said defenseman Phil Myers was around 180 pounds when he first met him five years ago. And now? “He’s a monster — 6-4, 6-5 and 220. He’s grown into becoming a man, and he skates well and has a good shot. I think with the year of experience, he’s just going to get better and better and he’s got all the tools to become a pretty special D-man in this league” down the road. ... Myers, who turns 24 on Jan. 25, is among the candidates to play on the top pairing with Ivan Provorov.

15 years after Flyers selected Claude Giroux, there is no forgetting his name

Flashback: Bob Clarke, then the Philadelphia Flyers’ general manager, goes to the podium and forgets the name of the player the franchise is g…

Bill Clement, a Renaissance man since being drafted by the Philadelphia Flyers in 1970, has traded in his microphone for a chainsaw.

For the Philadelphia Flyers, the medical news was not good Thursday as they announced that defenseman Phil Myers and center Morgan Frost will …

COLUMBUS, Ohio — Two days after Pierre-Luc Dubois was benched for lack of effort, the Columbus Blue Jackets on Saturday traded the unhappy sta…

It didn’t take long for Philadelphia Flyers defenseman Erik Gustafsson to make an impression with his new team.

Alain Vigneault has Flyers among NHL's elite. Now he looks to finish the job and win a Cup.

In a way, a coach’s initial year with a team is easier than the seasons that follow.

After an awful start, the Philadelphia Flyers seemed to find their game in the second period Thursday night at TD Garden, only to revert to th…

On the second shift of the season’s second game, Sean Couturier took a check, skated to the bench and tugged at his torso in pain.

VOORHEES, NJ - SEPTEMBER 12: Sean Couturier of the Philadelphia Flyers poses for his official headshot for the 2019-2020 season on September 12, 2019 at the Virtua Flyers Skate Zone in Voorhees, New Jersey. (Photo by Len Redkoles/NHLI via Getty Images) *** Local Caption *** Sean Couturier

Sean Couturier, left, grabs the stick of the Ducks’ Ryan Kesler. Couturier scored his 23rd goal of the season and got his 24th and 25th assists.

Whether Sean Couturier, right, and the Flyers can contain the Penguins’ Sidney Crosby will be a key to their playoffs series.