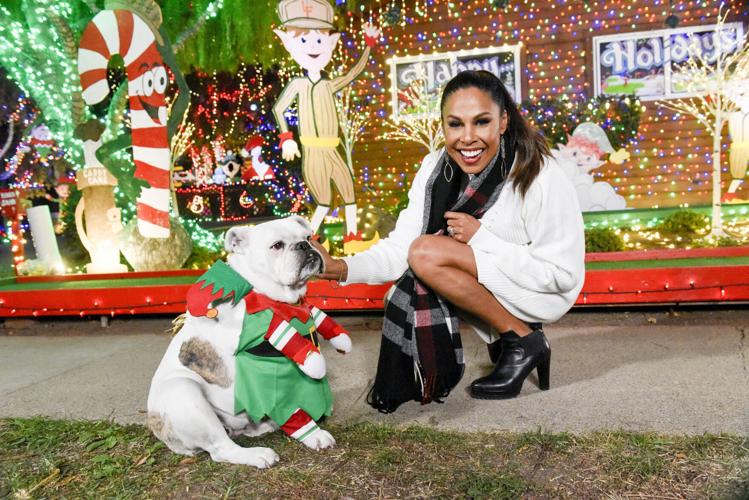 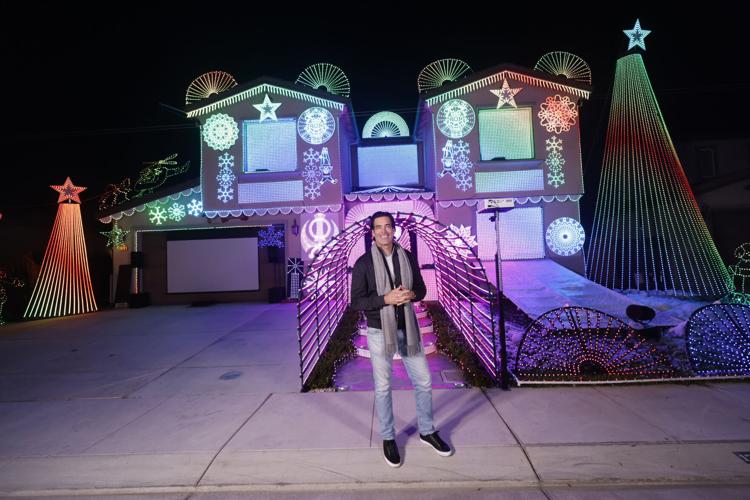 Judge Carter Oosterhouse checks out a home in “The Great Christmas Light Fight." 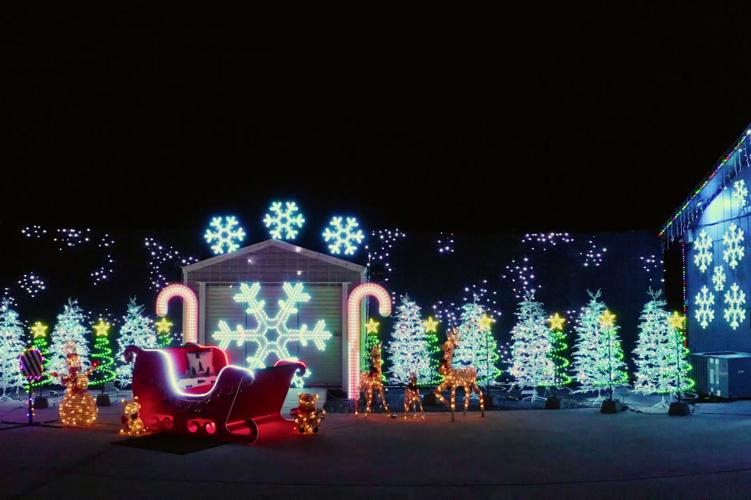 Home decorations vary from high-tech to nostalgic in "The Great Christmas Light Fight." 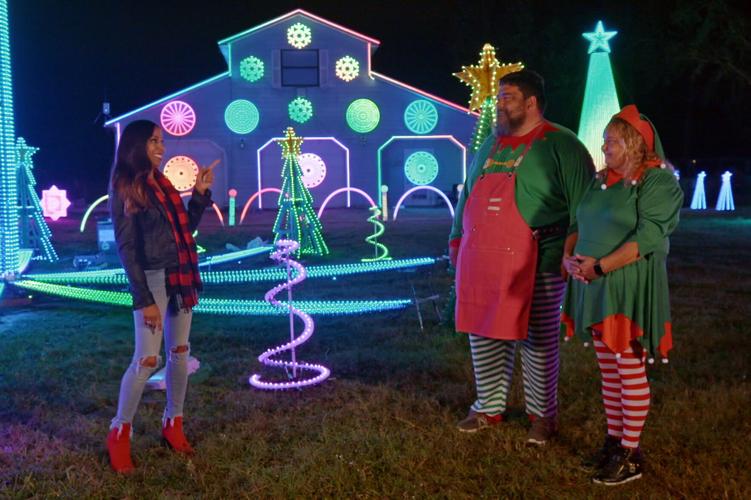 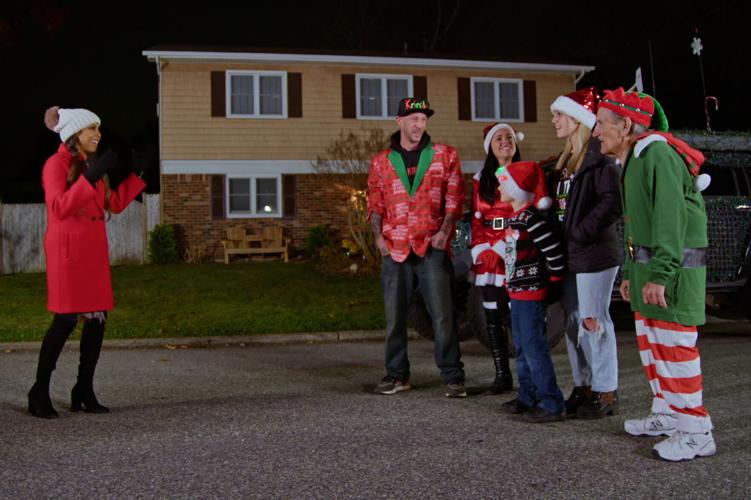 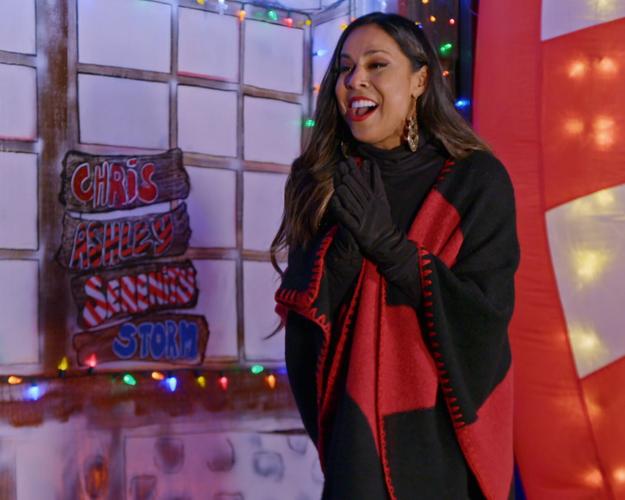 Putting up a huge Christmas display in your yard isn’t obsessive; it could be therapeutic, according to Taniya Nayak, one of the hosts of “The Great Christmas Light Fight.”

“Some people are neat freaks and love to clean,” she explains. “Some love to cook, while other people hate cooking. And then there are people who put up lights.”

For many participating in the ABC competition, it’s not a last-minute thing. “These guys are thinking about Christmas all year round,” Nayak says. “They’re thrift-shop hunting, they’re going to yard sales, they’re going to places where they can buy things in the summertime.” Dec. 26 sales? They’re in.

Ten years after the first “Light Fight,” displays have gotten more elaborate. “It’s not so much trends in design, it’s trends in technology. Ten years ago, they didn’t have access to LED lights the way they do now.”

Looks vary because home owners have different inspirations. “In one episode, we’ll see four different displays – one might be nostalgic, another may be very animated. Some look like carnivals,” Nayak says. Contestants have even turned their homes into gingerbread houses that look “good enough to eat.”

While Nayak doesn’t have time to go full-Griswold on her own home (the show is shot one year in advance and she and co-host Carter Oosterhouse are traveling during the December crunch), she does like the trend toward a rainbow of colors. “If you had asked me before I started doing this, I would have said I liked more classic, warm, white lights. But I’ve seen so many things that just blow my mind, I now love the colored lights. It just makes you so happy.”

Nayak says the show’s popularity has encouraged others to get into the game. “We have a lot of people that say, ‘You know, I started decorating my house because I was watching the show.’ There’s a really amazing community of, let’s call them ‘light fighters’ who interact with one another.”

Home decorating looks, like fashion, go in cycles. “Now, the ‘70s are coming back,” Nayak says. “We see a lot of bell bottoms and big hair these days.” Likewise, the push toward nostalgia, with a classic or retro vibe.

Luckily, electric bills have gone down because of LED lights, prompting many home decorators to expand their displays.

Home decorations for Halloween have blossomed as well, “which blows my mind,” Nayak says. “You put a tree up and, all of a sudden you’re like, ‘Wow, I’m exhausted. That’s a lot of work.’ Imagine decorating like that for two seasons.”

While a $50,000 check and a Christmas light trophy might be incentive for many to get involved in the “Light Fight,” Nayak says a lot of contestants play the game because they love to make their community happy. “I think that’s what drives them every year to do more or to change it up.”

Memories they have from childhood fuel a desire to give someone else that same feeling. “It’s something they’ll never forget.”

Also, the competition pulls in all ages: “You can be a baby, you can be 80 years old and everyone in between, and you’re going to love seeing it.” When Nayak and Oosterhouse get down to picking winners, they find it’s the hardest part of the job.

To date, 237 homes have been featured. Divide that number by four and that’s how many homes have gotten the “Light Fight” trophy. “It’s just an awesome, awesome trophy,” Nayak says. And, surprisingly, those winners are more than willing to keep quiet about their win until the show airs the following year.

When Nayak is done Dec. 13, she plans to unpack her own memories. She and her husband are going to host their whole family this year and, yes, there will be decorations.

Lisa Loring, best known as the first actress to play Wednesday Addams in the original "The Addams Family" sitcom, has died at the age of 64.

Actor Annie Wersching, best known for playing FBI agent Renee Walker in the series "24" and providing the voice for Tess in the video game "The Last of Us," has died. She was 45.

Gina Rodriguez digs into obituaries in new comedy, 'Not Dead Yet'

When David Windsor and Casey Johnson were looking for story ideas, they discovered they both loved reading obituaries.

Cindy Williams, who played Shirley opposite Penny Marshall’s Laverne on the popular sitcom “Laverne & Shirley,” has died. Williams' family said in statement Monday that she died in Los Angeles Wednesday after a brief illness. She was 75. Williams credits included the films “American Graffiti" and “The Conversation.” But she was by far best known for playing the straitlaced Shirley Feeney on the ABC sitcom “Laverne & Shirley.” The show, a spinoff of “Happy Days” was one of the most popular shows on television in its prime. It ran from 1976 to 1983.

The producers of “Anne Rice’s Mayfair Witches” didn’t just hire a witchcraft consultant to help them understand nuances of the best-selling book.

“Night Court” was a “tweener” television series. It was usually between other comedies and you didn’t mind its presence.

Five popular artists who have never won a Grammy

Prince Harry and Meghan Markle’s Lilibet is not the first royal baby to be born in the U.S.

Prince Harry and Meghan Markle’s Lilibet is not the first royal baby to be born in the U.S.

Phoebe Dynevor won't be appearing in season three of Bridgerton

Phoebe Dynevor won't be appearing in season three of Bridgerton

Judge Carter Oosterhouse checks out a home in “The Great Christmas Light Fight."

Home decorations vary from high-tech to nostalgic in "The Great Christmas Light Fight."