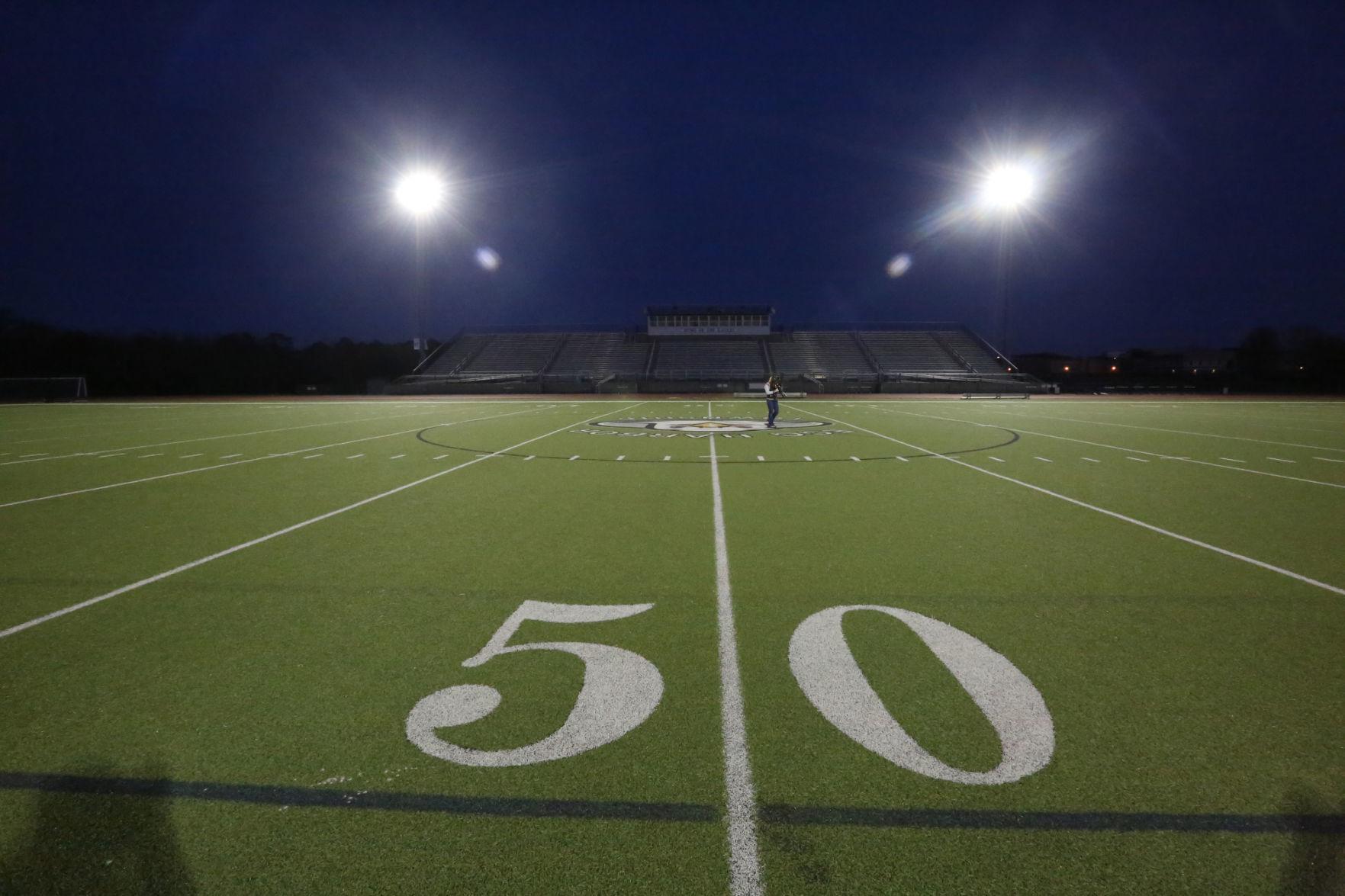 VERNON OGRODNEK / For The Press

The lights were turned on at the Egg Harbor Township football stadium to honor seniors who cannot be in school for their last year due to COVID-19, Wednesday, April 22, 2020. EHT is joining high school around the region in honoring the 12th grade class in this way during the crisis. (VERNON OGRODNEK / For The Press) 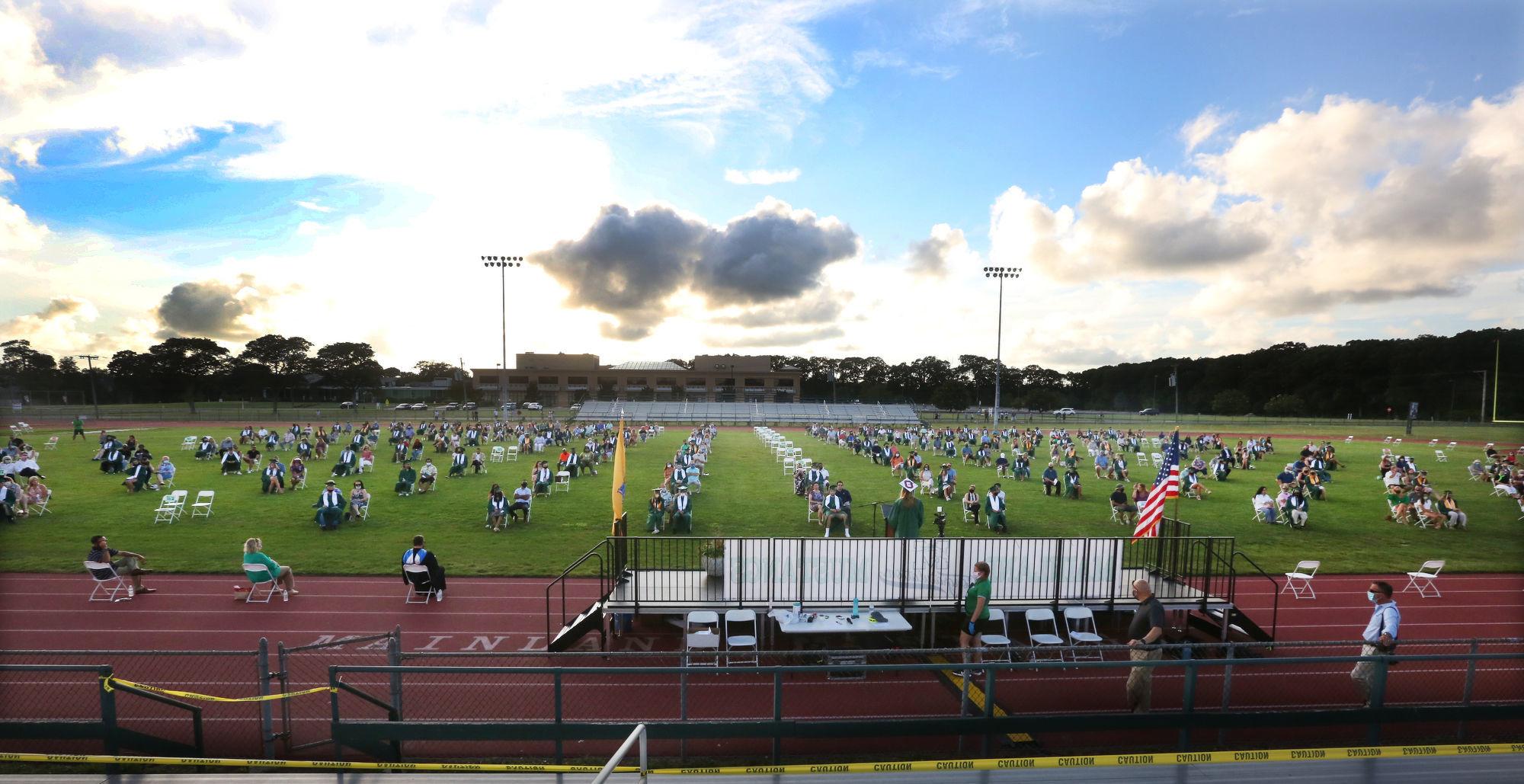 VERNON OGRODNEK / For The Press

‘We will forever be known as the Class of 2020, the class that graduated during a pandemic,’ National Honor Society co-President Christian Pepe said Thursday during Mainland Regional High School’s graduation ceremony.

Valedictorian Sakhi Shah faces the empty bleachers as she addresses her classmates. “Standing before you today, graduates, no one could have predicted that this is what our graduation would look like,” she said Wednesday during the high school’s 2020 commencement ceremony.

Matthew Strabuk / For The Press

On July 7th, Seniors of Middle Township High School were able to walk during their commencement ceremony at the athletic field adjacent to the Middle Township elementary school. Mayor of Middle Twp. Tim Donohue addresses the graduates.

Seniors with last names between M and Z toss their caps in the air after Pinelands Regional High School Principal Troy Henderson certified that the class of 2020 had fulfilled all of its requirements for graduation. This was the second of two commencement ceremonies held Thursday, July 9, 2020.

After months of waiting for their closing moment together, South Jersey’s high school Class of 2020 finally celebrated this week the accomplishments of more than 12 years of education.

“Here’s to the future lawyers, teachers, politicians, police officers, business executives, doctors, nurses and more that sit with us now as the Class of 2020. You all have so much promise to do amazing things,” Ocean City High School senior Haley Stanks told her classmates Thursday at an otherwise empty Carey Field as parents watched a livestream from screens set up just outside the stadium.

In-person ceremonies were hosted this week by more than 20 high schools in Atlantic, Cape May, Cumberland and southern Ocean counties per Gov. Phil Murphy’s executive order allowing them to begin Monday, as social distancing restrictions were eased amid the COVID-19 pandemic.

With maximum capacity limits set to 500 people, many schools had to decide whether and how they could hold a graduation ceremony.

Middle Township hosted the first in-person ceremony in the region Tuesday for its nearly 200 seniors. Attendees filled the bleachers but were spaced 6 feet apart, marked by black tape. Superintendent Dave Salvo joked, “If anybody ever asks you after today how many people were here, it’s 499 people.”

Democrat Amy Kennedy of Brigantine appears to have won the Democratic nomination for the 2nd Congressional District after her chief opponent Brigid Callahan Harrison conceded shortly after polls closed Tuesday.

In Egg Harbor Township on Wednesday morning, more than 300 seniors chose graduating as a class without an audience and sat on the field facing empty bleachers as they collected their diplomas. The remaining students returned later in the day with family for a more intimate recognition.

Egg Harbor Township Superintendent Kim Gruccio recounted that she began the school year with an EHT-themed parody of the Netflix show “Stranger Things,” and apologized for not knowing how truly strange things would turn out this year.

As noted by students and administrators in their speeches this week, the majority of the Class of 2020 was born just after Sept. 11, 2001, was raised in the age of social media, experienced adolescence in the aftermath of the financial crisis of 2008, terrorism and school shootings, and was preparing to enter the world of adulthood amid a global pandemic and a social justice movement.

In addition, each school had its own share of hardships and tragedies over the past four years.

At Pinelands Regional, the graduating class never spent less than two years in the senior high school building as asbestos issues caused it to close for their entire junior year and a few months of their sophomore year.

The senior class finally returned to the newly renovated building in September, but that, too, was cut short due to the pandemic.

At Pleasantville High School, students endured a shooting at their playoff football game against Camden that took the life of a 10-year-old Atlantic City boy and shook the community. Just as they began to emotionally recover, the pandemic shut down schools.

“We didn’t let the outcome of the football game define us, and neither will we let this pandemic define us,” Pleasantville valedictorian Lidia Orellana told her class Thursday. “Many of us are feeling mixed emotions during this time, but let’s put those aside and reminisce on the memories, hardships and good times that we’ve made over the course of our four years, especially our senior year.”

The theme of this year’s graduation was perseverance, as nearly all of the student speakers applauded their classmates for their ability to overcome adversity.

“Do you guys remember that feeling of walking through the metal detectors for the first time as we entered the building for our very first day of high school? Do you guys remember when the gym floor exploded, and we couldn’t have a regular gym class for the rest of sophomore year?” Sheikh Nahiyan, Atlantic City High School valedictorian, asked her classmates Wednesday. “Every day at the high school became the ‘new normal.’ ... We are faced with the threat of a ‘new normal’ yet again — but there is no other graduating class in this country better suited to tackle the next step and take on the ‘new normal’ that awaits us. After all, we have done it before — not once, not twice, but more times than I can count.”

What started as two small showers near Philadelphia blossomed into severe thunderstorms Monday, which brought a water spout to Stone Harbor, a…

South Jersey school board member resigns after posting that one solution to violence is to let Black people 'kill each other'
Melanie Burney The Philadelphia Inquirer
Jul 7, 2020

Mayor Marty Small Sr. said early Tuesday he felt confident about his chances to earn the Democratic nomination for a one-year unexpired term.

In a letter Tuesday to the New Jersey Office of the Attorney General and the Division of Elections, as well as to the Atlantic City clerk, attorney Daniel Antonelli said he had video proof of illegal actions by political organizer Craig Callaway, who backed Small’s opponent Pamela Thomas-Fields.

“The campaign has observed Callaway assisting voters by pointing out to voters who they should vote for,” the letter said of those voting provisionally in the city’s 2nd Ward.

Callaway could not be reached for comment, but the New Jersey Globe reported he contends he did nothing illegal, and his actions were done in clear view of Superintendent of Elections Maureen Bugdon and other officials.

“I’m sure you can understand I can offer no comment,” Bugdon said Friday.

It is unclear from voter education materials whether Callaway had the right to assist with provisional voting.

Materials on the secretary of state’s website say voters can request help with a voting machine, and two members of different parties must be available to help, but the voter can accept help from one or both.

But under provisional voting, the materials do not mention how help may be given. They do state, however, that voters must be given places to vote the ballot in secret.

The Atlantic County Board of Elections is still counting almost half of the 45,000 ballots cast in the election, but the latest numbers from Thursday afternoon showed Small in the lead with 2,537 votes to Thomas-Fields’ 1,216 and Jimmy Whitehead’s 184.

Small declared victory Wednesday, but Thomas-Fields has not conceded, and a member of her team said Thursday she is waiting for all ballots to be counted.

Callaway supported Harrison’s opponent Amy Kennedy, who appears to have won by a wide margin, although all votes are not yet counted. Harrison and Will Cunningham, of Vineland, Kennedy’s main opponents, have conceded to her.

Craig Carpenito, U.S. attorney for the District of New Jersey, did not respond to Harrison, who twice made the request, her campaign said.

Callaway is well known for organizing large vote-by-mail efforts in support of certain Democratic candidates. Pleasantville school board candidate Doris Rowell filed a lawsuit alleging Callaway improperly got hundreds of mail-in votes for her opponents in the 2019 election. 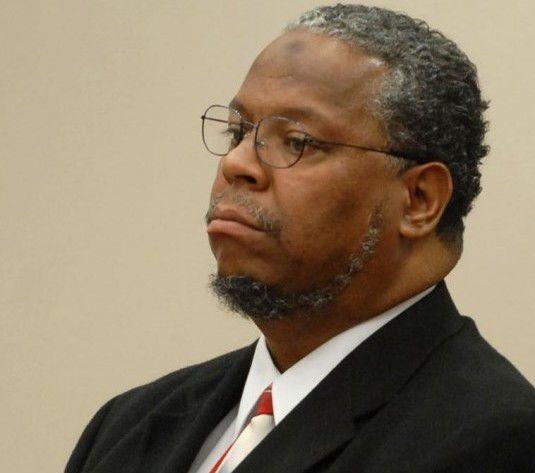