The Foundation for Individual Rights in Education, a nonprofit based in Philadelphia, sent a letter to Stockton President Harvey Kesselman on Friday disputing a complaint against Robert Dailyda, of Egg Harbor Township, who is pursuing his doctoral degree at the college.

Dailyda was not available for comment by phone Friday afternoon.

Stockton spokeswoman Diane D’Amico confirmed Dailyda was a student and that the case was open, but said the college could not comment on open cases. 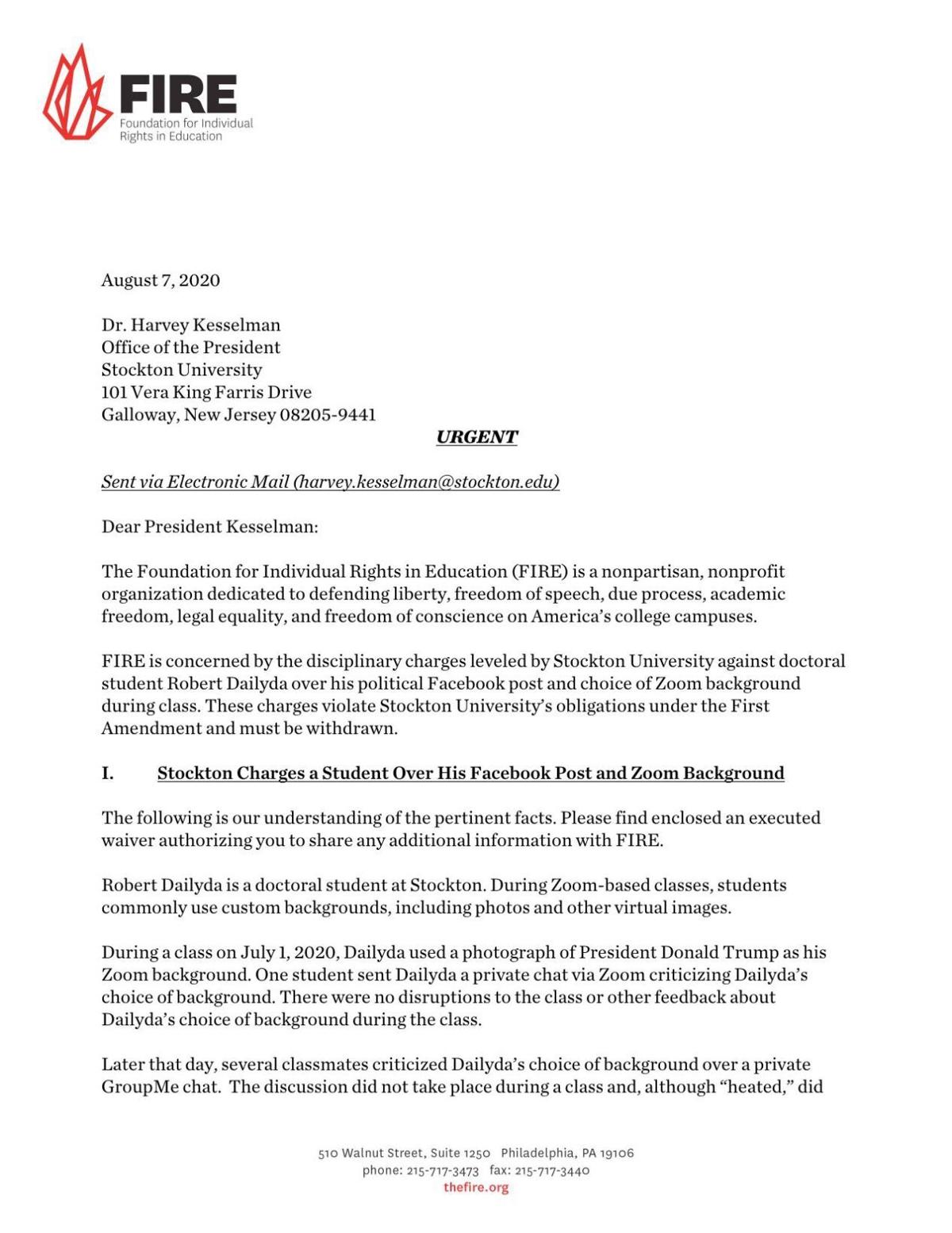 According to the complaint, which was attached to the FIRE letter and posted on the organization’s website, the incident began July 1 during a Zoom meeting with Dailyda’s class in which he used a background image of President Donald Trump.

The Zoom background prompted a “heated” but “not threatening” discussion after class in a group chat, the complaint states. Following the discussion, Dailyda posted on Facebook, “I love this country. We are a diverse, yet assimilated population from all backgrounds. I believe all must have the same opportunities and I commit to make that a priority. Beyond that, I am done with the leftist agenda of BLM and the white self haters. I have seen it in action in my doctoral classes at Stockton and the general media. I’m not backing down. If we can’t get past this, ok, I’m ready to fight to the death for our county and against those that want to take it down. I believe there are also many like me.”

Another unidentified Facebook user commented on the post, “Bob Dailyda that’s what we do. (Quiet) but ...we aim with precision. Boom done. No drama.”

The complaint against Dailyda acknowledges he did not make or respond to that comment but states “the reporting parties did mention the words sounded threatening and they were concerned that Mr. Dailyda may have similar views and thoughts of violence.”

GALLOWAY TOWNSHIP — “It’s the things that you take for granted, that you don’t think about,”…

Dailyda was notified in mid-July of the complaint against him in a letter from Craig Stambaugh, Stockton’s assistant vice president for student affairs, engagement and community development, and the potential violations of the campus conduct code he was facing: disruptive behavior, discrimination, harassment, hostile environment, harm, bullying and cyber bullying.

Dailyda had until noon Friday to make a plea to the charges. According to the college’s policy, the case will be assigned to a panel for a hearing. The result of the hearing may be appealed.

The letter from FIRE, signed by Zachary Greenberg, program officer for the Individual Rights Defense Program, calls on the college to stop pursuing charges against Dailyda and states that Dailyda’s expression is protected speech, does not disrupt university activity and does not amount to an “unprotected true threat or harassment.”

“Stockton may not permissibly use its disciplinary process to punish Dailyda for his protected political expression,” the letter reads.

New Jersey on Saturday reported 379 new coronavirus cases for a statewide total of 184,429. It confirmed nine new deaths related to the virus,…

The Cherry Hill School District could become the first in New Jersey to mandate that students take an African American history course to graduate.

Stockton to house some students at Showboat amid COVID-19

Some thought it would never happen, but Stockton University students finally will move into the Showboat in Atlantic City due to COVID-19.

Stockton University’s Board of Trustees on Wednesday unanimously approved a resolution that reinforces its “commitment to diversity, equity, i…

Rowan College of South Jersey will hold classes remotely this fall, with the exception of those that require a hands-on component. At Atlantic…

Calls for justice and equality at Juneteenth rally at Stockton