Campaigning in a pandemic, Van Drew and Kennedy are ready for anything

When students sit down to take their standardized tests this spring, they will notice some changes.

As the New Jersey State Board of Education considers eliminating two of the six state-required tests in high school, the Department of Education (DOE) is moving forward with changes it can make on its own: renaming and shortening the tests.

In a memo to school administrators Oct. 5 and updated Oct. 12, NJDOE Assistant Commissioner Linda P. Eno announced that instead of the Partnership for Assessment of Readiness for College and Careers, known commonly as PARCC, the tests will be called the New Jersey Student Learning Assessments — NJSLA for short.

In addition, the tests will have fewer questions and take less time to administer, the memo reads.

“These changes do not go through the State Board process, but are implemented by the Commissioner,” the memo reads.

“The main change for students and schools is there will be less time spent on testing. Depending on the grade and subject, it will be approximately 25 percent less testing,” said DOE spokesman Michael Yaple. 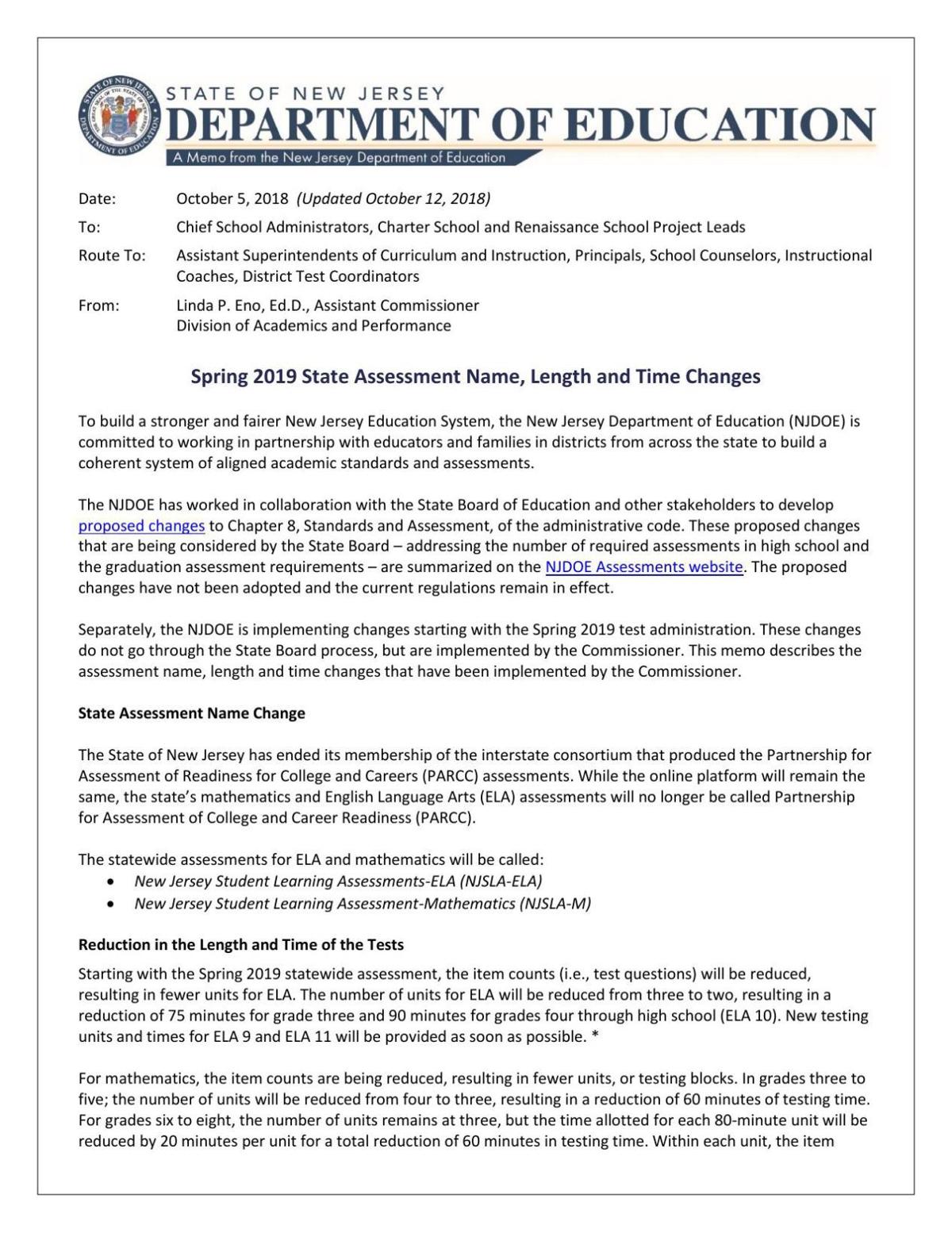 Steve Baker, spokesman for the New Jersey Education Association, said the changes are “a positive development.” The union, which represents about 175,000 teachers and support staff in the state, has been a supporter of changes to PARCC proposed by Commissioner Lamont Repollet and Gov. Phil Murphy over the summer.

The shortening of the exam and renaming of the test were announced in July following an outreach tour with stakeholders from around the state. In a report, the DOE said it would reduce the time of testing from nearly eight hours to six. The report states the change is possible because of the DOE’s partnership with New Meridian, a nonprofit that provides test design and support. The organization was selected by the PARCC consortium in 2017 to license test content.

School districts in South Jersey said they are still learning about what the changes to PARCC will look like in the spring.

He said the PARCC tests was too long for students and implementation was difficult, so educators will be pleased with the changes announced so far.

Pinelands Regional School District English supervisor Gina Frasca said she didn’t think the test would change that drastically because it was already aligned with the state’s student learning standards.

Margate interim Superintendent Thomas Baruffi said there was a consensus among educators, parents and students that the length and time of the test needed to be reduced.

“Logistically, it should help make administration of the test more manageable while hopefully reducing some of the stress on students,” Baruffi said.

He said the name change should help test perception.

“There were too many negative connotations tied to PARCC, often leading to unwarranted opt-outs,” he said of students who chose not to take the test.

Murphy still wants to phase out PARCC despite pushback

TRENTON — New Jersey Gov. Phil Murphy says his mind is unchanged about phasing out a controv…

“We are secure in our belief that Commissioner Repollet is working to do what is best for the students, teachers and school districts in New Jersey,” Yahn said.

In the latest memo, Eno wrote that the changes are interim and the DOE will explore long-term changes to the state assessment with the next phase of stakeholder outreach expected to begin this fall.

Baker said the most important change going forward for state standardized assessments would be to lower the stakes and reduce the intrusion on the school year.

“We’ve seen the damage done when you have lengthy, high-stakes tests that don’t provide immediate feedback, that don’t accurately measure the things they are being used to measure like student learning and teacher effectiveness. We need a better way of assessing student learning,” Baker said.

NJ Board of Education delays vote on PARCC changes

Murphy transitioning away from PARCC testing

ATLANTIC CITY — “How many have seen a house where the grass is this high?” Judge Henry L. Warner, holding his hand mid-chest, asked a class of…

TRENTON — New Jersey voters, in addition to deciding competitive Senate and House races, will also decide the fate of $500 million in bonds th…

State-adopted rules regarding the contentious state standardized test, known as PARCC, cannot be used to fulfill graduation requirements, a st…

The test is shorter and has a new name, but school officials say not much has changed in the administration of the statewide standardized test…