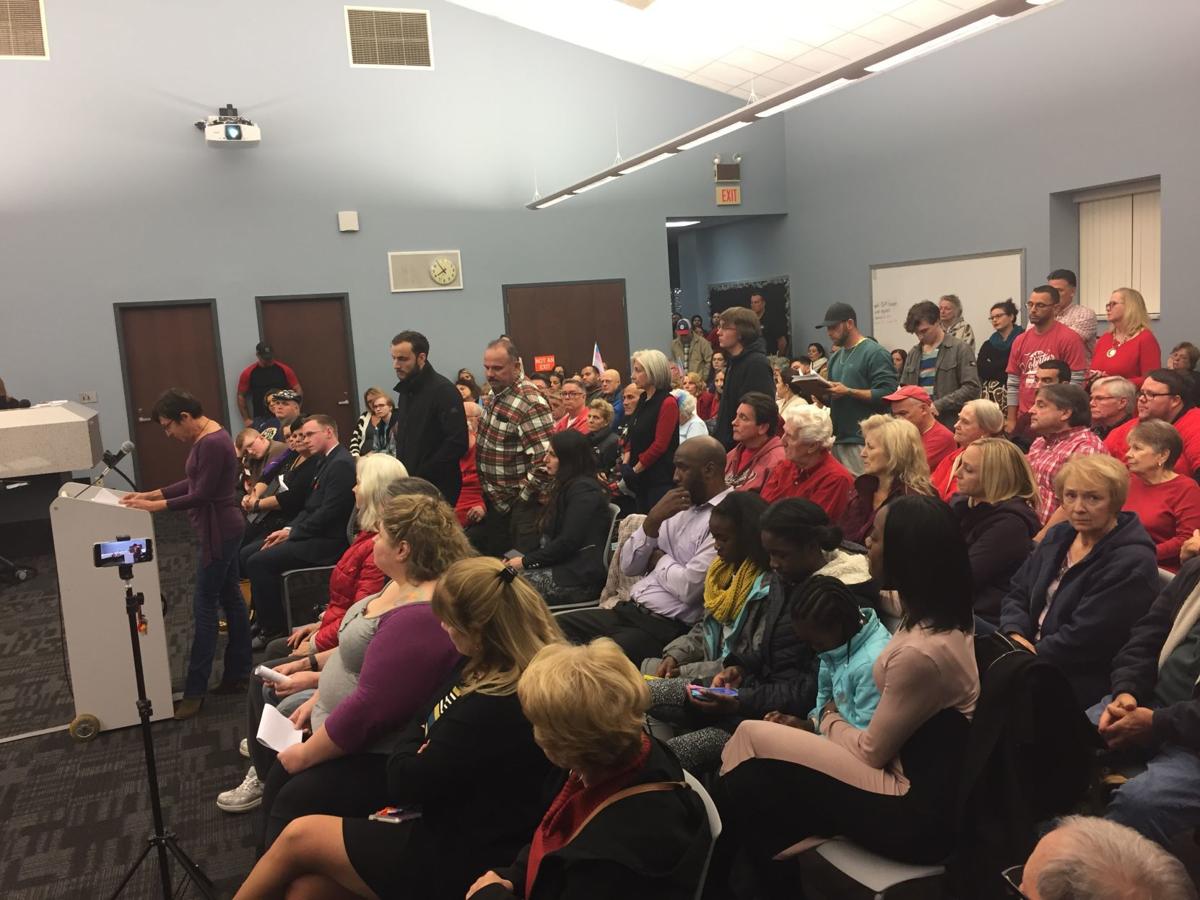 About 150 people showed up Tuesday to speak on the policy that dictates for staff and school officials proper pronouns for transgender students, parent notification processes and students’ access to facilities. Several wore red to protest the policy and others purple to show support. 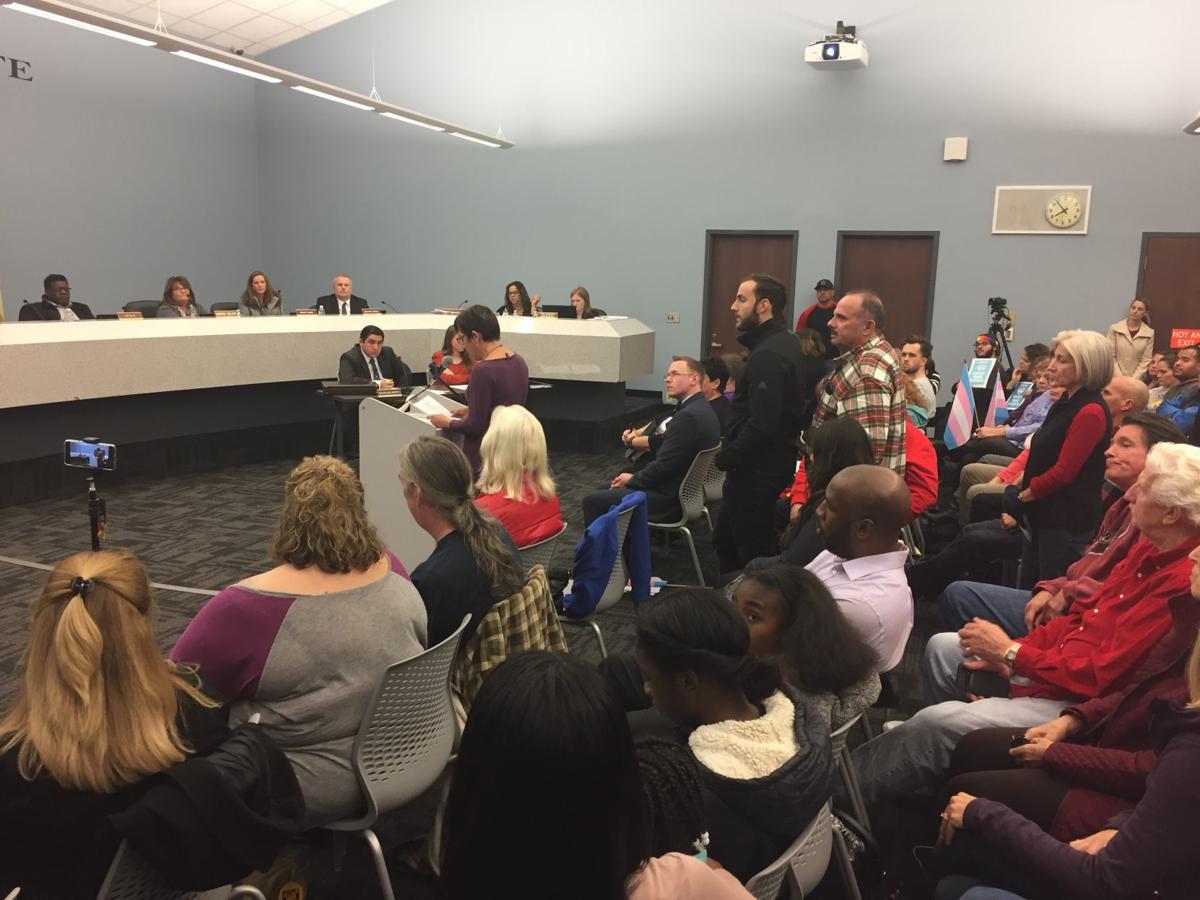 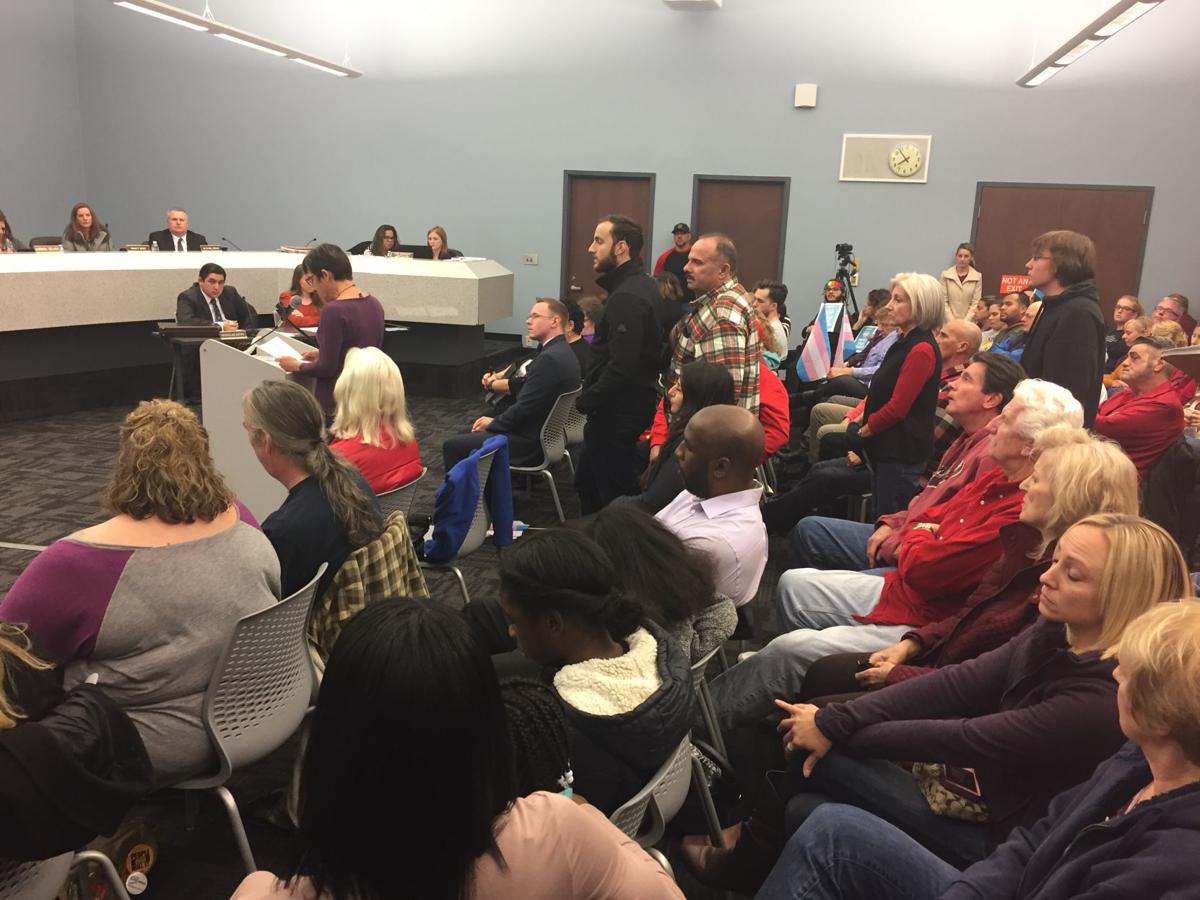 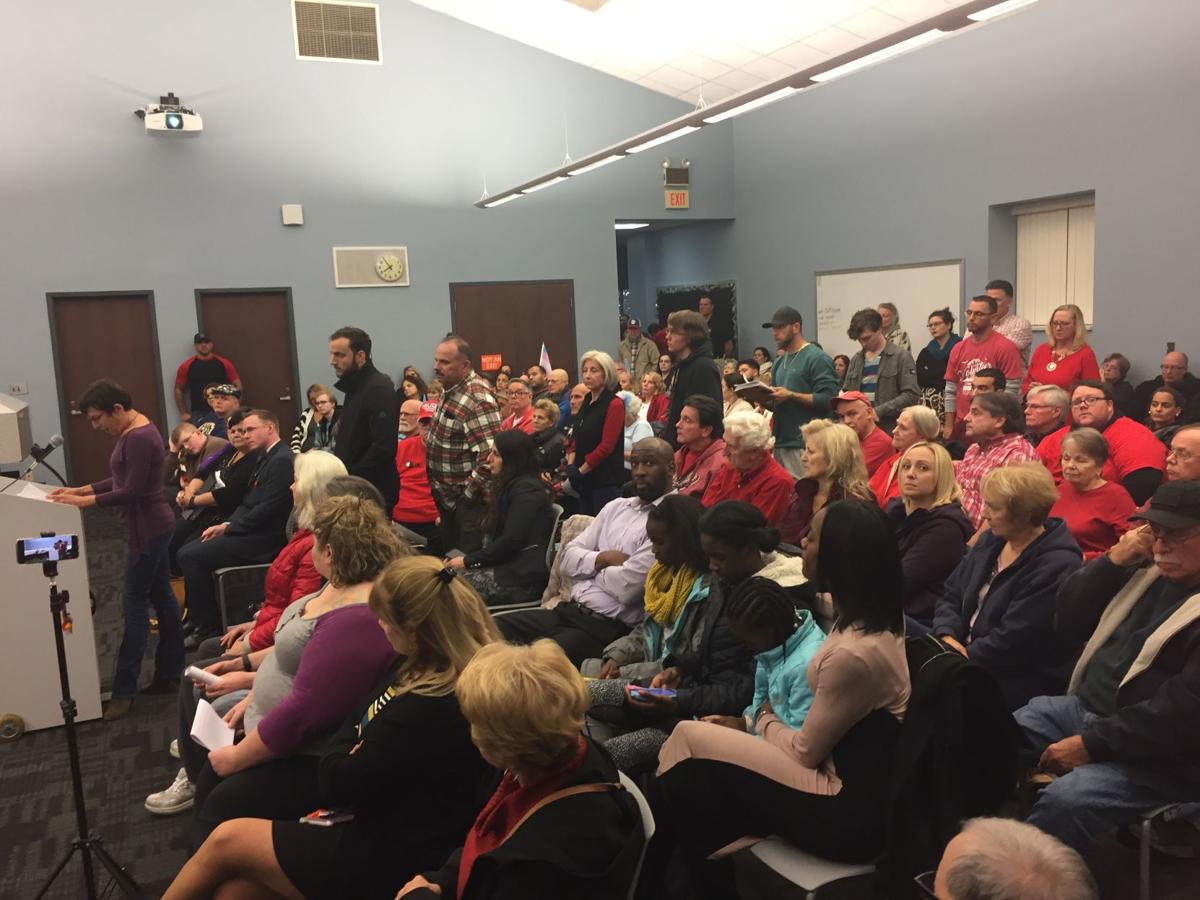 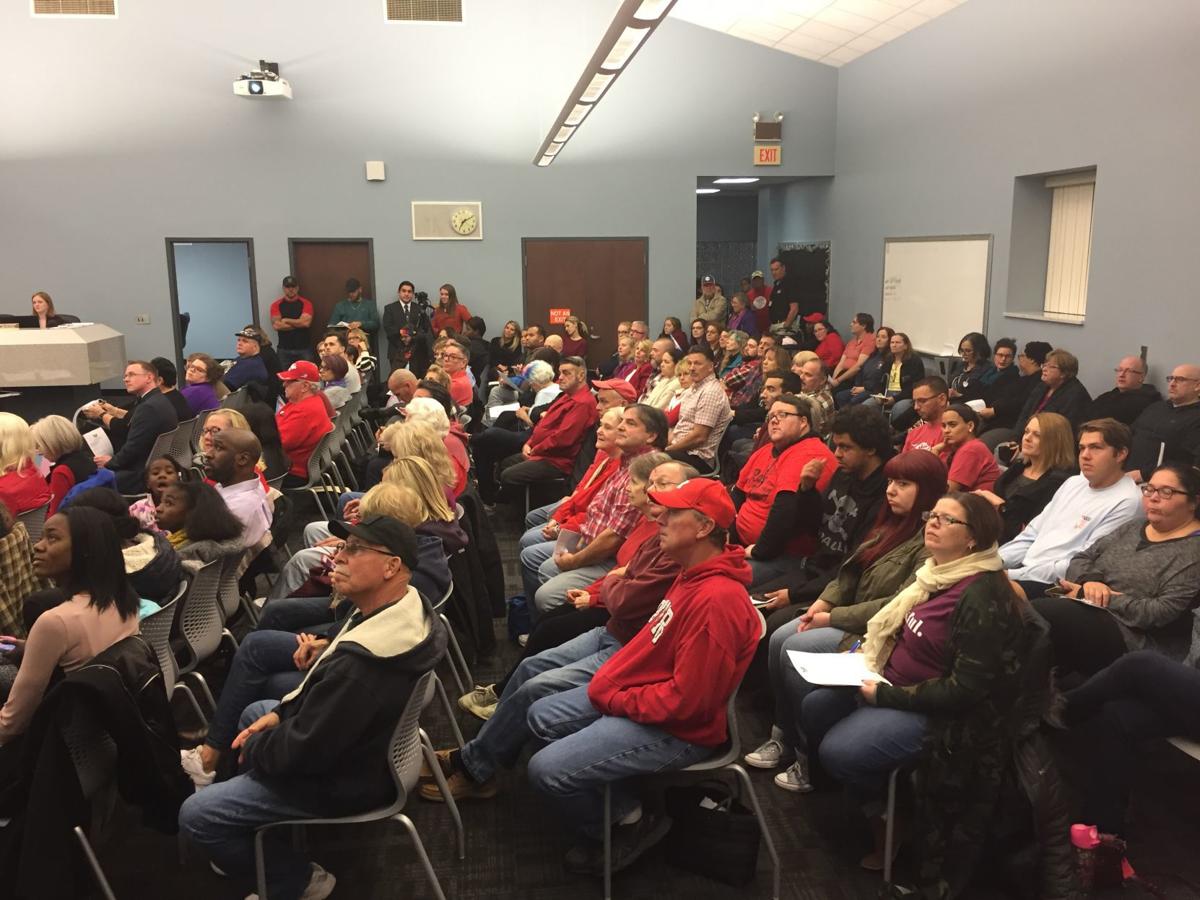 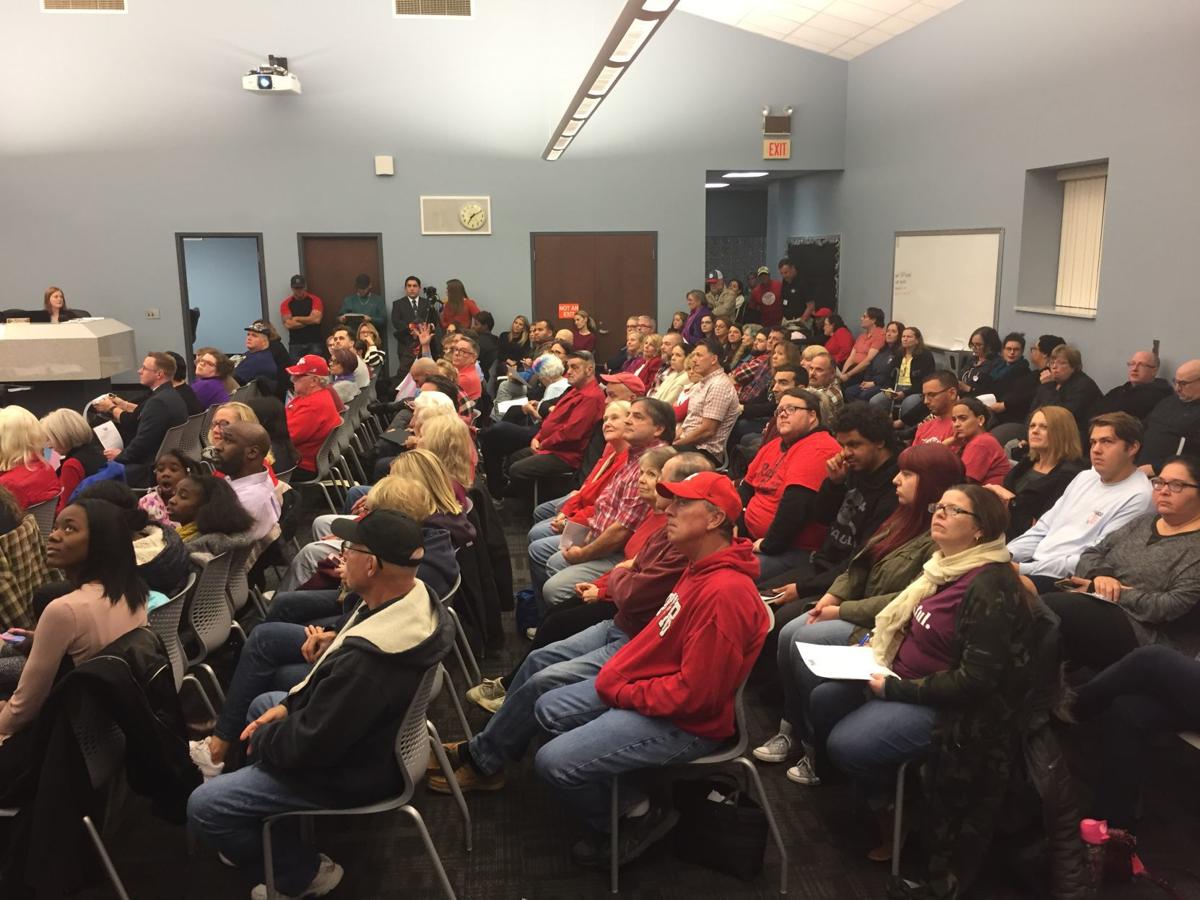 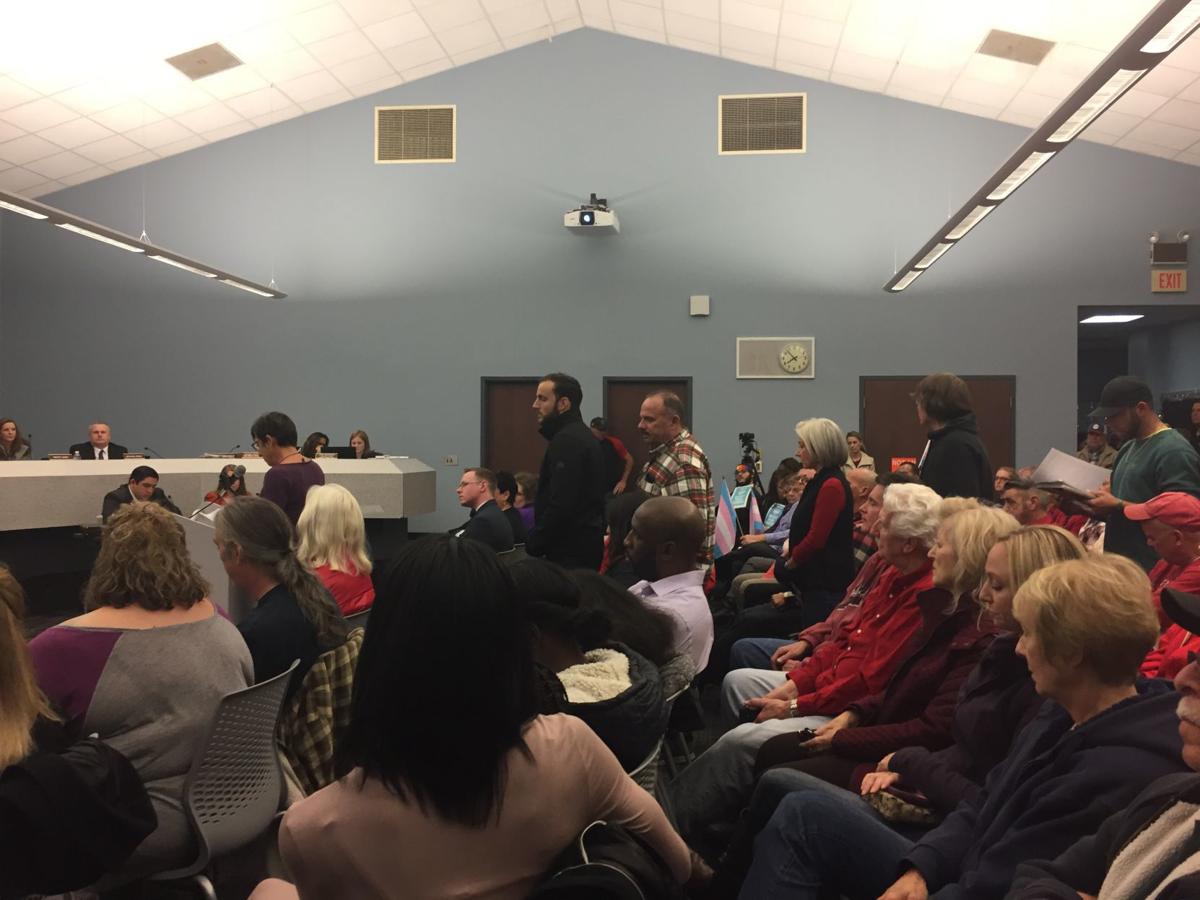 About 150 people showed up Tuesday to speak on the policy that dictates for staff and school officials proper pronouns for transgender students, parent notification processes and students’ access to facilities. Several wore red to protest the policy and others purple to show support.

EGG HARBOR TOWNSHIP — The school board approved a policy regarding the rights of transgender students Tuesday night after a contentious meeting that brought out a strong showing from the community both for and against.

“Regardless of if I agree or disagree with someone’s lifestyle, the students who come to this school, they’re our students,” board policy committee chairwoman Tamika Gilbert-Floyd said before voting in favor of the policy. “One person said, ‘We have to coexist together.’ That’s what we’re all trying to do.”

About 150 people, including some from outside the township, showed up to speak on the policy that dictates for staff and school officials proper pronouns for transgender students, parent notification processes and students’ access to facilities. Several wore red to protest the policy and others purple to show support.

The final 6-3 vote came after about an hour of public and board member comment but was years in the making. This is the second time the board has voted on a transgender policy, which was initially voted down in a split decision two years ago.

Since then, a state law was passed mandating that the New Jersey Department of Education create guidance for schools on passing a transgender policy. The township school board says it already abides by anti-discrimination laws, but a state review of the township’s policy revealed the lack of a specific policy regarding transgender students. School officials said that without a policy, the district faces the possible loss of millions in state and federal funding.

“I feel that it is a Trenton overreach and we have an HIB (harassment, intimidation and bullying) policy, we have Title IX that could be tweaked,” said board member Barbara Szilagyi, who voted against the policy. “I believe that every student should be respected and treated with dignity, and I don’t believe this policy does that.”

The latest transgender policy was approved on first reading in October but was amended to take into consideration concerns by residents and board members presented at the previous meeting, including the elimination of language stating that “the school district shall accept a student’s asserted gender identity; parental consent is not required.”

The amended policy also changes the language regarding access to facilities to make clear that any student who is uncomfortable using a sex-segregated restroom or locker room will be provided an alternative.

Board member Marita Sullivan, who also voted no, questioned how the policy will protect transgender students and asked board members how they would feel about being left out of a life-changing decision their child is making.

“We have not one reported case of bullying for transgenders in this district,” Sullivan said. “Do we honestly think that after we pass this policy that transgenders will come forward and start filing complaints?”

Member Pete Castellano said he voted for the policy because he took an oath to uphold the law, but also because he is against discrimination.

EGG HARBOR TOWNSHIP — What does it mean to be transgender, who can say they are, and when, w…

“The mission of this district is written on this wall: embrace, engage, educate. How can we do that unless each and every student feels safe and welcome?” Castellano said.

Board member Ray Ellis said the policy needed more time and initially abstained from the vote, but after more public comment, Ellis changed his vote to a “no.”

Those for the policy wanted it to add further protections and opposed the amendments added by the board after last month’s meeting that allowed the board to inform parents about a student’s gender identity. But many who were against the policy still took issue with that same amended portion of the policy, which they said violated their parental rights.

Several members of the public who commented spoke about their Christian beliefs, invoking the Bible, Jesus Christ and God, and stating that those values are missing from schools.

“We’re going to continue to pray, and may God have mercy on your souls,” township resident John Lee told the board after the vote was cast.

EGG HARBOR TOWNSHIP — A proposed school policy for transgender students divided the township last winter before the Board of Education killed the measure.

New Jersey’s elementary school students would be required to learn, read and write cursive by the end of third grade, under a bill in the stat…

This story has been updated with the latest date for the parent meeting.

MAYS LANDING — The Atlantic County Alternative High School may close at the end of the school year.

This was a great decision.

Stop the bullying. Live and let live. Young people from this community have extremely high rates of suicide resulting from constant hatred and ostracization, not only from their peers but also from so called Christians who should be including kids from this community and showing them the love of Jesus Christ instead of being so consumed with intolerance and hate. Try to understand. You don't have to agree. Just show them the love of Christ. If it flys against what you think is Christianity, then remember that non of us are perfect and all have sinned. Would you treat divorced people, adulterers, those who cheat on taxes, those who don't honor their parents, those who don't tithe or go to church with such overt disdain? Haven't those people also sinned? Isn't all sin equal in God's eyes? Yet you wouldn't dare treat those sinners the way you mistreat these kids who were born like this!

This is the first of many mistakes the school board has made. I know I wouldn't want my tax dollars going for something that goes against our beliefs. Maybe we should put our school taxes in a escrow until they do the will of the people! WRONG!!

We ALL have our tax dollars go towards what goes against our beliefs at some point or another. It's called Democracy. You think it doesn't go against everything in my being to have as president a predator who has legislated and put into practice the abuse of asylum seekers , detaining them in concentration camps, tearing their babies and children away from parents and conveniently "losing" over 3500 little ones? From the Torah to the Gospel to the Koran it commands us to welcome the stranger! Does it not go against your Christian beliefs for this ungodly abuse to be carried out? Yet trans kids using a bathroom is so horrific to you?

What was the vote total. Who voted yes and who voted no? Did I miss it?

No! It got shoved down our throats