TRENTON — The fate of the test formerly known as PARCC remains up in the air as a vote in a state Senate committee to amend graduation requirements related to standardized tests was delayed Monday.

This spring and next fall, local school districts will still be giving the test, recently renamed the New Jersey Student Learning Assessment, but the question remains whether the tests can be used as a requirement for high school graduation, which the courts ruled was contrary to existing state law. If the new bill is passed, the court’s opinion would be moot.

The bill, introduced last week by Senate Education Chairwoman M. Teresa Ruiz, would amend state law to allow for more than one standardized assessment to be used as a requirement for high school graduation and eliminates a requirement that the test be administered in 11th grade. It also allows current seniors and juniors to use the previous graduation requirements to obtain their diplomas. 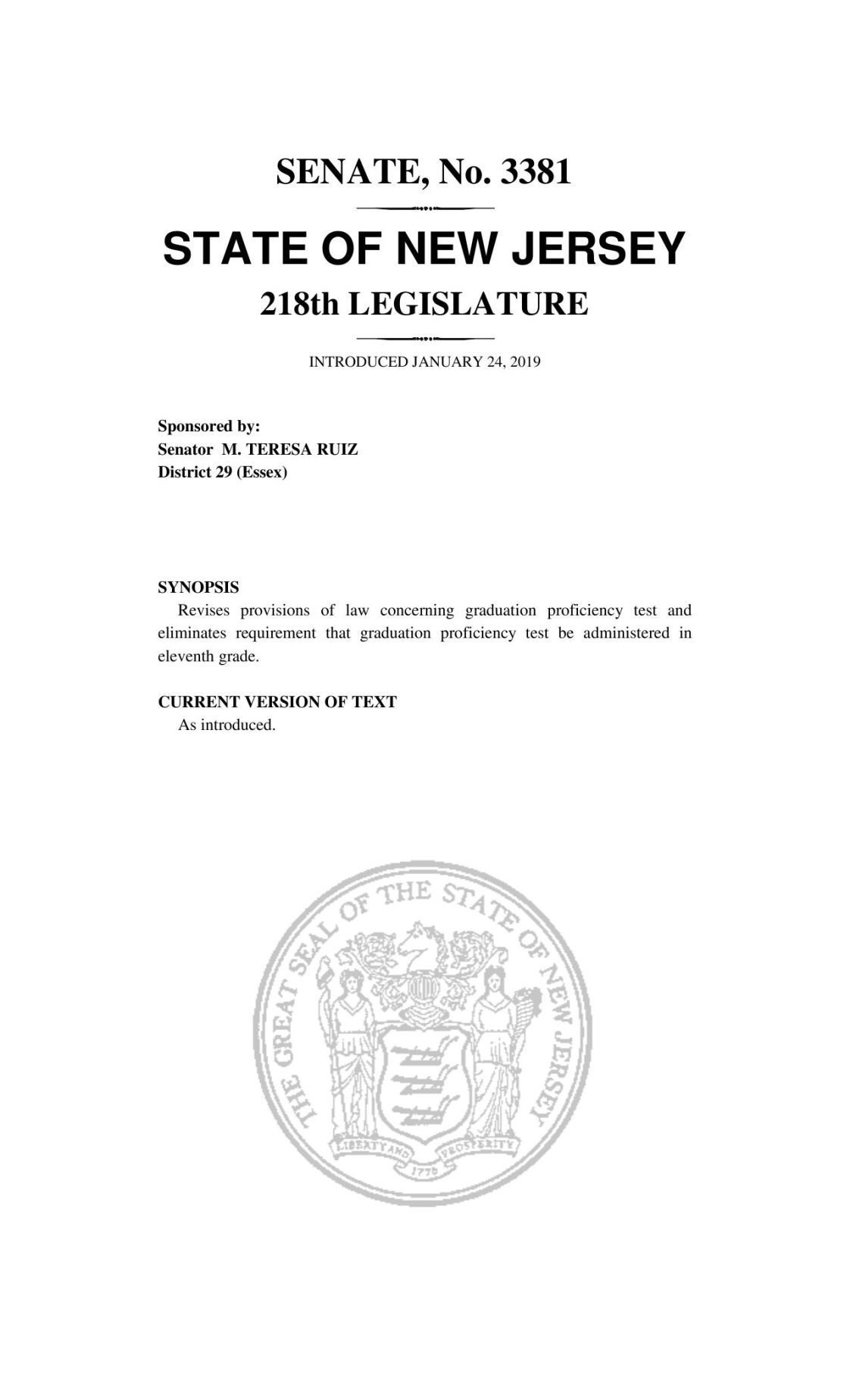 The bill was in response to a recent state appellate court ruling that invalidated the Department of Education’s 2016 changes to its graduation standards, Ruiz said during Monday’s budget and appropriations committee meeting.

In its opinion issued Dec. 31, 2018, the court said the amended standards violated state law by requiring multiple tests in different grade levels instead of one test in 11th grade.

Following the decision, state administration made a motion to the court requesting that students who had already partially or fully met the assessment requirements — those who are juniors or seniors — be exempt, according to court documents.

“The court’s invalidation of those requirements without the inclusion of a stopgap measure leaves these students, particularly the current seniors, in a state of limbo,” a brief in support of the motion reads.

A stay was issued by the court on its opinion so it can decide the motion.

A response to the state’s motion filed Wednesday by attorney Jessica Levin of the Education Law Center, representing the appellants, partially agrees with the state that there are students left in limbo by the court’s decision but chastises the government for not putting in place a contingency plan.

The appellants ask the court to clarify that its ruling will apply to students beginning with the class of 2023. They also ask that no students be denied graduation for failure to fulfill the assessment requirement or that all students currently in high school be able to fulfill the requirements by taking any of the tests available in the regulations that applied to the class of 2019, which were the broadest.

The Senate budget and appropriations committee did not vote on Ruiz’s bill as scheduled Monday at the request of the Governor’s Office and due to the pending litigation, according to a recording of the committee meeting available on the state legislative website.

During a statement on the holding of the bill, Ruiz said the state Board of Education had over the past year agreed on a path forward with regard to state assessments following a “very passionate” conversation that involved many stakeholders.

She said the proposed bill would codify what the state board had voted on and protect students who may be affected by the court’s decision.

“Unfortunately, certain stakeholder groups like to take advantage of the opportunities that arise to use this to pummel their conversation for long-term mission changes,” Ruiz said. “There isn’t anything in this bill that pulls the wool over anyone’s eyes. We’re not changing the course of where we want to move to with curriculum and next-generation assessment exams.”

After the bill was introduced last week, David Sciarra, executive director of the Education Law Center, asked Senate President Steve Sweeney in an open letter to allow public comment on the proposed legislation.

“The bill would also change the very standard for a diploma from ‘basic skills all students must possess to function politically, economically and socially in a democratic society’ to a vague and undefined ‘college and career readiness’ standard,” Sciarra wrote.

He said the bill has far-reaching effects, putting in place “new and unclear mandates for high school graduation for the classes of 2021 and thereafter.”

“However, we remain concerned about the gap resulting from the Appellate Division’s ruling, and feel that Sen. Ruiz’s bill would have remedied the situation,” Belluscio wrote Tuesday in an email.

“If that immediate issue can be resolved by the court, even temporarily, that would be a relief to those students and their families,” Baker wrote in an email.

The Cumberland County Women’s Hall of Fame will induct three new members during a gala April 24.

OCEAN CITY — Impressed with state Board of Education student representative Nora Faverzani and the things happening in her home district, New …

The test is shorter and has a new name, but school officials say not much has changed in the administration of the statewide standardized test…

N.J. Board of Education to meet Oct. 21 over standard test changes

TRENTON — The State Board of Education will meet next week to consider changes to state standardized test rules and graduation requirements.

State-adopted rules regarding the contentious state standardized test, known as PARCC, cannot be used to fulfill graduation requirements, a st…

When students sit down to take their standardized tests this spring, they will notice some changes.

New Jersey’s State Board of Education this week halved the governor’s plan to reduce the number of standardized tests required in high school.

Murphy still wants to phase out PARCC despite pushback

NJ Board of Education delays vote on PARCC changes

5 things to know as South Jersey heads back to school

South Jersey is gearing up to head back to school, with some students already back in the classroom this week.

Big areas of improvement are needed in South Jersey counties on child well-being if they are ever to catch up to their northern neighbors, new…

Murphy transitioning away from PARCC testing

ATLANTIC CITY — Gov. Phil Murphy announced the first steps New Jersey will take this school year to begin transitioning away from the current …

As New Jersey begins the process of evaluating its current school assessments, the Department of Education is requesting input from the public.

A Cumberland County charter school was denied a request for expansion by the Department of Education under new Gov. Phil Murphy, who also pled…

New Jersey Dept. of Education moves to transition from PARCC

Keeping true to Gov. Phil Murphy’s promise to move away from the current state standardized test, the New Jersey Department of Education last …

CAPE MAY — Cape May is known for its Victorian architecture, white sandy beaches and its iconic lighthouse. And now it will be known for educa…

LINWOOD — Educational success is not just about collecting the right information, but rather what is done with that information to improve stu…

Mainland, Cape May schools recognized by state as Lighthouse Districts

School districts around the state spend all year preparing students for the spring PARCC testing, but when the test is over, the work is far f…

Some local school districts saw improvements in the latest round of state standardized testing, but many students still do not meet proficienc…

Egg Harbor Township schools are moving in the right direction as far as its performance on the PARCC state tests, but there is room for improv…

To much applause, New Jersey last month became one of only a handful of states to have its Every Student Succeeds Act education plan — the rep…

ATLANTIC CITY — Inspired by the disparity he saw in the success of female students over male students, and thanks to legislation passed this s…

The signs covering a music room wall at Lakeside Middle School in Millville are a montage of musical humor: “Those are sharps, not hashtags,” …

TRENTON — The state Assembly passed a resolution Thursday calling on the state Board of Education to revise high school graduation requirements.

MULLICA TOWNSHIP — Andrew Weber remembers when he was a principal in Absecon and one of his students missed a lot of school because of illness.