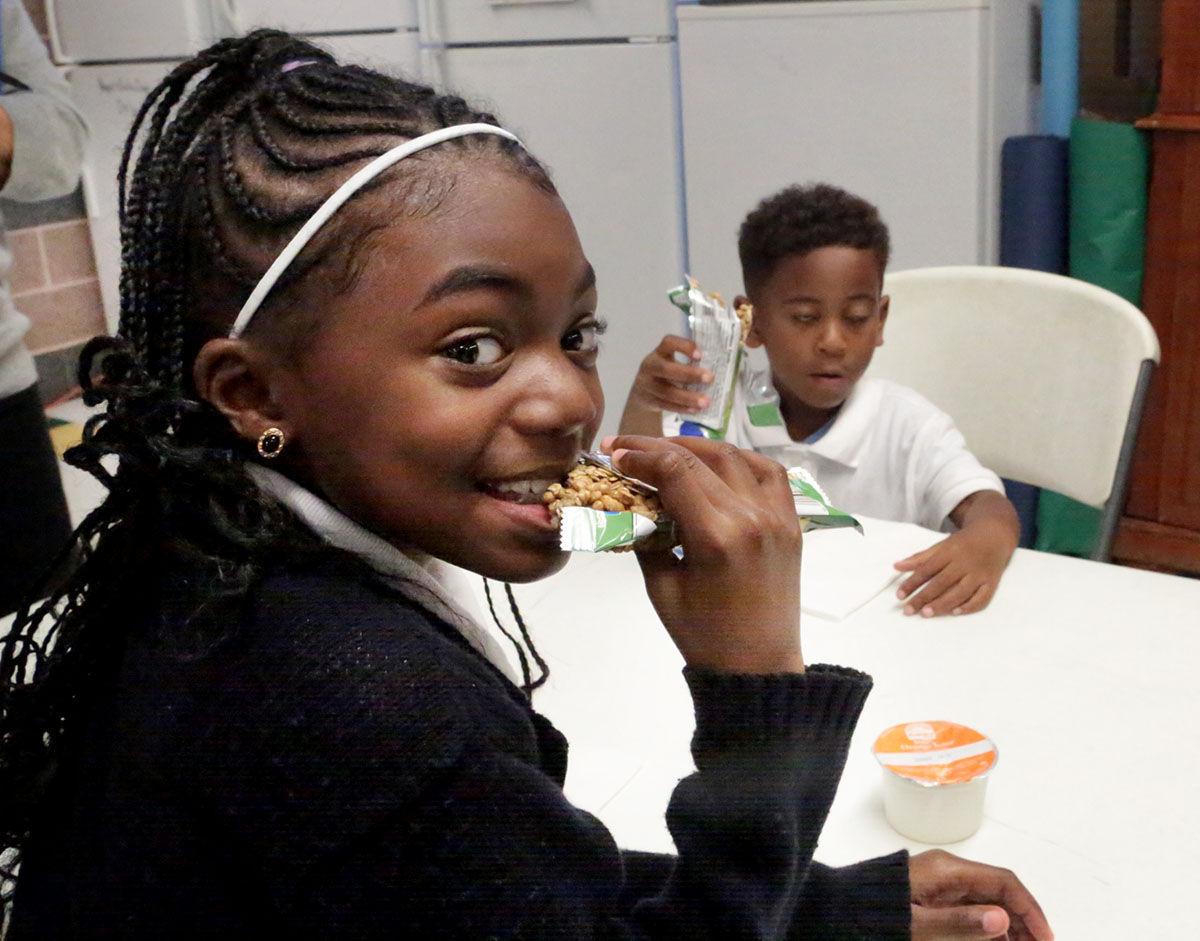 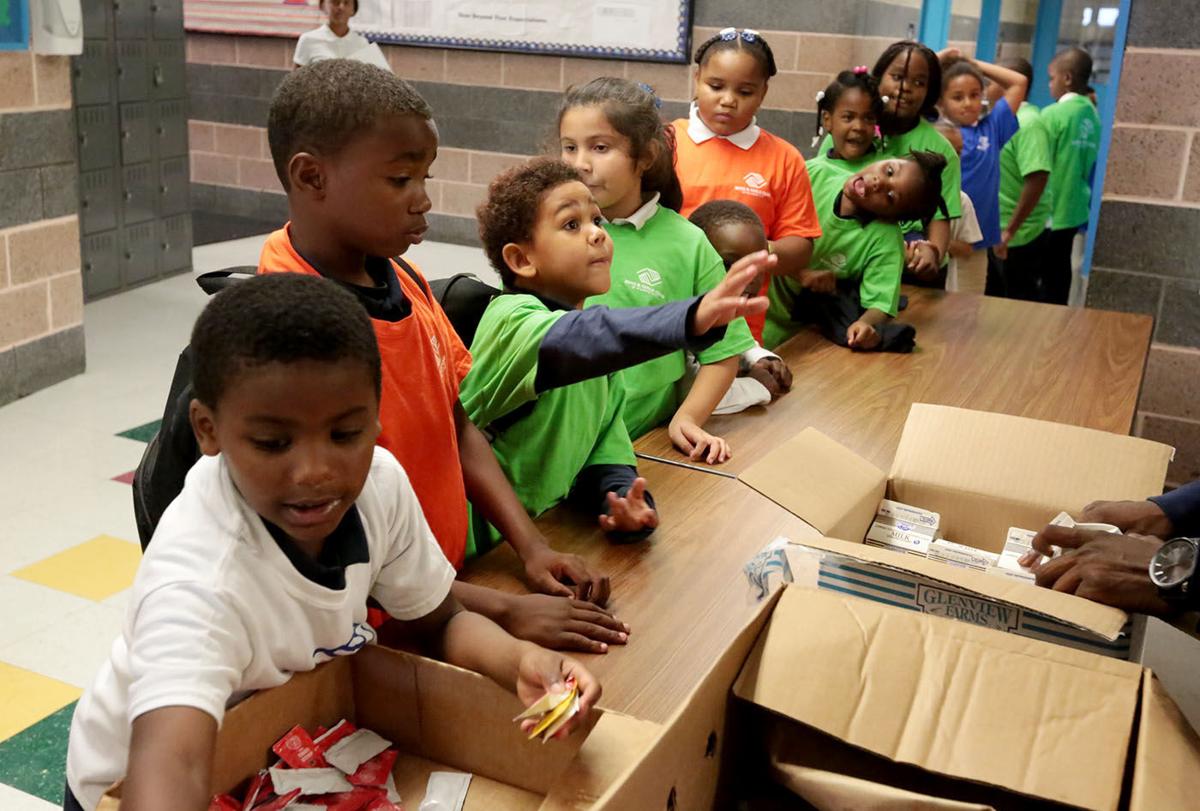 Children from Atlantic City receive snacks at the Boys and Girls Club on Tuesday. Representatives from Advocates for Children of New Jersey will be at the club Thursday to discuss the organization’s recent report on breakfast in schools and the ‘next frontier’ of after-school meals. The club offers a snack and dinner to participating students through the federal At-Risk Afterschool Meals Program. 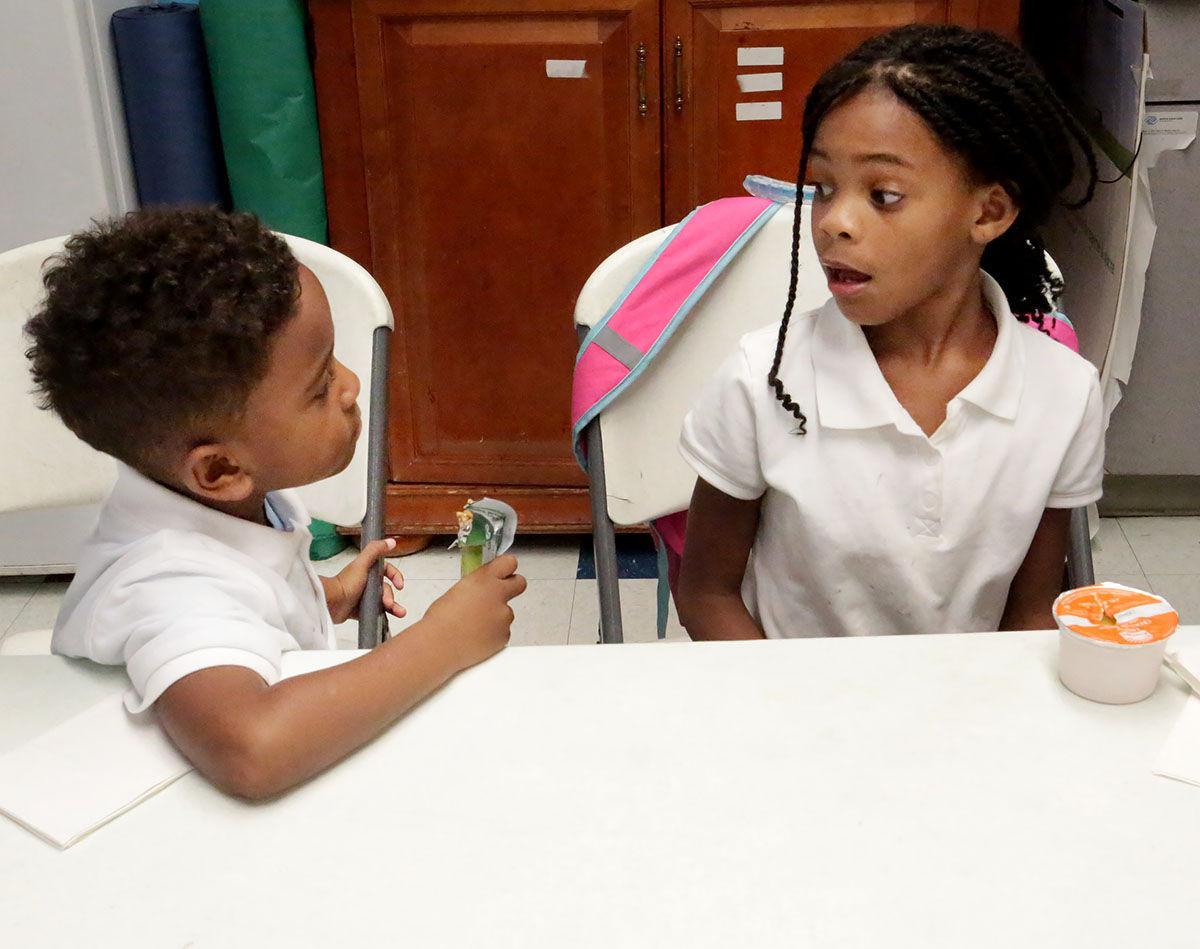 Rahmir Green, 5, and Honesty Green, 7, both of Atlantic City, talk over snack. 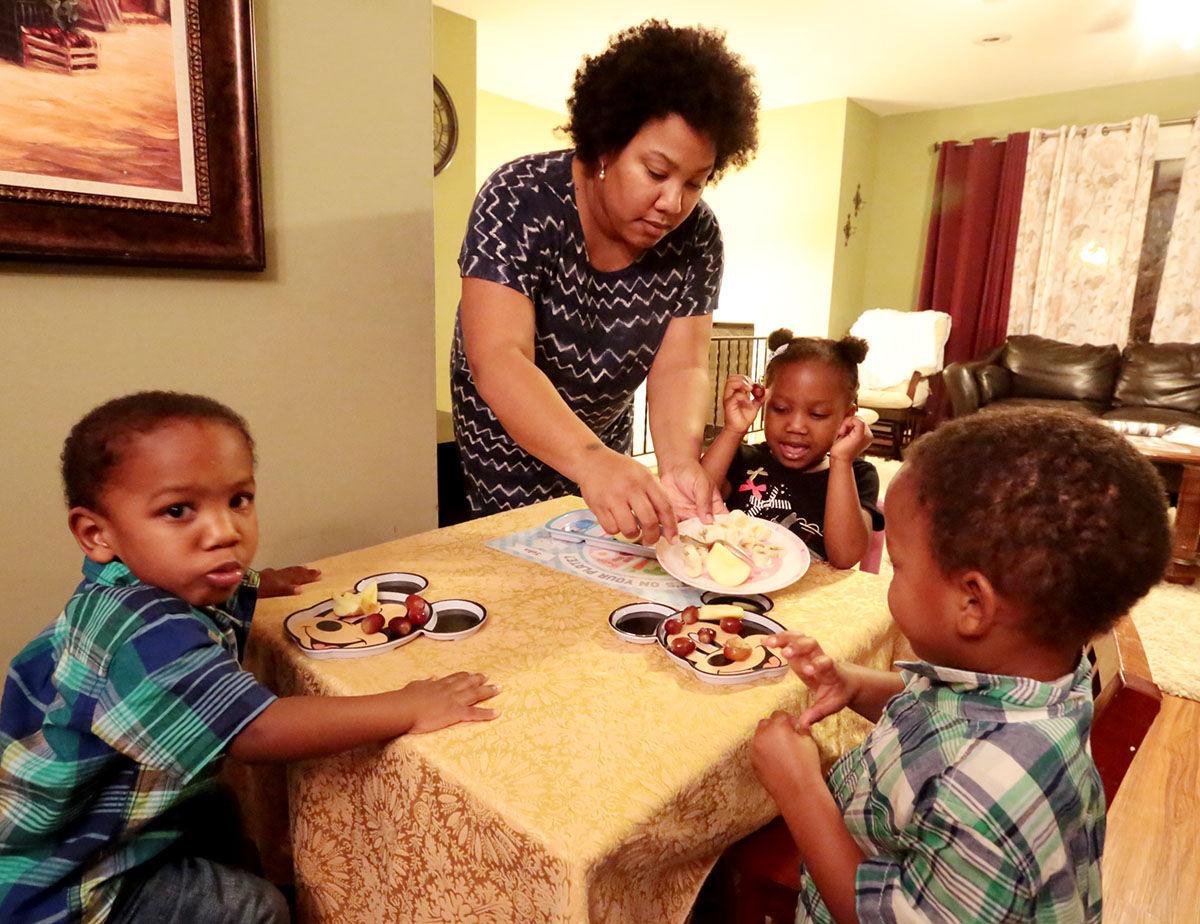 ‘In Atlantic City, the community was key to creating a community nutrition hub,’ says Adele LaTourette, director of the New Jersey Anti-Hunger Coalition. ‘It just takes an entity willing to take this on.’ 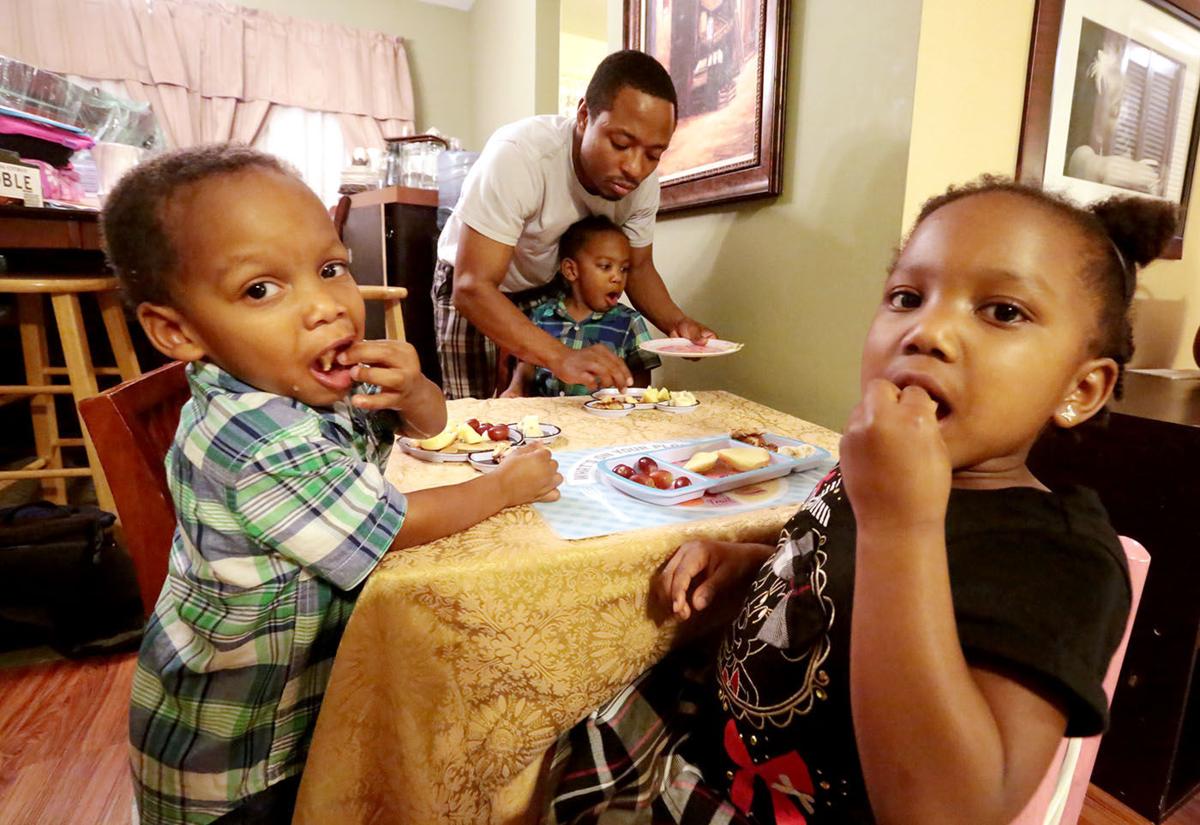 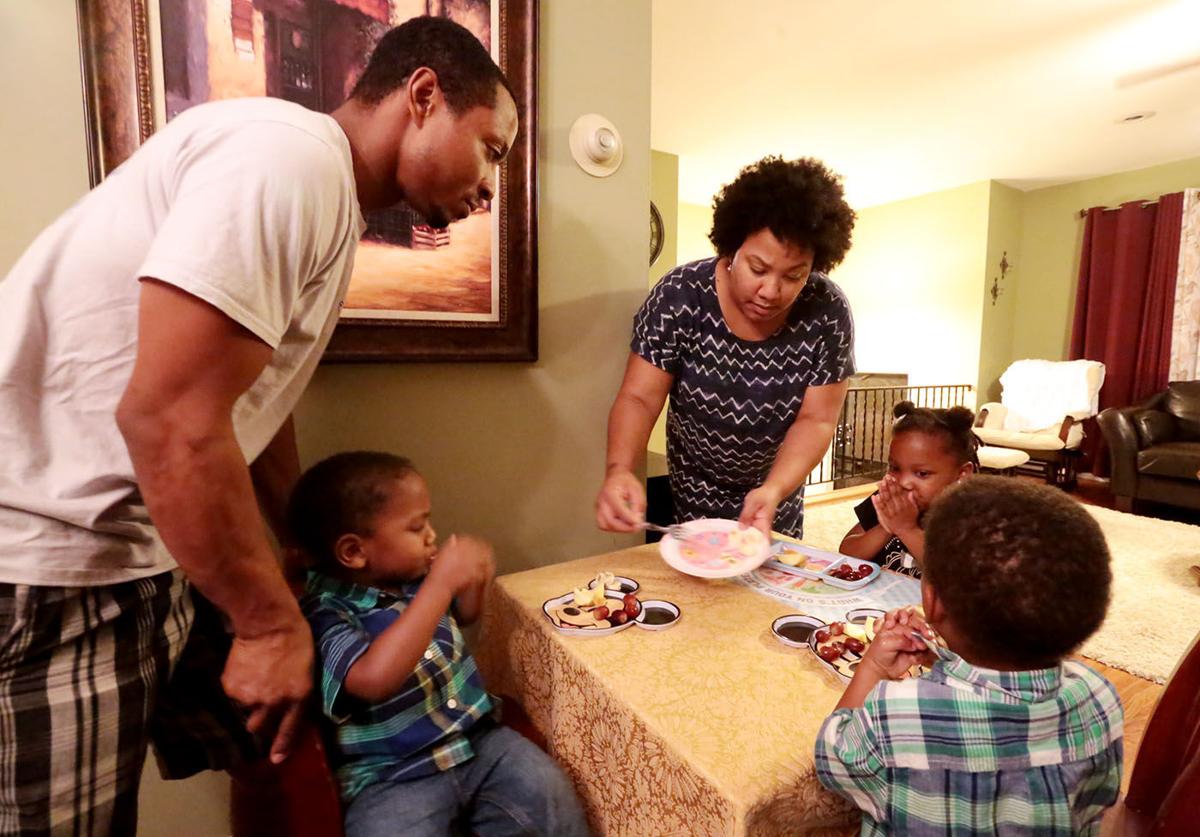 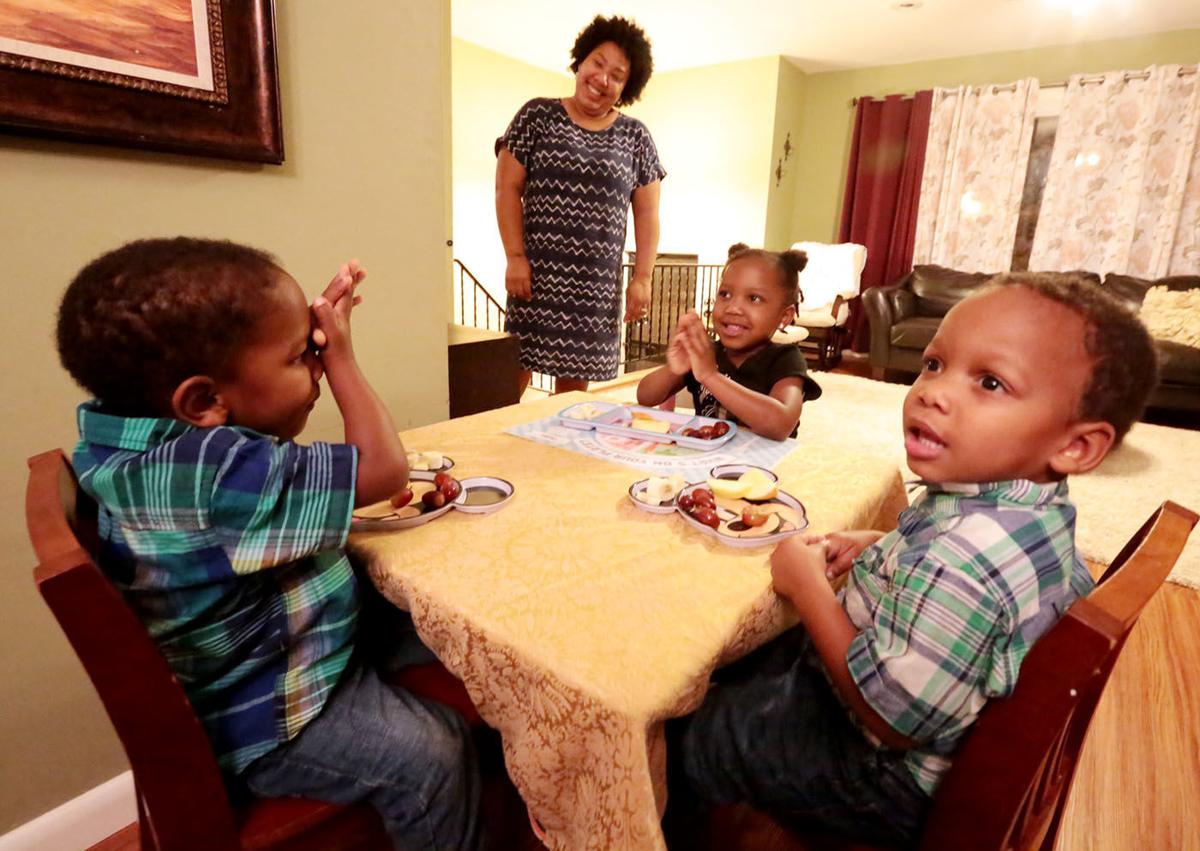 ATLANTIC CITY — How many community groups does it take to try to make sure all low-income children get three healthy meals a day, 365 days a year?

In Atlantic City, it has taken school, church and community-based agencies to coordinate a coalition that makes sure hungry children are fed year-round.

On Thursday, representatives of Advocates for Children of New Jersey and other agencies met at the Atlantic City Boys and Girls Club to share the latest efforts to get breakfast into schools and talk about how to expand those efforts to include dinner and summer meals.

“In Atlantic City, the community was key to creating a community nutrition hub,” said Adele LaTourette, director of the New Jersey Anti-Hunger Coalition. “It just takes an entity willing to take this on.”

A coalition of churches, AtlantiCare, the Community Food Bank, the school district and the Boys and Girls Club have worked to see that Atlantic City’s children are fed. Several sites offered meals over the summer, a program the ACNJ is hoping to see expand statewide.

“Everything we do here cannot be successful if the children do not have the energy that a healthy meal provides,” said Michelle Carrera, director of the Boys and Girls Club. The club provides an after-school snack and dinner to about 150 children a day through the federal At-Risk Afterschool Meals Program, which reimburses agencies that provide the meals.

On Thursday, the snack was a Cheerios bar and either juice or milk.

As children ate, chef Estephon Hunter, who also works at Atlantic City High School, got to work on dinner, preparing breaded chicken tenders, corn, potato salad and peaches. He spices up the prepared foods to give them a more homemade taste, and focuses on vegetables, including some from a garden at the club.

“I really push the vegetables,” he said.

A popular dinner item is chicken Caesar salad, which Nyia Canion, 9, said is her favorite dinner.

“I try not to give them the same thing they get in school, and I do get them to eat lettuce,” Hunter said.

Atlantic City interim School Superintendent Paul Spaventa said during the 2015-16 school year, the district served more than 1.1 million breakfasts, 992,000 lunches and 108,000 dinners, most of them to children in the free and reduced-fee meal program.

“The number of meals we serve is astounding,” he said, noting the district offers vegetarian and peanut-free options.

“You can’t educate a child if they are hungry,” he said.

ACNJ director Cecilia Zalkind said in every community that has been successful there has been a desire and driving force to make sure it got done.

“I know it can be hard to believe, but in New Jersey there are many children in families that cannot afford to feed them,” she said.

Warren DeShields, food service director for the Bridgeton school district, said Mayor Al Kelly has been a huge advocate there.

“He has a passion for this,” he said.

Speakers addressed the challenges they face, and their successes.

Kim Arroyo, director of programs and agency relations for the Community Food Bank of New Jersey, Southern Branch in Egg Harbor Township, which sponsored summer meal programs at 28 sites in South Jersey this past summer, said identifying and recruiting sites is a challenge but they hope to expand next summer.

Laura Engelmann, community health and wellness manager for AtlantiCare Healthy School, Healthy Children, said there was a lot to learn quickly last summer so they are hoping to get information out to parents earlier for 2017.

She said they were lucky in that the local people involved were the type to act, not just meet, and everyone was aware of the financial struggles facing Atlantic City and its residents.

“There was a sense of urgency to get the job done,” she said.

Carrera said there is some bureaucracy involved in joining the after-school meal program and tracking the meals, but the state Department of Agriculture helped them through the paperwork, and once the tracking system was set up it moves pretty smoothly.

“It does take some time in the beginning,” she said. “But the DOA held our hands.”

Rose Tricario, director of the Division of Food and Nutrition Services at the state Department of Agriculture, admitted the process can be cumbersome, but said they are working to simplify it for 2017, and they will help any group interested in participating.

She said they are encouraging partnerships and “farm to everything” programs like school gardens and other projects that teach children about nutrition and healthy eating.

The Boys and Girls Club works with restaurant owner Cookie Till to have cooking classes Wednesdays.

Carrera said she realized how much children don’t know about their food when she asked a teenager to get her a pepper from the club garden and he brought back a green tomato.

“It can be a challenge to get children to eat something new,” she said. “We try to do menus they like, but also menus that are healthy. It helps that we have our own chef.”

GALLOWAY TOWNSHIP — Askhia Khawaja knows a Ziploc bag of cheese puffs is not a meal, but it will get her through a week of trying to live on $…

ATLANTIC CITY — Julius Andersona was approved Monday as a member of the Atlantic City Board of Education.

STAFFORD TOWNSHIP — The first phase of the AtlantiCare Health Park project in Manahawkin is complete, with health services opening soon.

Almost 268,000 low-income children in New Jersey got free or reduced-price breakfast in the last school year, a 6 percent increase from the ye…

WILDWOOD — Leftovers never go to waste in Chef Stephen Serano’s cooking classes in the Wildwood School District, where almost half the student…

When the school year ends next month, so will a major source of meals for children from low-income families — free breakfast and lunch program…

TRENTON — Summer meal programs for children are increasingly important as families may be getting less support from food stamps and pantries, …

The number of low-income children getting free breakfast in school crept up to more than 225,000 in 2016, according to the annual report relea…

Children from Atlantic City receive snacks at the Boys and Girls Club on Tuesday. Representatives from Advocates for Children of New Jersey will be at the club Thursday to discuss the organization’s recent report on breakfast in schools and the ‘next frontier’ of after-school meals. The club offers a snack and dinner to participating students through the federal At-Risk Afterschool Meals Program.

Rahmir Green, 5, and Honesty Green, 7, both of Atlantic City, talk over snack.

‘In Atlantic City, the community was key to creating a community nutrition hub,’ says Adele LaTourette, director of the New Jersey Anti-Hunger Coalition. ‘It just takes an entity willing to take this on.’