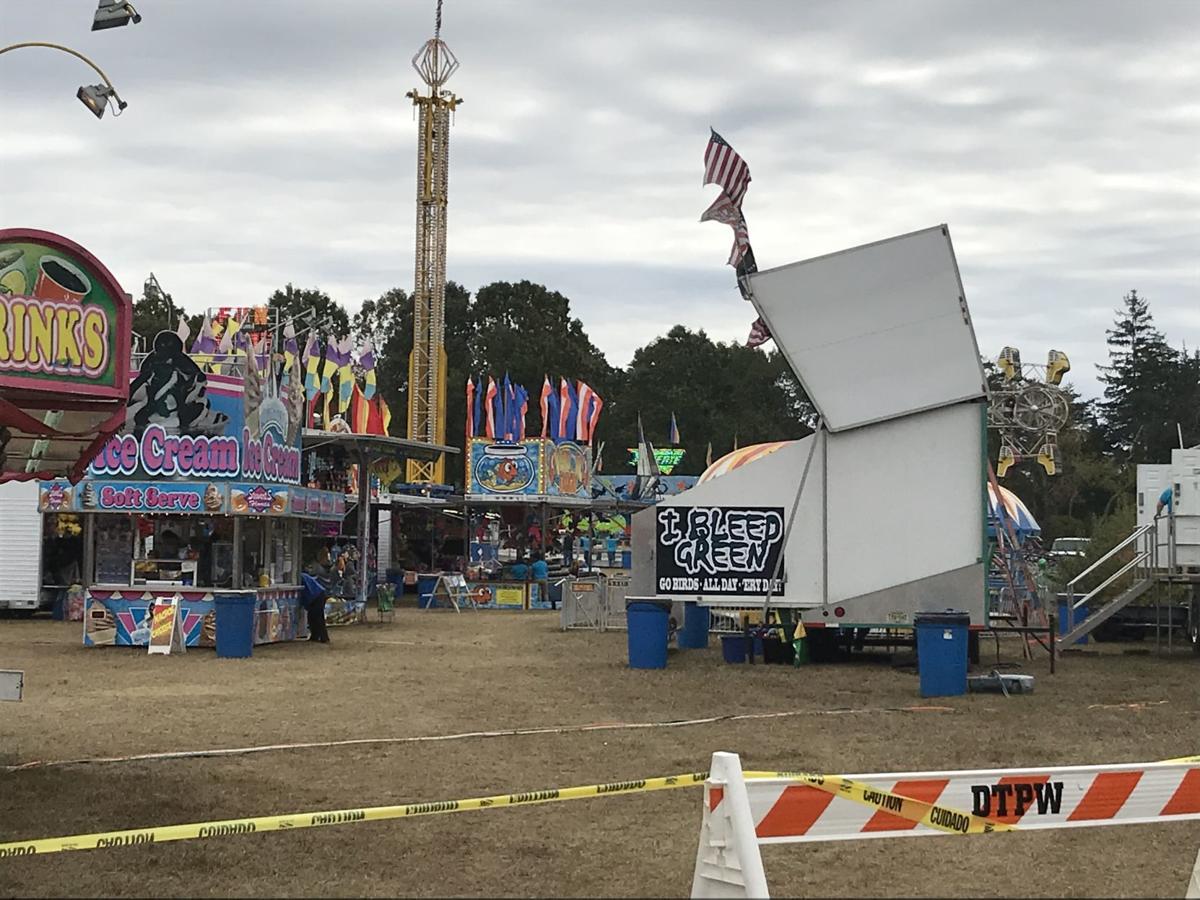 The rides at the Deerfield Township Harvest Fair are roped off Sunday after a 10-year-old girl was killed Saturday night after falling off one of them. 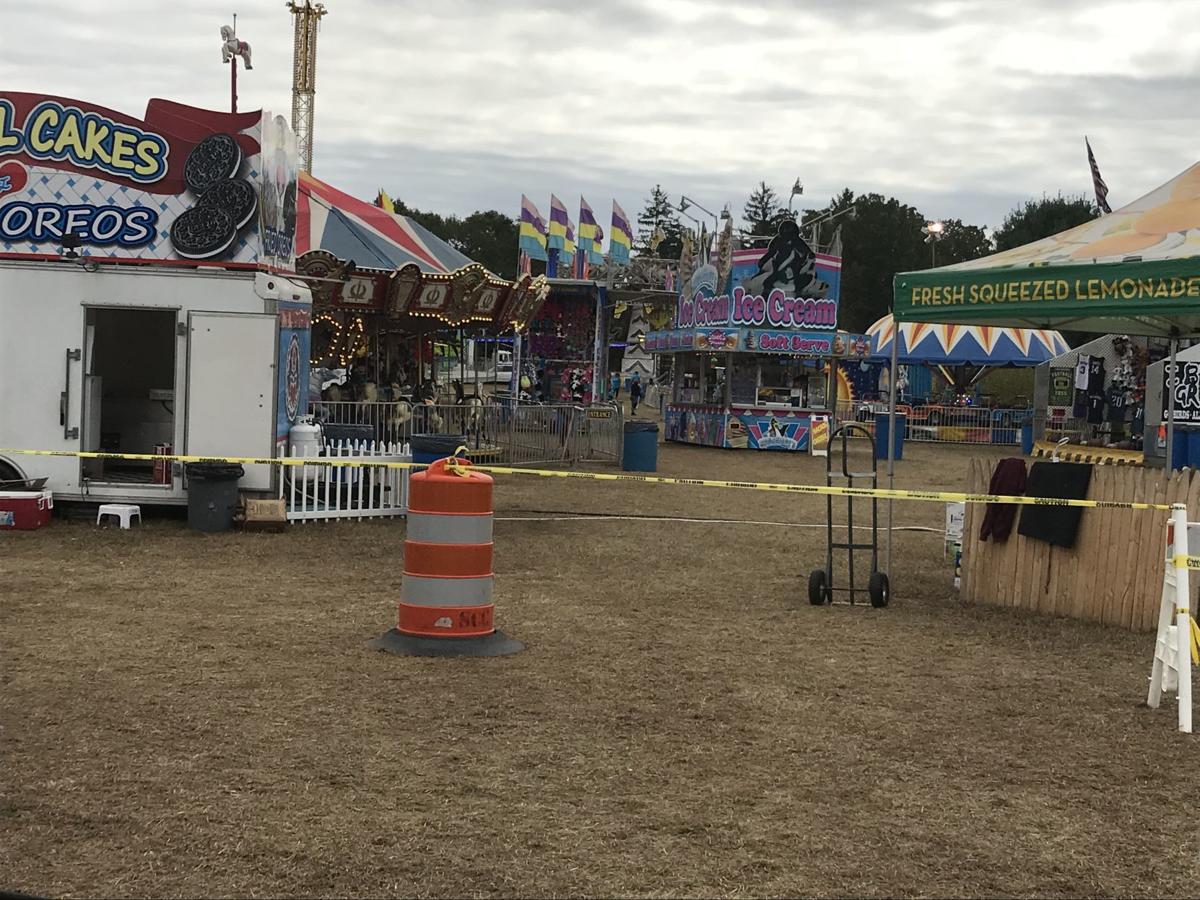 The Super Sizzler ride can be seen in the center background. A 10-year-old girl died Saturday night after she fell off the ride. It was provided by Skelly’s Amusements in Williamstown, which decided Sunday not to operate the other rides at the Deerfield Township Harvest Festvial. 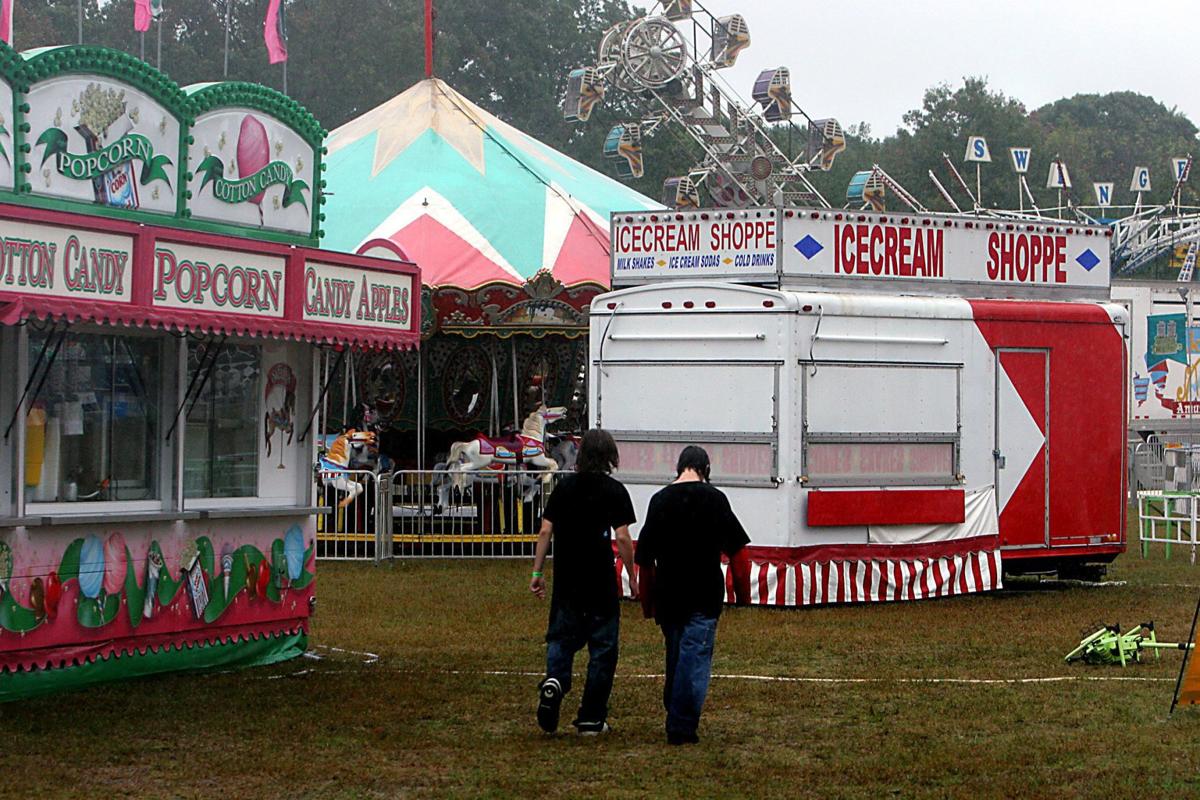 The rides at the Deerfield Township Harvest Fair are roped off Sunday after a 10-year-old girl was killed Saturday night after falling off one of them.

The Super Sizzler ride can be seen in the center background. A 10-year-old girl died Saturday night after she fell off the ride. It was provided by Skelly’s Amusements in Williamstown, which decided Sunday not to operate the other rides at the Deerfield Township Harvest Festvial.

Crowds at the Deerfield Township Harvest Festival in Cumberland County mourned the loss of a local fifth-grade girl who was killed after she fell off an amusement ride Saturday night.

“My heart just goes out to the family right now” said Tamica Williams, 29, of Vineland, a mother of three. “They’ll be in our prayers, and everyone’s, I’m sure.”

According to police, the 10-year-old girl was “ejected” from a ride called “Extreme,” which is a Wisdom Super Sizzler amusement park ride, at 6:18 p.m. and sustained serious injuries.

She was airlifted to Cooper University Hospital in Camden where she was later pronounced dead at 7:20 p.m., police said.

The cause and circumstances are under investigation, State Police said.

An email from the Deerfield Township School District was sent to families Sunday expressing “deep and profound sadness” for the “loss of one of our beloved students.” The district asked for the community to “support our students and staff at this most difficult time.”

The section of the festival where the amusement rides and games were set up was restricted Sunday afternoon while officials continued the investigation. A scheduled parade was also canceled.

The festival is located on the grounds of the Rosenhayn Fire Company and Frank LoBiondo Sr. Recreation Park on Morton Avenue in the Rosenhayn section of the township.

The three-day event is an annual tradition for the small township of about 3,000 residents just west of Vineland and north of Millville. The proceeds from the festival, which is in its 41st year and began Friday, benefit the fire department.

Festival organizers read a statement by Deerfield Township over a public-address system at the festival on Sunday before requesting a moment of silence.

“There was an accident at the harvest festival yesterday. The incident is still under investigation,” the statement said. “We have learned from the State Police that the young person involved in the accident has succumbed to her injuries and our thoughts and prayers are with her family...The festival will be open today to offer a place for the community to come together in the wake of this tragedy.”

The rides provided at the festival are from Skelly’s Amusements in Williamstown, according to the festival website.

“Even though we have been given permission to operate the other rides by the state, we don’t have it in our heart,” a post on Skelly’s Amusements’ Facebook page said Sunday. “We thank the sponsors of the Festival for their understanding...We continue to ask for you thoughts and prayers for the family.”

Skelly’s said the company is “fully cooperating with the investigation being conducted by the State Police and the Carnival and Amusement Ride (Safety) unit within the (state) Department of Community Affairs.”

Skelly’s has been providing amusement rides to fairs, carnivals and festivals since 1956, according to the company’s website.

The Super Sizzler is one of several “major rides” the group provides as part of a 25-ride operation.

The ride was permitted and inspected in New Jersey, according to a list on the DCA website that was updated Oct. 7, 2019.

The owner of an amusement ride must register by applying for an annual permit. The annual permit “assures that the ride is inspected annually” and “the owner has met all outstanding violations and has proper insurance for the duration of operation under the annual permit,” according to the Carnival and Amusement Ride Safety unit webpage.

Festivalgoers on Sunday were in shock and mourning.

Williams, the mother from Vineland, said she heard about the accident Sunday morning but decided to bring two of her daughters, 6 and 8, anyway.

“I didn’t want to not bring them,” she said, motioning to the two young girls, “but I definitely had second-thoughts on the way here.”

Alfredo Lopez, 41, of Millville, said he, too, almost reconsidered bringing his 10-year-old son, Robby, to the festival.

“I kept thinking ‘Should we really do this?’ But I believe these (rides) are usually safe,” he said. “But, I think for now, we’re going to try and enjoy ourselves and we’ll wait to go any rides.”

The yellow caution tape and police presence was unnerving for some.

“I don’t know if it’s a good idea that people are here right now,” said Donald Brennan, 67, of Cumberland, as he and his family exited the festival shortly before 2 p.m. “It’s really sad to look over there and know what happened. It made me pretty uncomfortable.”

This is a breaking news story. Check back later for updates.