Members of the Charity League of Atlantic County recently held a Holly Treasure yard sale in Somers Point to raise funds for the organization's designated charities. From left are Chris Fuchs, of Margate; Linda Gemmel, of Linwood; Chris Coulter, of Galloway; and Annamaria Milhous, of Brigantine. 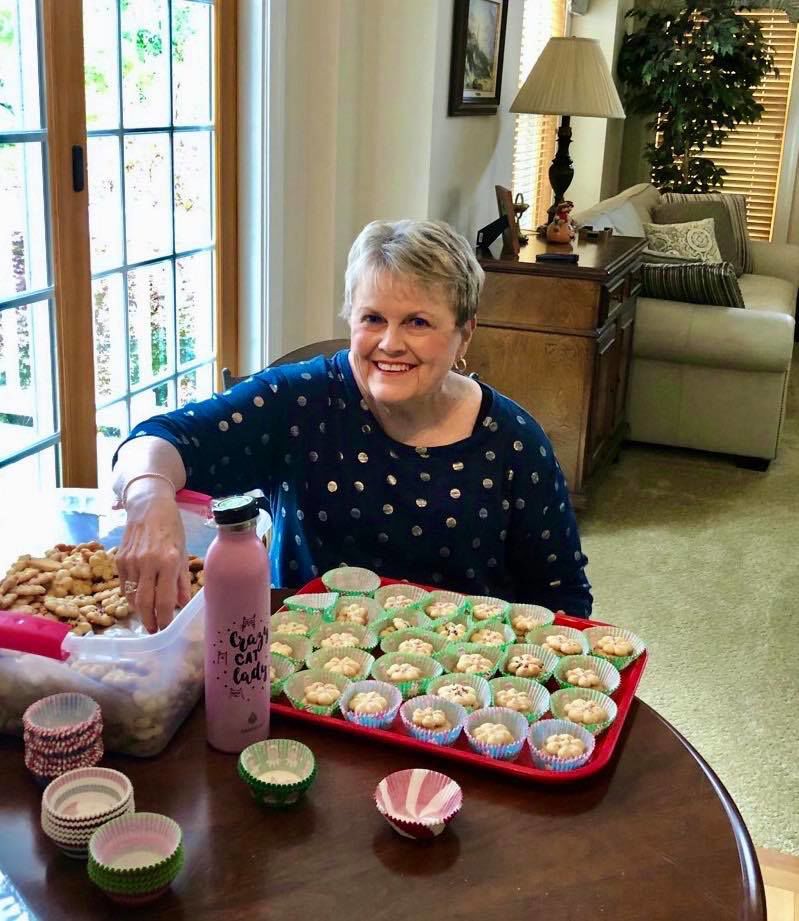 BY SUZANNE MARINO For The Current

SOMERS POINT — In a normal year, members of the Charity League of Atlantic County would have been putting the finishing touches on their highly coveted Christmas pins, tree skirts, stockings and handmade ornaments in advance of their 74th annual Christmas Mart at Greate Bay Country Club. But 2020 hardly resembles a normal year.

The Christmas Mart, with its more than 20 shops, has been cancelled for this year. The theme was to be “dashing through the snow” and the Christmas pin would have dovetailed with the theme. As much as it is a disappointment to not be able to gather for this traditional kickoff to the holiday season, it is also a loss of the group’s largest fundraiser.

“We were able to raise more than $130,000 from the Mart in 2019. Those funds went directly to support our five designated charities,” said Charity League President Judy Dale of Egg Harbor Township. “Atlantic City Day Nursery, The Donny Fund, Covenant House, Avanzar and the Center for Family Services are wonderful organizations that help women and children in Atlantic County. They count on Charity League’s financial help each year.”

One of the things they have managed to carry forward all these years is their artisan spirit. Each of the members of Charity League signs on knowing that she will be asked to contribute 200 hours of volunteer time during the year. Much of those hours are spent sewing the sequined Christmas pins and baking the delicious tea breads and cakes for the gourmet booth at the Christmas Mart.

The Charity League Christmas pin would have been one of the best kept secrets in Atlantic County, with its design under wraps until the opening day of the Christmas Mart, when it would be revealed. The 2020 pin has already been unveiled and it is an adorable deep green sequined sleigh carrying two delicate Christmas trees home for the holidays. It is trimmed in white and includes delicate seed beads and crystals and is highlighted with crystal holly leaves and berry. Each pin is handmade and skillfully sewn by members and friends and takes about two hours to complete.

While there will be no lemon tea bread or cranberry walnut bread or any of the other 20 or so mouth-watering varieties to bring home this season, there is still a Christmas pin. Dale said her members have worked so hard this year in particular to make 5,200 pins. “Normally, small groups will gather and enjoy friendship and camaraderie while they sew pins. This year, everyone made their pins at home. Meetings have been strictly on Zoom, but we are making it work,” said Dale. “We all are looking forward to next year when we hope we will be able to gather together once again.”

Nearly 4,000 of the pins were purchased at last years Christmas Mart sight unseen. They have become collectors’ items and make wonderful gifts. “I think people really appreciate the detail and amount of craftsmanship that goes into each pin,” said Charity League member Barbara Law, of Longport. The remaining pins are now available for sale for $25 each.

Charity League members are doing their best to adapt to what 2020 has brought with it and still find a way to continue to support their designated charities. Several weeks ago, they took items new and gently used that are normally part of the Holly Treasure table at the Christmas Mart and held a yard sale in Somers Point and raised nearly $1,900 according to Dale.

The next opportunity for friends of Charity League to support the organization is through the Boscov’s annual Friends Helping Friends sale. On Oct. 14 and 15, shoppers at Boscov’s will be able to make a purchase and indicate at the checkout what charity would like their sale to benefit. Charity League is one of the registered charities.

Look for Charity League on Facebook where you can check out their blog. To purchase a 2020 Charity League Christmas pin, email charityleaguepins@gmail.com or call 609-432-6822.

I caught up with Chuck Westcott, president of the Somers Point Business Association. Westcott and the SPBA are working through the new normal …

LINWOOD — Linwood Farmers Market returned to Central Square each Saturday through Oct. 31. While social distancing due to COVID-19 has changed…

Members of the Charity League of Atlantic County recently held a Holly Treasure yard sale in Somers Point to raise funds for the organization's designated charities. From left are Chris Fuchs, of Margate; Linda Gemmel, of Linwood; Chris Coulter, of Galloway; and Annamaria Milhous, of Brigantine.