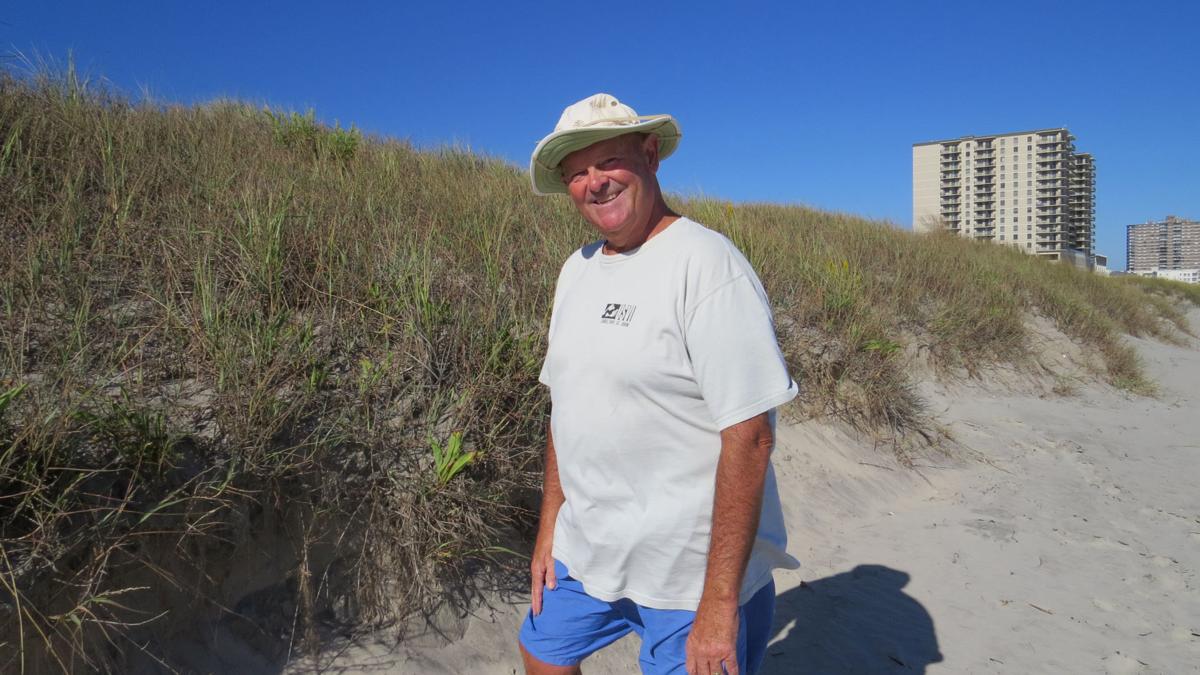 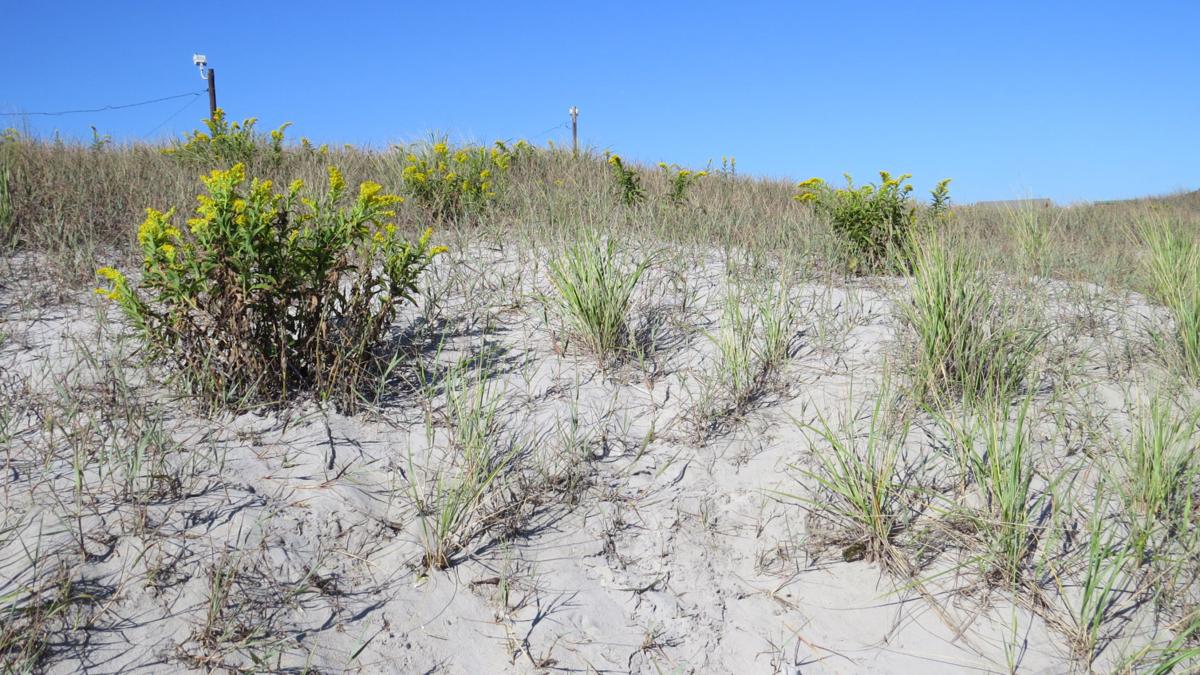 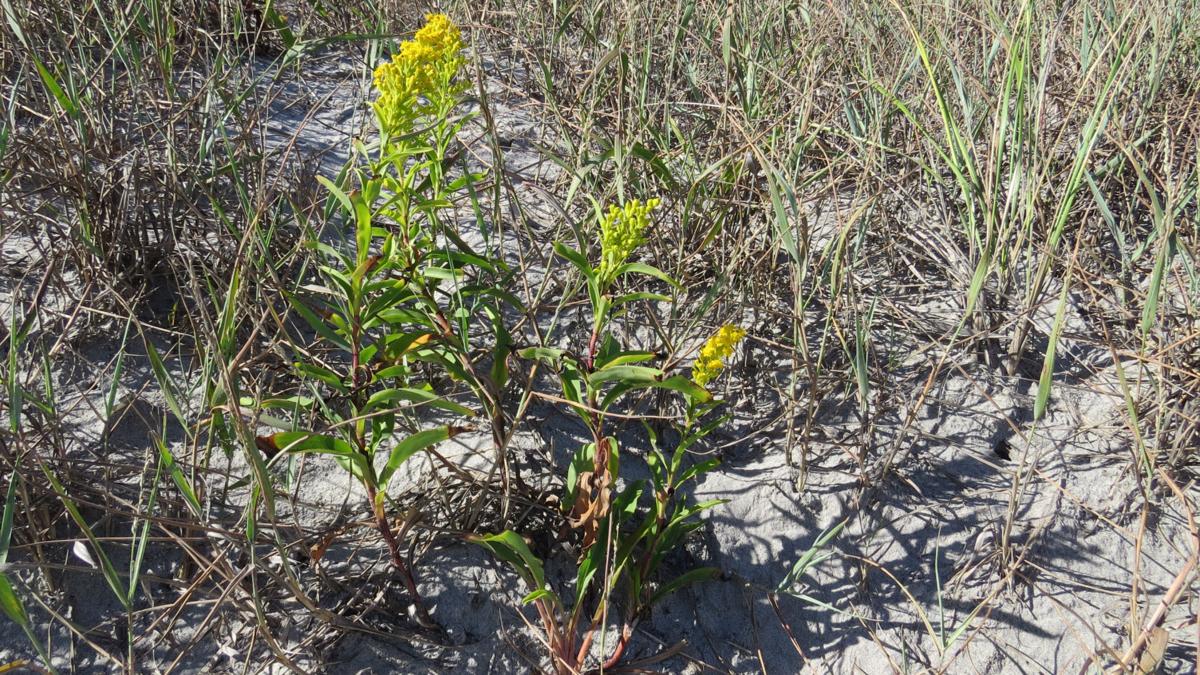 The new dune that will be built in Longport will abut the old dune system near the Margate border. 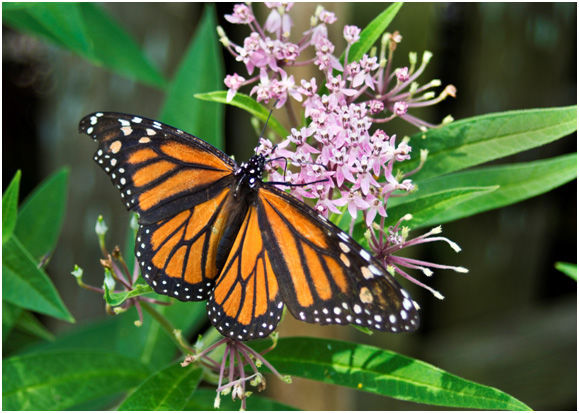 LONGPORT — A local resident has expressed concerns about the effect the pending dune project will have on the migration of monarch butterflies to the mountains outside Mexico City.

Doug Farrell said the destruction of established dunes between 32nd and 36th avenues to make way for a new dune would destroy the plants that provide food for the hungry monarchs traveling to tropical climes from early September to late October. Farrell said there is an abundance of goldenrod on the dunes where the monarchs feed at this time of year.

“They are all over the goldenrod bushes gaining strength for their long trip to Mexico,” he said Oct. 4.

“Ceasing to destroy the older dunes and preserving the life of the milkweed and the needed habitat for the monarchs should be of primary importance,” Farrell wrote in an email to a representative of Conserve Wildlife NJ.

He is seeking more information from the organization about how to stop destruction of the habitat by the state Department of Environmental Protection and U.S. Army Corps of Engineers dune project, which is scheduled to start in Longport sometime this fall.

Farrell said he does not care that the dune will be built, but destroying all of the vegetation on the old dune is unacceptable.

In June, the DEP published a comprehensive guide on how to protect and grow the declining monarch butterfly population. In a press release about the guide’s release, the DEP cited reasons for the decline of the monarch population, including loss of plants on which to feed.

Farrell said he is willing to protest the dune project, which has been widely acceptable to most Longport residents, to preserve the old dune and protect wildlife. However, his protest might be short-lived.

Farrell, a retired dentist, is a summer resident of Longport who swims the ocean nearly every day for exercise and good health.

“I love the ocean. I love Longport. And I don’t want to see them destroy the old dunes,” he said.

“Rumor has it they will tear them down,” Yarmouth Avenue resident Peter Finnegan said when he questioned commissioners at the Aug. 23 Borough Commission meeting about the Army Corps’ plans for the dunes.

Engineer Richard Carter said that during plan review discussions, the Army Corps agreed the old dunes would be incorporated into the new dune.

A property owner who lives between 32nd and 33rd avenues has asked that the old dune in front of his home be left alone, which the Army Corps agreed to, Carter said.

Because the two dunes will be merged into one wider dune, “we will have more protection,” Agnellini said. “It’s the quantity of sand in the cross-section that will protect against storms.”

Carter said he met with the state and Army Corps on Oct. 3 to review construction surveys.

At a subsequent weekly construction meeting Thursday, Carter was advised that “the Corps will not be touching nearly all of the existing dunes except for possibly placing sand on the waterward side to establish a straight and uniform dune line,” he said.

“They (Army Corps) will not be touching the top of the dune at this time,” Carter said.

He said the commissioners will have to decide whether they want to file a permit with the DEP to have the old dunes lowered. The issue will likely be discussed at the next workshop meeting 9 a.m. Thursday, Oct. 12.

“Goldenrod will also come in and grow on its own,” he said. “Goldenrod is a species commonly used by monarchs during the fall migration. The sand placement will be completed this winter, and the dune will be planted by mid-March. The dune vegetation should be well established by next fall's migration.”

The Longport Board of Education regular meeting originally scheduled for 5 p.m. Thursday, Oct. 19, has been changed to 5 p.m. Wednesday, Oct. …

Ventnor Elementary School Students of the Month for September

Ventnor Elementary School Principal Carmela Somershoe announced students of the month for September. The theme for the month was respect.

MARGATE — After three hurricanes temporarily halted the dune building project on Absecon Island, the dredge Lindholm has returned to the area …

NORTH WILDWOOD — After a very public fight over the construction of dunes in the downbeach part of Absecon Island, the Army Corps of Engineers is turning its attention south, planning a major dune project that will help protect eroding beaches in North Wildwood with sand from Wildwood and Wildwood Crest.

MARGATE – After months of negotiations with the state Department of Environmental Protection, the city commissioners approved a local cooperat…

LONGPORT — The Absecon Island Storm Damage Reduction project started in the borough last week in the area of 29th, Manor and Pelham avenues an…

The new dune that will be built in Longport will abut the old dune system near the Margate border.