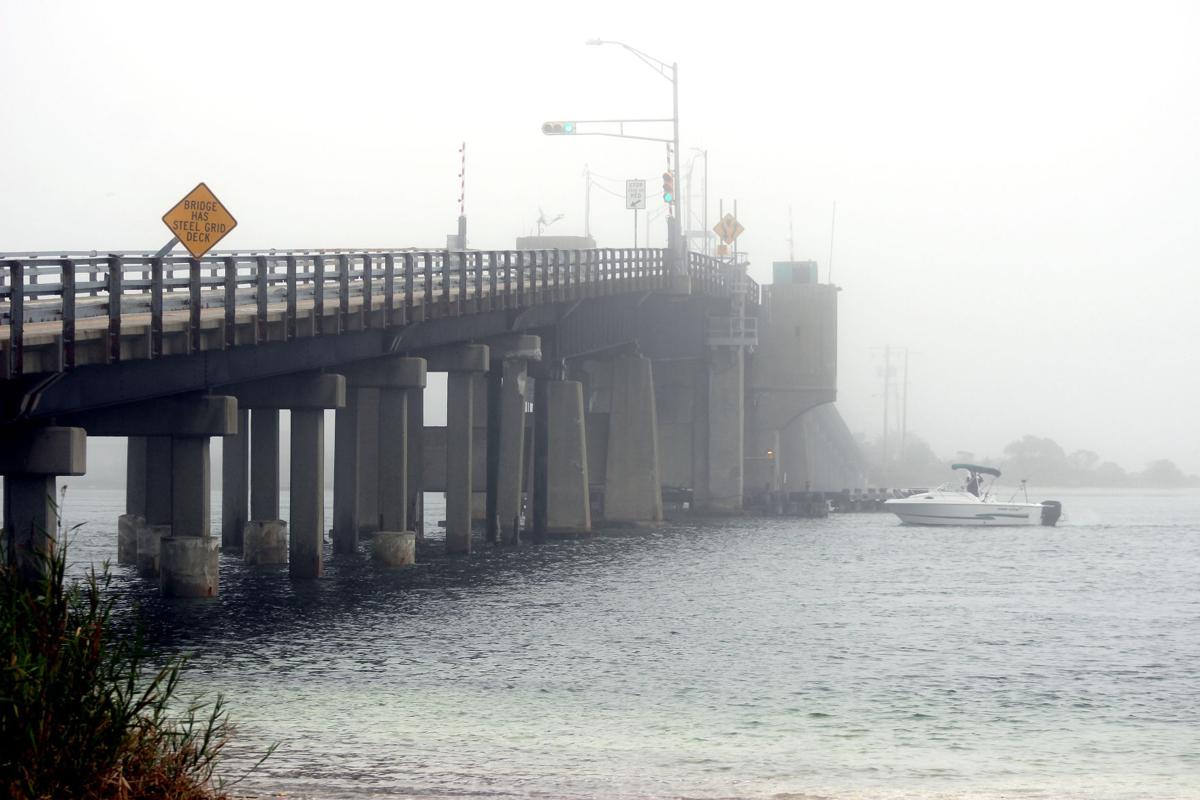 A boat passes under the Middle Thorofare Bridge leading from Lower Township toward Wildwood Crest. The county Bridge Commission would like to replace the bridge, but would have to find federal money to make that happen. 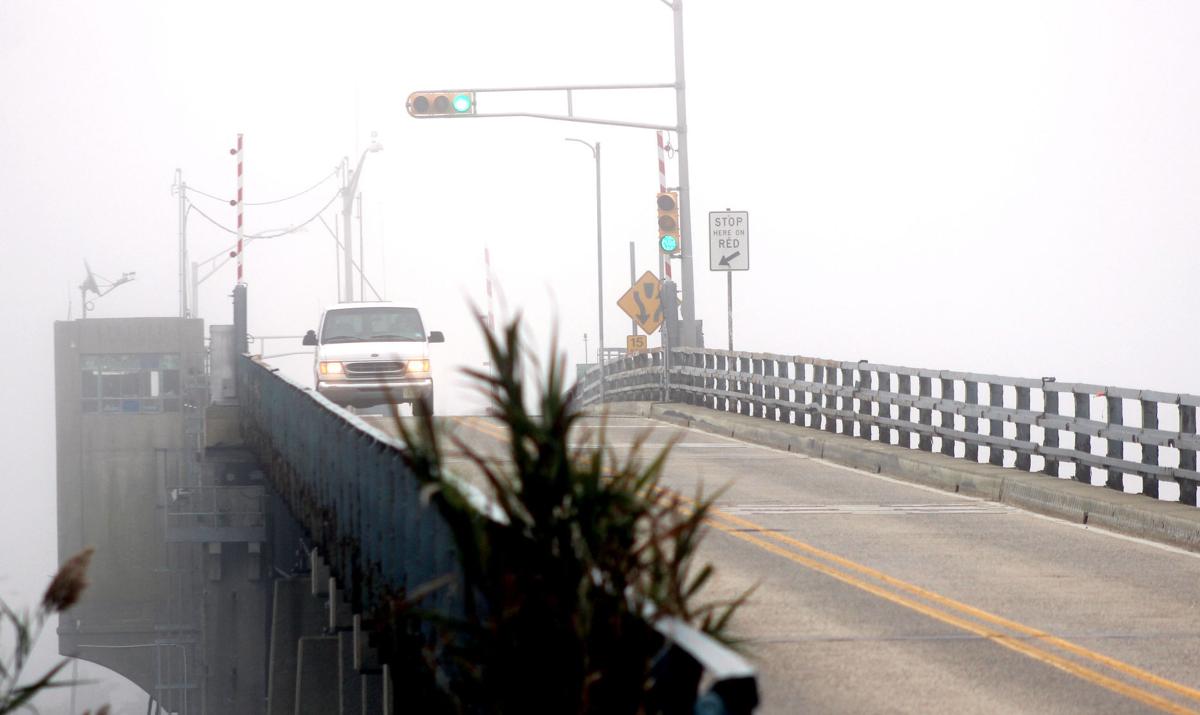 A truck passes over Middle Thorofare Bridge, heading toward the Garden State Parkway. Built with New Deal funding, the bridge offers a challenge to boat captains and to the engineers trying to keep its weight limit up. 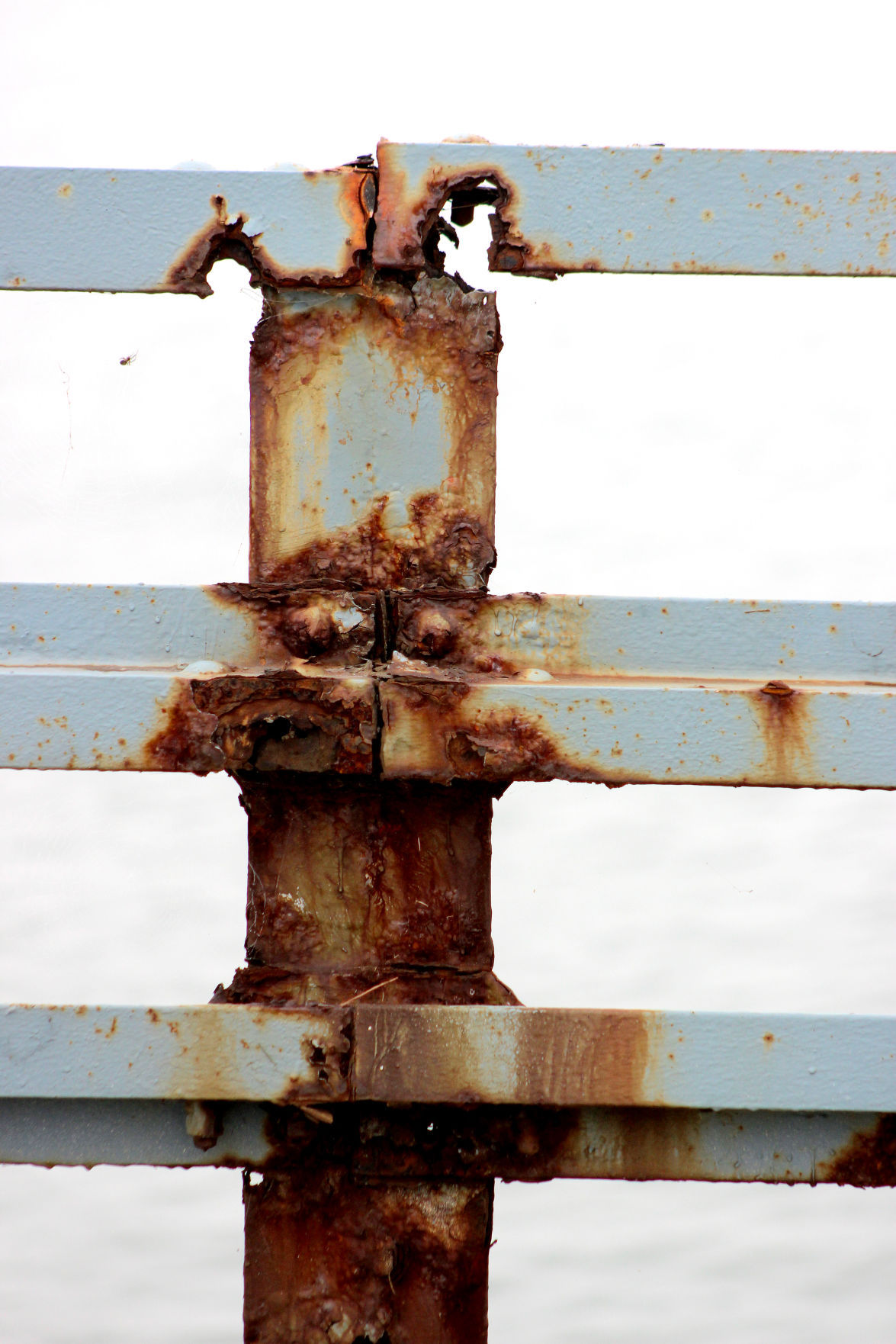 Corrosion is visible on a guard rail on Middle Thorofare Bridge.

A boat passes under the Middle Thorofare Bridge leading from Lower Township toward Wildwood Crest. The county Bridge Commission would like to replace the bridge, but would have to find federal money to make that happen.

A truck passes over Middle Thorofare Bridge, heading toward the Garden State Parkway. Built with New Deal funding, the bridge offers a challenge to boat captains and to the engineers trying to keep its weight limit up.

Corrosion is visible on a guard rail on Middle Thorofare Bridge.

LOWER TOWNSHIP — The captains of the big fishing trawlers heading out to the Atlantic from Lund’s and other fisheries face their first challenge almost immediately: passing under the drawbridge spanning Middle Thorofare.

The channel has a 50-foot opening from upright to upright. The largest fishing vessels are about 145 feet long and 38 feet wide, leaving little room for error.

“They’re getting banged up on anything other than a slack tide,” said Dale Foster, Cape May County’s engineer, in a recent interview, referring to when the tide is either all the way in or all the way out, and the water is still. Interviewed this month, Foster said a trawler crashed into the bridge in August, taking a good sized chunk out of a bridge section. The morning of the interview, he said, a sailboat had hit the bridge, but he said they were still looking for some sign of damage from that accident.

Wayne Reichle, the vice president at Lund’s Fishery near the bridge, said the captains heading in to his fishery, or others including Atlantic Cape, Dock Street Seafood and independent operators in Wildwood either wait for slack water or the full high tide before asking for a drawbridge opening.

According to Foster, those openings delay traffic, particularly in the summer. The drawbridge itself requires maintenance, and the county is also working to keep the bridge’s weight limit at the current 15 tons. That’s too low to allow fire trucks over the bridge, which must detour to the George Redding Bridge heading through Wildwood to reach Diamond Beach or Wildwood Crest for mutual aid emergencies, but it’s enough for cars and delivery trucks like those from UPS or Fed–Ex to use the bridge, according to Foster.

What he’d like to see is a fixed-span concrete bridge instead. But to get there, he has to thread a needle of his own, finding a way to balance environmental and historic concerns and gain support for a project at the local, county, state and federal levels.

And then there’s the money. The money’s a big deal.

The southernmost of the five Ocean Drive bridges, the one over Middle Thorofare was the first to be built by the Cape May County Bridge Commission, which was founded in 1934 to find a way to build bridges connecting the growing barrier island communities without bankrupting the county. A $1.6 million federal package of New Deal money got things rolling, funding Middle Thorofare, the Grassy Sound bridge connecting North Wildwood and Stone Harbor, and Townsend Inlet bridge between Avalon and Sea Isle City, along with some smaller bridges, according to the bridge commission’s website.

These days, $1.6 million is barely enough to paint one of the bridges.

Later, in 1946, the toll bridge at Strathemere was built, for $3.4 million, and around the same time, the commission bought an existing privately owned bridge connecting the Gardens section of Ocean City to Atlantic County.

The commission still maintains and operates the bridges and collects the tolls, but over the years, county officials have said those tolls are barely enough to cover maintenance. When it comes time for a new bridge, that toll money doesn’t even come close.

The commission’s 2015 financial report showed $2.75 million in toll revenue, including $864,872 from the Middle Thorofare Bridge, with more than 600,000 cars using it one way that year. But the same report put operating expenses for the independent public agency at $3.2 million, with personnel costs taking up the largest portion.

The last time one of Cape May County’s toll bridges was replaced it was the Ocean City-Longport bridge, which reopened in 2002 and came in at $50 million, with funds cobbled together from federal, state and local money; mostly federal. The commission put in $2.8 million, according to its website.

In previous interviews, Foster put replacing the Middle Thorofare high up on his priorities, and said the commission would need help to fund work there. But if help is on the way, it seems to be taking its time.

“Not much is happening,” Foster said. “The federal funding went away for that bridge.”

He said Washington had earmarked $1.6 million for the bridge, but as he put it, “in the new spending bill, the feds absconded with it.”

Part of the reason is an end to earmarks in the House of Representatives, starting in 2010, in an effort to reform federal spending. But Jason Galanes, a spokesman for U.S. Rep. Frank LoBiondo, said in this instance, it has more to do with the state’s priorities.

Galanes said there could be federal money available for a new bridge, but the state has to want it. He said the Federal Highway Administration had money for the bridge, but there was a request to repurpose it from the New Jersey Department of Transportation.

The House approved a highway bill this year, he said, so it will likely be a couple more years before the next one. But he said it would be possible to seek federal funding for a new project.

“The state first and foremost has to identify that as a top priority project,” Galanes said. “Otherwise, no federal money can go toward it.”

No one from Gov. Chris Christie’s office was immediately available for comment. Kevin Israel, a spokesperson for the state Department of Transportation, said $1.2 million in federal money was moved to a county resurfacing project of Route 626.

Issues on top of issues

On a misty fall morning, a few cars travel over the bridge, heading from the southern end of the Garden State Parkway to the Diamond Beach section of Lower Township or adjacent Wildwood Crest. An incoming tide flows under the bridge, so no commercial fishing boats are heading out the channel toward Cape May Inlet and the open ocean.

The bridge looks solid enough, although corrosion can be seen on the steel portions, including on the guard rails. Foster, or any engineer, will be happy to tell you that steel and salt air don’t mix well.

“Any bridge we build is going to be concrete,” Foster said. That’s what went in over the Great Egg Harbor Inlet in Ocean City’s northend, built high enough that almost any boat can pass underneath. Epoxy coated rebar or even stainless steel rebar could further protect a new concrete bridge from corrosion, he said.

In the meantime, Foster said, the steel on the bridge deck, rails and elsewhere faces constant corrosion. Supplemental steel has been put in place to maintain the strength of the bridge and keep the weight rating up, but Foster said the original bridge from more than 70 years ago was only designed for 17.5 tons in the first place.

He said he had a design under way for a new bridge, but that design included the use of private land near the former Coast Guard LORAN station in the far south end of Five Mile Island.

Any new bridge design includes looking at environmental impact, but according to Foster, on the Diamond Beach side of the bridge a lot of the land has environmental restrictions, creating obstacles both in terms of design and construction.

Further, historic preservation also plays a part. Foster said the Department of Transportation will be interested in the bridge’s structure. At this point, the bridge is considered historic. However, the similar bridges at Grassy Sound or over Great Channel heading into Stone Harbor would remain in operation indefinitely. Foster said the county would be able to maintain the historic appearance of those bridges if a new bridge is ultimately approved for Middle Thorofare.

WILDWOOD CREST – Members of the public argued against proposed striping on Pacific Avenue, which professionals said would increase safety and …