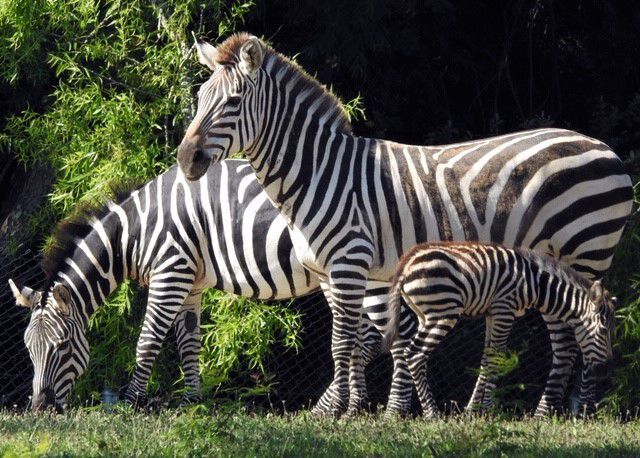 CAPE MAY COURT HOUSE — There is a new addition at the Cape May County Zoo that has the staff and visitors very excited.

Veterinarians and zookeeper kept their distance and a watchful eye on the foal and mother, and both have been healthy and doing well.

The zoo is home to three resident zebras in the Savannah section that roam the zebra yard freely during the day. Ziggy and her foal are already out and about and visitors are welcome to catch a glimpse of them as the foal gets acclimated to her new environment. Foals can run within an hour of birth.

While the veterinarians knew Greta was expecting, they were watching for the delivery. Gestation is about one year, between 345 and 390 days. Nearly 50% of wild calves are lost due to predation.

"After the past few months, dealing with the impact of COVID-19 and the closing of the parks and zoo, it's a great pleasure to deliver some good news and announce the arrival of the zebra foal," said Freeholder E. Marie Hayes, liaison with the parks and zoo.

Zebras are not considered endangered. They have no major threats, but habitat loss and over hunting have led to localized declines. While not specifically protected, they are common in many national parks such as Kruger National Park, which is protected.

"The zoo staff is planning to conduct a naming contest, and the public will be encouraged to enter and help name the new addition. I encourage residents and visitors alike to come out and enjoy the parks and zoo and meet our new arrival. The Cape May County Zoo is one of the biggest attractions that appeal to visitors of all ages. Our zoo staff is doing a tremendous job caring for the animals and grounds. Our award-winning zoo is AZA and ZAA accredited and well known throughout the state and beyond," Hayes said.

The Cape May County Zoo is open 10 a.m. to 4:30 p.m. daily during the summer months. The park is open from 7 a.m. until dusk. The park and zoo are free. Donations are accepted and greatly appreciated. For the protection of staff, guest and animals, masks or face coverings are required at the zoo for visitors over the age of two.

• Habitat and range: Grasslands and woodlands of east and southeast Africa.

• Captive/wild lifespan: Captive around 40 years, wild up to 20 years

• Adaptations: With only two seasons, wet and dry, zebras migrate with the waters to find food. Each yearly migration can be over 700 miles. Stripes are what makes this animal so recognizable, and they also tend to be the topic of debate among scientists. There are a lot of theories floating around as to the purpose of the stripes, some including a type of camouflage and others that deter bugs. Some Scientists believe the stripes confuse predators because they can't determine one individual from the next, while others believe and have even done studies that the stripes deter biting insects because the stripes disrupt the attractive pattern to insects.

• Did you know: There are 3 different species of zebra (Plains, Grevy's, and Mountain), and the main difference is in the stripes. Each species develops their stripes at different weeks in their embryonic development, which results in wider or smaller stripes in the animal.