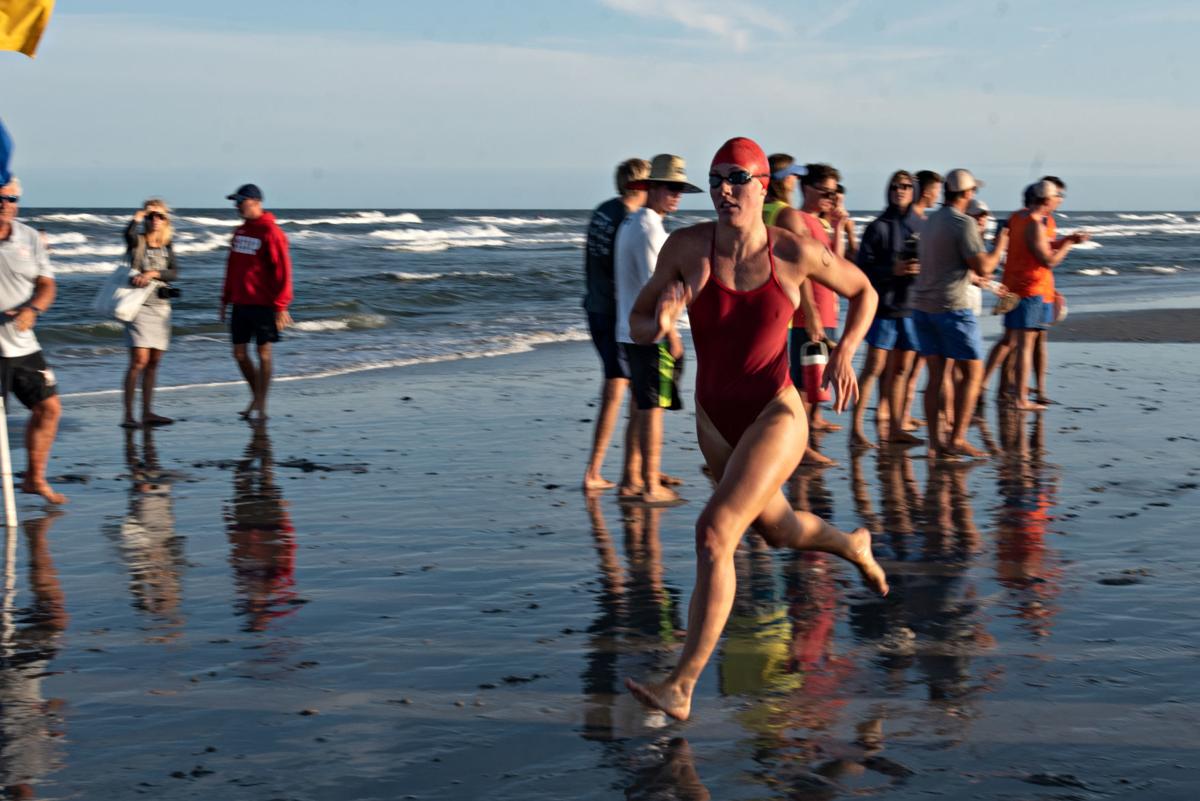 Cape May Beach Patrol’s Rebecca Luft competes in the box swim at the 2019 Cape May County Lifeguard Championships. 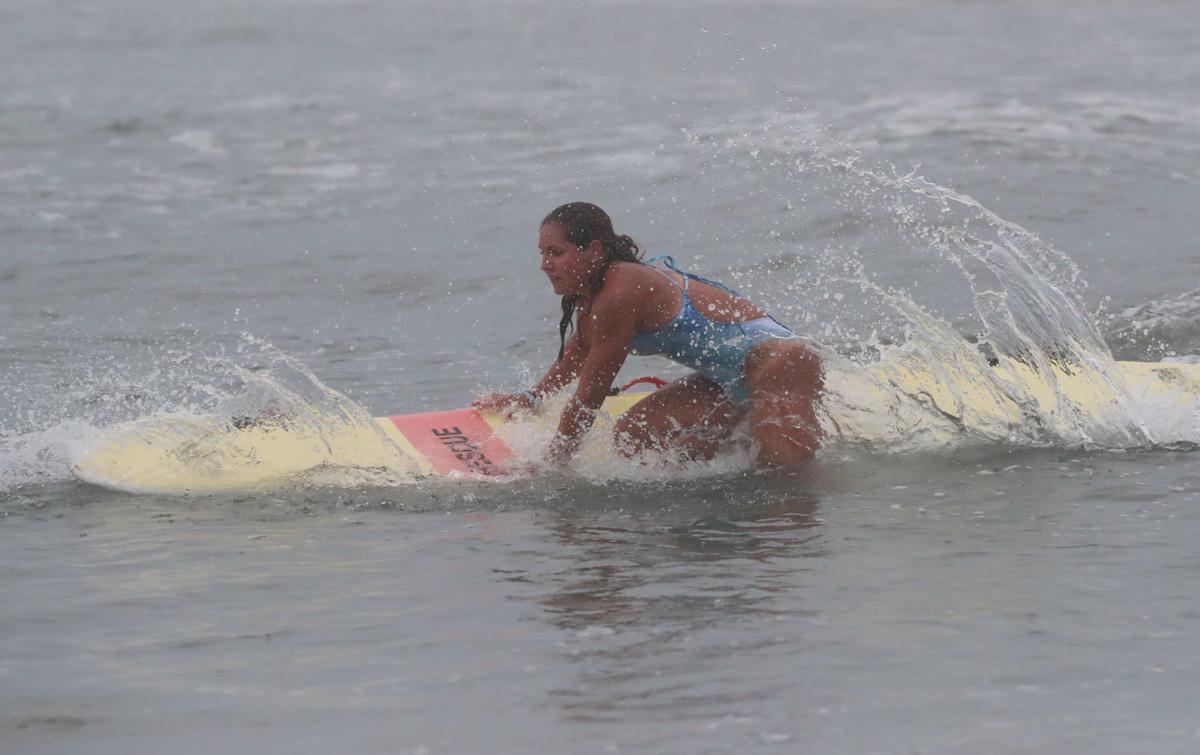 Edward Lea, staff photographer Katie Collins competes in the Tri-Resorts Lifeguard Championships in 2019. Collins was the women’s winner of the Superathlon in 2021, the first year women were able to compete.

Katie Collins, 28, of Philadelphia, on Monday night won the female division of the Cape May Beach Patrol SuperAthalon. It was the first time the event included a women’s division. Collins is a lieutenant with the Wildwood Beach Patrol.

By DAVID WEINBERG For The Current

No one would have blamed Rebecca Luft if she had given up during the recent Cape May SuperAthalon.

A strong, surging current had swept her and most of the other competitors past the turnaround buoy during the quarter-mile ocean swim leg of the event before they could maneuver around it. As a result, the Cape May Beach Patrol lifeguard had spent 15 minutes essentially swimming in place while trying to backtrack to get around the marker.

Several rivals opted to swim to shore and call it a day. They were exhausted, having already completed a 2.3-mile run and 1.5-mile row.

Luft, 23, and two other women’s competitors opted to re-enter the water and attempt the swim again while the crowd cheered.

Luft got around the buoy on her next try and wound up finishing second in the women’s division behind Wildwood’s Katie Collins in one hour, 17 minutes, two seconds. Avalon’s Sarah Powell also did the swim twice and placed third in 1:27:39.

Luft collapsed in the sand after crossing the finish line, her head buried in her knees, before some fellow lifeguards helped her up.

“I was so tired,” said Luft, a former swimmer at Ohio State University. “But there was no way I wasn’t going to finish. This is my race. I’m the reason this race even happened because I pushed for (organizers) to add a women’s division. I had to do it.”

Collins, a former swimmer at Temple University, was behind Luft, Powell and four other women’s competitors after the row and thought she had no shot at victory.

But one by one, her rivals got swept past the buoy while she managed to stay the course. The 28-year-old lieutenant on the Wildwood Beach Patrol finished in 1:06:16, thus becoming the first women’s champion in the 39-year history of the race.

“Once I got past the rock pile (at the start of the swim), I actually swam perpendicular and away from the buoy and hoped that the current would carry me,” Collins said. “I hit it with my side and had to wedge my way around it. But I still can’t believe I won. I had no idea. There was no one around me, so I actually thought I was dead last.”

Cape May’s Rob Moran, who won the event for the fourth time in five years, was in second place after the 2.3-mile run and 1.5 mile row. Two-time champion Timothy Schwegman of Longport owned about a 50-yard lead at the start of the .25-mile out and back ocean swim.

Schwegman was swept past the buoy at the halfway point before he could round it, however, and was unable to backtrack. Moran successfully rounded it, exited the ocean about 100 yards up the beach, and finished in 47:43.

“This year’s race was the hardest one for me, personally,” said Moran, who celebrated by hugging his wife Stephanie and their 8-month-old son Matthew. “I almost missed the buoy, too. I actually had to grab hold of it and pull myself around it.”

Of the 14 male competitors who started the race, only three were able to make it around the buoy, according to race officials. Wildwood’s Pat Clemens took second place in 48:30, followed by Stone Harbor’s Jack Levari in 51:35.

Levari, a Vineland native, is a 2021 St. Augustine Prep graduate who is headed to Virginia Tech on a swimming scholarship. He was making his SuperAthalon debut.

“I almost missed the buoy like everyone else,” Levari said. “I felt like I was floating on a mat down a lazy river. I was getting carried by the current and there was only a small window (of opportunity) for me to get around it and I barely made it.”

With his third straight victory, Moran tied Wildwood Crest legend Bic Murphy, an eight-time champion, for the most consecutive wins in the event.

The loudest cheers, however, were reserved for Luft and Powell, who were determined to finish the race, even if it meant going against the tide in more ways than one.

(David Weinberg’s columns can also be found on his Dave Weinberg Extra Points Facebook page and blog, as well as on 973ESPN.com. His podcast, Dave Weinberg’s Tequila and Touchdowns, can be heard on Anchor, Facebook and Twitter. You can also hear him 5:10 p.m. every Monday at Newstalk 1400-AM WOND and WONDRadio.com on Off the Press with Scott Cronick. His Weinberg Wednesday segment airs at 6:15 p.m. weekly on 97.3-FM ESPN.)

Cancer survivors 'blessed' for chance to row around Cape May

As soon as he heard a doubles row was being added to the DeSatnick Foundation's annual Around the Cape Paddle event, Cape May Beach Patrol vet…

Cape May Beach Patrol’s Rebecca Luft competes in the box swim at the 2019 Cape May County Lifeguard Championships.

Edward Lea, staff photographer Katie Collins competes in the Tri-Resorts Lifeguard Championships in 2019. Collins was the women’s winner of the Superathlon in 2021, the first year women were able to compete.

Katie Collins, 28, of Philadelphia, on Monday night won the female division of the Cape May Beach Patrol SuperAthalon. It was the first time the event included a women’s division. Collins is a lieutenant with the Wildwood Beach Patrol.