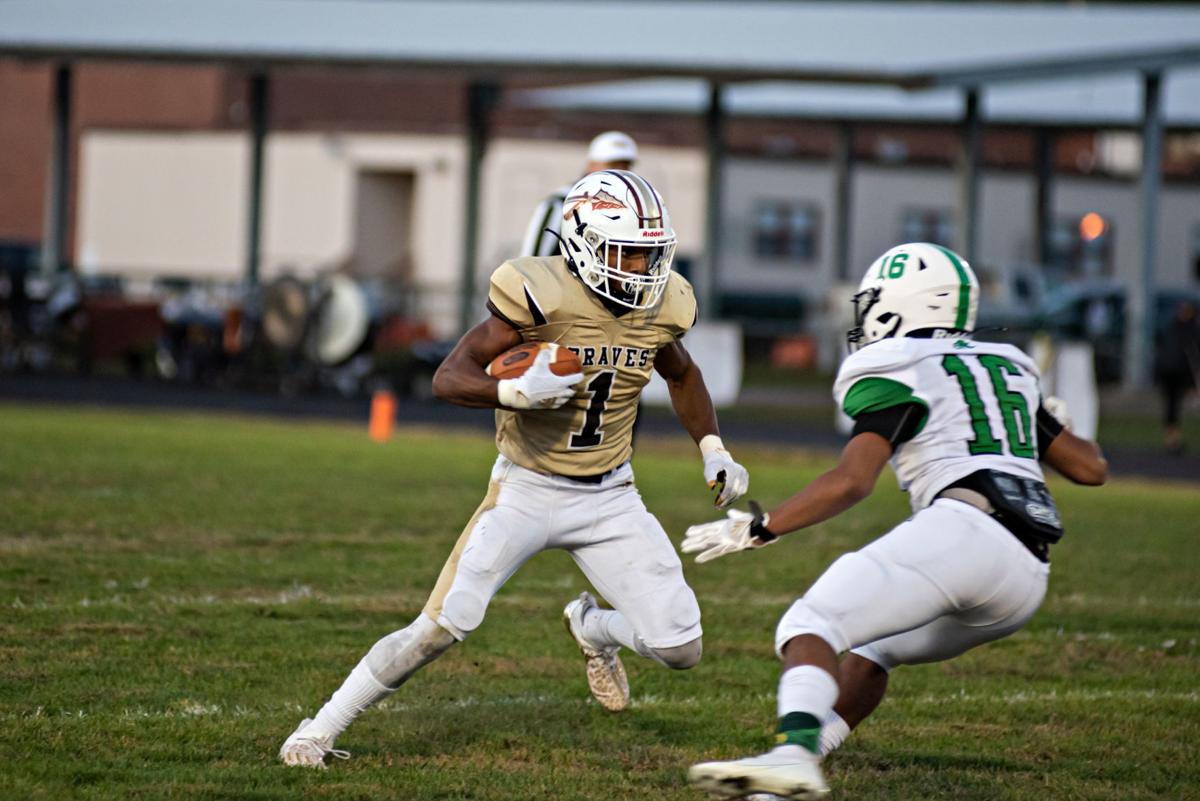 Absegami senior wide receiver Jordan Marcucci tries to get past Mainland Regional’s Julian Rivera during the Friday, Oct. 9, game in Galloway Township. Marcucci scored two TDs in the Braves’ 28-13 win over the Mustangs. 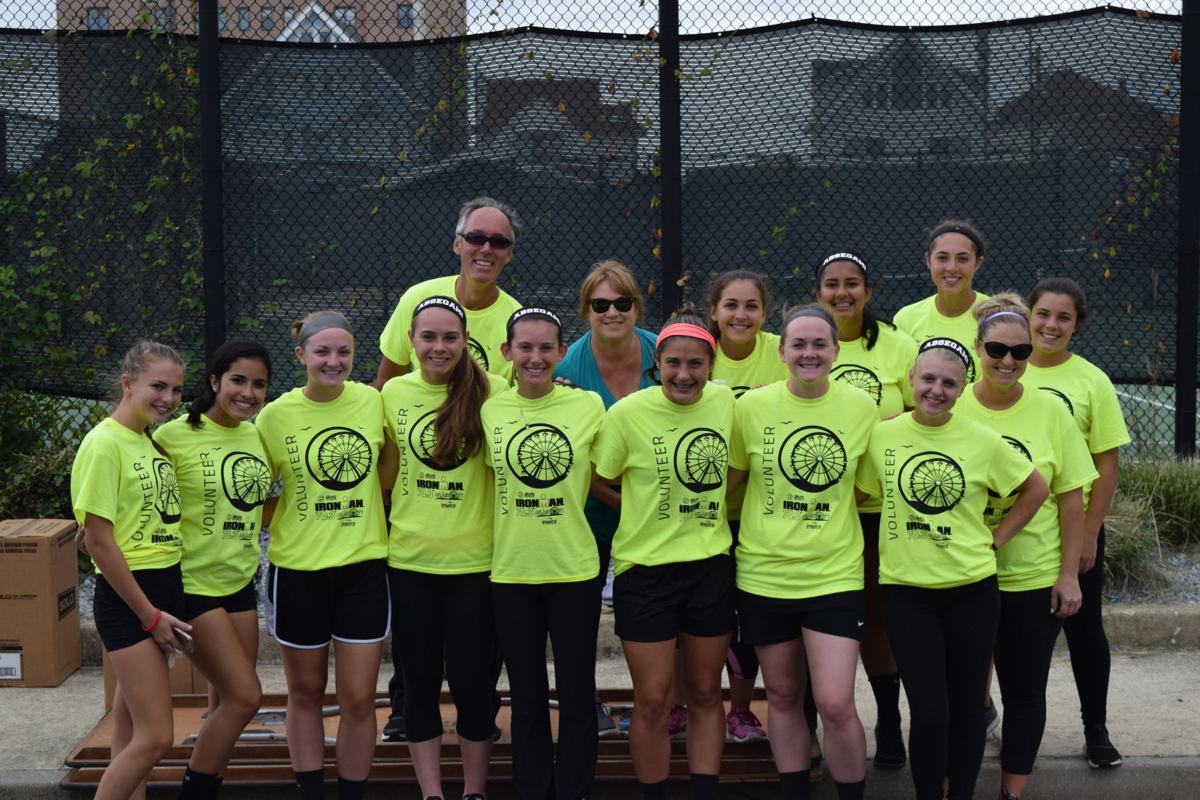 JOHN O'KANE For The Current

Each week, we will preview some of the top high school games from around the area in different sports. Here are just a few of the games to watch from the Cape-Atlantic League.

The intradistrict rivals square off in a game that has historically been played on Thanksgiving. Absegami’s Jordan Marcucci has emerged as one of the top playmakers in South Jersey. Marcucci had 96 yards receiving and two touchdowns in a 41-6 win against Middle Township last week. Marcucci also returned a kickoff and a punt for touchdowns. Marcucci has four touchdown catches to go along with two punt return and two kickoff return touchdowns. Absegami quarterback Ray Weed completed 6 of 9 passes for 172 yards and three touchdowns against Middle. The Braves have won three straight games after a season-opening loss to Ocean City. Oakcrest’s Nissim Respes led the way in a 35-28 loss to Lower Cape May Regional last week. Respes threw for 147 yards and three touchdowns and added 63 yards rushing. The Falcons are looking for their first win of the season.

Cedar Creek’s Frank Hoffman had a huge game in his team’s 42-7 win against Buena Regional last week. Hoffman finished with 260 yards and two touchdowns on 14 carries. Creek quarterback Dylan Simpson completed 7 of 14 passes for 161 yards and two touchdowns. The Pirates will have their hands full this week against St. Joseph, the No. 7 team in The Press’ Elite 11. Ahmad Ross ran for 115 yards and a touchdown last week in a win against Vineland and also had five tackles and an interception. Ross is committed to Army.

Two of the most storied programs in South Jersey soccer history meet in a rivalry game on Tuesday in Richland. John Lindsay scored twice in Ocean City’s 3-0 win against Lower Cape May Regional on Oct. 22. The Hermits won in dramatic fashion on Saturday, Oct. 25, as Mike Balestriere scored the only goal in a 1-0 win against Egg Harbor Township with just 23 seconds left in the game. Matt Liss had the assist on Balestriere’s goal. Ocean City has one of the area’s top attacks with 36 goals scored this season, while the Prep features one of the stingiest defenses with just two goals allowed this season.

This game is a rematch from a 3-2 Cedar Creek win on Oct. 10. Rourke Watson had a goal and an assist to lead the Pirates in the first meeting. Kavan Houck and Lorenzo Fortunato also scored. Creek goalkeeper Austin Alcantara had six saves in the win. The Pirates have a well balanced attack as 15 different players have scored goals this season. George Nomah and Axel Mayren each scored for ACIT in the first meeting.

Two of the area’s top girls soccer teams meet for the second time this season. Absegami earned a 1-0 win in the first meeting Oct. 10 as Gianna Baldino scored the only goal of the game. Rebecca Silipena had three saves for the shutout, one of three this season for the Absegami goalie. Absegami has one of the top defensive units in the area with only two goals allowed this season. The Braves have won four games in a row with three of the four wins coming by one goal. Hammonton goalkeeper Emma Peretti had 12 saves in the first meeting of the teams.

This is the second meeting of the season between the Eagles and the Spartans. Nikki Danz scored three goals as Egg Harbor Township beat Spirit 6-1 in the first meeting Oct. 10, but the Spartans will look to close the gap this time around. Danz is one of the top scorers in South Jersey with 13 goals this season. Madison Morgan and Gabriella Piantadosi each had two assists. Hailey Mastro scored the lone goal for Spirit. Mastro and Taylor Magill (seven goals) lead the Spartans offensively.

The Braves and Falcons meet for the second time this season following a 4-1 Absegami win Oct. 14. Absegami’s Makayla Edwards had two goals and an assist in the first meeting between the intradistrict rivals. Amber Conway had a goal and an assist and Livia Pino and Kathleen Walls also scored. Absegami goalie Kayla Ospina had three saves. Katie Haye scored the only goal of the game for Oakcrest off an assist from Arianna Miranda.

Two of the top programs in the state meet in a nonconference showdown. Ocean City is No. 8 in The Press’ Elite 11. The Red Raiders come into the game after a big 1-0 win against Middle Township on Oct. 22. Nya Gilchrist scored the only goal of the game on an assist from Tara McNally. Nora Brideford had three saves in the shutout. As good as Ocean City is the Red Raiders will be tested in this one as Shore is one of the top 10 teams in the state. The Blue Devils haven’t allowed a single goal this season and have outscored their last five opponents by a combined score of 45-0. The teams met last season with Shore winning 1-0.

Absegami senior wide receiver Jordan Marcucci tries to get past Mainland Regional’s Julian Rivera during the Friday, Oct. 9, game in Galloway Township. Marcucci scored two TDs in the Braves’ 28-13 win over the Mustangs.