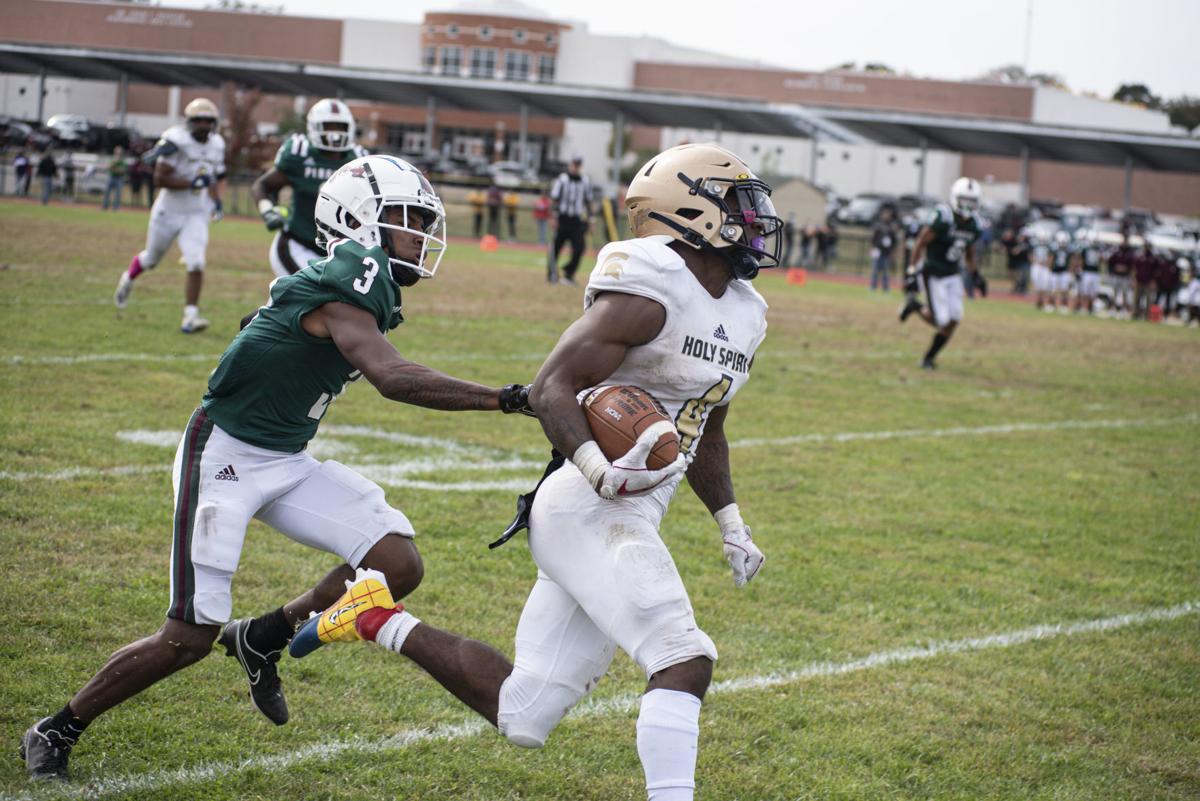 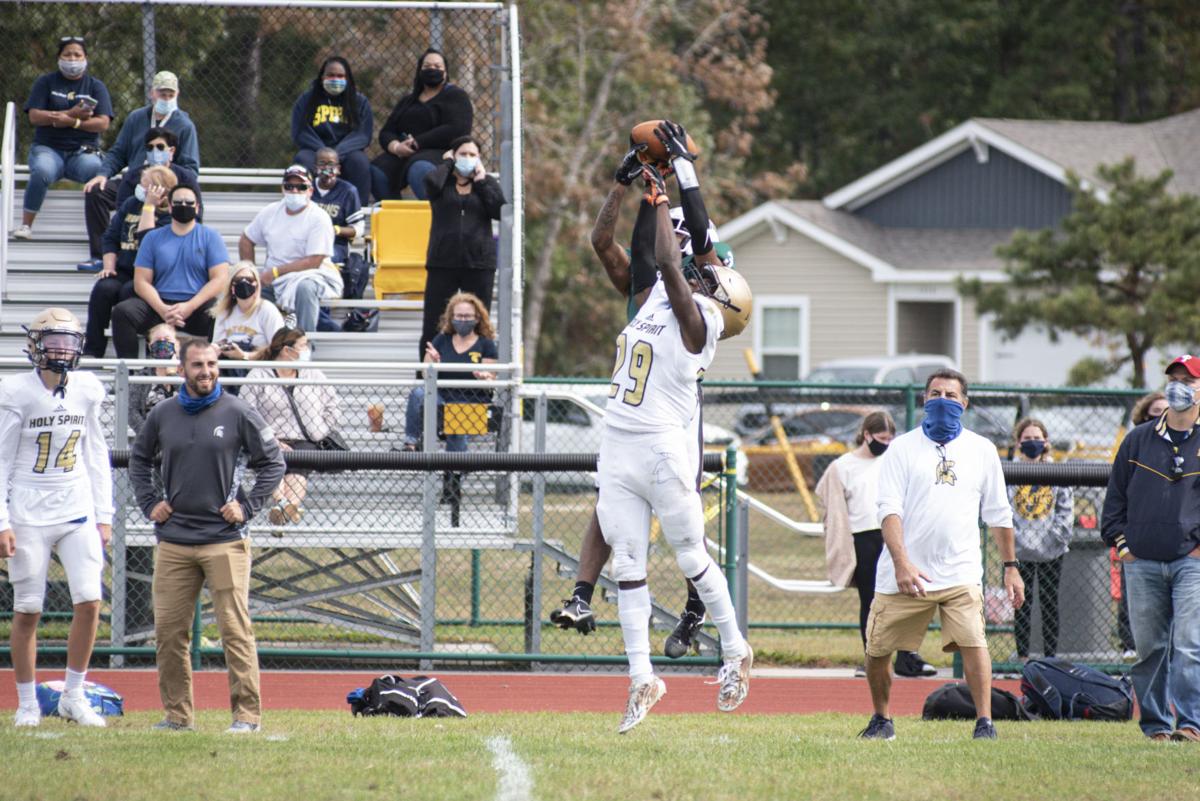 Holy Spirit’s Devin Lee (29) defends a pass during the Spartans’ game against Cedar Creek on Oct. 10 in Egg Harbor City.

By DAVID WEINBERG For The Current

It may have been his most impressive performance of the season.

Rather than risk aggravating an ankle injury to pursue an individual record, the senior spent most of the game on the sideline cheering for fellow running back Devin Lee and the rest of his teammates. Lee rushed for 258 yards and scored three touchdowns to help the Spartans (8-0) complete an undefeated season.

"I knew coming in I wasn't 100 percent," Smith told NJ.com after the game. "My last game was a special moment, so to be able to get two carries meant a lot. After that, I decided to sit down and let other kids get a chance. I didn't want to be selfish."

Smith had an opportunity to make history.

And he had a pretty good chance of achieving the milestone, considering he had rushed for over 300 yards twice earlier in the season. Instead, he finished with 1,719 yards.

The bigger picture will include a college scholarship.

Smith is one of the state's most-sought after recruits. He initially verbally committed to Colorado State but has since restarted the recruiting process. Duke, Florida State, Iowa, Iowa State and Vanderbilt have also expressed interest.

Several of those schools have recruited local players before. Wildwood's Randy Beverly played cornerback for Colorado State in the 1960s before going on to star for the New York Jets. Galloway Township native Myron Rolle, who is now a neurosurgeon in Massachusetts, was a safety for Florida State from 2006-09. Josh Eames, a 2003 Lower Cape May Regional High School graduate, was a starting guard at Vanderbilt.

The school that lands Smith will be getting an outstanding player and person.

"Not only a great young man but a class act," Derryk Sellers, President of the West Jersey Football League, said on Twitter. "Always about others and not him."

Atlantic City-Holy Spirit was one of the last games played in a season that was shortened to a maximum of eight games due to the cornavirus pandemic.

Ocean City wound up playing seven and a half games.

Pleasantville was forced to pull out of its annual Thanksgiving Day game against the Red Raiders because of COVID-19 concerns. Ocean City could have simply ended its season but sought to play one more game to give its seniors a proper sendoff.

Williamstown ultimately stepped up to play the host Red Raiders on Thanksgiving Eve. Ocean City was trailing 28-6 at halftime when Williamstown officials informed its team that someone connected to the team who was not in attendance had tested positive for COVID-19 and that the team was ordered to immediately return to its school.

"I was glad to come out and play one more game with the guys," Ocean City quarterback Joe Repetti told The Press of Atlantic City. "But it hurts to end like this."

It was one of at least three games to be halted at halftime of a truly weird fall sports season, though the other two had nothing to do with COVID-19.

On Oct. 2, Wildwood was opening its season against Pitman at Maxwell Field. The Warriors were trailing 20-12 when a brawl broke out on the field on the final play of the first half. Referees ended the game on the advice of Wildwood officials, thus extending Wildwood's six-year losing streak. Two weeks later, Wildwood ended the 47-game slump with a 30-6 win over Lindenwold.

The most bizarre halftime postponement, however, involved the Middle Township boys soccer team. Specatators attending one of the Panthers' home games last month had difficulty accessing the men's Port-a-Potty. A security official pried open the door to discover a 36-year-old dead male inside. No foul play was suspected.

One of the perks of playing at Cape May National Golf Club is the ability to go fishing in the water hazards on the course. Some duffers pack a fishing rod along with the clubs and spend a few minutes trying to hook a bass when the course isn't crowded.

I pack a ball retriever and go fishing for Titleists, Calloways and TaylorMades during the breaks.

Last Saturday, I had to retrieve my nine iron and coffee mug.

After sending my second shot on the Par-5 fourth hole into the lake, I stopped my pull cart at the water's edge, ventured over to see if I could find the ball. When I heard a splash, I turned around to find my cart rolling backward into the water, thus leaving my bag and all its contents floating amidst the geese.

Someone asked me why I didn't take a picture. My answer was because my cell phone was in my bag. For some reason, my phone was the only thing that wasn't soaked.

David Weinberg's columns can also be found on his Dave Weinberg Extra Points Facebook page and blog, as well as on 973ESPN.comc. His podcast, Dave Weinberg's Tequila and Touchdowns, can be heard on Anchor, Facebook and Twitter. You can also hear him 5:10 p.m. every Tuesday at Newstalk 1400-AM WOND and WONDRadio.com on Off the Press with Scott Cronick and at 5:35 p.m. Wednesdays for his Beat the Degenerates appearance on Cronick's show. His Weinberg Wednesday segment airs at 6:15 p.m. weekly on 97.3-FM ESPN.

Stockton University posted its best finish ever at the Mid-Atlantic Rowing Conference Championship on Sunday by placing second at the regatta,…

Holy Spirit’s Devin Lee (29) defends a pass during the Spartans’ game against Cedar Creek on Oct. 10 in Egg Harbor City.