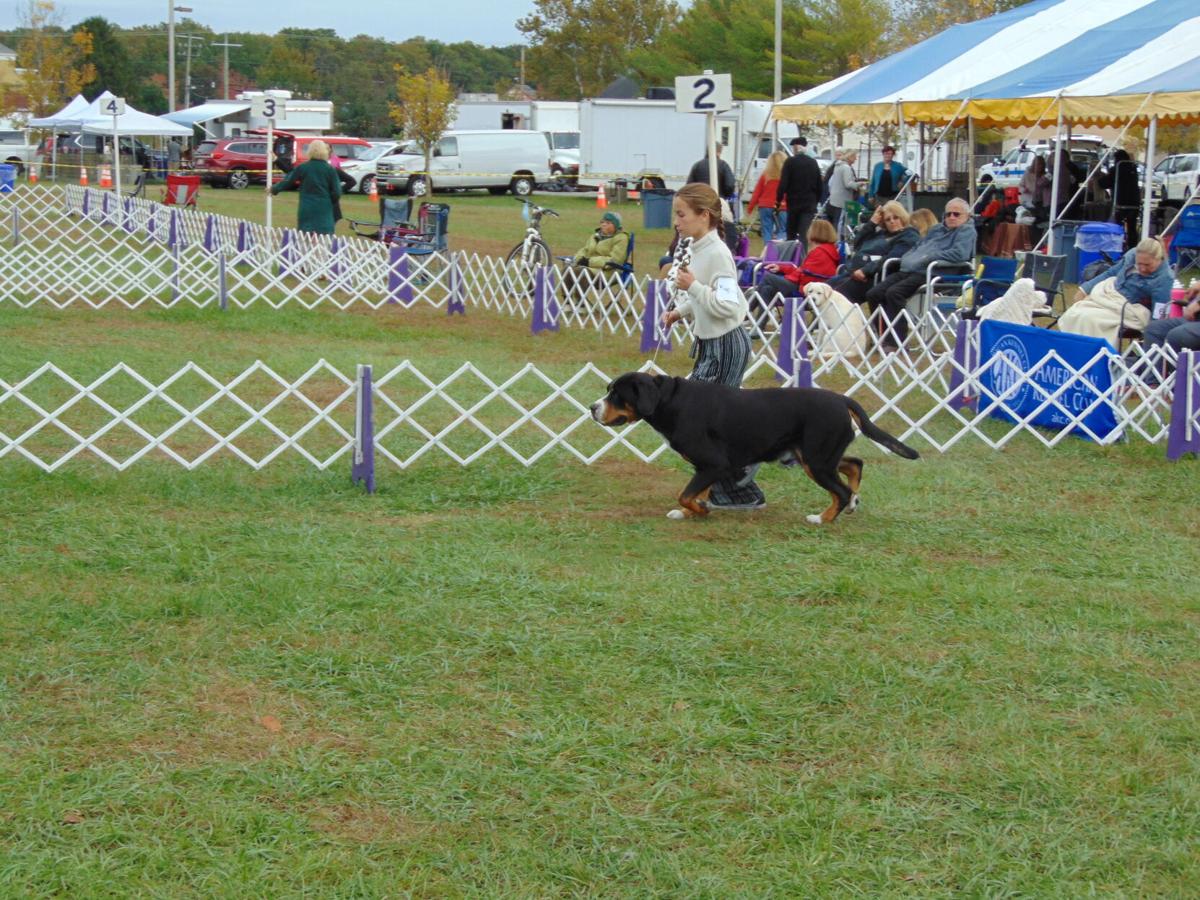 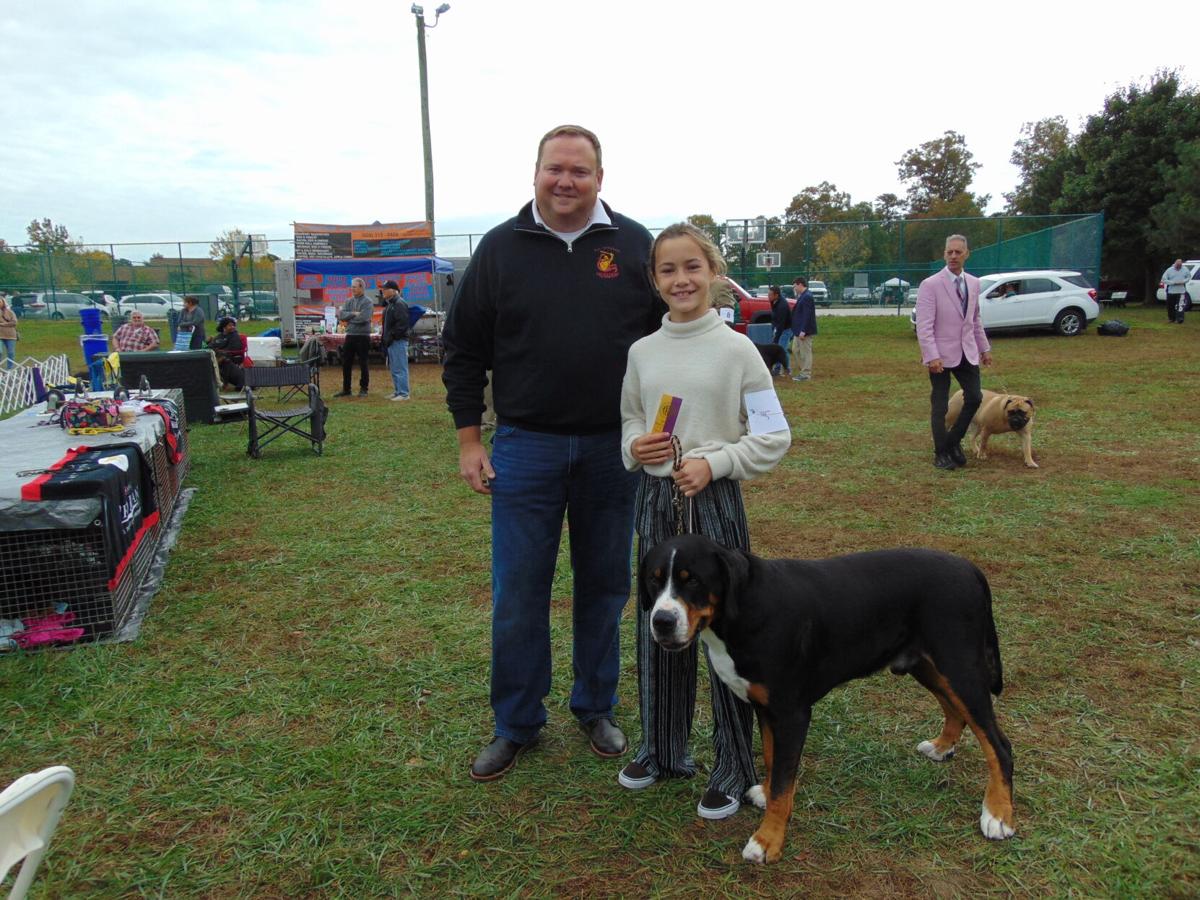 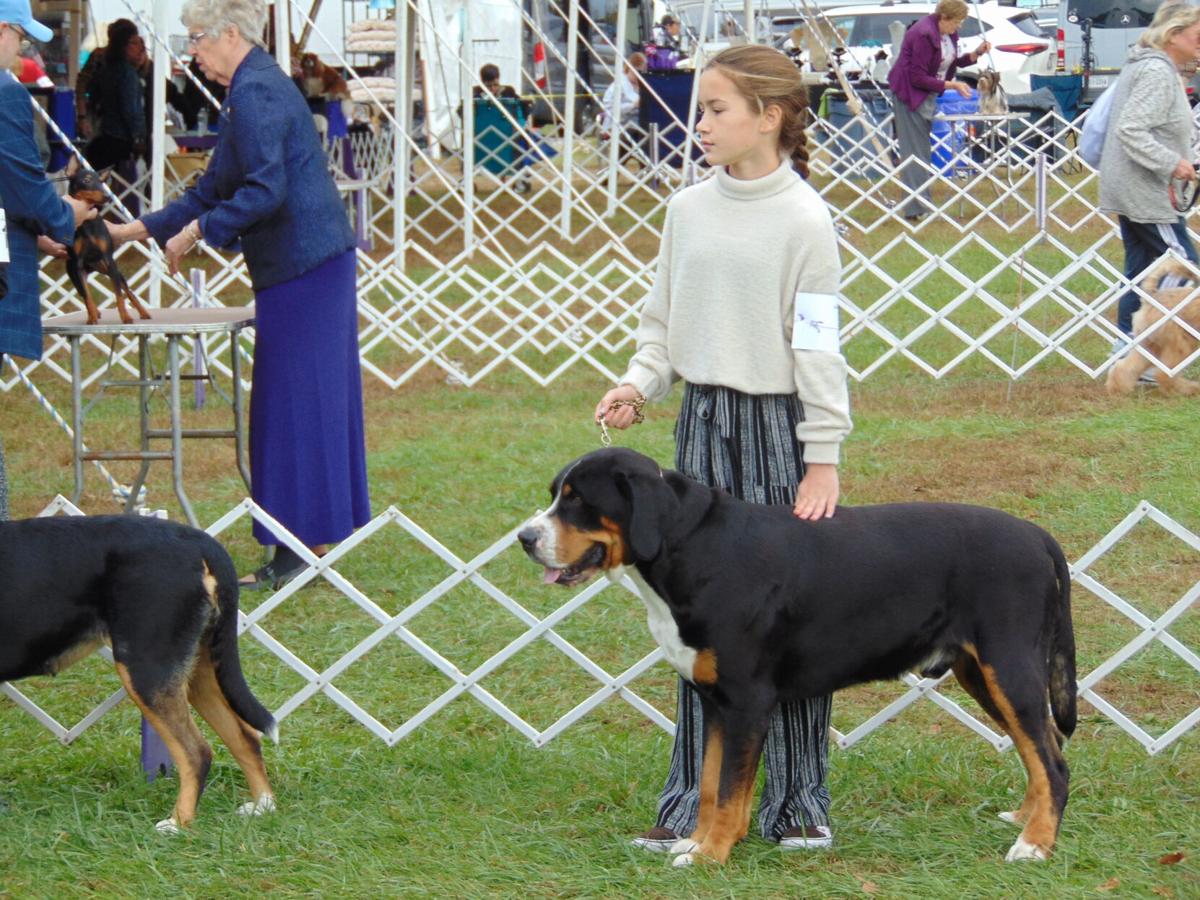 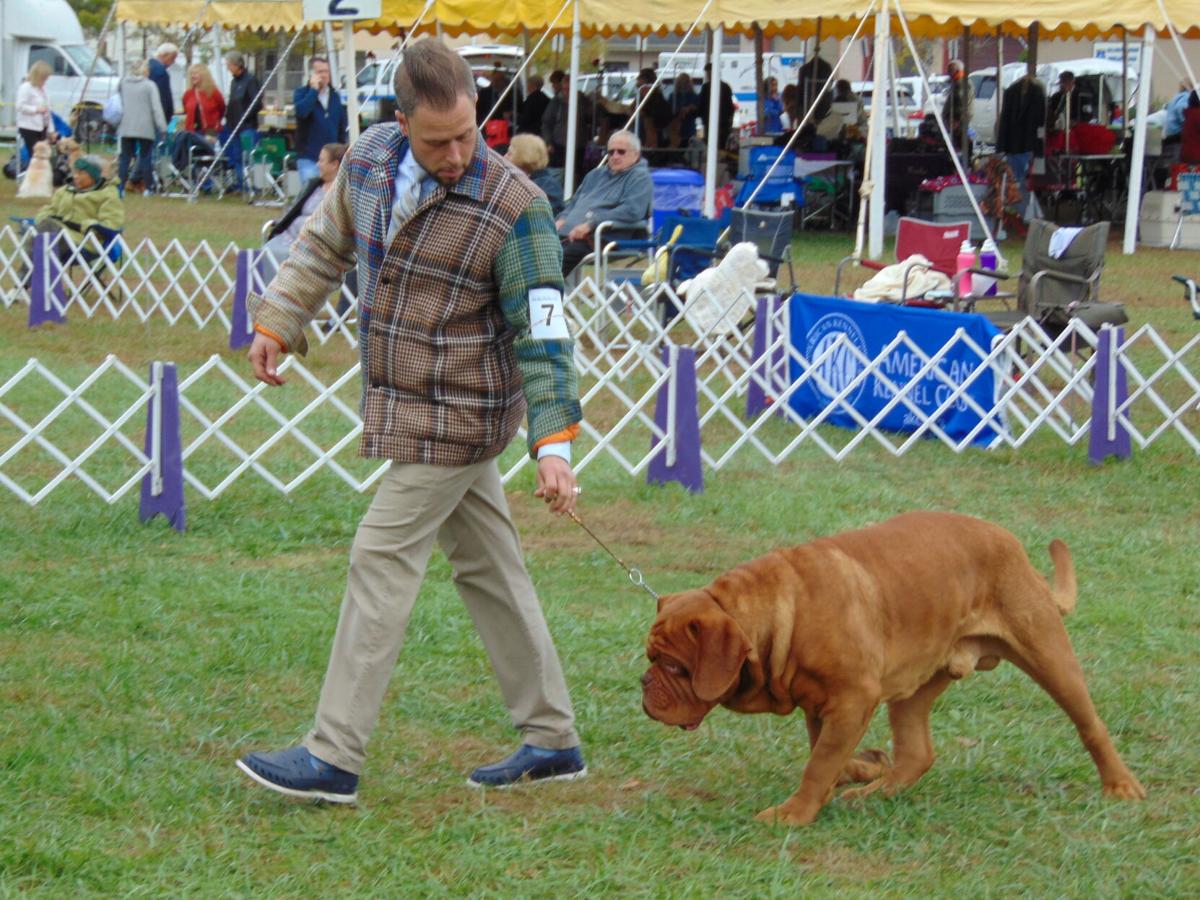 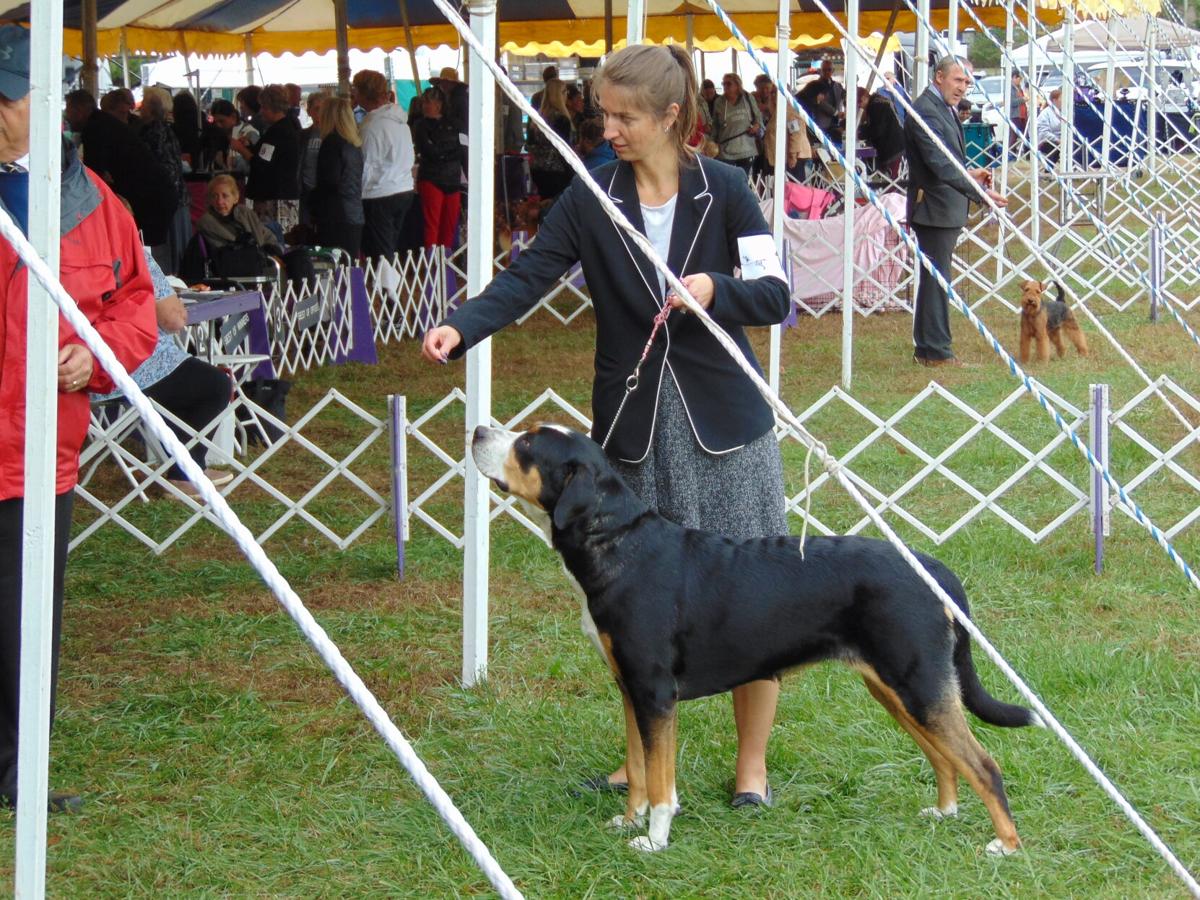 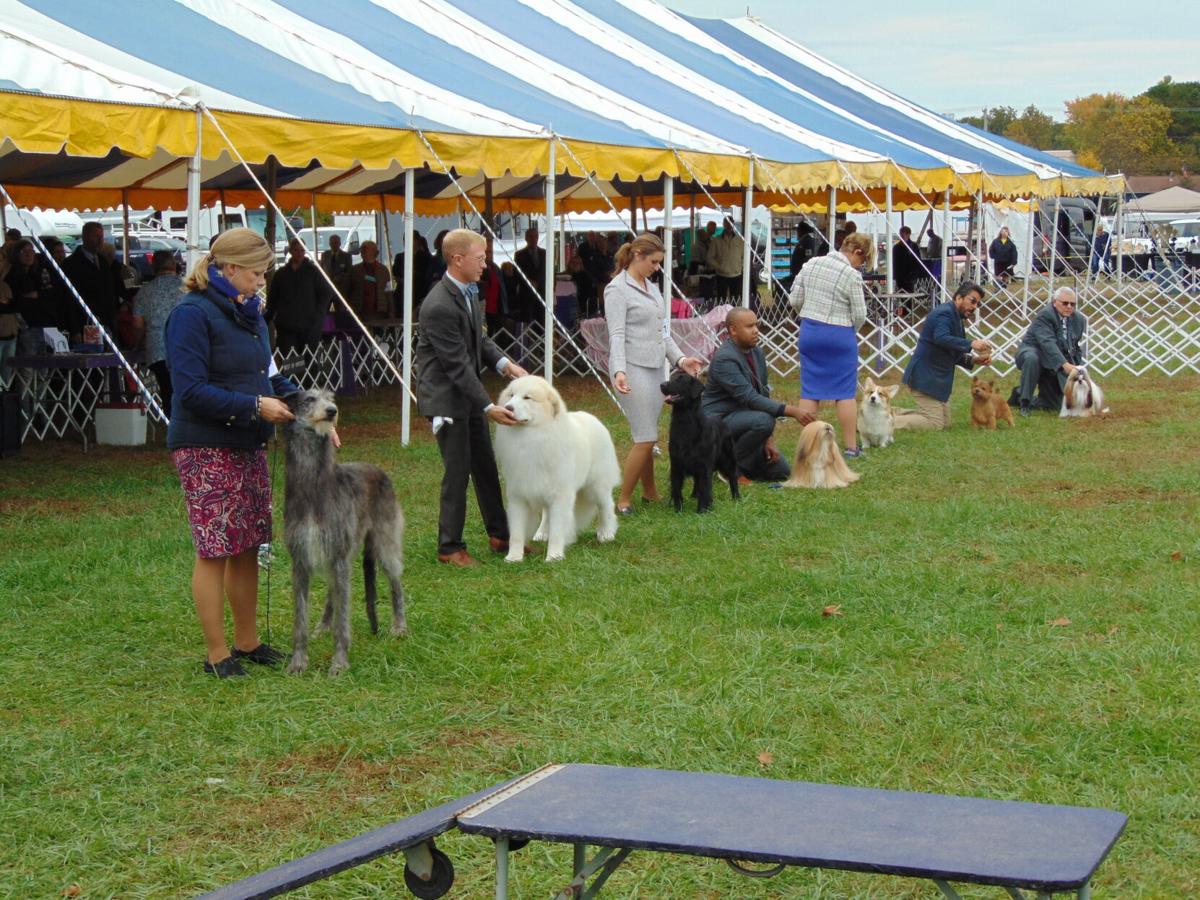 Handlers prepare to have their dogs judged. 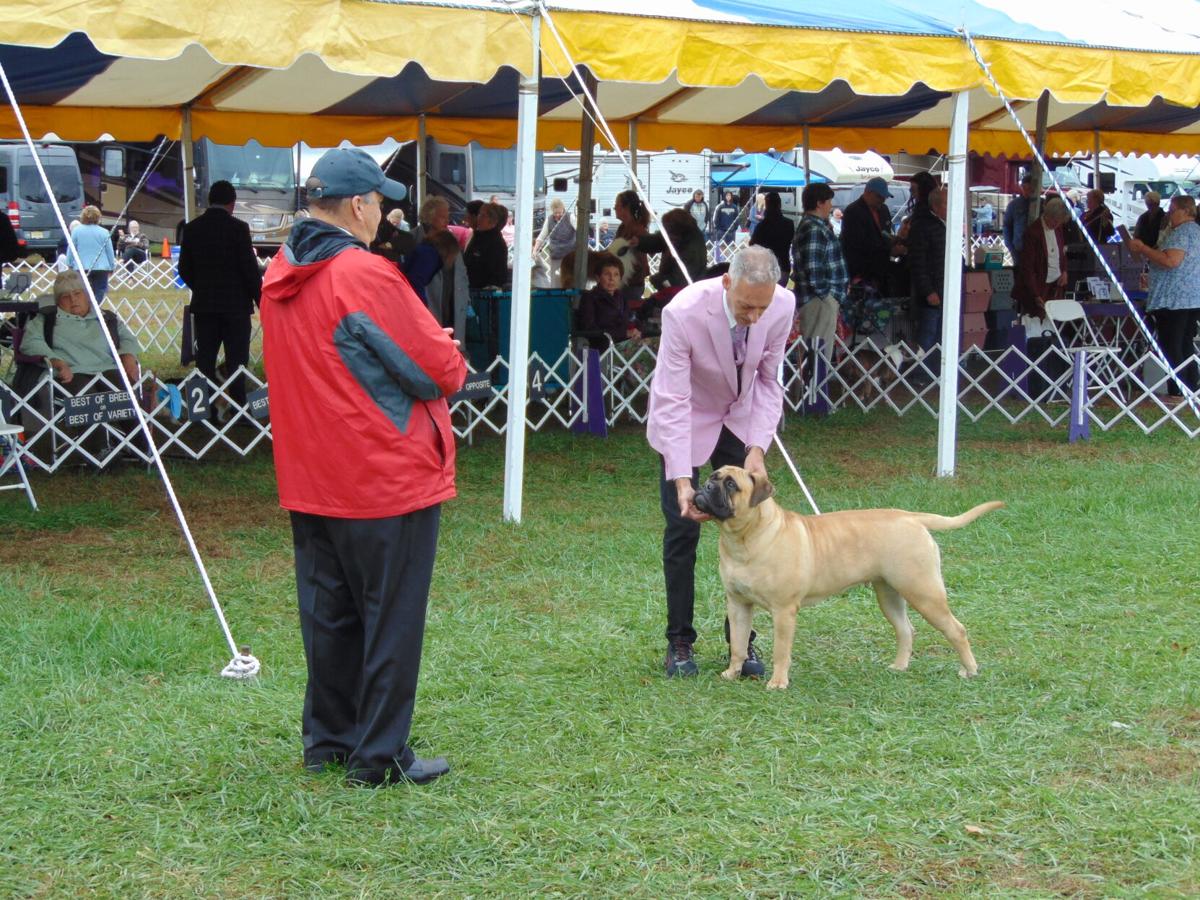 Drew Houlis of Oceanport shows his Bull Mastiff Eunice to the judge. 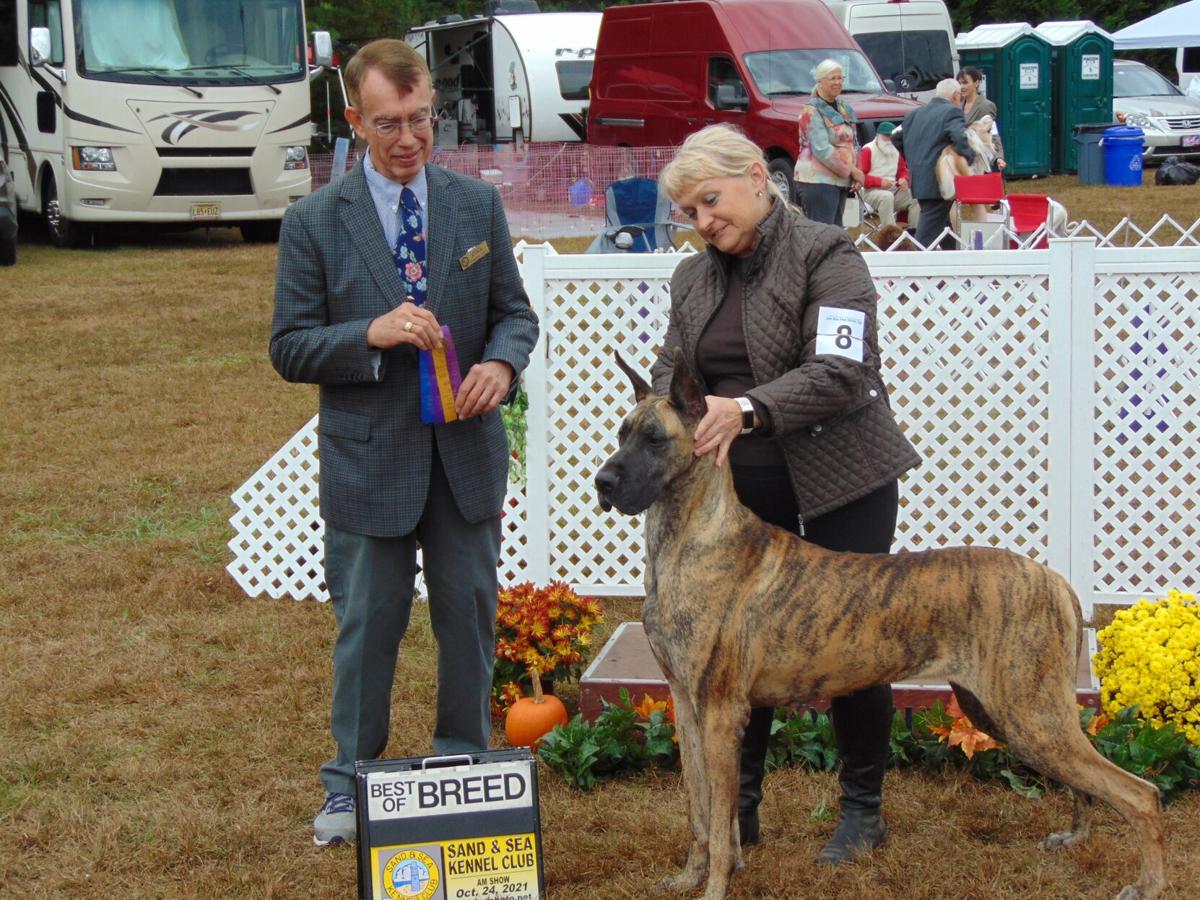 GALLOWAY TOWNSHIP — A couple of years ago, Emma C. Attales School student Grace Marczyk watched a movie titled "Beverly Hills Chihuahua," about a dog who couldn’t enter a dog show because it was not a purebred.

That struck a nerve for her, and she decided to start her own dog show where breeding was not a requirement.

“I wanted all dogs to be able to participate,” Grace said.

Joining with her friends two years ago while she was in the fifth grade, they started the annual Absecon Dog Show to raise funds for charity. The dogs were judged by Absecon Schools students, and judging was based on obedience.

Hundreds of individuals have attended the event the past two years since its creation. The 2021 Absecon Dog Show included more than 50 dogs and raised over $3,000 for the Humane Society of Atlantic City.

Grace has now switched roles from dog show judge to handler, as the 12-year-old had the opportunity to participate in the Gloucester County Kennel Club/Sand and Sea Kennel Club Dog Show held in Galloway Township on Sunday as a handler for Skye, one of Absecon School District’s therapy dogs.

Skye, a Greater Swiss Mountain dog, is no stranger to the ring, having previously won 38 best of breeds, including two at the National Dog Show. Skye had also been invited to the Westminster Dog Show as the number four show dog in his breed back in 2017-2018.

Grace has been able to work with Skye within the classroom in Absecon, but on Sunday she had the opportunity to parade Skye in front of the judges. And it turned out to be a very rewarding experience as Skye captured the Best in Breed title.

“She is a natural leader in the classroom and as an athlete,” he said. “She exudes confidence and the experience interacting with handlers at this event will only add to her confidence.

“For her to win when competing against professional handlers was amazing. Grace and Skye won over a dog that was ranked number one in its class last year and the 11th-ranked in its breed all-time.”

“I was so surprised to win,” Grace said. “This was my first time handling a dog in competition. I was a little nervous at first, but it was such a cool experience. I learned so much.”

Grace resides in Absecon with parents Megan and Frederick and twin brother Frederick.

“We have seven chickens and two dogs that are rescues,” Grace said.

What does Grace aspire to for a career? Not surprisingly, she plans to become a veterinarian.

EGG HARBOR CITY – SustainableEHC, the city’s Green Team, has announced that the municipality is the recipient of a second $30,000 New Jersey F…

Police blotter information is supplied by local police departments and other law enforcement agencies. All people named are presumed innocent …

EGG HARBOR CITY — On election night it appeared that the three Republican incumbents had retained their seats on the Egg Harbor City Council.

Cedar Creek Theatre will stage “The Curious Incident of the Dog in the Night-Time,” an award-winning play by Stephen Simons.

GALLOWAY TOWNSHIP — A couple is looking to donate an organ to someone who would benefit from its use. Before those who know of someone who mig…

BRIGANTINE — Students at the Community School did their part to honor veterans with their second annual Step for Vets program. In years past, …

Handlers prepare to have their dogs judged.

Drew Houlis of Oceanport shows his Bull Mastiff Eunice to the judge.