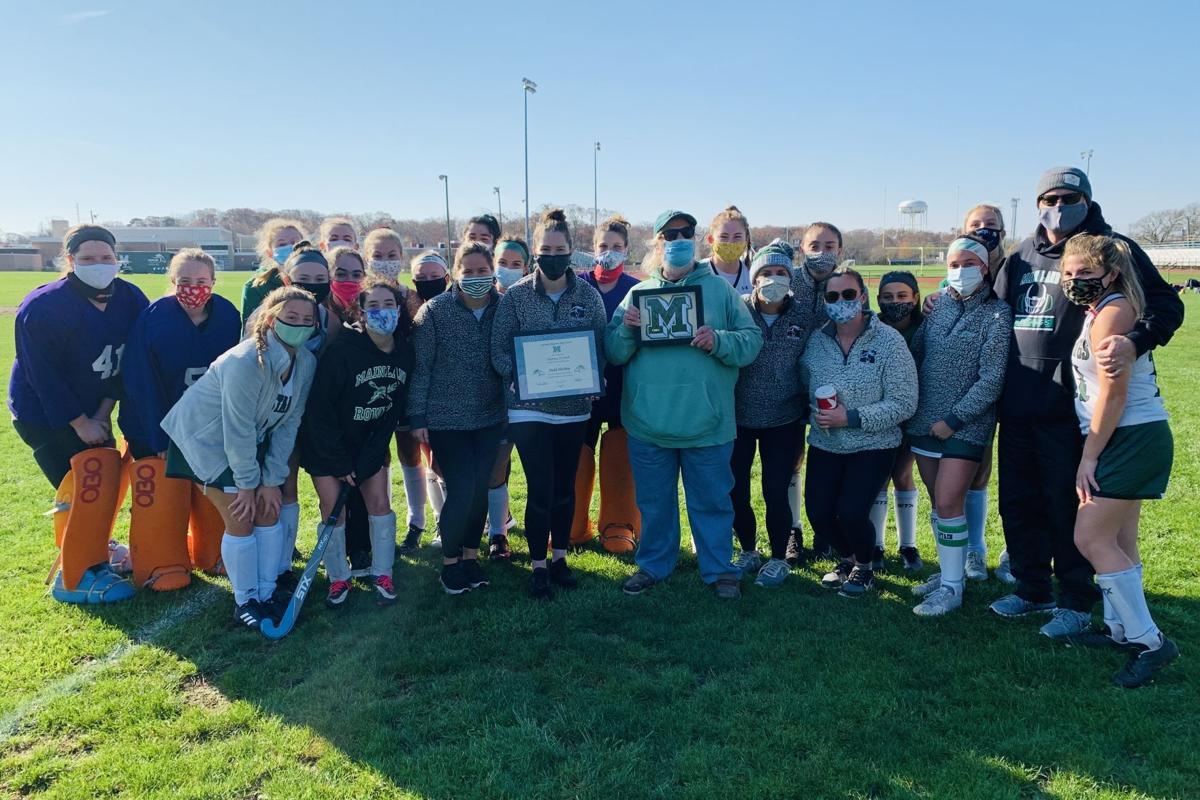 The entire Mainland field hockey team congratulated their number one fan, Jimmy Powell, on Saturday morning when they presented him with a varsity letter, captain's pin, certificate and game ball for his faithful support of the team. 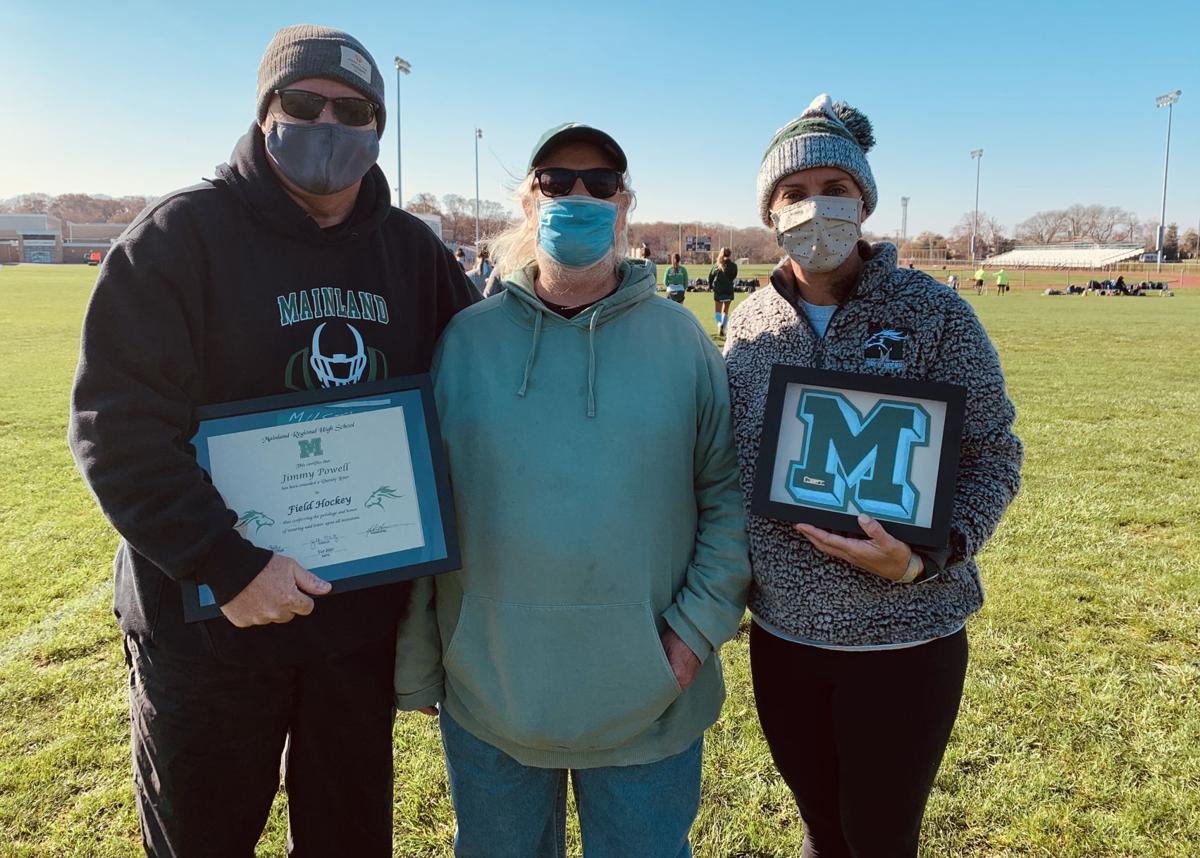 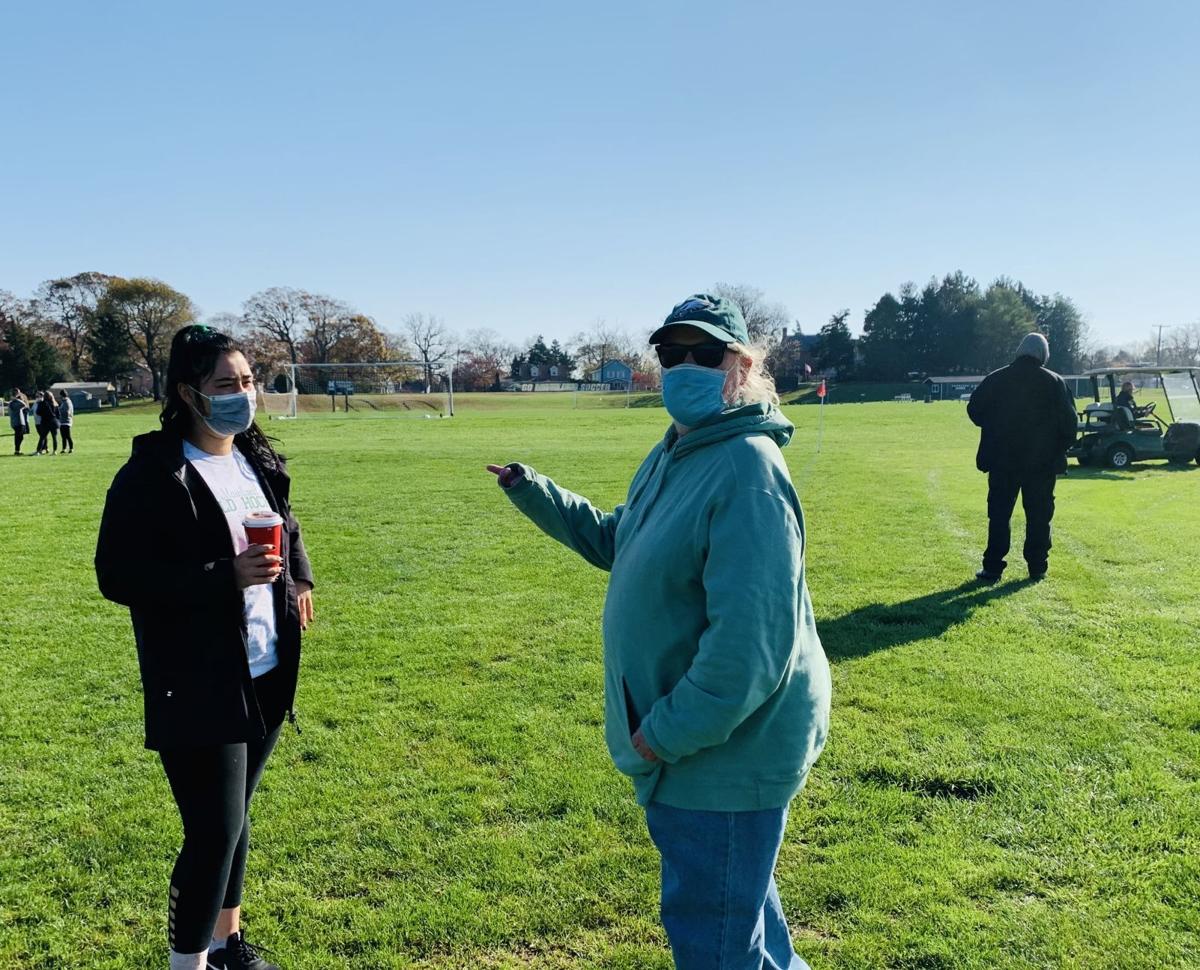 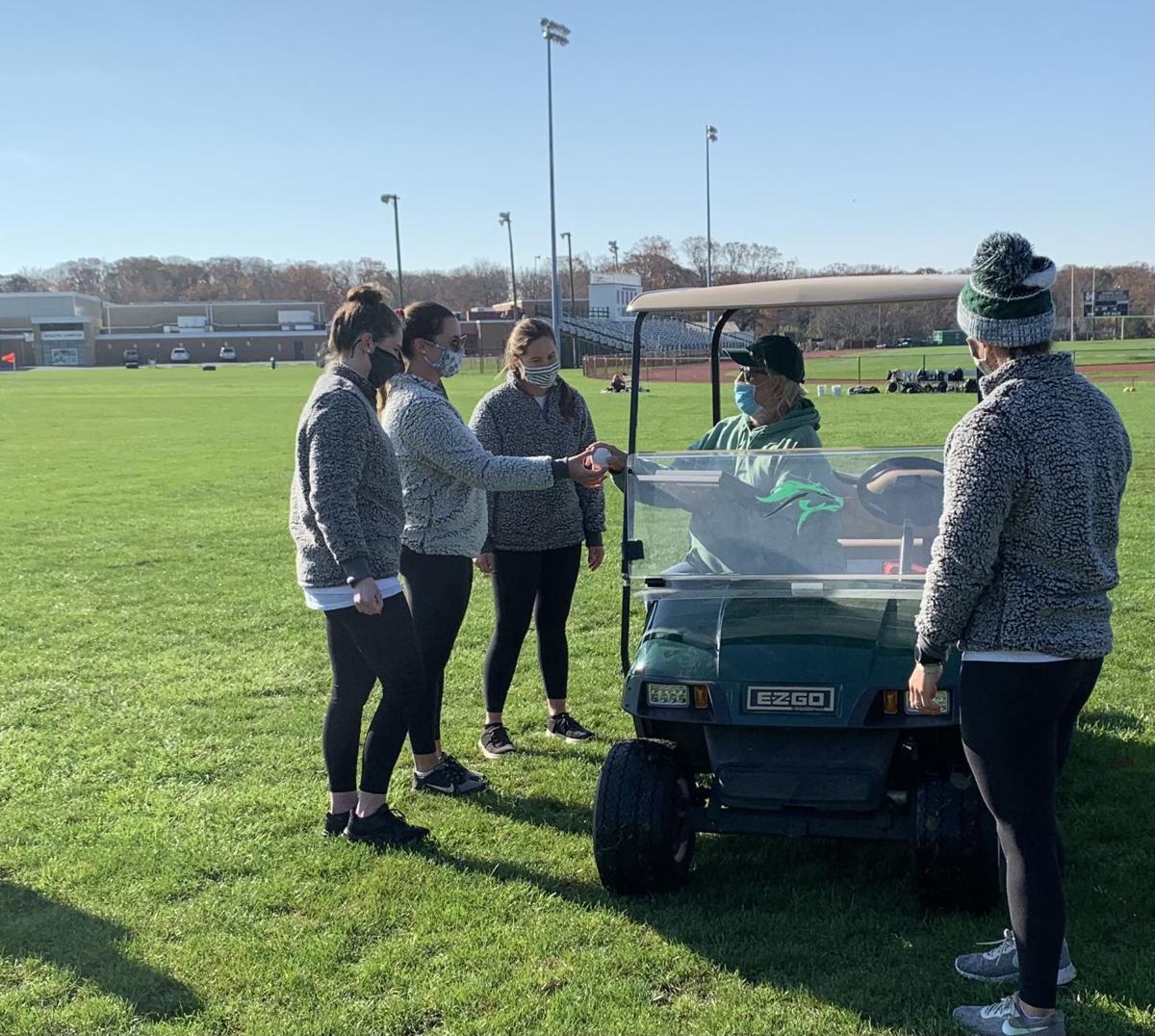 Mainland field hockey players present Jimmy Powell with a game ball prior to the start of the last game of the season Saturday in Linwood. 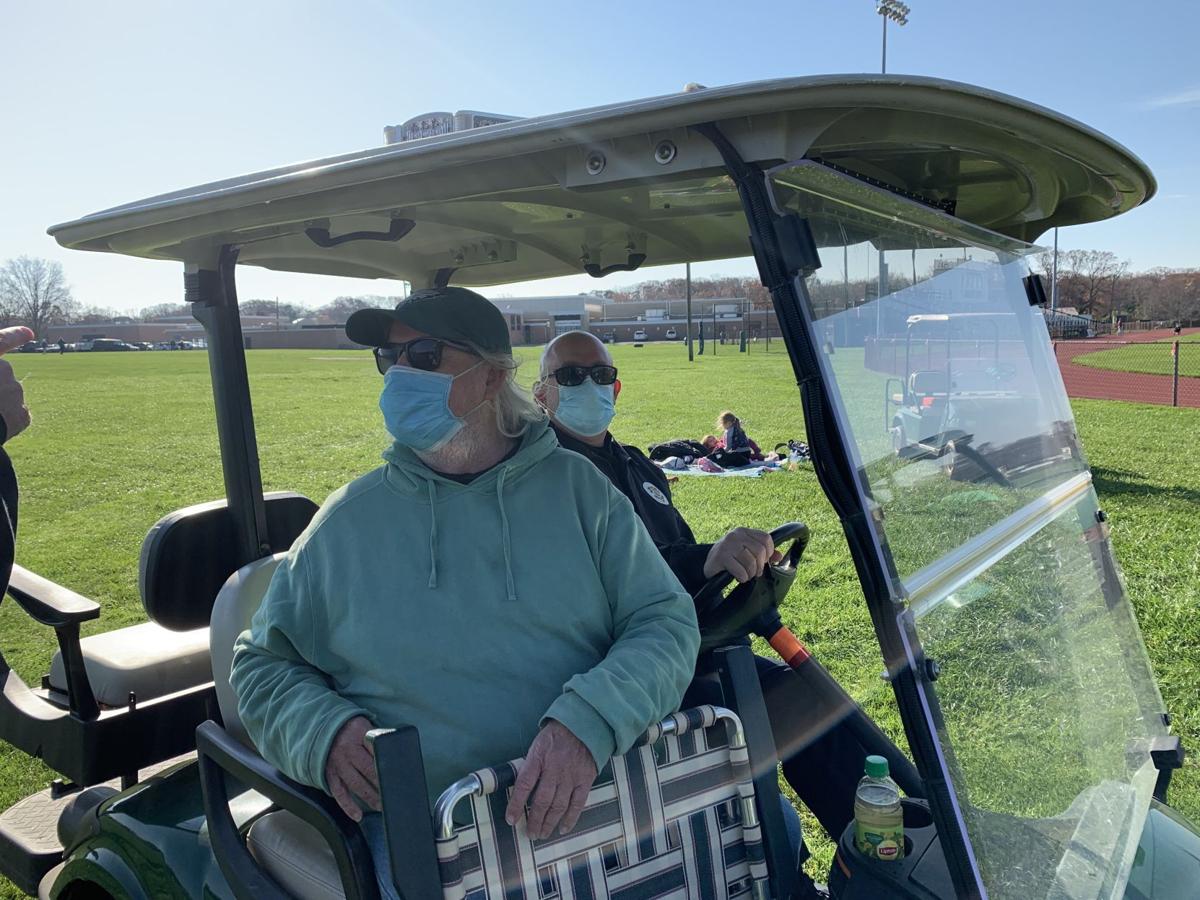 Jimmy Powell gets a lift across the field from Mainland Regional High School Special Officer Anthony DiSciascio for the final field hockey game of the season.

By Suzanne Marino For The Current

LINWOOD — As the Mainland Regional High School field hockey team was finishing its warmup Saturday morning for a game against rival Atlantic City, Jimmy Powell arrived for the game. That is a common site for the players and coaches; Powell has been coming to Mainland games for more than 20 years.

There was a special surprise when Powell arrived Saturday for the game as the coaches and players wanted to show their appreciation for his unwavering support not only for field hockey, but for all of Mainland sports. Prior to the game, Powell was asked to join the team at midfield. They honored him with a coveted varsity letter, captain's pin, a certificate memorializing the team appreciation for this support and a game ball.

For the 71-year-old Powell, of Margate, attending Mainland games is just something he does, and he does it faithfully.

“He’s pretty amazing,” said Mainland athletic director Mike Gatley. “Jimmy rarely misses a game; he is a super fan. Football, basketball, soccer, field hockey, softball and wrestling; Jimmy makes it to all of them, home and away. I think our kids really appreciate Jimmy and he knows the game. He compliments the players when they do well and if they lose, he will always make sure to tell them they put up a good fight. Sometimes parents can’t make it to an away game, and I think the kids feel a little better when they see Jimmy is there to cheer them on.”

In season, when teams have been in tournaments all over the state, Powell is one of the first people he advises of the schedule or any schedule change because he knows he will be making plans to attend the game, whatever sport and whatever part of New Jersey it takes him to, Gatley said.

Jill Hatz is the head coach of the field hockey team and a former Mainland player herself. She called Powell a super fan as well and said, “I am a 2002 MRHS grad and played field hockey, softball and basketball. I remember him being at all of our basketball games and seeing him at football games. As a coach, I have noticed he roots for every team and even travels to away games. He follows our stories in the papers and is hands down our biggest cheerleader. He knows the players by name, and he can even give a recap of good plays after the games. Jimmy is a big part of our community, and I think this recognition will show him that we appreciate the love and support he gives to our teams. The players love seeing him at the games. He is the first to congratulate us on a win or tell us we fought hard after a loss. No matter the outcome of the game, I think simply seeing that he is there makes everyone feel better. He has made a huge impact on our players by simply being in attendance and cheering for them.”

Powell never attended Mainland, but one of his nephews did “way back when,” as Powell put it, and he started coming to the games and said he enjoyed the atmosphere and started to attend more. Though his favorite sport is baseball, he enjoys all sports. Originally from Upper Darby, Pennsylvania, Powell said his parents owned a summer home in Margate and eventually they moved to the area. He is retired after working more than 25 years for A&P and later Super Fresh Markets.

The super fan was touched by gesture when he was presented with the varsity letter and captain's pin. “I never thought something like this would happen. I come out to support the team and cheer them on,” Powell said. He follows pro sports and is a big Yankee fan but high school sports are something special. “They all play because they love the game, and when they do well its great but at the end of the game, no matter the score, they know it’s a game and they go back to just having fun with their friends and that’s pretty great.” He said the framed varsity letter and the certificate would have a place of honor in his house.

Powell stopped one of the players on the sideline before the game began, asking if she would be ready for Millville (their next scheduled game) on Thursday. He stuck around while the Mustangs completed a decisive win with Brooke Albuquerque and Sandi Smoger each having a hat trick and Ariana Dinofa adding one more for a 7-1 win over Atlantic City High School. Alex Siganos had the lone Atlantic City goal. After congratulating the girls, Powell said he was not going too far. He folded up his chair and headed just one field over, where he planned to cheer on the Mainland boys soccer team in their match with a team from Gloucester City.

ATLANTIC CITY — The Police Department, in collaboration with Jewish Family Service of Atlantic & Cape May Counties, received a $740,576 gr…

MARGATE — With the generous support from our community, Jewish Family Service of Atlantic & Cape May Counties was able to provide more tha…

MARGATE — The city had a visit from Santa and his helpers Nov. 28 to kick off Shop Small Weekend.

The entire Mainland field hockey team congratulated their number one fan, Jimmy Powell, on Saturday morning when they presented him with a varsity letter, captain's pin, certificate and game ball for his faithful support of the team.

Mainland field hockey players present Jimmy Powell with a game ball prior to the start of the last game of the season Saturday in Linwood.

Jimmy Powell gets a lift across the field from Mainland Regional High School Special Officer Anthony DiSciascio for the final field hockey game of the season.