Ghastly potions and brews of all kinds will be found amongst the spooky sights at Witch-Craft. 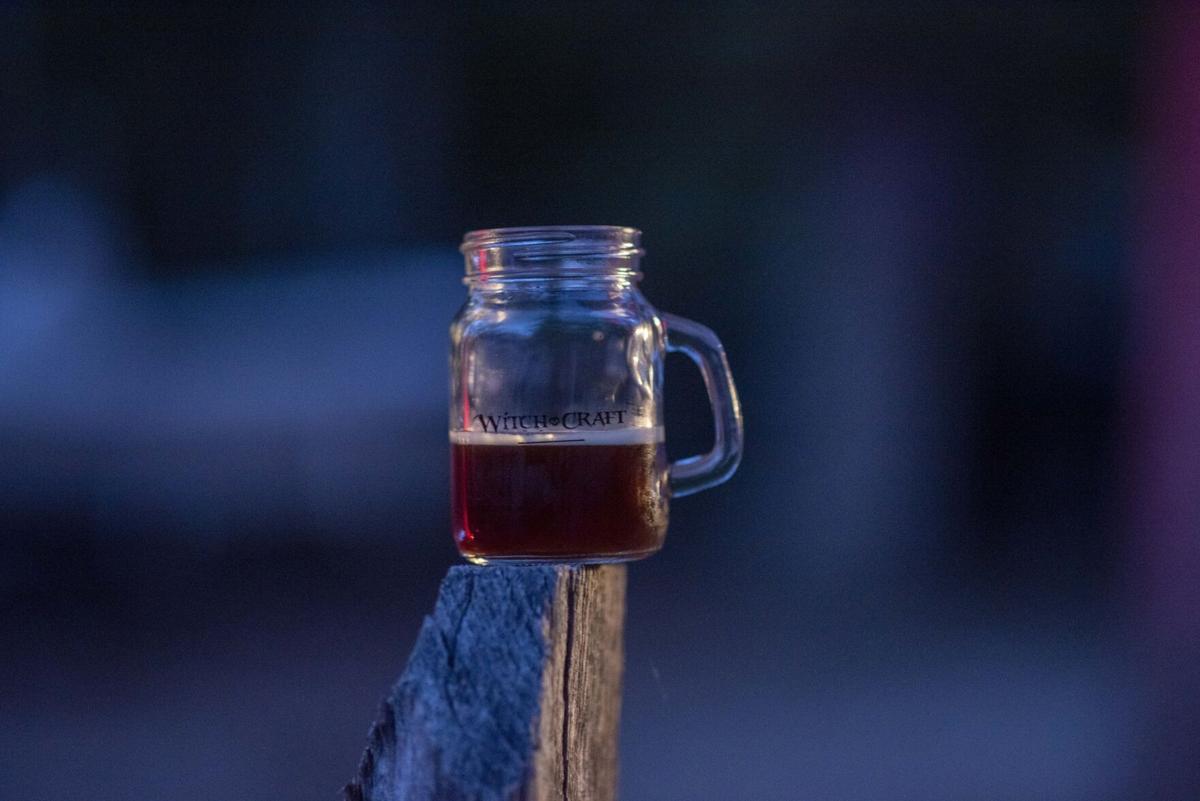 The pumpkin pie eating contest is sure to spice things up in a most festive and gluttonous fashion.

If you ever attended a beer festival and thought to yourself, “This is fun, but it’s just not freaking me out enough,” Witch-Craft, which takes place 6 p.m. Saturday, Oct 16, at Paradise Lakes Campgrounds in Hammonton, is gonna scratch you right where you itch.

Essentially a combination Halloween party/boozy festival, Witch-Craft takes the fun of a simple night enjoying some amazing craft beers and cocktails with friends and throws in a creepy setting deep in the woods, blood-dripping costumes, séances and random people literally screaming bloody murder.

“We did (the now defunct horror fest) Bizarre AC for so many years and, of course, we know a little about how to run a beer fest with the success of the Atlantic City Beer & Music Fest, so we combined the two, and that’s how Witch-Craft came to be,” says Jon Henderson, owner of Good Time Tricycle Productions, the company behind Witch-Craft and many other popular events in our area. “It’s gonna be a lot of fun, and people are going to enjoy it. We are encouraging everyone to dress up and have a blast!”

The scene of the crime“This is exactly what Camp Crystal Lake looks like,” Henderson says, referencing the notorious summer camp where hockey-masked killer Jason Voorhees stalks his victims in the “Friday the 13th” film franchise.

Tucked deep in the woods of Hammonton, Paradise Lakes Campgrounds sets the terrifying tone with a foreboding sense of being in the middle of nowhere. And guests who attended the inaugural Witch-Craft back in 2019 won’t have any level of familiarity with it, because it’s the first time Witch-Craft has been held there.

“The original location at Lake Lenape in Mays Landing is currently under construction. And we wouldn’t have been able to create the kind of experience we wanted with all the construction and everything going on, so we needed to switch venues. And when we were thinking of where to hold Witch-Craft, I thought of Paradise Lakes, and something just clicked in my head. It’s perfect. And it’s not a frequently used location, so it lends itself to being spooky,” Henderson says.

*Paradise Lakes Campground is a bit tricky to find and parking is limited, so it’s strongly suggested that patrons attending Witch-Craft use the off-site parking and shuttle options, which are are free and located at Our Lady of Mount Carmel at 298 Tilton Street in Hammonton.

The brews and the boozeOne of the toughest parts about attending either a beer fest or a festival focused on a particular spirit, is that there always seems to be one person in the group that doesn’t drink beer or doesn’t like hard liquor. But with Witch-Craft, everybody wins, as the focus is on both, with more than 60 providers of craft beverages of all styles.

Is cider more your thing? You’re covered — try one of the fine libations from Original Sin Hard Cider.

Do you drink nothing but fancy cocktails made with fine spirits? You’re in luck — Blue Rascal Distillery, Mr. Fingers Alibi Gin and Lazy Eye Distillery will all be there, plus many more.

Hard Iced Coffee? We’re surprised that’s even a thing, but yeah, they’ve got it.

Nobody gets left out at Witch-Craft, and that includes designated drivers who can purchase tickets at the door for $25. Designated driver tickets do not sell out.

Ghoulish grubEating brains zombie-style is fun and all, but it can get old after a while. Luckily Witch-Craft rounded up some of the best eats from local spots like Essl’s Dugout, Josie Kelly’s Public House, Jay’s Crab Shack, Vagabond Kitchen & Tap House and more to keep you more than satisfied.

How much: Tickets, priced at $65, can be purchased at WitchCraftNJ.com. Tickets purchased at the door (if available) will be $70.

The frights and delights

Looking for stuff to do while you sip your brew? Check out these fun activities that Witch-Craft has in store for you:

Every great Halloween party has to have a costume contest, and Witch-Craft is no exception. There will be multiple categories, meaning multiple chances to win. And with a $2,000 prize pool, you can expect people to bring their A game. It’s gonna have to be pretty outrageous in order to win, so expect blood, gore and a whole lot of creativity.

Readings and a séance

In case you weren’t freaked out enough by being out in the middle of the woods with a group of bloody strangers, there will be opportunities to contact the dead directly via live group readings and a séance from medium Artie Hoffman.

How would you react if you were being chased by Michael Myers? At Witch-Craft you’ll have the opportunity to show everyone, as the Scream Queen Contest will give folks a chance to let out their most blood-curdling screams. The most convincing shriek will be judged by the crowd.

Looking to mix up the perfect witches brew this Halloween season? Lee Sobel of Rhythm & Spirits will be mixing up some incredible potions, making use of the best spirits from distilleries at the festival. Head to the demo corner of Paradise Lakes Campground to watch him work his dark magic and maybe try a few samples of his ghastly creations.

Returning for the second time at Witch-Craft is the Squidling Brothers Circus Sideshow. A fast-paced and unforgettable experience, the show combines elements from the American carnival and theater of the absurd traditions to bring you a shocking and high-risk show like no other.

It’s October – and who doesn’t love all things pumpkin? Lattes, cakes and, most famously, pies of the pumpkin variety have their annual moment to shine during this season, and at Witch-Craft you’ll have your moment to stuff your face as fast as humanly possible with fresh, gooey pumpkin pie. Enjoy the freshest spices of autumn as you load your piehole on your way to sweet victory.

Who said you need a big sound system to have a dance party? The silent disco at Witch-Craft will offer guests a chance to cut a rug with nothing but a pair of ear buds providing the soundtrack.

A whole weekend of late summer festivals fire up the Wildwoods

If you are one of those folks that thinks the Wildwoods only spring to life from Memorial Day to Labor day you are sorely mistaken. Sure, those are the months that things get packed to the breaking point, but there is plenty to do after Labor Day, and this weekend there is even more than usual, as no less than four major events will be taking place – The Irish Fall Festival, Oktoberfest at Morey’s Piers, the Wildwood Fall Classic Car Show and Seafarer’s Celebration. Sound like fun? We thought so too. And in case you are thinking of heading down to check out the action, we’ve got the inside scoop on each event.

Ghastly potions and brews of all kinds will be found amongst the spooky sights at Witch-Craft.

The pumpkin pie eating contest is sure to spice things up in a most festive and gluttonous fashion.