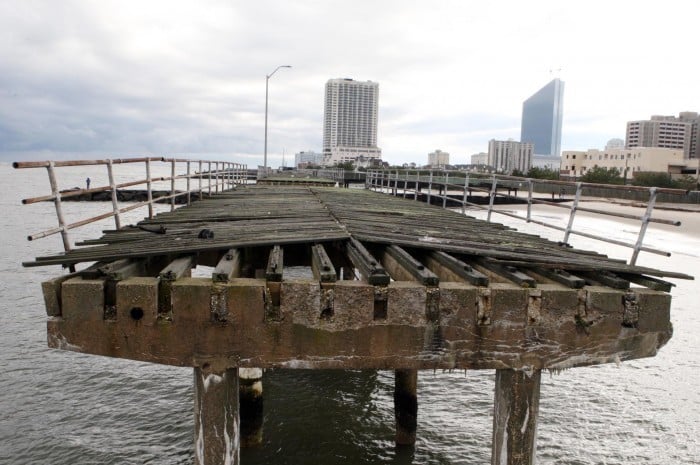 The rebuilding of the South Inlet section of Atlantic City's Boardwalk depends on the building of a protective seawall. Wednesday, November, 23, 2011 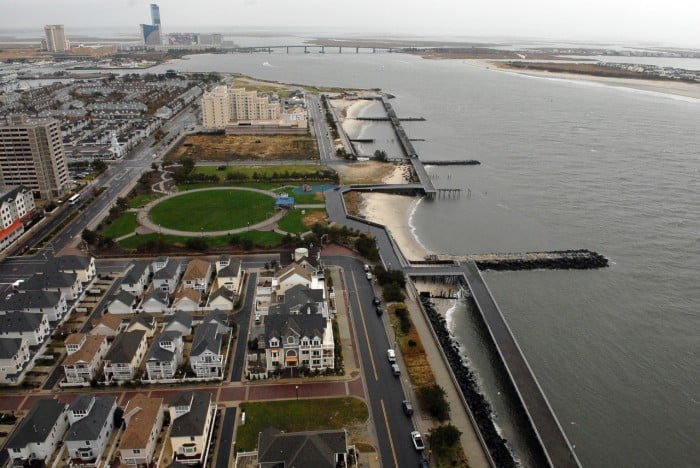 Atlantic City officials borrowed $2.3 million borrowed to repair the Boardwalk. But recently, the stakeholders - including the city - agreed to build a promenade that extends the Boardwalk to Gardners Basin that is landward  - not over the ocean - in that area. Tuesday, November, 22,  2011

Six blocks of the Atlantic City Boardwalk bordering the Absecon Inlet will be bulldozed before Memorial Day, yet there is no plan to rebuild the elevated walkway that has deteriorated unchecked for three decades.

And, during that period, the city has borrowed at least $11 million — money that never went to this stretch of the Boardwalk and often was used for other purposes.

Stakeholders say it’s critical to rebuild this part of the Boardwalk because it would connect the South Inlet neighborhood — the focus of a dramatic redevelopment plan — to Gardner’s Basin, the growing waterside shopping and dining enclave adjacent to the resort’s North Inlet section.

But the city won’t start reconstruction until a protective seawall is in place — and that depends on coordinating as much as $23 million in funding, permits and design decisions by multiple state, local and federal agencies.

That can’t happen soon enough for residents such as Denise Gourley, who has lived in the city 17 years — eight of them in The View, a high rise adjacent to the Boardwalk at New Hampshire Avenue.

“The Boardwalk’s in really bad shape,” said Gourley, 50, a public attendant at Tropicana Casino and Resort. “The lights haven’t worked in five years, and I’ve tripped out here twice, and seen runners fall. (The government) just hasn’t invested any money (here) because poor people live here, and they cater to the casino area.”

Since 1983, Atlantic City officials have borrowed at least $11 million to repair the South Inlet Boardwalk — with no results. Officials blamed some project failures on would-be funding sources coming up empty; others fell victim to the municipal government choosing to spend money on something else before even involving investment partners.

Within the past year, new state regulations established Casino Reinvestment Development Authority control of the Boardwalk and other areas within the Atlantic City Tourism District, as well as a $261 million, 20-year tax rebate deal requiring Revel Entertainment Group to invest in the South Inlet neighborhood surrounding its megaresort that is scheduled to open in May 15.

But despite those changes, history repeated itself recently.

City Council decided Tuesday to divert $750,000 meant to rebuild the Boardwalk between Grammercy and Oriental avenues to pay for improvements to nearby Garden Pier. The governing body did the same thing in October, directing another $1.8 million intended for the Boardwalk to beach replenishment.

City officials say it doesn’t make sense to build a new Boardwalk before the Army Corps of engineers erects the protective seawall, which will consist of a steel sheet pile bulkhead. The Army Corps blames the state Department of Environmental Protection for delays in building the seawall.

“There’s a lot of moving targets, but the city — as well as the CRDA and the federal government — is committed to that whole project,” said Michael Stinson, director of the city’s division of revenue and finance.

Maintaining a boardwalk along the inlet is expensive.

The goal is for the seawall to stand between the ocean and the new Boardwalk. And the city won’t start building without the protection of the seawall, Stinson said.

The Army Corps has planned to put up a seawall along portions of Absecon Inlet since 1999. But as of this week, the federal agency wasn’t finished updating design plans, nor was it able to provide estimated costs or timelines. It has to finalize funding first, Army Corps spokesman Steve Rochette said.

And the Army Corps won’t push for funding until it reaches an agreement on a design with the city and DEP, DEP spokesman Larry Ragonese said.

Putting the seawall between the Boardwalk and ocean will cost more and require more logistical wrangling in advance of the project. But long-term, that set-up will greatly reduce the time and money needed to maintain the elevated walkway, deputy city engineer John Feairheller said.

“There’s been a long-standing issue with the design and and the location (of the seawall),” said Ragonese, whose agency would issue permits for seawall construction to the Army Corps. “The city would prefer it to be outside the Boardwalk, so we’re discussing that with them. We’re getting close to an answer.”

In addition to its share of seawall costs, the city would need another $8 million to take care of rebuilding the Boardwalk in some parts and redecking it in others, said Stinson and Feairheller.

“We have some funds available, but we’re actively looking for grants. And we can’t go after that until we know the seawall’s going to be there,” Stinson said of the typically time-sensitive monetary awards. “We’re not going to spend money to put up the Boardwalk without a seawall because then the ocean will damage it.”

City officials are currently pursuing a NOAA grant to help pay for the city’s portion of Boardwalk demolition costs between Caspian Avenue and McClinton Park, said Keith Mills, the city’s Director of Planning and Development. A decision on that grant is expected in six months.

Atlantic City officials have made at least eight attempts to rebuild the Boardwalk and have borrowed $11 million to do so since December 1980, when they started restricting access to the Boardwalk in the wake of a storm that left the walkway too weak to safely support fishing, police and other vehicles.

The city had $4.35 million set aside this year, but decided during the final quarter to instead spend $2.55 million of that on beach replenishment, Garden Pier stabilization and Public Works equipment. Officials felt that it didn’t make sense to let the money sit with the seawall nowhere in sight and other projects in more immediate need of money, Stinson said.

“By the time (the seawall) moves forward, we’ll have an additional capital budget to fund that project,” Stinson said. “There’s no reason to keep capital funds sitting there in this interest rate environment — you’re not earning interest.”

The city will start next year with the remaining $1.8 million for Boardwalk reconstruction, plus $650,000 from the CRDA for demolition of the Boardwalk between Caspian Avenue and McClinton Park and the $2 million FEMA would reimburse them for redecking the Boardwalk between Rhode Island and Oriental avenues, Feairheller said.

That still leaves Atlantic City $3.55 million short of the estimated $8 million needed for Boardwalk redecking and reconstruction alone — that doesn’t include the city’s portion of the seawall cost shared with the Army Corps and DEP.

Thompson wants the demolition to happen by Memorial Day.

“We’re putting the money in now so (the demolition) happens fast. Revel’s opening, but a lot of local people use the beach at Caspian Avenue. And they shouldn’t have to look at that,” Thompson said of the dilapidated structure over the shore break. “The other work is very involved with the Army Corps, with permitting, with funding; there’s a lot of moving parts.”

But the bottom line is how critical improving the Boardwalk — and other infrastructure — is to the South Inlet and city in general, Thompson said. Predominantly a checkerboard of vacant lots and boarded up buildings, the neighborhood strikes stakeholders as the section of Atlantic City with the most redevelopment potential given its baseline and the $261 million to be reinvested there during the next two decades as per Revel’s tax rebate deal with the state.

If rebuilt, the Boardwalk would connect the South Inlet — and the rest of the city — to Gardner’s Basin. The harbor-adjacent cluster of restaurants and small shops grew during the past five years despite the recession that hampered the rest of the resort and most of the country, said Jack Keith, executive director of a nonprofit that administers the Basin.

Keith said last week he met recently with representatives from Jones Lang LaSalle, the CRDA’s consultant on the Tourism District Master Plan, about expansion plans for Gardner’s Basin. The only detail he would provide: ideally, the Boardwalk will run continuously — or be extended by a similar pedestrian walkway — to the Basin.

“Finishing the Boardwalk is critical to the development of the Basin and will facilitate plans Revel Entertainment has to give guests access to Gardner’s Basin and other parts of the city,” Keith said. “If the pedestrian walkway and bikeway were improved, they would be a tremendous positive to Gardner’s Basin — and to the city — because it would give people another reason to come to the city.”

Funding details: To be determined

Timeline of the Boardwalk along Absecon Inlet

1980: Atlantic City bans police and fishing vehicles from the Boardwalk bordering the Absecon Inlet after a bad fall storm weakens the elevate…

The rebuilding of the South Inlet section of Atlantic City's Boardwalk depends on the building of a protective seawall. Wednesday, November, 23, 2011

Atlantic City officials borrowed $2.3 million borrowed to repair the Boardwalk. But recently, the stakeholders - including the city - agreed to build a promenade that extends the Boardwalk to Gardners Basin that is landward  - not over the ocean - in that area. Tuesday, November, 22,  2011