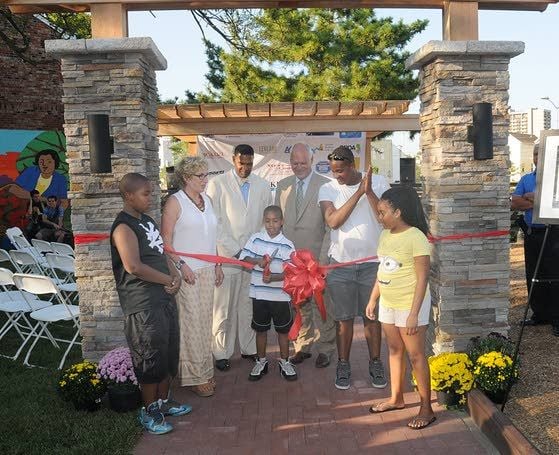 Nasir Tucker, 9, from Atlantic City, cut the ribbon during the dedication of a new playground and the garden area at Hamilton Memorial Garden. 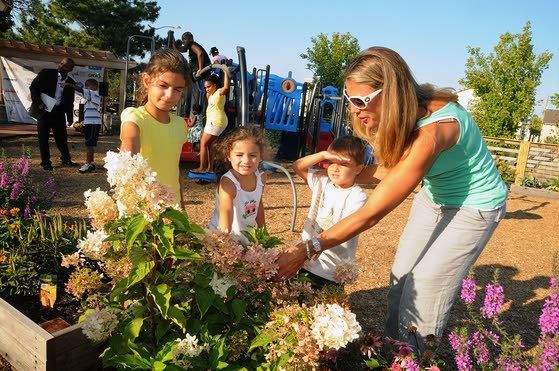 The DeRichie family, Isabella, 8, Giuliana, 3, John, 3, and mom Katie, all from the English Creek section of Egg Harbor Township, checked out the new playground and garden area.

Less than six months after the first shovelful of dirt was upturned from a weed-filled lot next to Hamilton Memorial United Methodist Church in Atlantic City, the resort's new community garden and park area celebrated its official opening.

Cookie Till, founder and president of A Work In Progress Foundation, the nonprofit organization that oversaw the project from start to finish, said the garden was dedicated in the name of hope.

"This represents the hope of Atlantic City and hope for the future," said Till, who invited everyone "who comes in peace and with an open mind and an open heart" to make use of the area.

Located adjacent to the church at the corner of Connecticut and Arctic avenues, the lot was the site all summer of a thriving 25-bed vegetable and flower garden. The finishing touches of the small playground, filled with new colorful child-sized equipment, and a park area with benches, picnic tables, pergolas, a gazebo and a small amphitheater, were completed a few weeks ago.

Members of the church, the surrounding community, invited guests and all the volunteers who worked on the project since it broke ground last March, attended the late afternoon dedication ceremony on Aug. 27.

Although the space was conceived by Till through A Work In Progress, the park and garden is maintained by volunteers under the guidance of the church. The project was funded by local grants, donations and the support of no less than 30 local businesses and community partners, who were all recognized for their contributions during the dedication ceremony.

The project also had the support of the city, which donated some ipe wood as material for the garden beds and fencing. The hardy wood is the same type used on the Boardwalk, which makes a symbolic connection between the park and the city, Till said.

In his welcome, Guardian said that projects such as this not only prove that "New Jersey is the garden state, but that Atlantic City is the garden city."

"This is how we rebuild in Atlantic City and teach our children what matters," he told the gathering. "If you helped make this little bit of heaven possible, I want to thank you from the bottom of my heart."

Still, who became the new pastor at Hamilton Memorial over the summer after the Rev. Jevon Caldwell-Gross was reassigned to a church in Montclair, welcomed back his predecessor with much praise. Caldwell-Gross worked closely with Till and her foundation since the planning stages of the garden.

"Sometimes you don't always get a chance to see the results of the seeds you planted, but this is one of those opportunities," said Still. "This is something for the whole community to be proud of."

Till said she remembers standing on the barren property last winter and said her guiding idea was to create a safe place for kids to play, a relaxing area where people could enjoy being outside and a garden that would provide fresh produce and food for the community.

"I've done community garden projects before, but this was more encompassing. The results were beyond my expectations, and I am truly amazed at what everyone accomplished," she commented.

Following the brief dedication ceremony, a generous amount of refreshments and appetizers were offered. Many of the items featured produce grown in the garden, such as zucchini bread, salsa and a variety of spreads that made good use of fresh grape tomatoes, cucumbers, lettuce, peppers, basil and flat-leaf parsley.

Nasir Tucker, 9, from Atlantic City, cut the ribbon during the dedication of a new playground and the garden area at Hamilton Memorial Garden.

The DeRichie family, Isabella, 8, Giuliana, 3, John, 3, and mom Katie, all from the English Creek section of Egg Harbor Township, checked out the new playground and garden area.