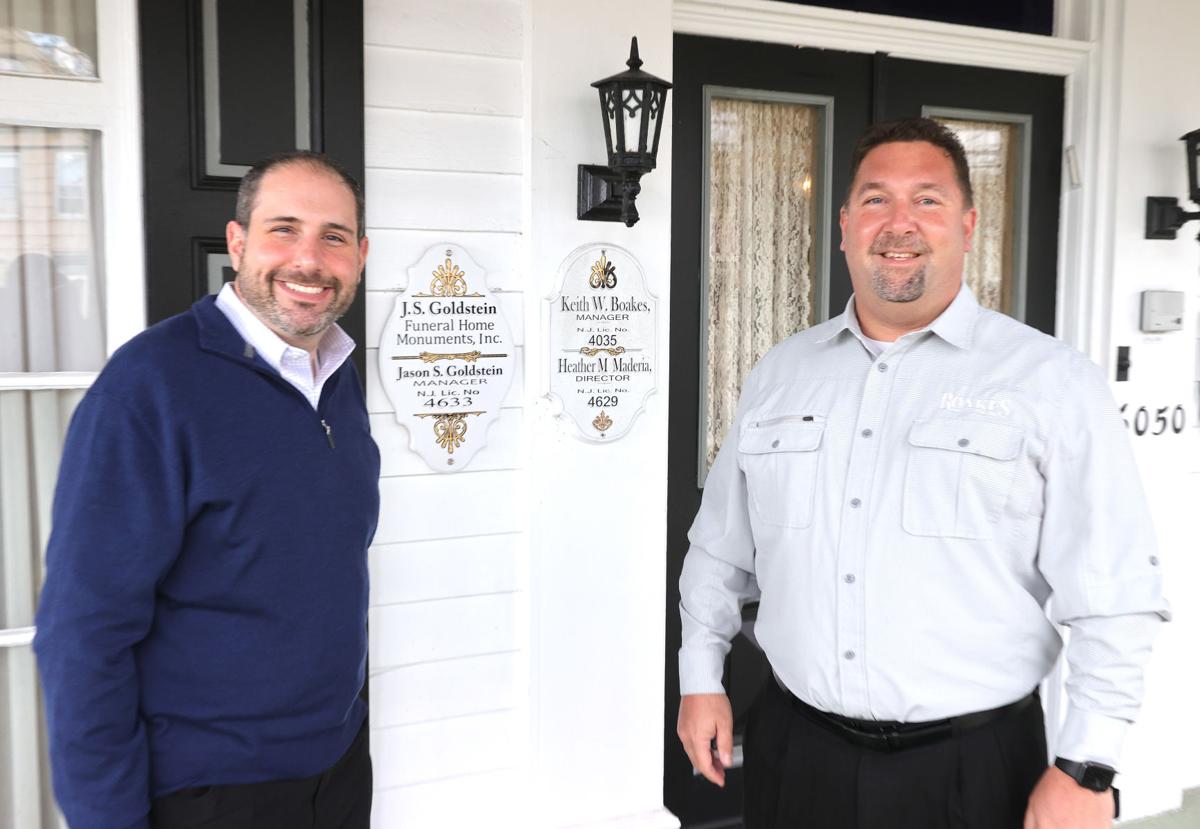 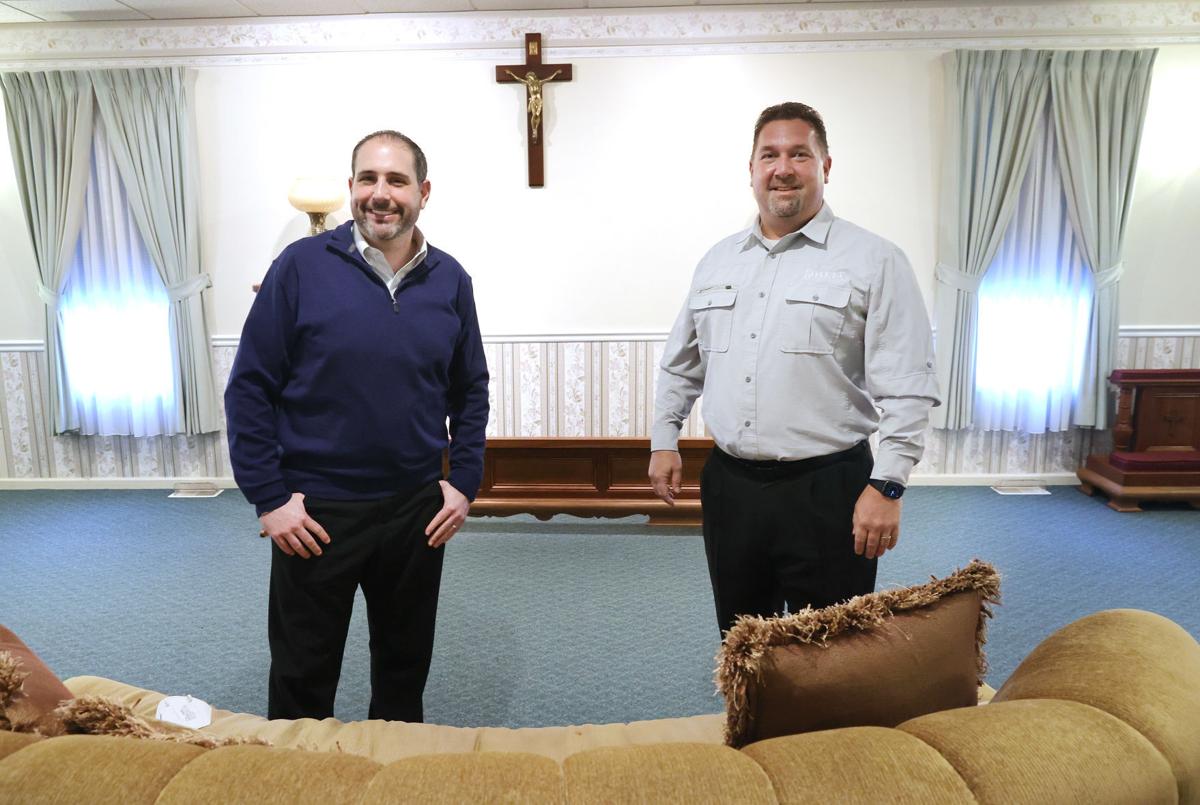 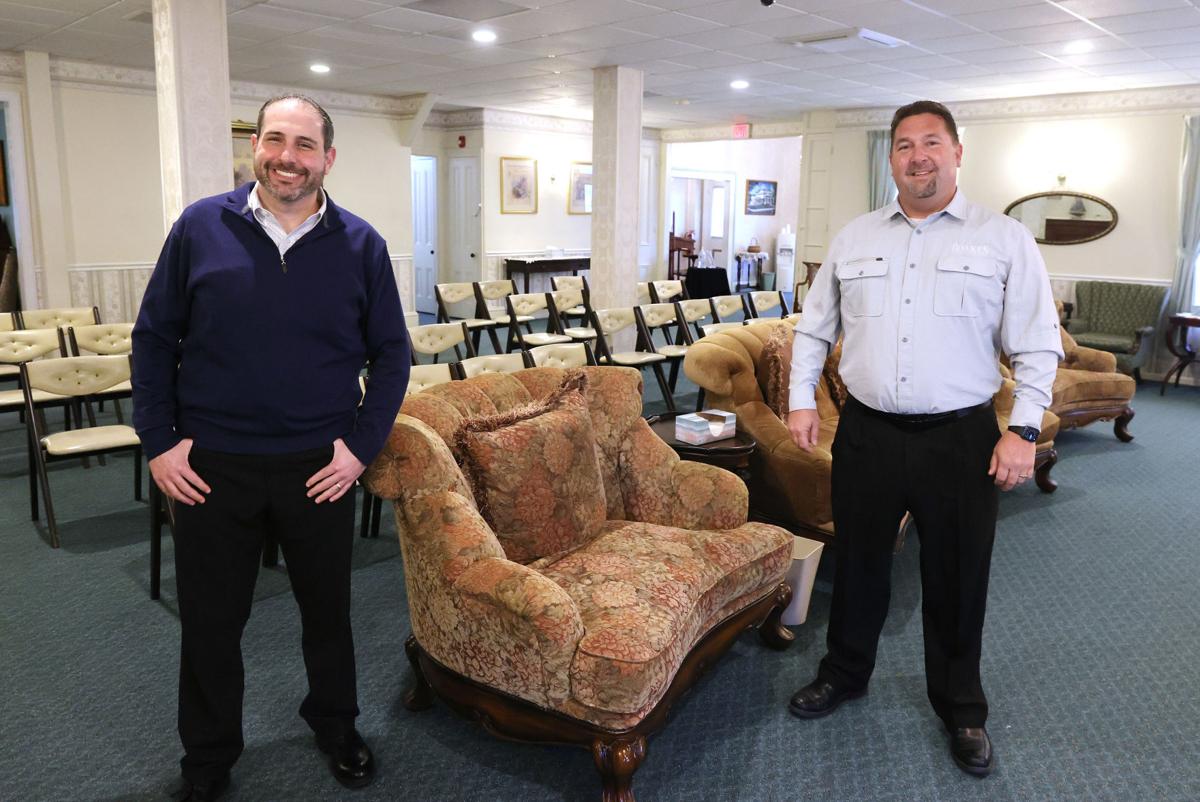 Keith Boakes, right, of the Boakes Funeral Home has partnered with Jason. S. Goldstein to share employees and a building in Mays Landing. Boakes says he wanted to help Goldstein get established in the business and ‘build a base of people, a reputation.’ 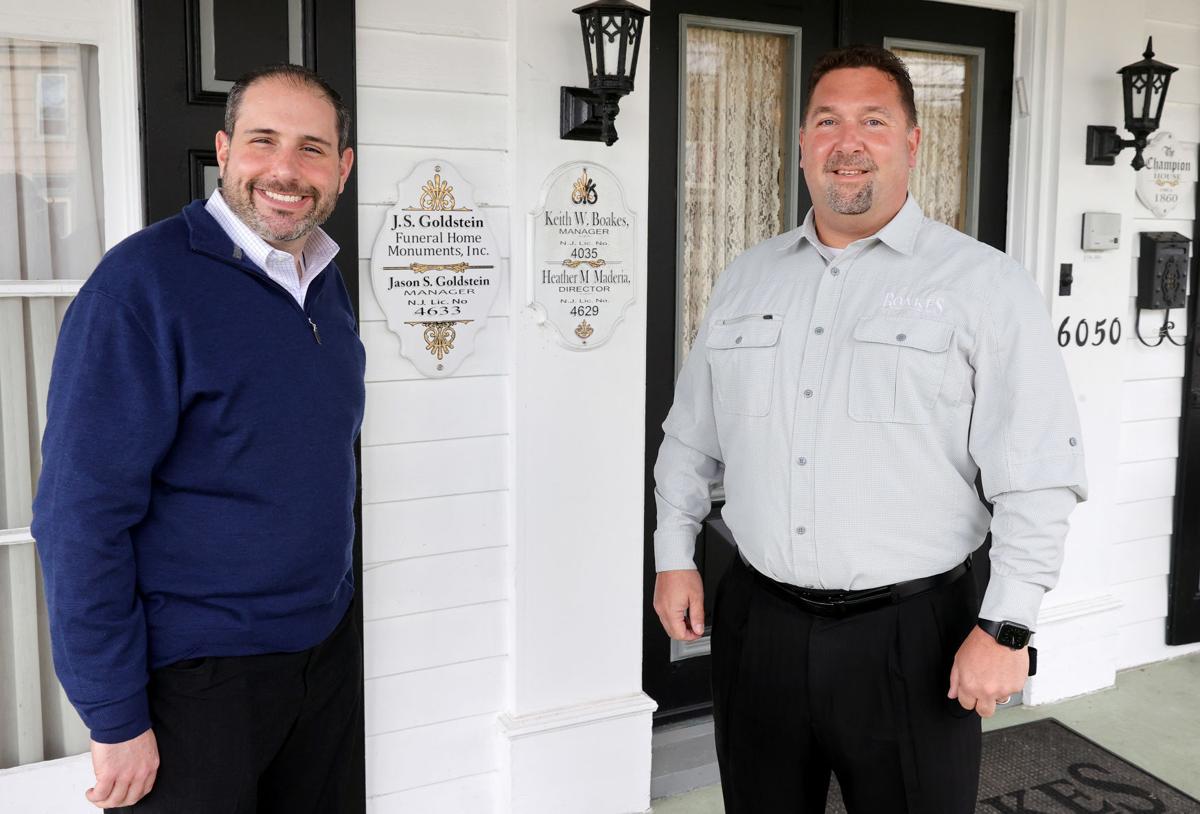 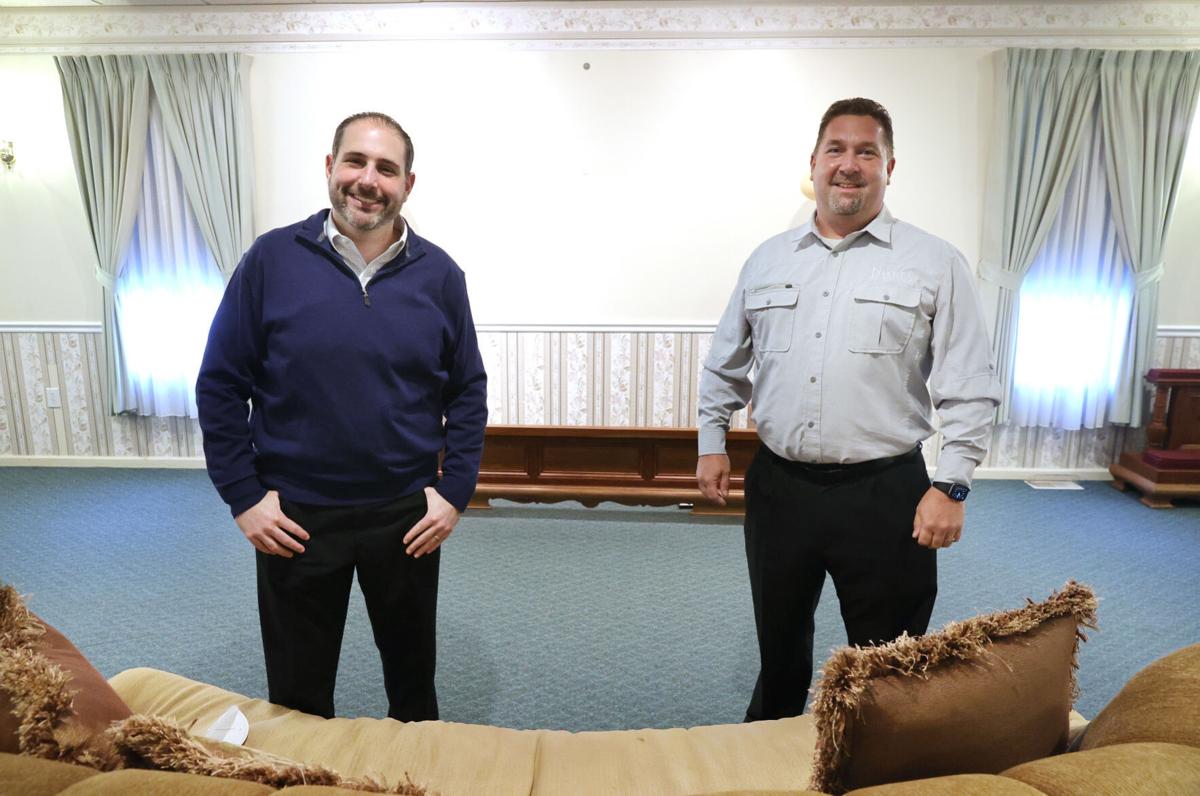 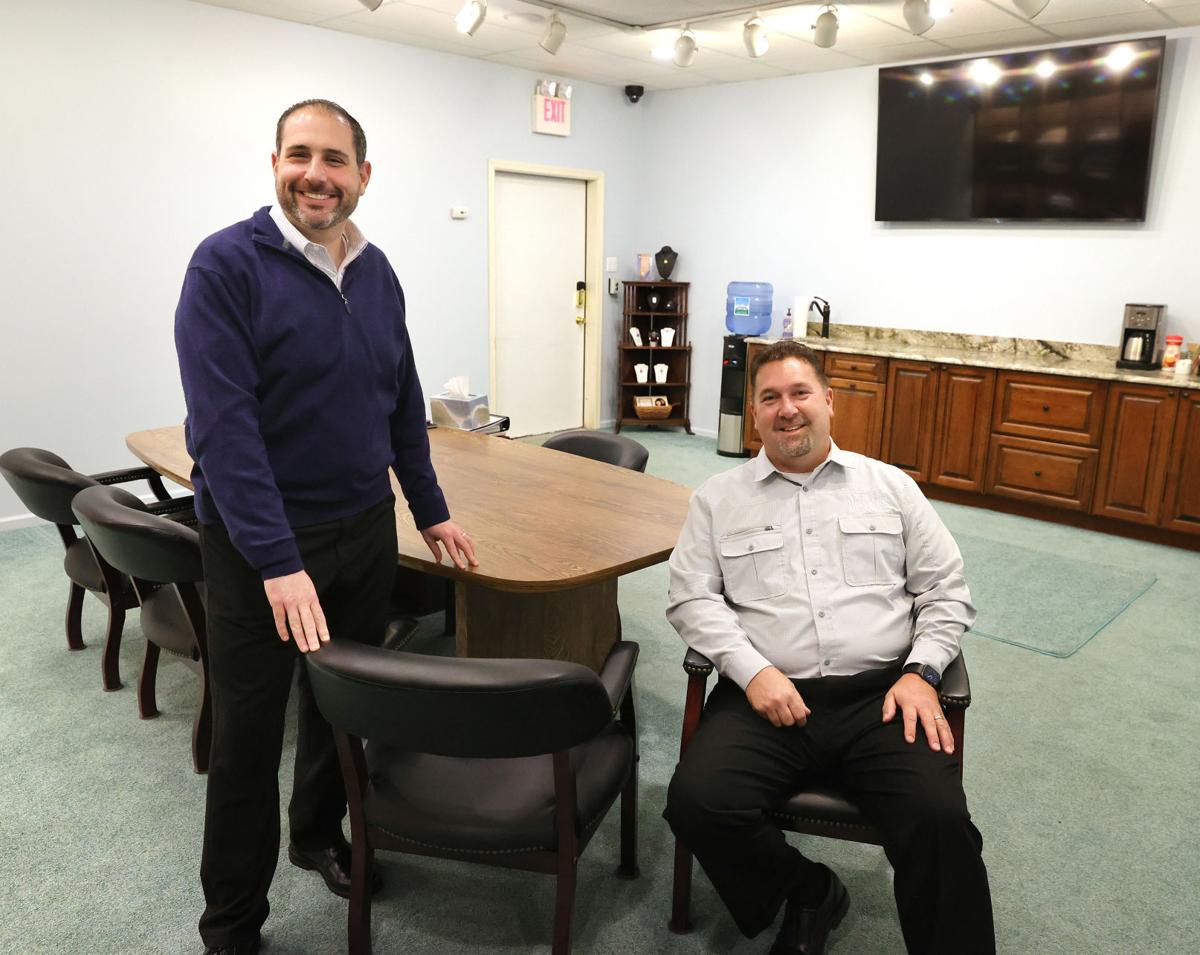 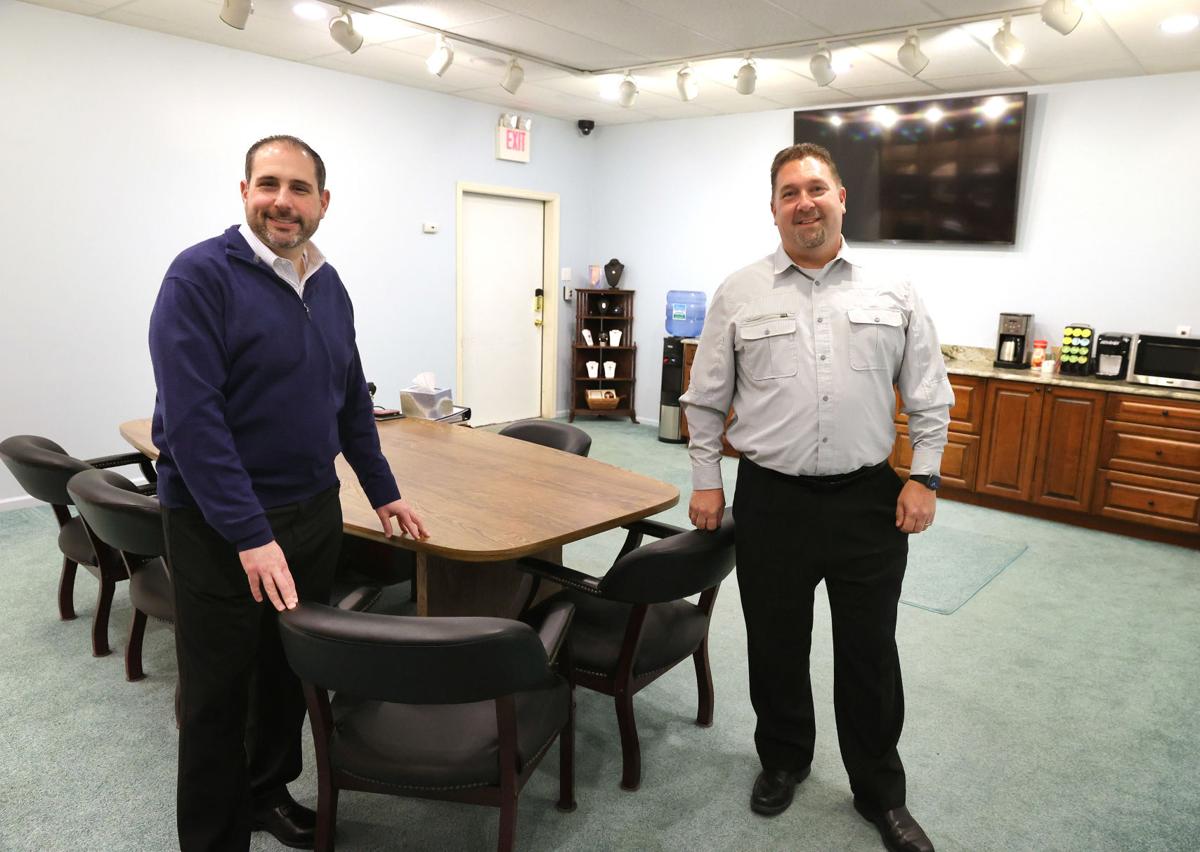 MAYS LANDING — Keith Boakes, the son of Elbert Boakes, may have never been introduced to the mortuary business if Inglesby & Sons Funeral Home in Camden County did not help his father, a former employee, branch out on his own in 1962 and establish the Boakes Funeral Home.

The men entered into a joint venture in August. Their two separate funeral businesses share the same building on Main Street, which is rare in South Jersey.

“I thought it would be a great opportunity rather than him taking on this giant overwhelming debt. Come and work here. Get yourself established. Get started. Build a base of people, a reputation, which he already does have. Once you are established and once you feel comfortable, then you can start your own,” Boakes said.

Funeral businesses sharing a building is something seen in the parts of New Jersey closest to New York City, according to the National Funeral Directors Association.

Jeff Van Drew voted against impeachment, but America just wanted to talk about his suit

Jeff Van Drew dressed for the occasion. As he always does.

“You may occasionally hear of a funeral director that offers specialty services (e.g. green funerals) operating out of an office in an established funeral outside of this area, but it’s not something that’s common throughout the U.S.,” said a National Funeral Directors Association spokesperson.

Two or three funeral homes sharing one building is common in Central and North Jersey because of the cost of real estate, said George Kelder, CEO of the New Jersey State Funeral Directors Association.

“This has to be one of the first. This is unusual in South Jersey,” Kelder said. “They will each have their own pricing, but they will be working off the common expenses.”

Goldstein is a fourth-generation funeral director who ran his family’s business, Roth-Goldsteins’ Memorial Chapel LLC in Atlantic City, for many years.

After at least three years as manager with 10 partners, Goldstein felt it was time to branch out on his own and take the Jewish funeral, the culture he serves, to the next level.

Goldstein attended mortuary school with Heather M. Maderia, Boakes’ funeral director. Boakes said the two businesses sharing the same building has been a great thing, and the businesses complement each other.

“We are both here for the same reason, to serve our people and serve the community,” Boakes said.

For Goldstein, the mainland location in the center of the county is ideal because he is close to the Rodef Sholom and Beth Kehillah cemeteries, both in Egg Harbor Township, and the Vineland Hebrew Cemetery.

The building was already large enough to accommodate both businesses, so it did not have to be renovated, but Boakes had already planned technology upgrades for his business.

For Jewish funerals, most of the activity is either at the synagogue or at the gravesite. Goldstein said he does meet with families at the funeral home to make arrangements, and sometimes, there are private services.

TRENTON — With just 11 days to go until Thanksgiving, Gov. Phil Murphy on Monday set a limit…

Goldstein is in business by himself, but Boakes shares his six employees with Goldstein. They also share vehicles, the parlor, the arrangement room and the chapel where a cross, crucifix or a six-pointed Star of David can be put on a wall depending on what is needed.

“During these times, don’t look at other businesses as competitors,” Boakes said. “You’ve got to help the mom-and-pop shops right now. They are disappearing so fast.”

Get ready for ‘supercharged’ economy after pandemic

Get ready for ‘supercharged’ economy after pandemic

ATLANTIC CITY — The Police and Fire Departments safely rescued a dog that fell into a hole on the States Avenue Beach on Jan. 18, according to…

Atlantic City's Jill Collette known for walking all over resort, involvement in church and school

ATLANTIC CITY — Jill Collette had the kind of smile that would “let you know someone cared about you.”

In a sweeping move to drastically change the Camden School District, Superintendent Katrina McCombs on Tuesday announced a plan to close four …

The former king of Spain was a Jersey guy, and his estate is being turned into a park

BORDENTOWN — At the crest of a windswept bluff overlooking the confluence of Crosswicks Creek and the Delaware River, Joseph Bonaparte — oldes…

Eleanora L. Cheney, an educator and a philanthropist in South Jersey, dies at 97

Eleanora L. Cheney, 97, of Marlton, formerly of Haddonfield, an educator and a philanthropist, died Thursday of renal failure at her home.

Area Veterans Day ceremonies still on, but will look different due to COVID-19

While multiple Veterans Day ceremonies will be held Wednesday in South Jersey, they will look slightly different due to the COVID-19 pandemic.

Keith Boakes, right, of the Boakes Funeral Home has partnered with Jason. S. Goldstein to share employees and a building in Mays Landing. Boakes says he wanted to help Goldstein get established in the business and ‘build a base of people, a reputation.’