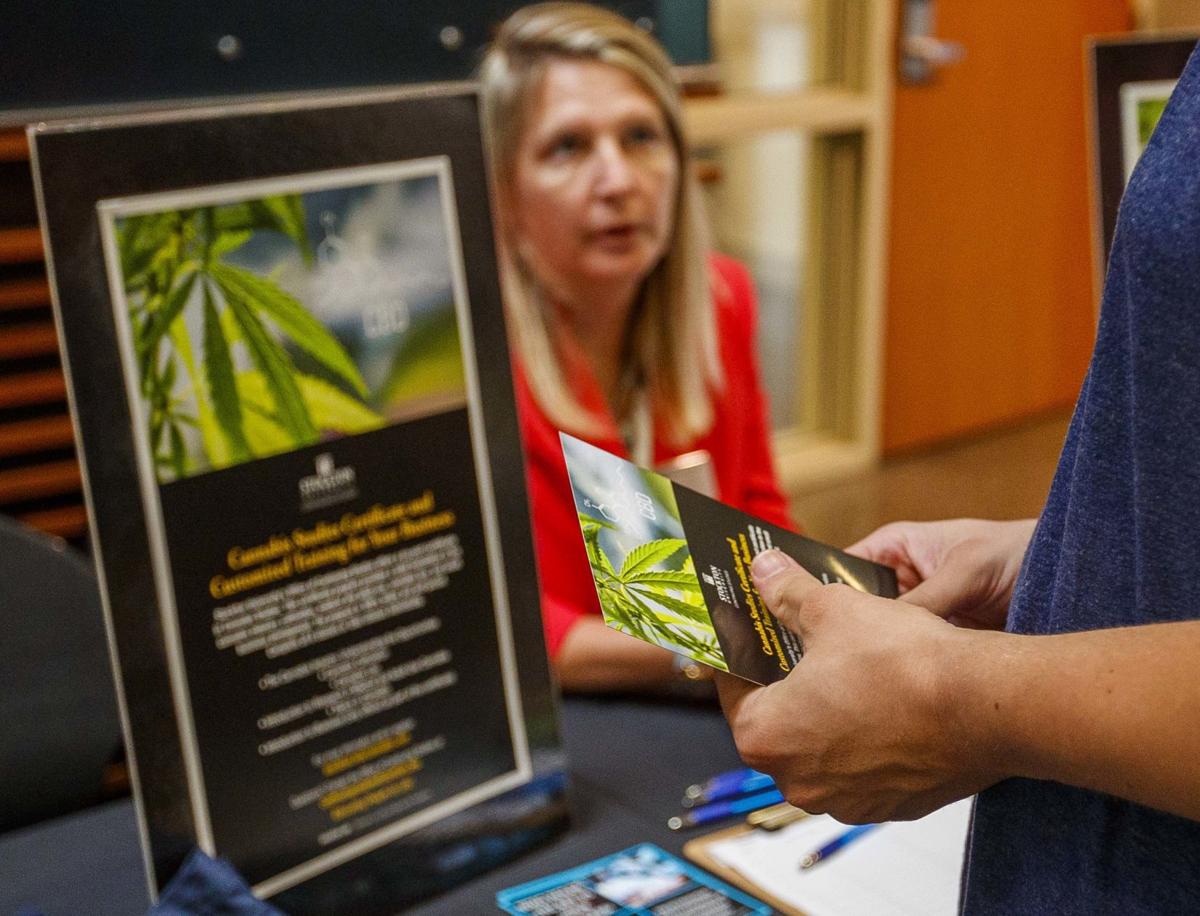 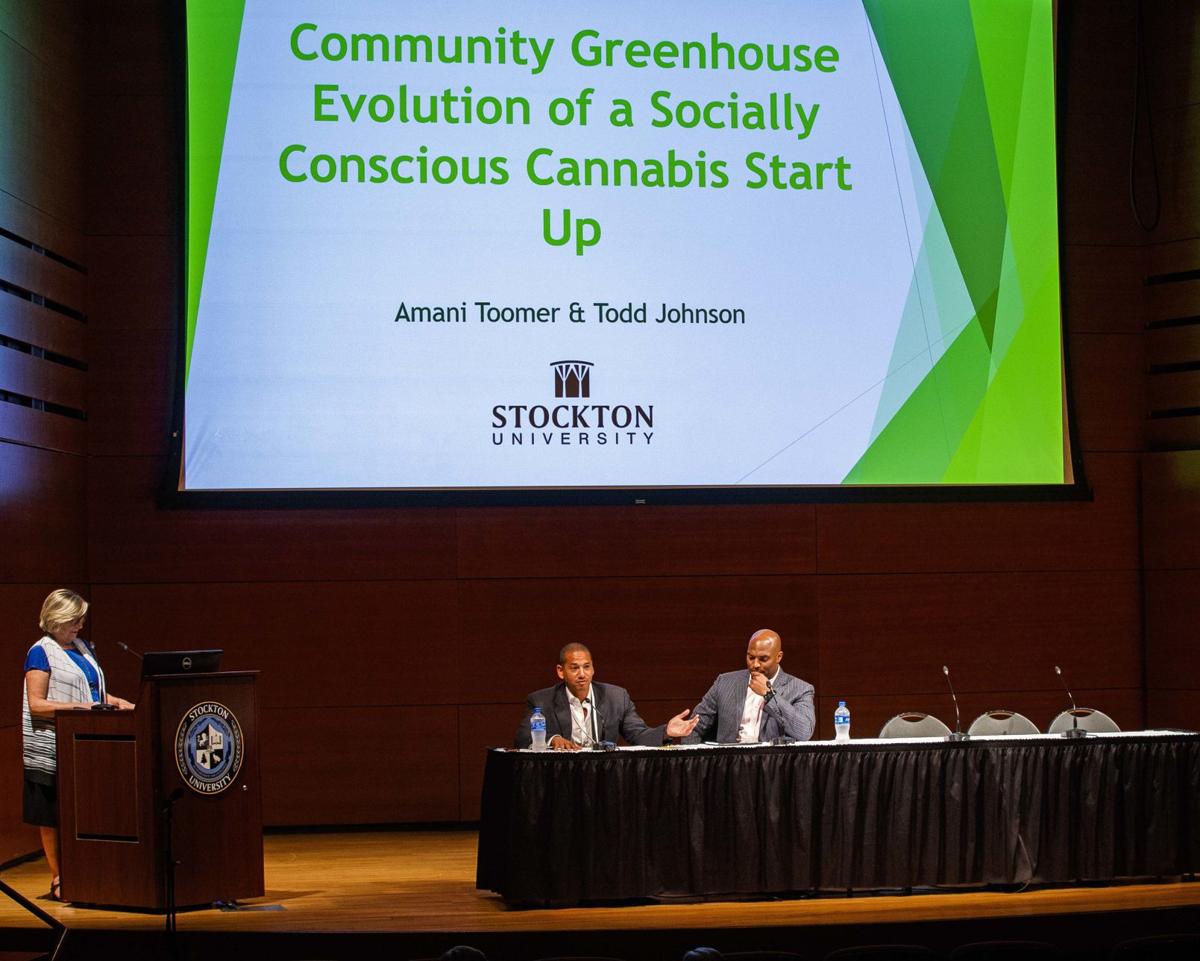 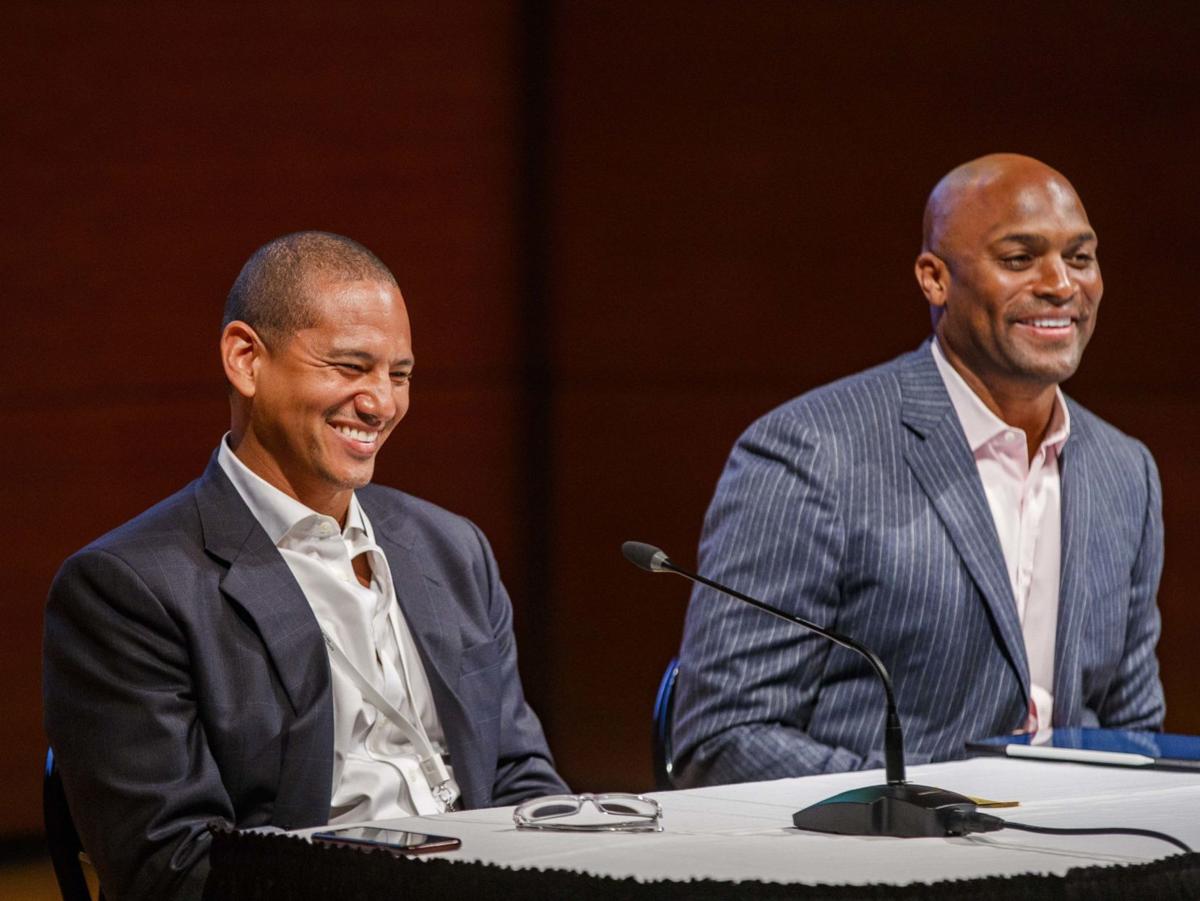 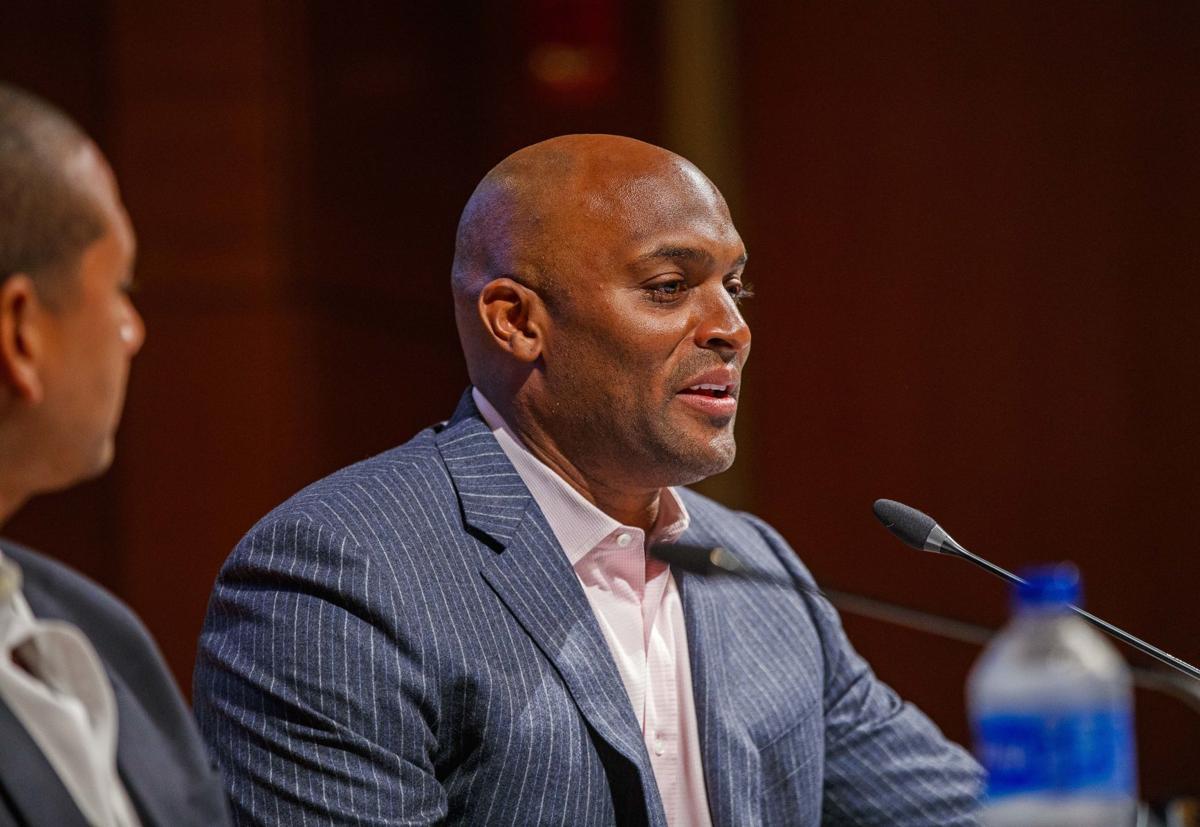 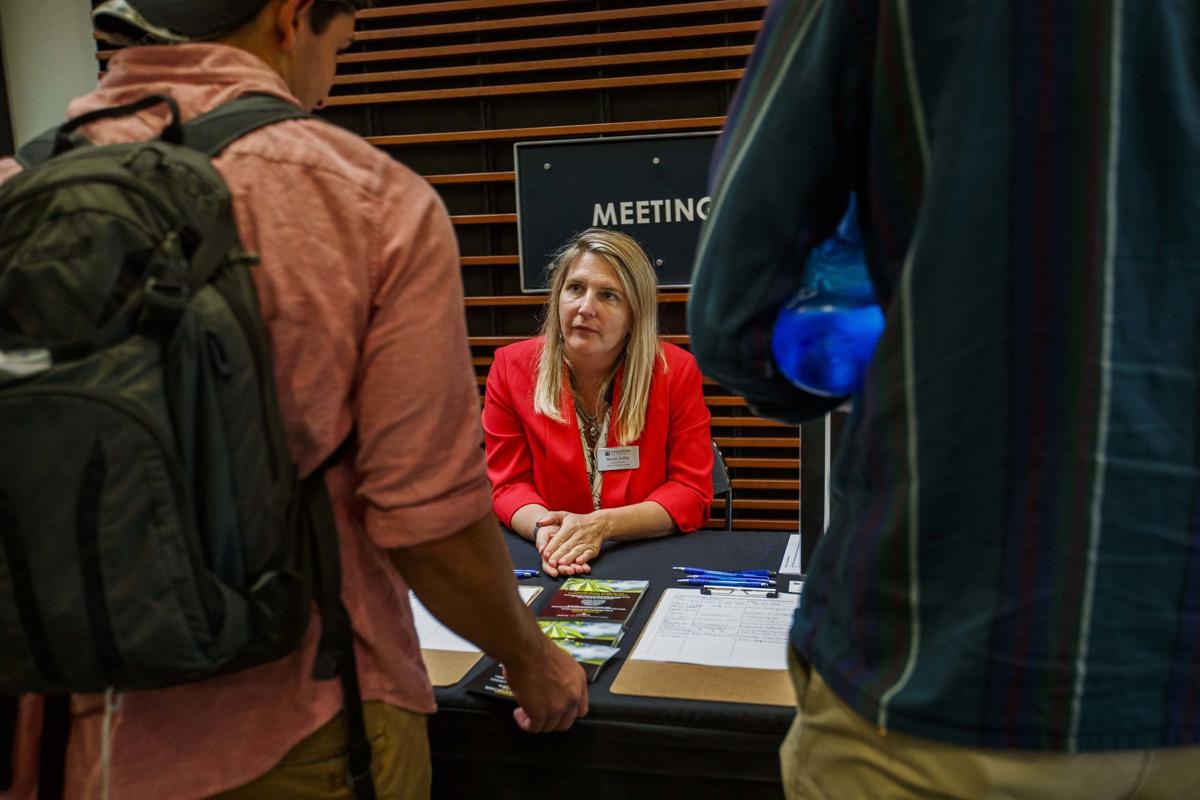 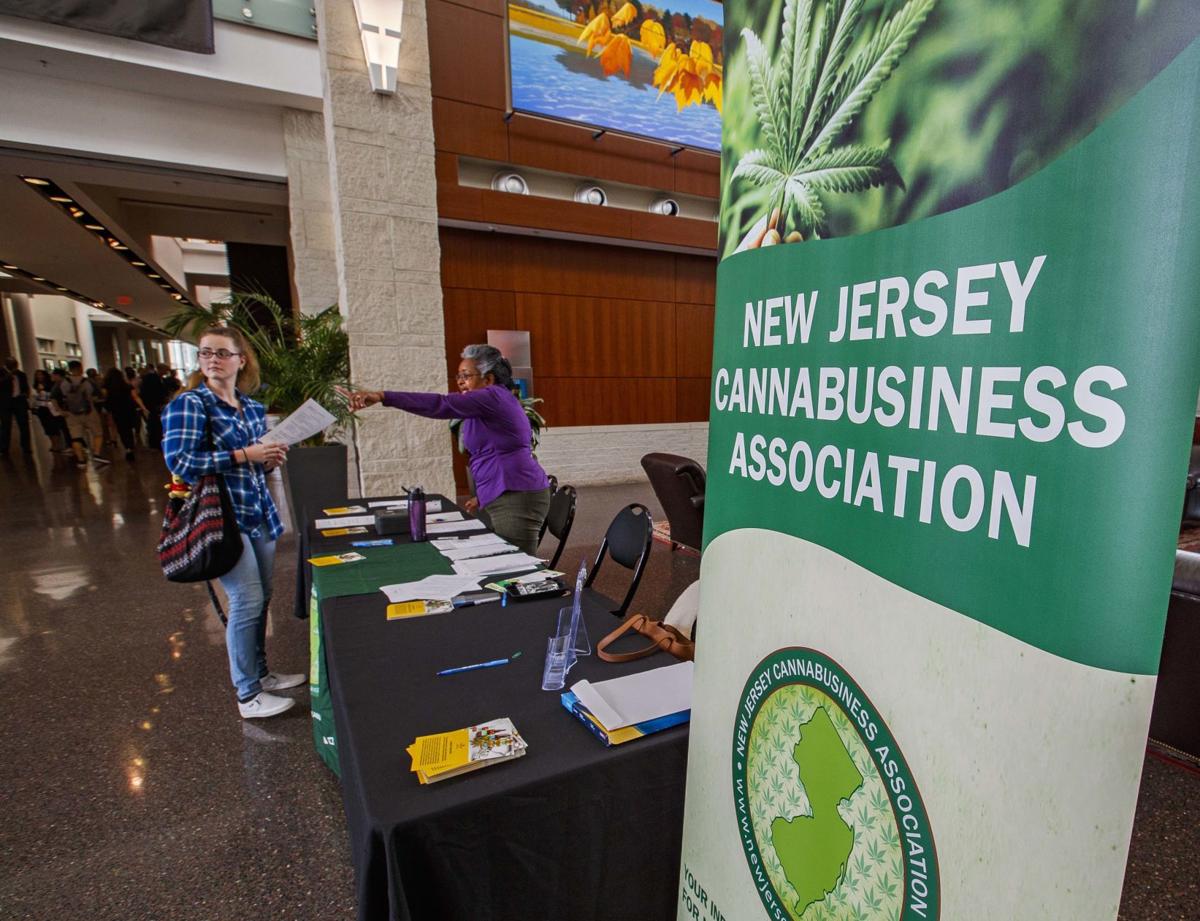 Stockton University senior Kayla Johnson, 23, of Absecon, picks up info from Yolanda Lively upon entering the Cannabis Career Fair and Business Expo on Friday at the college in Galloway Township. 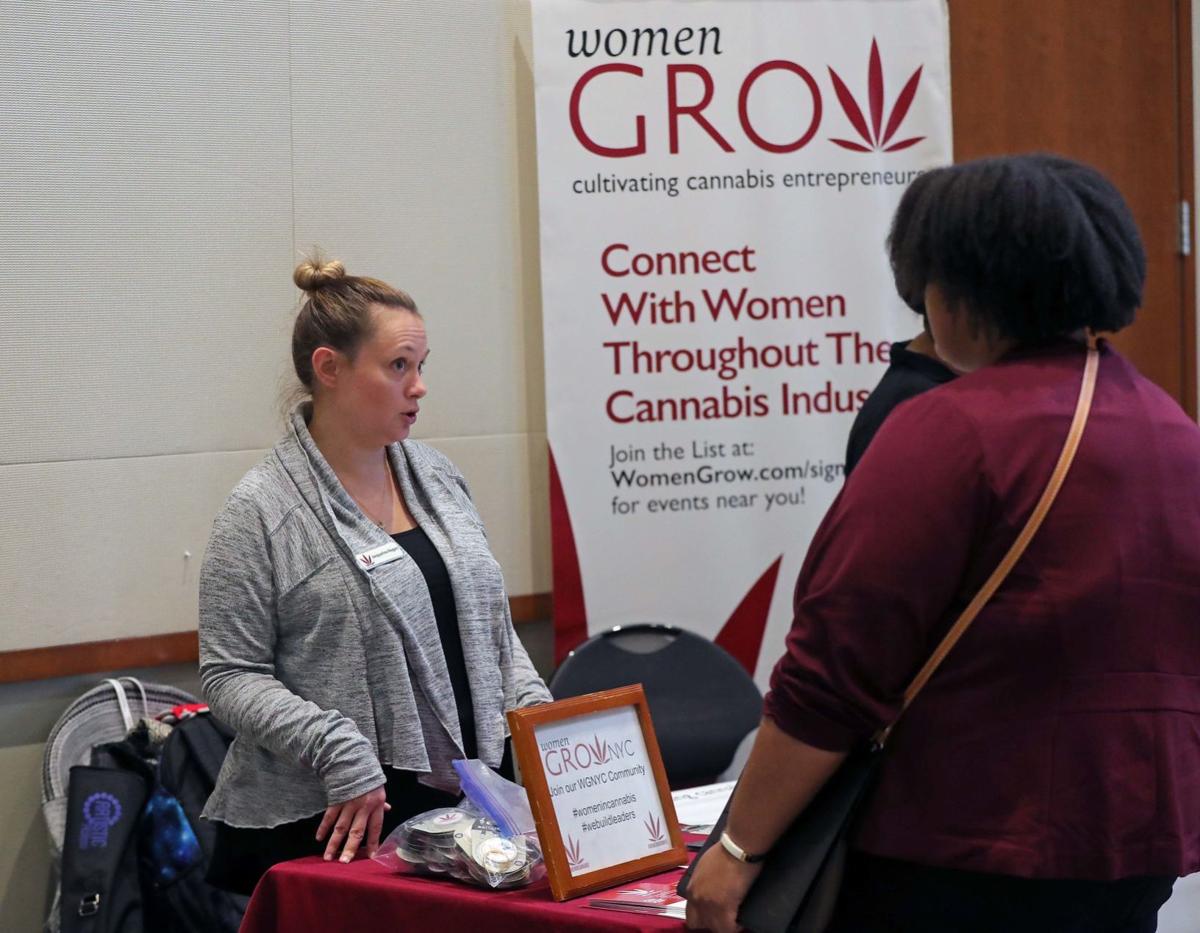 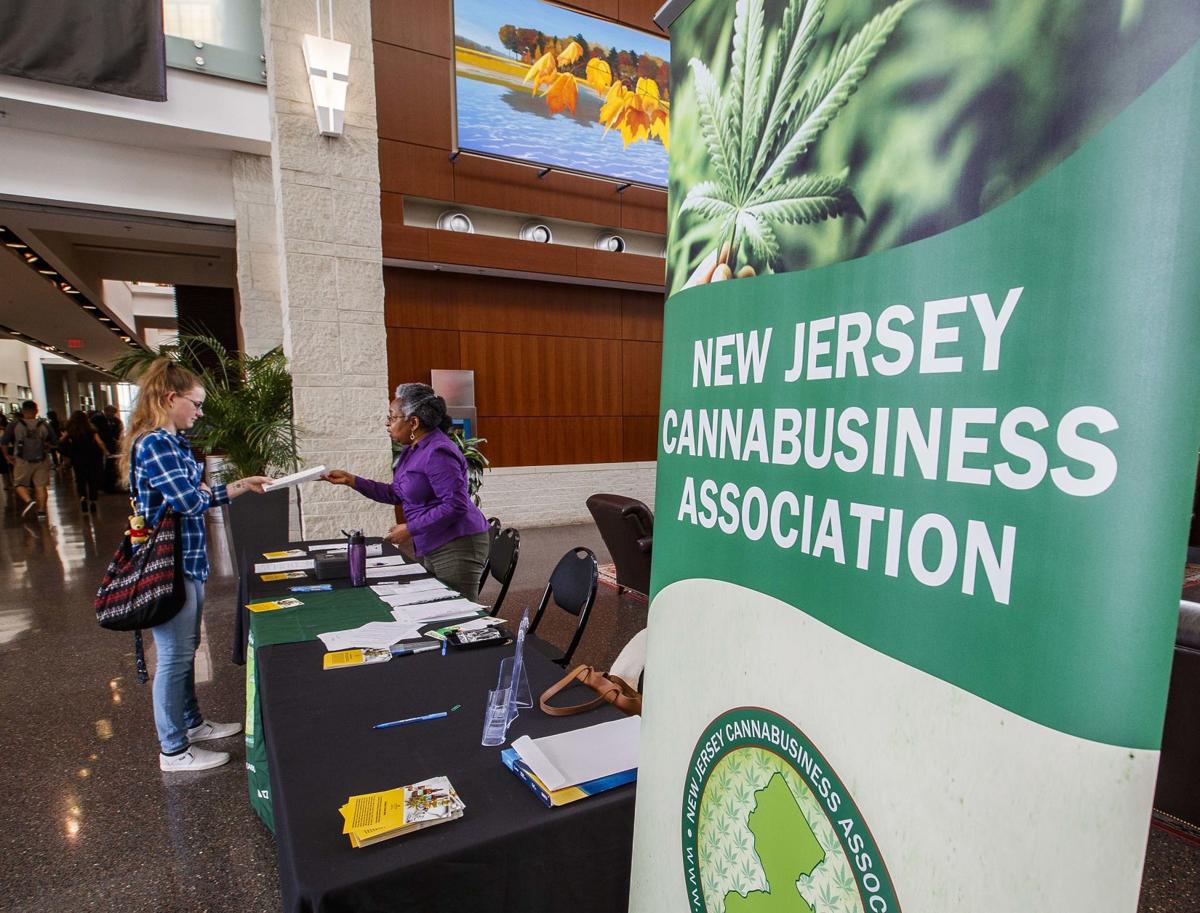 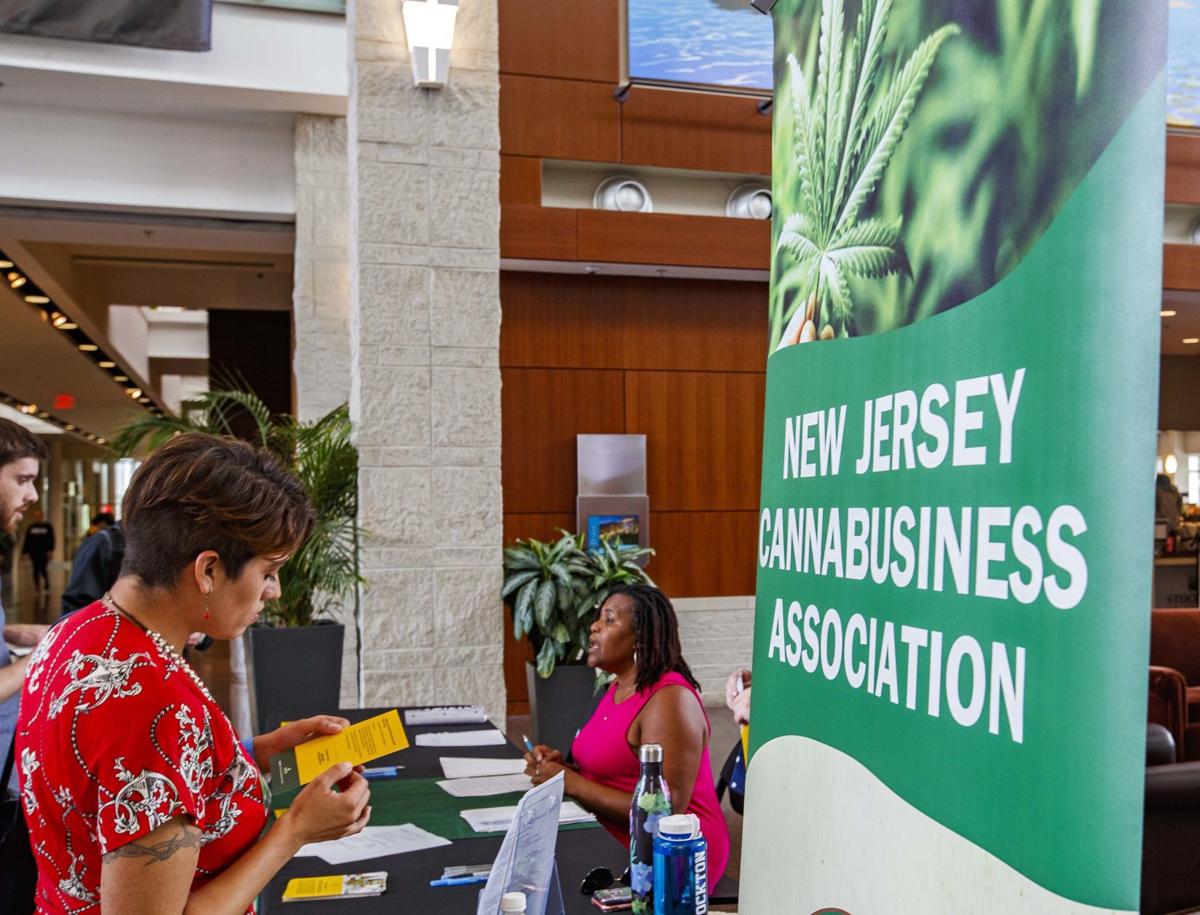 What would have once been risky behavior is now a networking opportunity. At a cannabis industry fair at Stockton University, students mingled with employers and vendors. Those interested in the subject range from business students to environmental studies students, said Ekaterina Sedia, coordinator for the school’s Cannabis Studies program.

“We get a really good mix of majors coming into this minor,” Sedia said. “There seems to be a lot of people kind of realizing, ‘So, OK, here’s this new industry. With the degree that I already have, and this new minor, I will be able to find the niche, still kind of working in my field but within this kind of new umbrella.”

Friday’s Cannabis Career Fair and Business Expo, the first of its kind at the school, was hosted by the Cannabis Studies program and the New Jersey CannaBusiness Association.

It’s not the only cannabis event in the area this weekend.

The first New Jersey Cannabis Convention will be held Saturday and Sunday at the Atlantic City Convention Center, with more than 100 companies attending and showing off their product lines. An after party Saturday night at Bourre on New York Avenue will include samples of CBD snacks and drinks. CBD, or cannabidiol, is a cannabinoid usually extracted from the cannabis cousin plant hemp that, unlike THC, does not make the user high.

Taken together, the speakers, vendors and interest among attendees signaled the growing legitimacy of the industry, and fast-changing opinions on a once-controversial issue. New Jersey collected $3.31 million in tax revenue in 2018 from more than $53 million in medical marijuana sales, according to the state Department of Treasury, and there are more than 45,000 patients in the program.

Beyond employment opportunities, the subject of social justice was a common theme among fairgoers Friday.

Henry Green, a host and owner of New Jersey Revolutionary Radio, said he’d like those disproportionately hurt by marijuana’s prohibition to take advantage of the burgeoning industry.

“We want people to be enlightened to what’s coming down the road, especially in minority communities,” Green said.

While students, vendors and employers traded cards and thoughts on the ascendancy of the industry Friday, Trenton worked this week on legislation to curb some of the effects of the criminalization of marijuana.

A bill that would allow for expungement of low-level marijuana convictions did not see the vote it was scheduled for Thursday. In a Q&A session after his keynote speech at the fair, state Sen. Troy Singleton, D-Burlington, said the Legislature and the governor are still working through the measure’s language. However, the Senate is not scheduled to meet again until November, so no action will take place until then, Singleton said.

“Before the end of our legislative session ... we’ll see that expungement bill on the governor’s desk,” Singleton said.

Singleton also addressed a question regarding municipalities fighting statewide change with local ordinances aimed at hamstringing cannabis in New Jersey. As the issue of legalization looms, local not-in-my-backyard ordinances will result in a map that is fractured, “cut up, almost in a surgical way,” he said.

To combat that, activists and businesses will need to re-educate voters and officials after decades of anti-marijuana messaging, Singleton said.

“Our ‘locals only’ laws and the way we look at it — that will not change,” Singleton said. “Again, the concept that we can change is trying to get the communities to realize, for a local elected official to say, ‘You know what, I can stand up and say it’s OK to have this facility, this safe facility in our community,’ and not fear reprisal at the ballot box.”

Toomer said he co-founded the company because he wants to do something that can benefit under-represented communities. He said he’s invested in Colorado but wants to make an impact in New Jersey.

On Friday, a trustee of Stewart Rose Farms in Vermont had examples of their hemp buds, salves and bath bombs on display a few tables down from United Food and Commercial Workers Local 152, which had marijuana flower grinders with the union’s logo on them. In the other room, Canna Care Docs, a medical marijuana company with six clinics in the state, including one in Linwood, fielded questions from students.

Dana Belka, regional marketing manager for Canna Care Docs, said she’s never worked in a field with the trajectory that cannabis has.

MILLVILLE — Divorce, death of spouse or even the desertion of a loved one can plunge a woman into poverty.

ABSECON — Lucia Corso looked nervous at first as she approached the mound Saturday at the South Jersey Field of Dreams.

ATLANTIC CITY — Police are seeking suspects in a shooting and a stabbing that each took place Friday evening.

GALLOWAY TOWNSHIP — Stockton University experienced another year of growth as it works toward its goal of 10,000 students by next fall.

Stockton University senior Kayla Johnson, 23, of Absecon, picks up info from Yolanda Lively upon entering the Cannabis Career Fair and Business Expo on Friday at the college in Galloway Township.