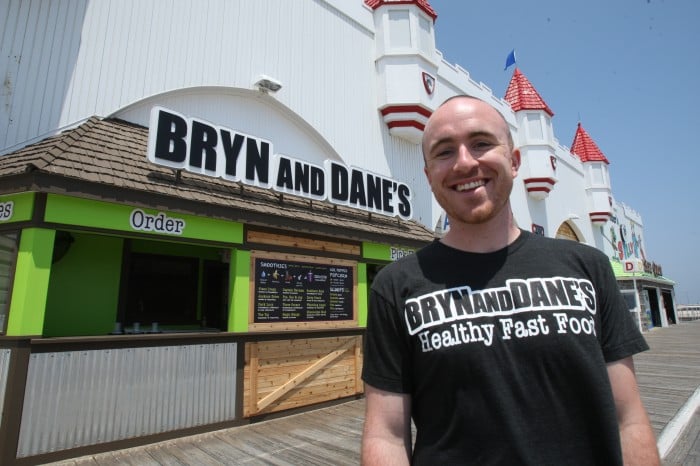 Bryn Davis stands in front of his new location of Bryn and Dane's on the Ocean City Boardwalk on Friday, May 27. He said he started with food items people love and figured out how to make them healthy, rather than take healthy things like tofu and try to get people to like it. 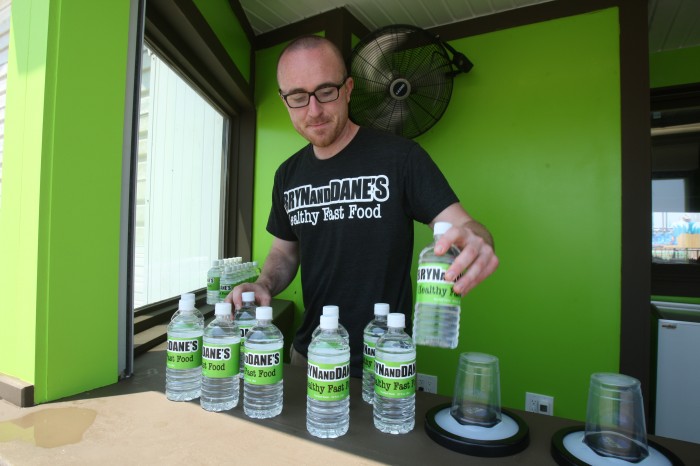 A worker at Bryn and Dane's organizes water bottles on Friday, May 27. Instead of soda, the restaurant has eight unsweetened ice teas, including green pomegranate, peach, black chai and red rooibos. 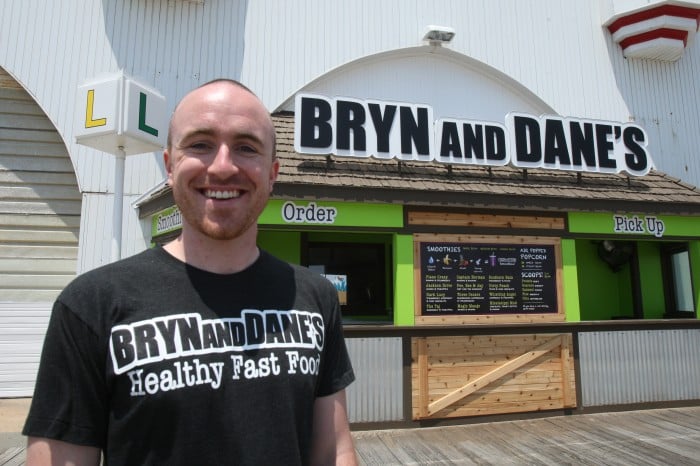 Bryn Davis opened the new location on May 21, 2011.
By KEVIN POST Business Editor

Bryn Davis thinks of his new store on the Ocean City Boardwalk as healthy fast food.

Bryn and Dane’s restaurant, named also for his teenage brother Dane Hoffmann, is his second after one in Horsham, Pa., where he lives.

There the healthy fast food concept is so popular that Davis had to stay and work this week, even as his Ocean City location prepared for its opening today.

“Wednesday is so ridiculously busy I couldn’t leave them here by themselves,” Davis said of his staff. “In the summer I’ll split my time, with weekends in Ocean City.”

What makes his menu of wraps, salads, iced tea, smoothies and popcorn so popular, he said, is that it indulges instead of preaches.

“I take wraps that people already love and make them healthy, rather than take healthy food and try to make people like it,” Davis said.

Trying to make guys like things like tofu only alienates them, which is the last thing a restaurant wants to do, he said.

“The best customers you can have are male workers. Once they find what they like, you’ll see them for the next 20 years,” he said.

Making the food healthy involved finding organic, low-fat and high-fiber versions of ingredients and creating blends and sauces that delivered the taste without the calories.

So a Southern Barbecue wrap has a whole wheat tortilla and cheese from California, romaine lettuce, onions and grilled organic free range chicken, with Bryn and Dane’s smoky barbecue sauce.

Davis said all of their menu items can be prepared vegetarian by substituting veggie burger or black-bean burger for the chicken.

Smoothies all are based on banana to avoid yogurt and ice cream, he said, and the best selling Dark Lucy adds agave nectar, almond milk, raspberries, strawberries and dark chocolate.

“We just got Weight Watchers certified, so now you can know how many points all of our products are,” Davis said, adding that most smoothies are zero points and a few are 1 point each.

“The second we got certified, the number of Weight Watchers followers who came in was crazy,” he said.

Davis was motivated to create healthy fast food by watching his own weight soar to 236 pounds when he was in college.

He started the Horsham location (and trimmed down to 175 pounds) after college with just $12,000 he saved up from working on his uncle’s farm, he said.

For his Ocean City location, he’s drawn on his experience working at Disney World in Orlando while in college to create what he believes will be the “coolest looking thing on the Boardwalk.”

The Bryn and Dane’s shack in front of Gillian’s Wonderland amusements has misters that spray a light fog, which Davis said will keep patrons cooler during the day.

At night, LED lights behind the misters will give the place a glow.

Davis said his fiancee, Tina Bucci, will run the restaurant, with the help of another brother, Shea Hoffmann.

Davis, 26, said he’s already planning to open two more of the restaurants in 2012.

“I’m the only investor. Every dollar I get I put into the next one,” he said.

“I figure when I’m 30 I can worry about paying myself.”

How to have financial flexibility

How to beat your summer ‘revenge shopping’ debt

If your summer of “revenge” spending has come for a payback of its own in the form of lingering debt, make a plan for paying it off. Also, check out more of the week's best money tips from experts.

Is the program's impending financial doom just a rumor, or reality?

Use of OxyContin profits to fight opioids formally approved: Briefs

EGG HARBOR TOWNSHIP — Thirteen South Jersey residents who were recently hired by Global Crossing Airlines, aka GlobalX, to serve as its first …

SEOUL, South Korea – South Korea has reported more than 2,000 new cases of the coronavirus, nearing a one-day record set last month, continuing an alarming surge as the nation enters its biggest holiday of the year.

Either or both of these flexible, pet-friendly Margate condos can serve as vacation digs and/or a source of rental income

For the buyer in search of an affordable, income-generating property that can also be used as a convenient Jersey Shore vacation place (or, fo…

Bryn Davis stands in front of his new location of Bryn and Dane's on the Ocean City Boardwalk on Friday, May 27. He said he started with food items people love and figured out how to make them healthy, rather than take healthy things like tofu and try to get people to like it.

A worker at Bryn and Dane's organizes water bottles on Friday, May 27. Instead of soda, the restaurant has eight unsweetened ice teas, including green pomegranate, peach, black chai and red rooibos.

Bryn Davis opened the new location on May 21, 2011.
© Copyright 2021 The Press of Atlantic City, 1000 West Washington Ave. Pleasantville, NJ | Terms of Use | Privacy Policy
Powered by BLOX Content Management System from TownNews.com.
You don't have any notifications.