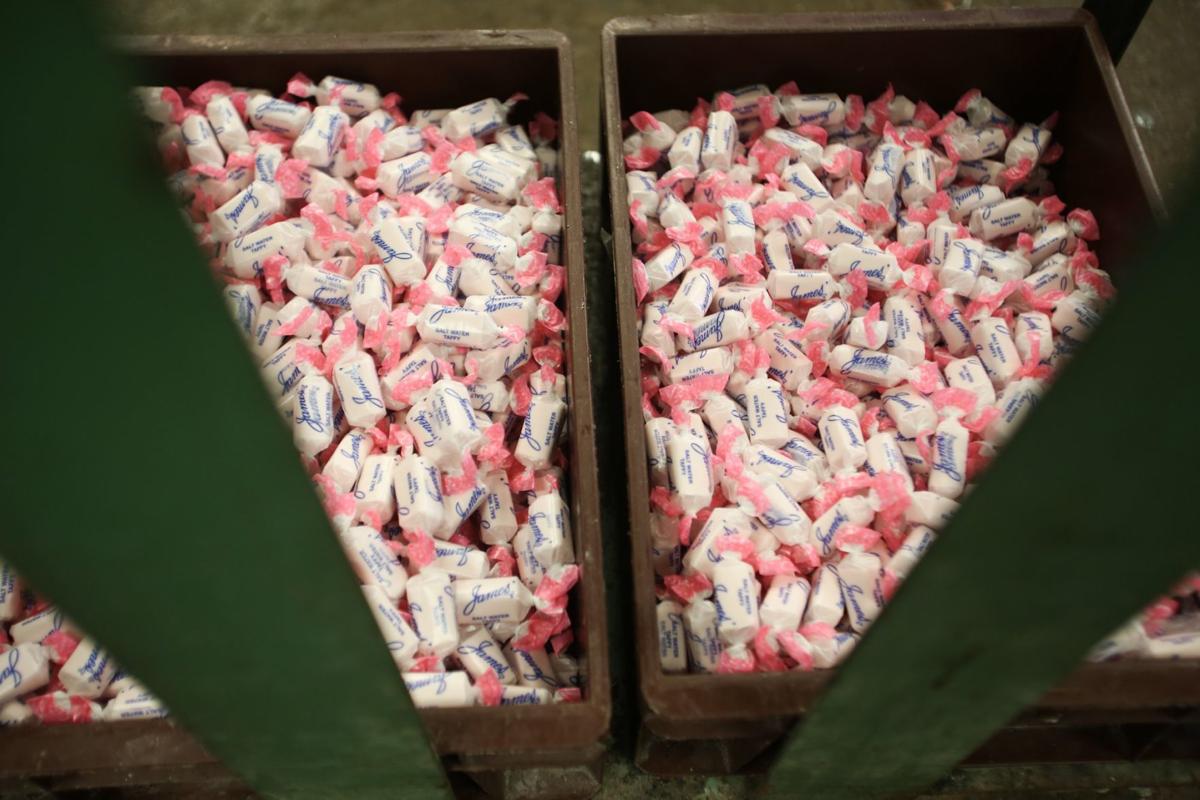 A box of strawberry taffy sits on the fourth floor, where taffy is made, at the James Candy Factory on the boardwalk in Atlantic City, on Monday, Aug. 6, 2012. (Press of Atlantic City/Andrew Renneisen) 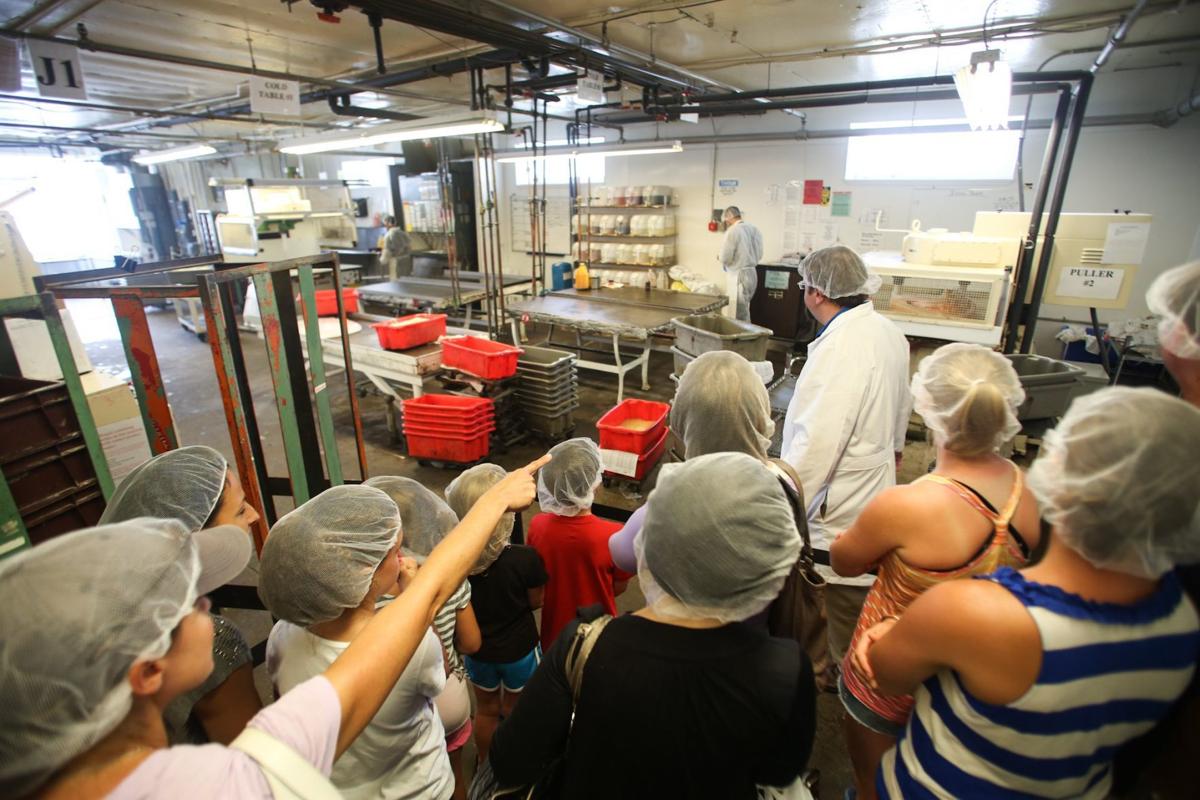 Levi Fox, creator of tour and tour guide, talks to his tour group on the fourth floor, where taffy is made, in the James Candy Factory on the Atlantic City Boardwalk, on Monday, Aug. 6, 2012. (Press of Atlantic City/Andrew Renneisen) 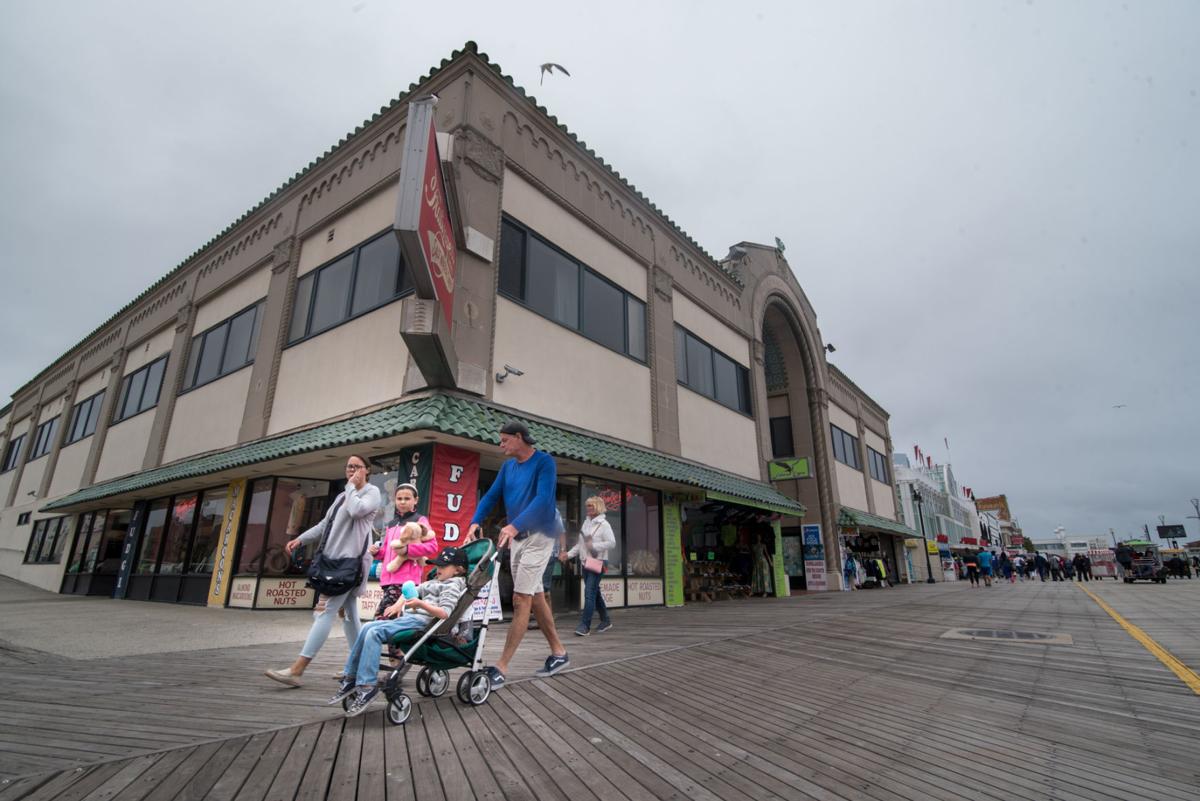 ATLANTIC CITY — The 138-year-old James Candy Co. has filed for Chapter 11 bankruptcy protection for the first time in its history, citing this summer's rainy weather as the final factor after more than a decade of declining Boardwalk visitors and sales.

"When you have the weather patterns we had this summer — our business was just very affected," said Chief Operating Officer Lisa Glaser Whiteley. "And the cost of doing business doesn't change, except to go up."

James Candy Co. is owned by the Glaser family. It has 11 retail outlets in the mid-Atlantic region, including locations in Atlantic City, Ocean City, Wildwood and Cape May, and has a national wholesale and direct mail-order business. Its brands are James Confections, Fralinger's Salt Water Taffy and Bayard's Chocolate Stores.

"We have been here a very long time as a family-owned business," Whiteley said. "We have very good relationships in the community and industry and have proactively communicated this situation to many of our vendors, who are continuing to work with us."

She said there will be no changes in operations or product fulfillment during and after the 2018 holiday season.

"The company plans to continue payment of employee wages, benefits, vendors and suppliers in the ordinary course for all goods and services provided on or after the filing date," said a news release from the company.

Whiteley said most of the company's raw materials suppliers are not local companies.

The spring and summer were both rainy this year, she said, resulting in a sales decline of 11 percent from January to September. That followed a 12 percent sales decline in 2017, she said, for a total of 23 percent in less than two years.

"We decided we wanted to be proactive and manage the situation so we could reorganize and continue to do just what we have done for years," Whiteley said. "As a company we need to makes smart decisions for longevity."

Company President and CEO Frank J. Glaser said the reduction in Atlantic City visitors and Boardwalk foot traffic since 2006 had forced the company to work hard to cut costs.

"While these efforts made great strides, the plan was not able to deliver the results the company needed," he said in a written statement. He said Chapter 11 protection will enable the company to return to a profitable position.

Save money on holiday shopping with these simple tips

Save money on holiday shopping with these simple tips

How to be a savvy shopper amid Cyber Monday hype

Besides recognizing FOMO, here are other ways to be a savvy shopper on Cyber Monday, which is the Monday after Thanksgiving. Also, check out more of the week's best money tips from experts.

What's in your wallet? If you're a Capital One customer, it might soon be more money.

When someone says they’re in the market for a new home, that can have various meanings, as many prospective home buyers are clearly not lookin…

US jobless rate sinks to 4.2% as many more people find jobs

WASHINGTON (AP) — America's unemployment rate tumbled last month to its lowest point since the pandemic struck, even as employers appeared to slow their hiring — a mixed picture that pointed to a resilient economy that's putting more people to work.

Amid shortages, Canada is tapping into its strategic reserves. This time, for maple syrup.

A box of strawberry taffy sits on the fourth floor, where taffy is made, at the James Candy Factory on the boardwalk in Atlantic City, on Monday, Aug. 6, 2012. (Press of Atlantic City/Andrew Renneisen)

Levi Fox, creator of tour and tour guide, talks to his tour group on the fourth floor, where taffy is made, in the James Candy Factory on the Atlantic City Boardwalk, on Monday, Aug. 6, 2012. (Press of Atlantic City/Andrew Renneisen)