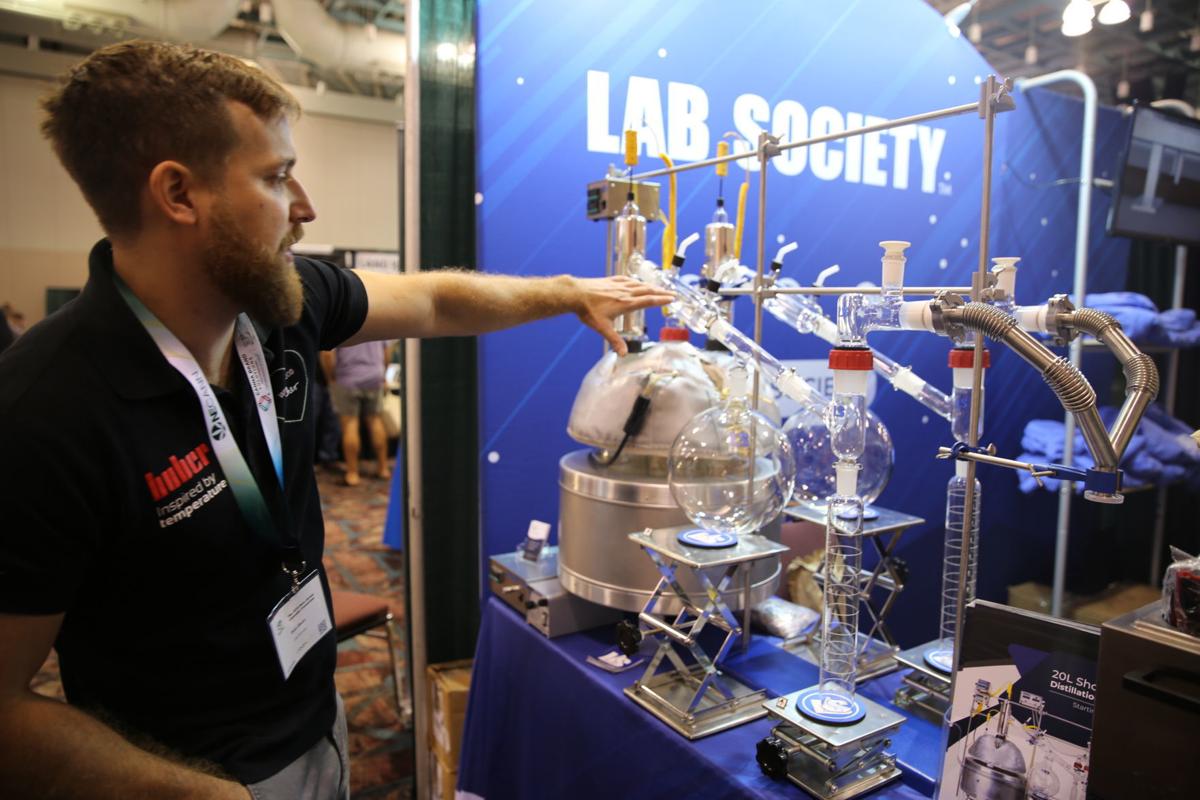 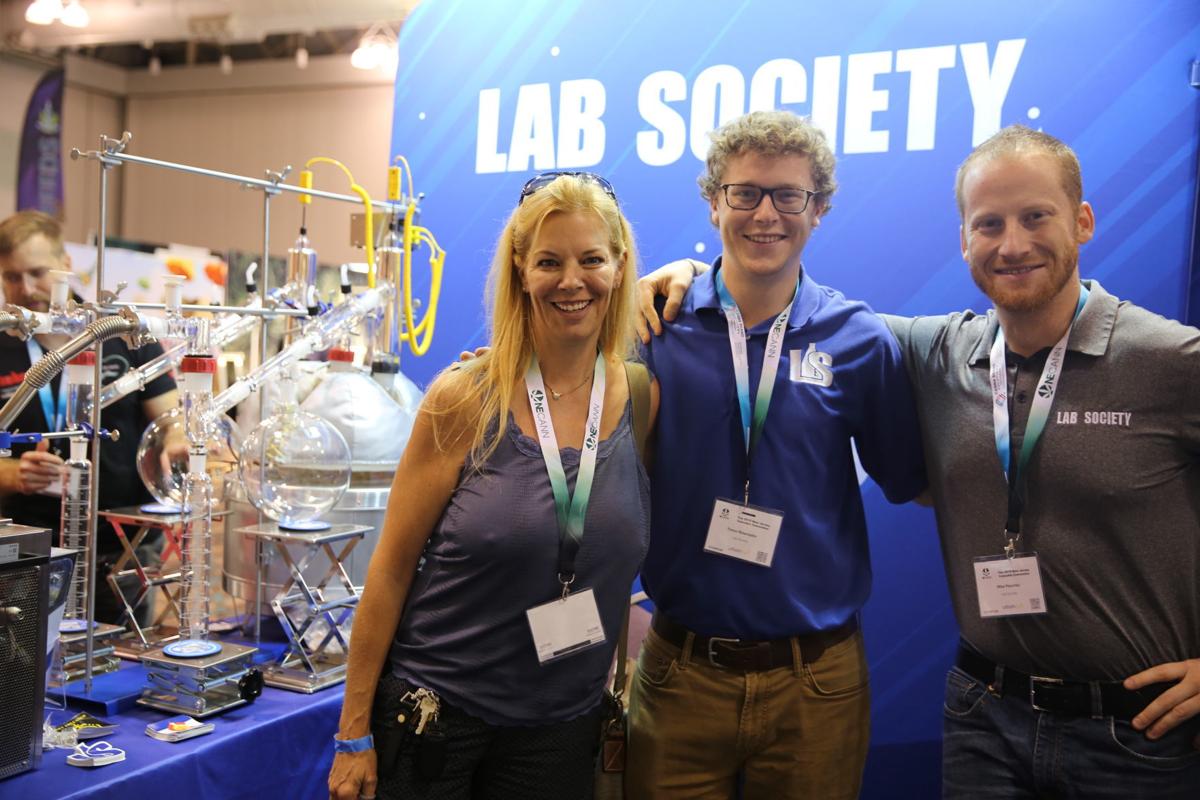 Kim Betesh of Hollywood Smokin' in Northfield and Trevor Rosensohn and Mike Palumbo of Lab Society at the New Jersey Cannabis Convention Sept. 14, 2019 at the Atlantic City Convention Center. 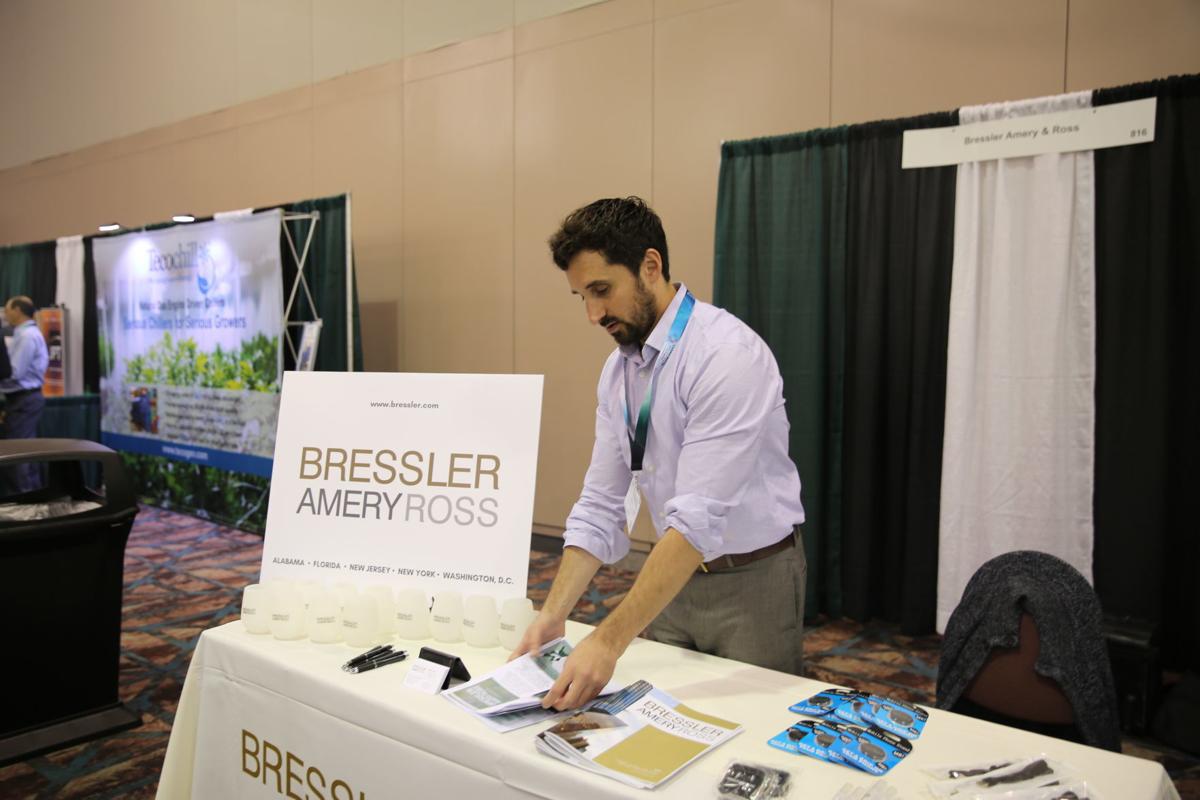 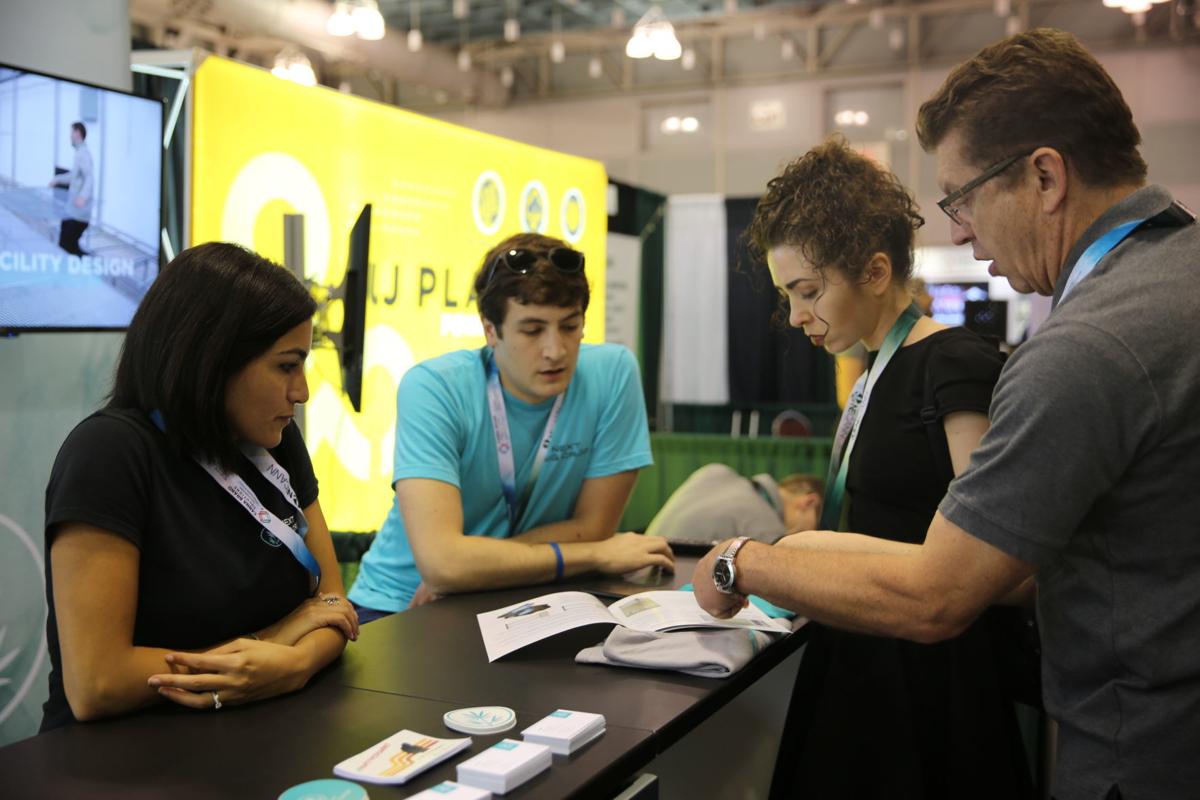 Mali Sanati and Justin Itzkowitz of Next Big Crop discuss their business at the New Jersey Cannabis Convention Sept. 14, 2019 at the Atlantic City Convention Center. 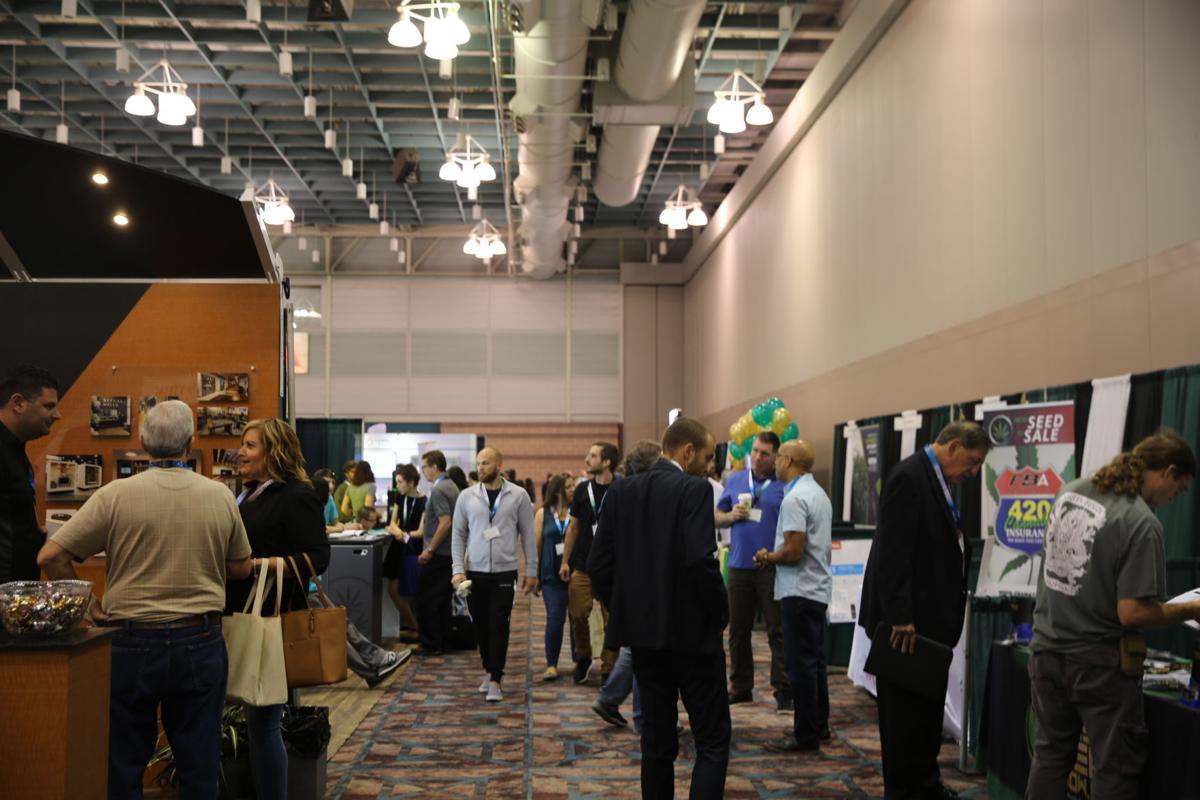 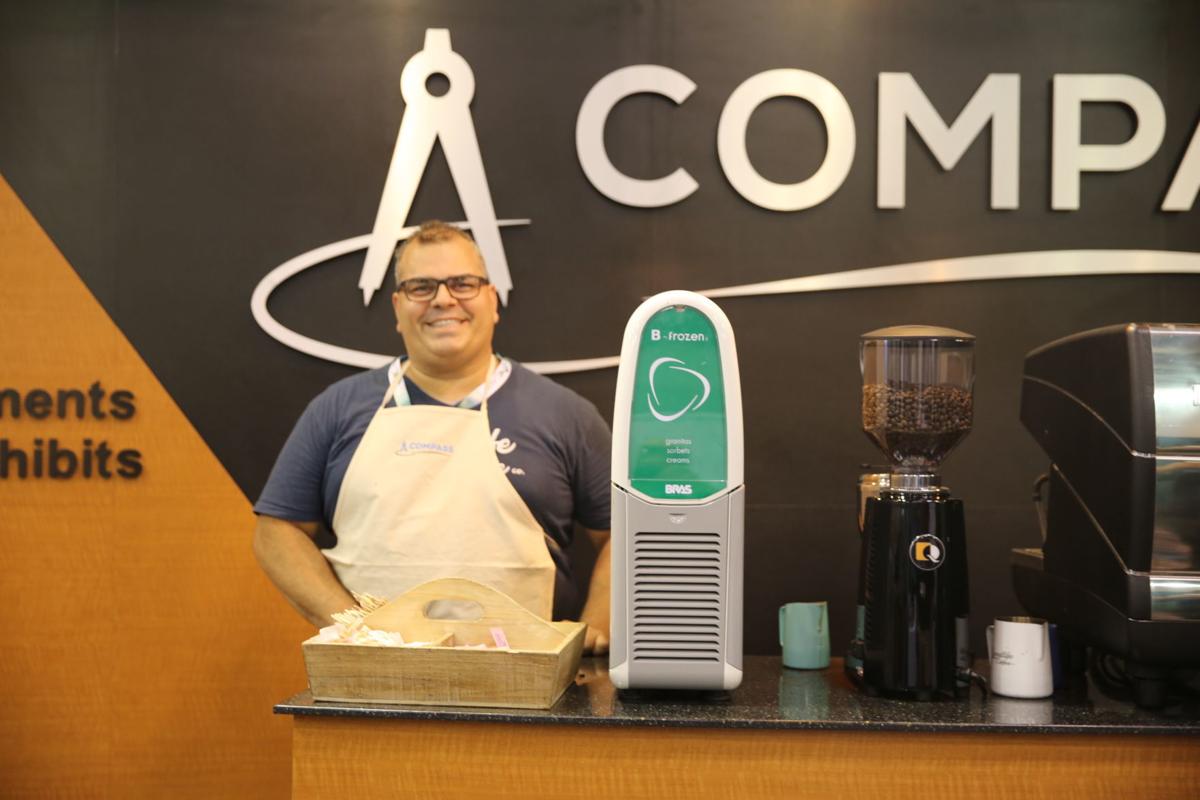 Michael Bonavita of Goodlife Coffee Co. of Red Bank hands out free coffee at the Compass booth inside the New Jersey Cannabis Convention Sept. 14, 2019 at the Atlantic City Convention Center. 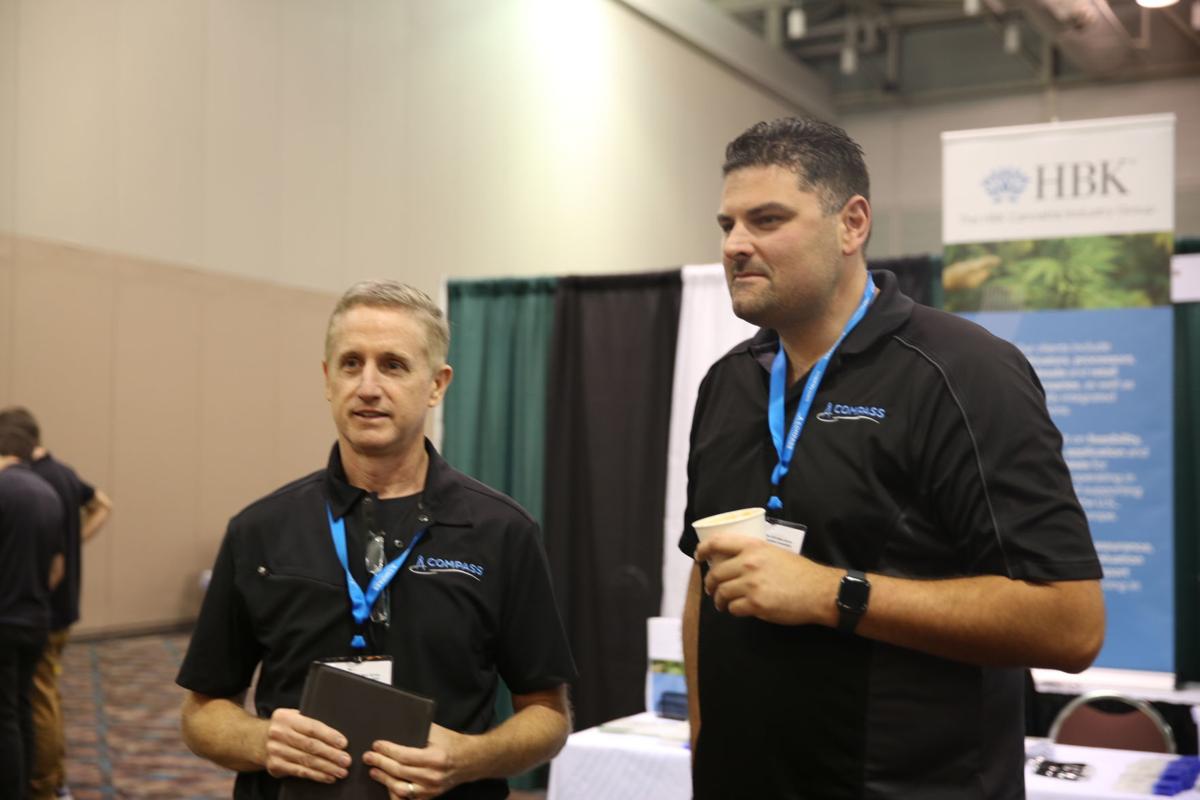 Vince Wilkins and Nick Treantafelo of Compass at the New Jersey Cannabis Convention Sept. 14, 2019 at the Atlantic City Convention Center. 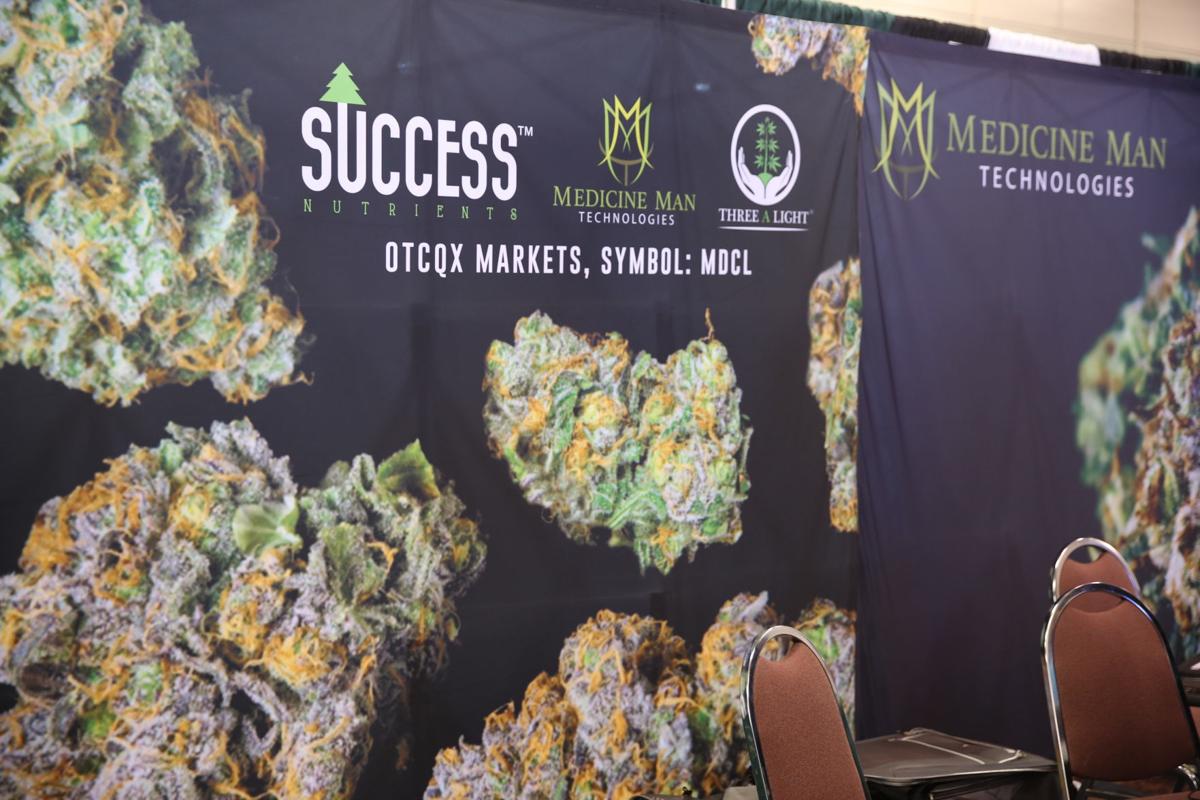 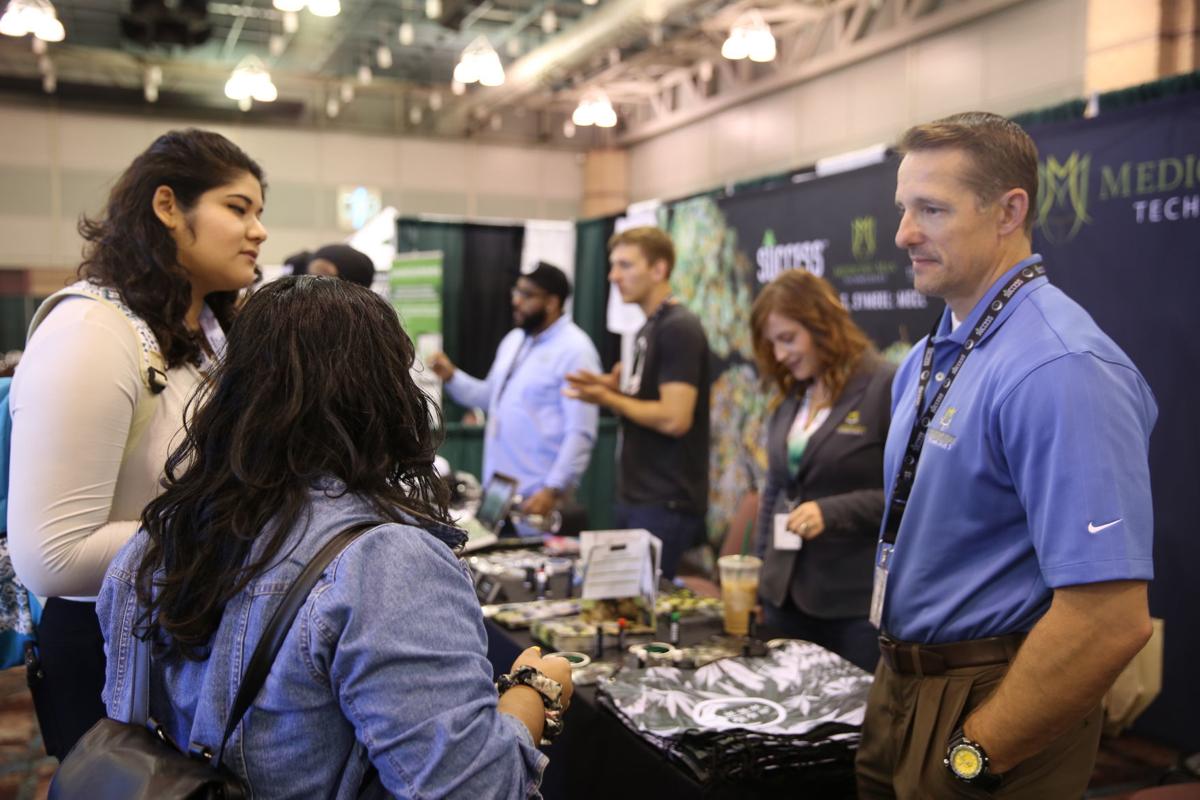 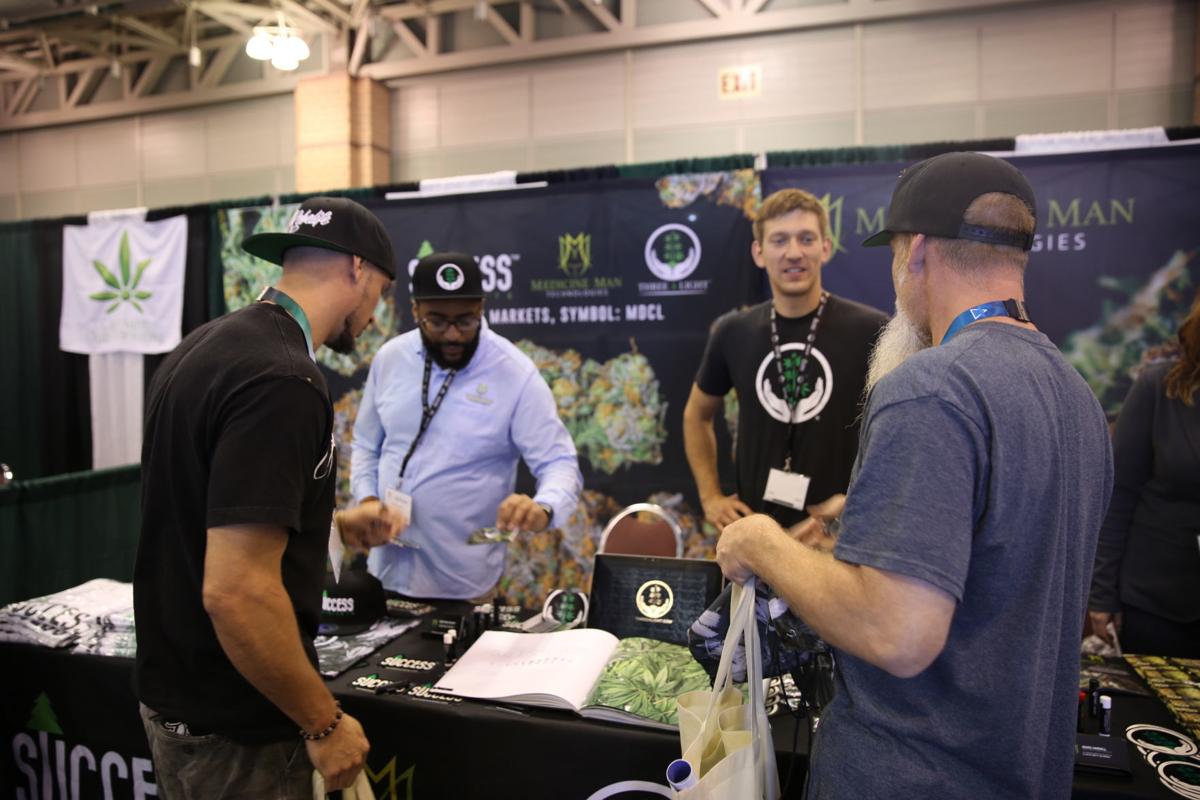 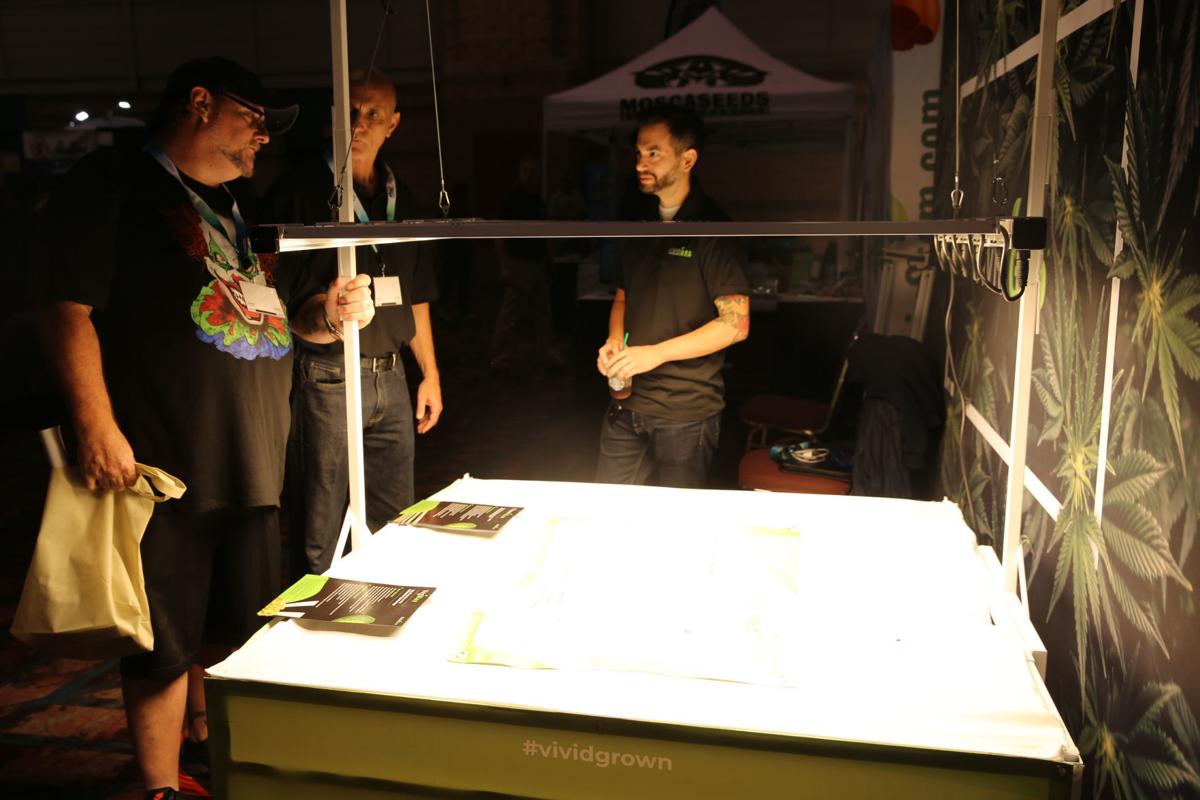 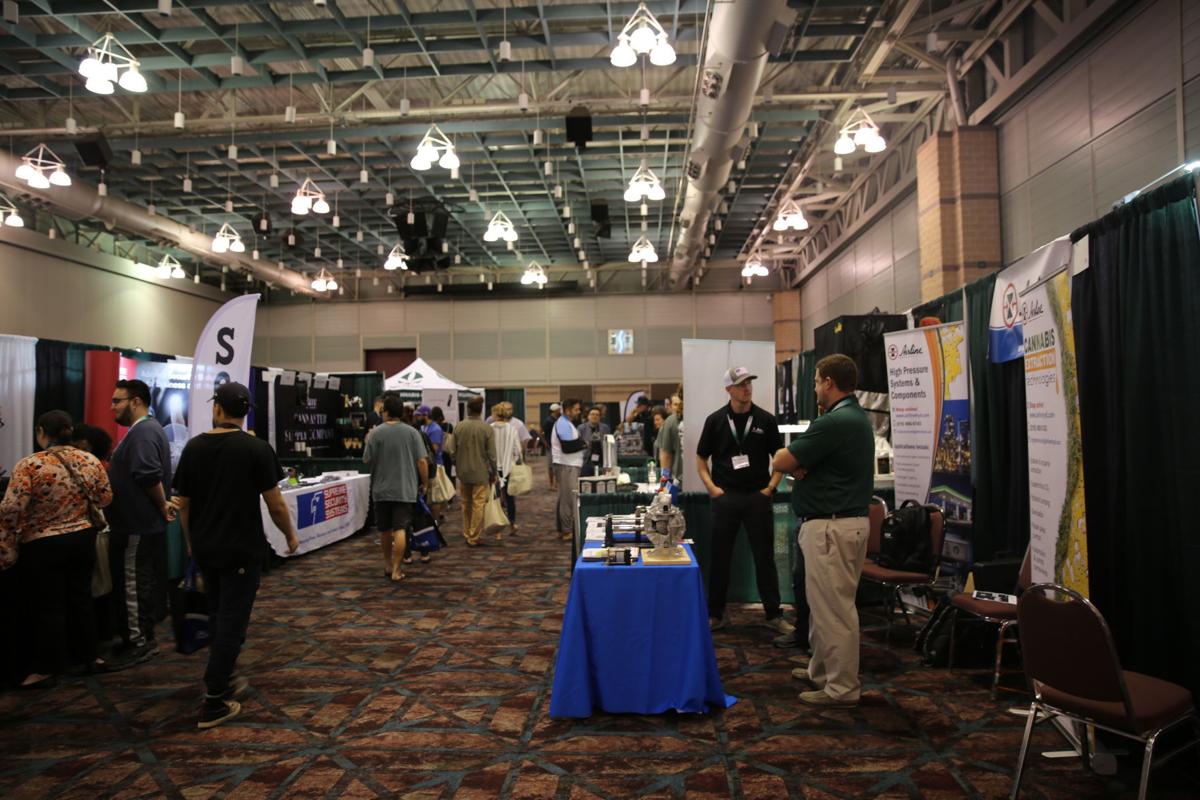 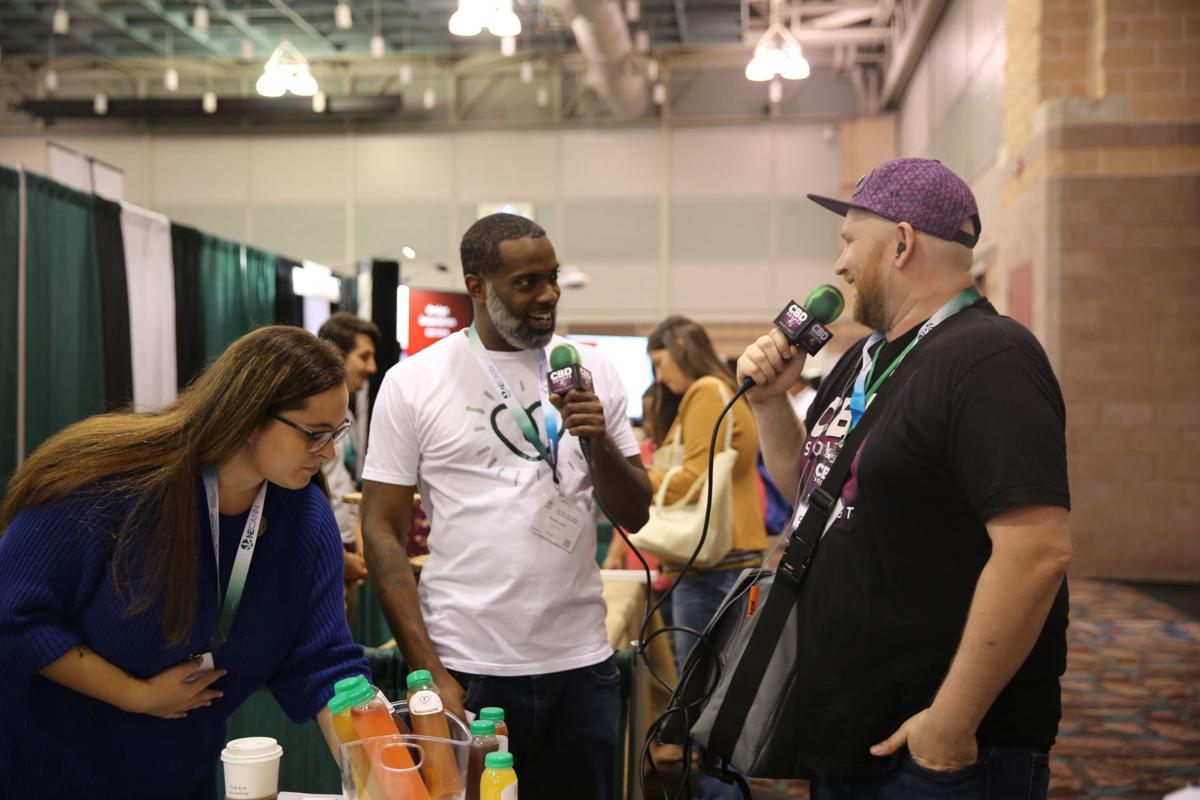 ATLANTIC CITY — If you didn’t know what was happening inside the Atlantic City Convention Center this weekend, you might guess right by the smell of it.

It would be easy to make jokes about Atlantic City hosting the first state cannabis convention if the attendees weren’t so serious about what they do.

“People need to get away from this notion that this is a bunch of potheads sitting around, trying to smoke weed,” said Mali Sanati of Next Big Crop, A General Cannabis Company of Denver. “Everyone is just trying to run their business.”

Sanati was one of the dozens of exhibitors at the two-day convention called NJCANN and billed as “the largest gathering of New Jersey’s medical marijuana industry professionals, and ultimately those looking forward to the eventual adult use recreational market.”

“NJCANN is designed for industry leaders, advocates, healthcare professionals, patients and the canna-curious to come together to learn and meet the people paving the way for New Jersey,” said Marc Shepard, co-founder and president of NECANN.

“With the cannabis industry heating up in the mid-Atlantic, it’s also a timely opportunity for operating and new businesses alike to engage with and learn from consumers, promote their businesses, and promote their products.”

Sanati said she has been to 18 conventions this year and said they try to focus on newer markets like New Jersey where there is potential to grow. Sanati said that her company works in a variety of facets in the industry, from license procurement to designing and building facilities. She said the convention in New Jersey was “good timing” given the upcoming announcement of new medical dispensary licenses.

Sanati said that while there may be resistance to recreational marijuana legalization in New Jersey, it could be helpful to a city like Atlantic City that is dealing with financial concerns and attempting to find a foothold in the economy outside gambling.

“It’s been proven it can be great for a city that’s struggling,” she said. “To us, it’s just like any other business.”

Brian J. Ellis of Bressler Amery Ross law group in Florham Park said his firm, which has been around for more than 40 years, saw the potential in transitioning to cannabis law.

Although New Jersey has failed to take a vote on its bill to legalize pot, medical marijuana continues to expand. Ellis said that legal recreational use can begin to grow, as well, but it will take more education.

The convention was small compared to others that the venue has hosted and more akin to a tech expo than Atlantic City BeerFest atmosphere some might have imagined. True, the theme was “green” and the accents inside the hall were color-coordinated to match, but beyond that initial whiff — and the positive vibes from attendees and exhibitors alike — it was all business.

Milling about the floor, cannabis enthusiasts mingled with lawyers, entrepreneurs and engineers. The scene was eclectic: from middle-aged men sporting low-ponytails, scruffy beards and worn out T-shirts to young professionals in business attire and thick-rimmed glasses.

Nick Treantafelo and Vince Wilkins of Compass based in Philadelphia were enticing conventiongoers to their booth with free coffee, courtesy of Michael Bonavita’s Goodlife Coffee Co. of Red Bank.

Like many businesses that transition into the business of pot, Compass, which designs and manufactures retail fixtures for the marijuana industry, began as a flooring company.

“We saw that there was going to be a growth in marijuana,” Treantafelo said.

Now they are opening their ninth store and have plans for another 40 across the country.

“To me it seems its almost unlimited,” Wilkins said of the industry’s potential growth. “We’ve been amazed at how fast this industry seems to keep growing.”

Bonavita said even coffee can have it’s part in the marijuana business — he sells and promotes CBD lattes.

“We’re trying to show the versatility of CBD,” Bonavita said.

Some familiar faces arrived to the convention Saturday, including Kim Betesh, owner of Hollywood Smokin’ in Northfield and ambassador of Oaksterdam University.

Betesh was handing out cards and looking for businesses to take on interns from Stockton University’s cannabis studies minor. She said she is teaching the college’s internship preparatory course this year.

Betesh was happy to be at the convention but remained skeptical about the future of recreational marijuana in New Jersey.

“Regulations as they are now are too restrictive for small businesses and minorities,” she said of the proposals.

Betesh said she would like to see more local officials get on board with legalizing recreational marijuana and making it easier for local residents to cash in.

“We should wake up Atlantic County government officials. It’s going to be here anyway, so why restrict the locals?” she said.

GALLOWAY TOWNSHIP — Stockton University is looking for vendors and employers to participate in its first N.J. Cannabis Career Fair and Busines…

Kim Betesh of Hollywood Smokin' in Northfield and Trevor Rosensohn and Mike Palumbo of Lab Society at the New Jersey Cannabis Convention Sept. 14, 2019 at the Atlantic City Convention Center.

Mali Sanati and Justin Itzkowitz of Next Big Crop discuss their business at the New Jersey Cannabis Convention Sept. 14, 2019 at the Atlantic City Convention Center.

Michael Bonavita of Goodlife Coffee Co. of Red Bank hands out free coffee at the Compass booth inside the New Jersey Cannabis Convention Sept. 14, 2019 at the Atlantic City Convention Center.

Vince Wilkins and Nick Treantafelo of Compass at the New Jersey Cannabis Convention Sept. 14, 2019 at the Atlantic City Convention Center.