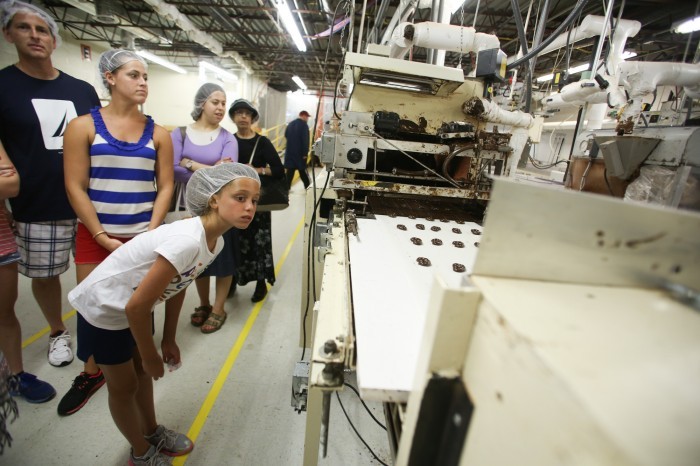 Kaila Scarpa, 8, from Vineland, gets a closer look at chocolate covered pretzels as they glide past on the conveyor belt on the second floor of the James Candy factory. 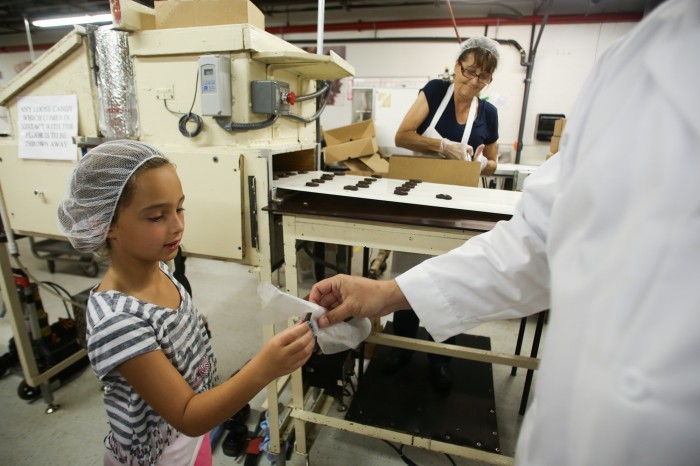 Kate Stockbridge, 8, gets a taste of a chocolate covered pretzels as fresh off the conveyor belt on the second floor of James Candy Factory 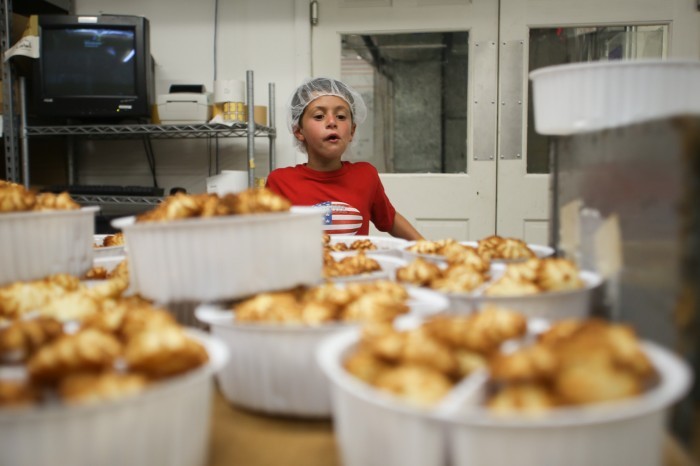 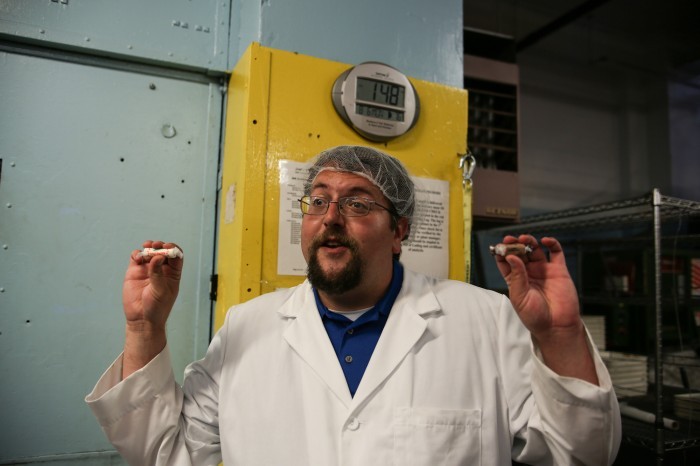 ATLANTIC CITY — Nobody wants to see how the sausage is made, but the opposite is true of candy.

Shops such as Shriver’s Salt Water Taffy in Ocean City for years have put their candy-making operations on display, with fudge cauldrons in the front windows and glass partitions for its taffy kitchen.

This summer, sister company James Candy in Atlantic City, which is owned by the same family, is taking this a step further with guided tours of its four-story factory on the New York Avenue Boardwalk.

In the back of the Boardwalk shop familiar to most customers is a commercial operation that rivals Willy Wonka’s, complete with a dark-chocolate waterfall — albeit a tiny one.

For a $2 admission that is good toward the price of a candy purchase, customers can sign up for daily half-hour guided strolls past workers and machines that pull, cut and wrap the taffy pieces and an elaborate network of conveyors that carry naked pretzels or dried fruits through a waterfall of dark chocolate and into a 100-foot chiller tunnel that prepares them for packaging.

Each floor of the factory is full of the aromas of its products. The chocolate floor is awash in chocolate. The taffy room smells like bananas and other fruit flavors.

And while there is no dragon boat to ferry passengers along a chocolate river, there is a commercial freight elevator to transport visitors from floor to floor.

Atlantic City’s first family of sweets believes the tour will be a family hit in a city that could use more nongambling attractions.

“People say Atlantic City draws an adult crowd. That might be true of Friday and Saturday nights, but during the week there are a lot of families on the Boardwalk,” owner Frank Glaser said.

The family business, which includes Fralinger’s Salt Water Taffy, specialized in taffy until it bought out Bayard’s Chocolates in 2004 and incorporated chocolate-making into its Atlantic City factory.

With 200 employees and 12 retail locations, the company is a serious candy competitor.

“I’ve been here 40 years, and people are always asking me, ‘Can I see how it’s made?’” Glaser said. “It would take 20 minutes to an hour. Everyone always liked it.”

The company hired Levi Fox, of Somers Point, an adjunct professor at the Richard Stockton College of New Jersey, who created the program for the tour and serves as its summer tour guide.

Fox has experience in this field, having served as a docent for Margate’s Lucy the Elephant.

The factory added display cases and put up poster-size historic photographs the length of the tour route depicting the factory operations from the 1900s. And they marked the tour boundaries with red tape to discourage individual exploration.

Whitley-Glaser said they had to make very few physical changes to get the factory ready for a public tour. Since launching in July, the tour is averaging about 75 people per day.

Are they worried about accidentally divulging any secrets? Not really, she said.

“It’s pretty transparent. We tell you about 99 percent of how it’s made,” she said. “We have little things we do we might keep to ourselves.”

The walk concludes with a stop to watch the company’s chocolatiers, who still make some of the treats by hand. Mariella Majia, of Atlantic City, spent one afternoon whipping white chocolate in preparation for making bars of brittle.

Boxes of taffy were among the island’s first tourist souvenirs 100 years ago, when James and its then-competitor Fralinger’s offered take-home treats in tiny barrels and oyster boxes.

Today, the company does a brisk mail-order business to customers and retailers alike. The store distributes 200,000 catalogs across the globe each year. The company has automated some of its operations, such as the taffy pulling, which workers used to do by hand using a steel hook affixed to the wall.

But much of the machinery remains the same, feeding the pulled taffy through an extruding machine that shapes, cuts and wraps it in one fluid movement, throwing the finished bite-size pieces into bins at a rate of 500 per minute.

The tour is expected to add to Atlantic City’s nongambling attractions, which the nonprofit Atlantic City Alliance has been promoting all year in its national “Do AC!” campaign.

“That’s the beauty of Atlantic City: You can find something to interest everyone,” alliance spokesman Jeff Guaracino said. “One night you’re here for a bachelor party. The next day, you’re here with your nieces and nephews. It’s a different experience depending on which road you follow.”

Guaracino said the candy tour contributes to the alliance’s goal of giving people too much to do in a single visit so they are eager to return.

“The more we show people how much there is to do, the more reason they have to come back,” he said.

Linda Lazarus, of Rockland, N.Y., and her two daughters, Tova and Aliza, gave the tour high marks. They made a point to put it on their vacation itinerary when they saw it on Atlantic City’s travel website.

“The taffy room smelled incredible,” Lazarus said. “They should make an air-freshener out of it.”

How to have financial flexibility

How to beat your summer ‘revenge shopping’ debt

If your summer of “revenge” spending has come for a payback of its own in the form of lingering debt, make a plan for paying it off. Also, check out more of the week's best money tips from experts.

Is the program's impending financial doom just a rumor, or reality?

Use of OxyContin profits to fight opioids formally approved: Briefs

EGG HARBOR TOWNSHIP — Thirteen South Jersey residents who were recently hired by Global Crossing Airlines, aka GlobalX, to serve as its first …

Either or both of these flexible, pet-friendly Margate condos can serve as vacation digs and/or a source of rental income

For the buyer in search of an affordable, income-generating property that can also be used as a convenient Jersey Shore vacation place (or, fo…

SEOUL, South Korea – South Korea has reported more than 2,000 new cases of the coronavirus, nearing a one-day record set last month, continuing an alarming surge as the nation enters its biggest holiday of the year.

Kaila Scarpa, 8, from Vineland, gets a closer look at chocolate covered pretzels as they glide past on the conveyor belt on the second floor of the James Candy factory.

Kate Stockbridge, 8, gets a taste of a chocolate covered pretzels as fresh off the conveyor belt on the second floor of James Candy Factory