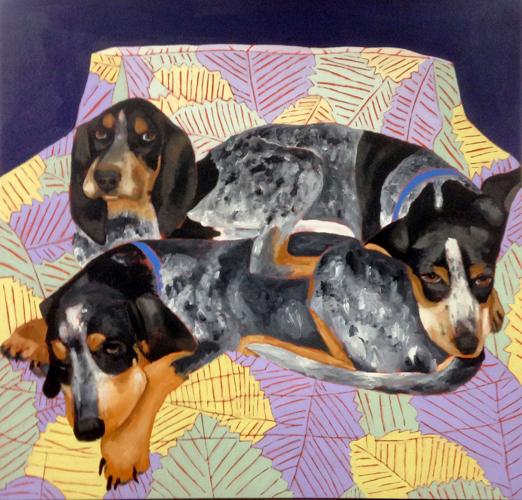 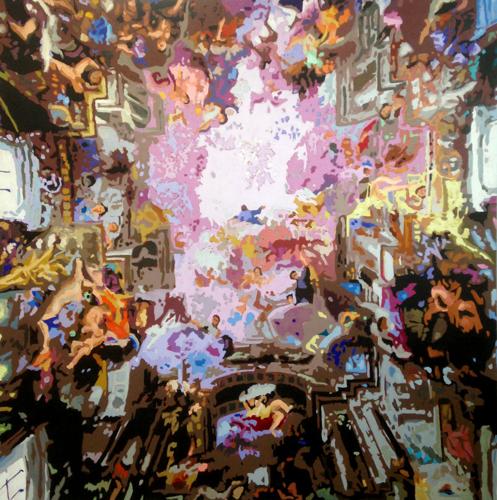 Jay McClellan's take on the ceiling at St. Peter's in Rome. 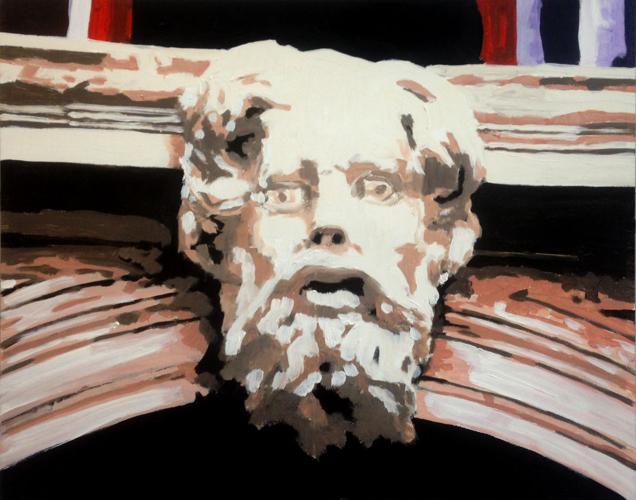 A random statue on a wall in Rome

“I have a deep connection to my dogs and the dogs in my paintings,” states McClellan, who strives to keep a sense of sentimentality in each dog he paints. “When I paint, the dog is front and center. It’s like, look at this dog, this dog is important. I paint a dog in kind of in the same vein as a traditional portrait — the head and shoulders are front and center, everything is pushed to the front of the plane.”

McClellan, who has a show at Beacon Shortwave Art Gallery in Stone Harbor 7 p.m. Friday, June 12, has become quite renowned for his cool and colorful, large-scale paintings of dogs frequently portrayed sprawled out in a chair. But it didn’t start out that way.

His mother’s death from pancreatic cancer in 2003 prompted him to leave a career in advertising to “live as an artist.” So he went back to school and began creating very object-oriented paintings of flat graphic chairs — but empty chairs.

“A good friend of mine suggested that I was representing the loss of my mother with the empty chair,” he says. “He told me everything is so bold and graphic, but I’m losing the sentimentality. He asked, why not paint the present and life? I had two dogs, Tip and Honey, and from then I’ve been painting dogs.”

McClellan received his BFA from Memphis College of Art and an MFA from the Pennsylvania Academy of the Fine Arts, a very traditional school. Despite his training, he uses a more contemporary approach to painting and says that his process is similar to that of a printer and moves “objects back and forth on the canvas’s two-dimensional plane, juxtaposing bold colors with graphic pattern and unique designs” to create exciting visual combinations.

While his popular dogs will be at Beacon Art during the run of the show, as well as be seen at White Dog Cafe Restaurants in University City and Haverford, viewers will also get the chance to see McClellan’s newest work created after a recent trip to Italy.

Most of the work in the Stone Harbor is from a recent trip to Italy — but don’t look for your quintessential images of famous Italian buildings or scenery.

“Just things that caught my eye. I’d see this thing that I’m not used to and I’d want to project that. That’s the process for me. You see these things that others may take for granted, because they’re in their life a lot and see them all the time, so they don’t think about it. But I’d walk around and there’s this piece and I’m like, damn, it’s been there for years. Somebody made this. It should be recognized.”

McClellan is frequently commissioned to paint other people’s dogs, as well as cats, such as the one he did for Philadelphia Phillies’ second baseman Chase Utley. But he will probably be the first to admit that dogs are his domestic animal of choice.

“A lot of times, when I paints other people’s dogs, I’m connected to that emotion and see how others are connected to their dog — that’s why I love painting them so much.”

He will not bring his three dogs to the show at Beacon, though, simply because it becomes too difficult to talk with guests if they’re in attendance. But he encourages others to bring theirs or even just pictures of them and come up to chat with him about them.

When: Throughout the summer

The Art of John Lennon exhibit at Ocean Galleries

Perhaps the greatest irony of John Lennon’s life was his death.

If you ask Barbara Pitt why she didn’t become a full-time artist years ago, she’d openly admit that she didn’t have the nerve.

From classic to ‘not your grandmother’s’ pearls

Two things may come to mind when one ponders the pearl: it’s the birthstone for the month of June and it is the only precious gem to come from…

Being raised in the middle of nature — a farm to be more precise — provided artist Judith Saylor Allison with a “great respect for it.”

Cape May artist strives to capture colors in natural light

For plein air artists, trying to produce natural light and colors on canvas is an ever-challenging race against the clock.

Small waves now, but the season is coming

Surf’s up, dudes and dudettes!

Jay McClellan's take on the ceiling at St. Peter's in Rome.

A random statue on a wall in Rome