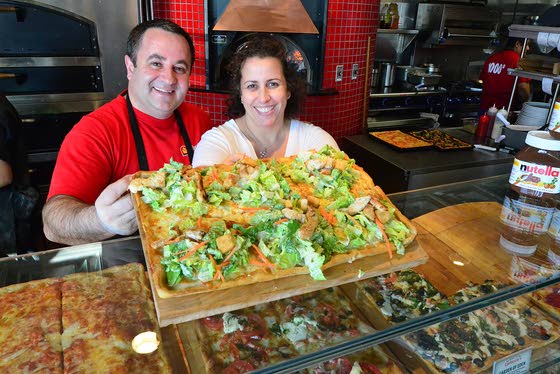 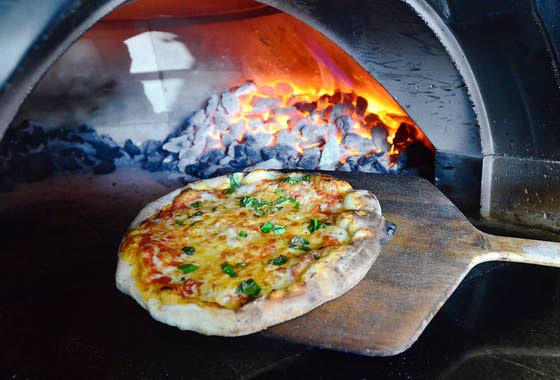 Carlo Citera recently opened Carluccio’s Coal Fired Pizza at the former Dunkin’ Donuts in Northfield. The place has been totally remodeled and it is the only place in South Jersey that has coal fire ovens. 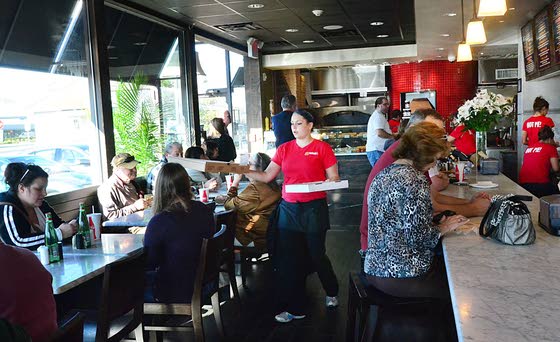 Carluccio’s was completely remodeled to give it a rustic Italian feel, with marble countertops and distressed woods.

Add Carluccio's Coal Fired Pizza to the list of good ones.

Carlo Citera knows a thing or two about making pizza. Born and raised in Salerno, Italy, he eventually came to the Untied States and has owned several pizza spots throughout the area, including Cosmo's inside the former Ocean One Mall in Atlantic City - now called The Pier at Caesars - as well as Cosmo's Food Court on the Atlantic City Boardwalk.

He was enjoying great success with his small - but money-making - Cosmo's at Trump Marina. But when the Golden Nugget took over, Citera says he was asked to leave.

"It wasn't anything about our business," he says. "They took over and decided to get me out of there because they just want to do their own thing everywhere on that property. I would have never left."

When Golden Nugget forced his hand, Citera began to look for a new location. And when the Dunkin' Donuts in Northfield - a place Citera frequented - moved up the street from New Road to Tilton Road, he decided that would be the location for his latest venture.

"I used to stop there for coffee basically every day," Citera says. "I thought it was a great location with unbelievable visibility. So others were bidding on it and I jumped in and got it."

Since opening the restaurant with his wife Tina and executive chef Michael Laurenza, the only problem they have is that they are too busy.

"We never expected the business we are having," he says. "The only problem is we might not be big enough. But that's a good problem. We really wish we had some more seats, some more parking and a bigger kitchen. But it's been great."

It seems the mainland was looking for a great pizza place that also had a little something different to offer: coal-fired pizza.

But what is coal-fired pizza?

According to Citera, stacks of coal are placed in his brick oven and set on fire, resulting in temperatures of 800 to 1,000 degrees. There is no dial to control the temperature. It's a process that must be learned and perfected.

"It was a concept I picked up in Orlando when I went to Anthony's Coal Fired Pizza," Citera says. "I just thought it was great. You can cook a pizza and it's done in 20 to 30 seconds. It's well done but done well."

The coal-fired pizza starts at just $7 for a 12-inch pie, and goes up to $14. There are a variety of styles, ranging from four-cheese to bruschetta to chicken Caesar salad to Carluccio's Way: fresh broccoli rabe, sausage, mozzarella, caramelized onions and roasted peppers.

But Citera also wanted to continue to offer the pizza he became famous for. So he also installed a traditional oven so that he could make his thin-crust Sicilian pies ($12 to $16) that are some of the best Sicilian pies in South Jersey. The famous Grandma's Pie features chunky tomato sauce, fresh mozzarella, extra virgin olive oil, basil and oregano. And it's hard not to be tempted by the bacon ranch, chicken ranch or the Southwestern with coal-fired chicken, chopped peppers, onions, tomatoes, mozzarella, ranch dressing and BBQ sauce.

"I wanted to fuse the two concepts," Citera says. "It was important to offer something new, but it was also important to make sure we had pizza for people if they might not like the coal-fired pizza or just didn't want to try it."

"We have great arancini ($7), and we are known for our eggplant rollatini ($7)," Citera says of the affordable menu. "Our wings ($9 for 10, $16 for 20) are amazing. They are finished in the coal-fired oven to make them crispy and tossed in extra virgin olive oil, lemon, garlic and rosemary. Once you have these wings, you will change your mind about wings forever. We also do our own broccoli rabe and make our own chicken cutlets. We use good, quality pasta. Nothing is frozen; we don't believe in that. We get produce deliveries and other deliveries every day. It's all fresh. It's the only way."

Citera says once things settle at the new restaurant, he wants Laurenza to have fun with the menu.

"He's a great chef," Citera says of Laurenza, who has worked in a variety of area restaurants, most notably the former Italian restaurant at Harrah's Resort, Polistina's. "We had fun making this menu up, but I eventually want him to experiment and show people what he can do with some different dishes and specials every day, whether it's entrees or pizza or appetizers."

For now, Citera is enjoying his only problem of pleasing too many people who want to try his new place.

"We did 600 to 700 pies last Friday night; there was a two-hour wait," he says. "And sometimes people are getting mad. But we are doing our best. I was told by people that South Jersey wasn't ready for coal-fired pizza. And I proved that wrong."

Other than the pizza, which is a must-have, there are plenty of other reasons to go to Carluccio's. For appetizers, try the arancini ($7 for two), the eggplant rollatini ($7 for two) and coal-fired wings ($9 for 10, $16 for 20). On the sandwich side, the South Philly ($7) offers steak or chicken with onions and American cheese; the Prosciutto ($7) bulges with fresh-sliced prosciutto, mozzarella, roasted peppers and balsamic drizzle, and the Perky Turkey ($7) with provolone, sun-dried tomatoes and roasted garlic mayo won't disappoint. On the pasta side, you can't go wrong with Carluccio's Special ($10), sauteed broccoli rabe with garlic and oil with Italian sausage and cannellini beans; or the gnocchi al Forno ($9) baked with Bolognese sauce, melted mozzarella and parmesan cheese. There's also awesome traditional Italian entrees ($15) such as chicken parm and veal marsala. Save room for dessert: the Nutella Bella ($4) is a pocket of baked pizza dough filled with Nutella spread, a favorite of the kids.

Owner Carlo Citera hired one of the best design companies in the Northeast when he chose Das Architects, a Philadelphia-based design group known for creating restaurants that include Philadelphia's Le Bec-Fin and Morimoto. The firm turned a tired and old Dunkin' Donuts into a rustic Italian restaurant with marble, distressed woods and photos of Italy. The open kitchen allows customers to witness what a coal-fired oven is all about. And counter seating remains to give the restaurant a casual, fun feel.

BETWEEN YOU AND ME: Owner Carlo Citera is so passionate about his new business, he has been there open to close every day since they opened three weeks ago. And he says he won't be cutting back on those hours anytime soon.

Our biggest topic for today’s column and those of October is most definitely the planet Mars.

Carlo Citera recently opened Carluccio’s Coal Fired Pizza at the former Dunkin’ Donuts in Northfield. The place has been totally remodeled and it is the only place in South Jersey that has coal fire ovens.

Carluccio’s was completely remodeled to give it a rustic Italian feel, with marble countertops and distressed woods.